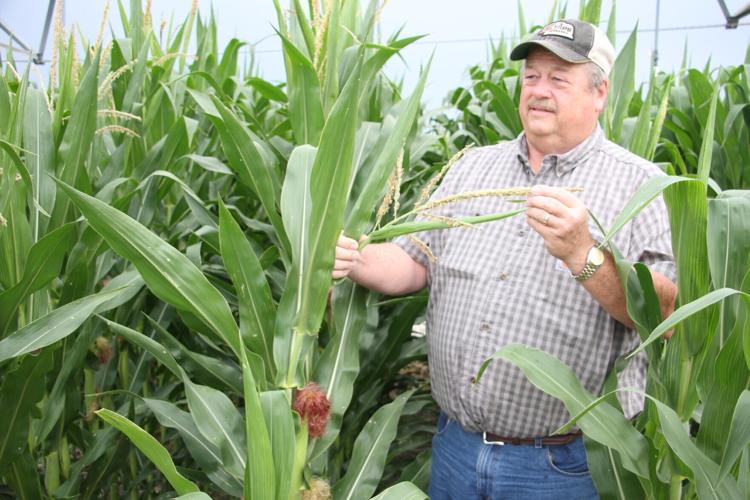 Randy Lloyd, research facility coordinator at West Central Research, Extension and Education Center in North Platte, describes how pollination works in corn. The tassel is the male part of the plant and the ear is the female. Detasseling ensures corn is pollinated by a different plant, which produces a hybrid that is stronger than the two parent plants. 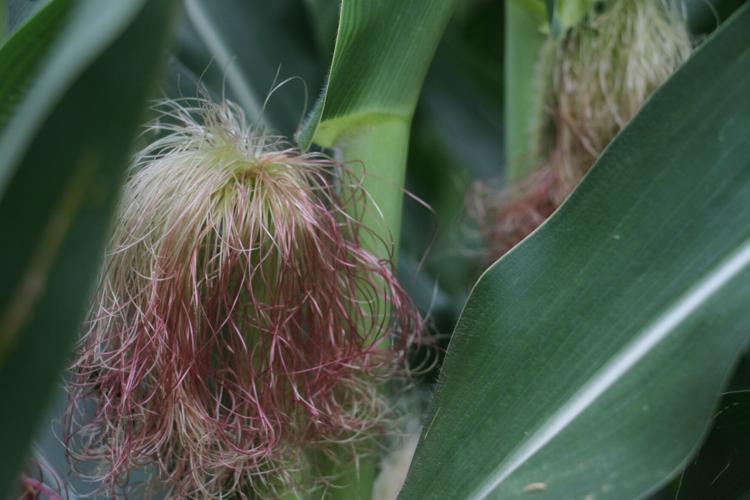 Silk is the transporter of pollen to the individual kernels in a cob of corn. Once the kernel is fertilized, the silk turns brown and falls off the plant. 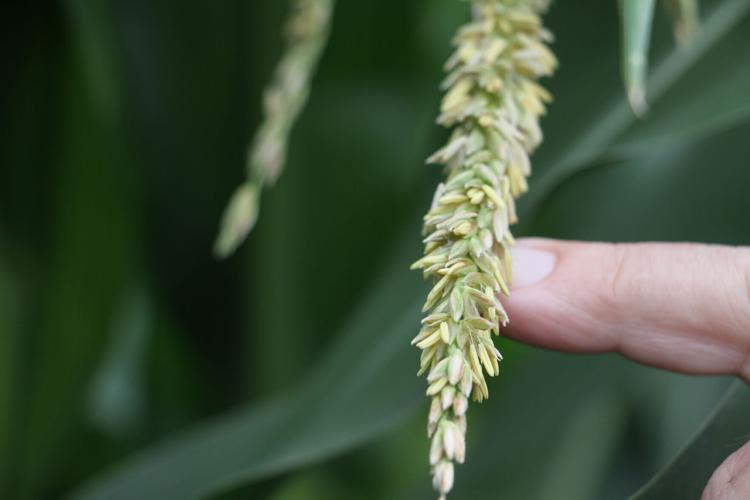 Tassels contain approximately 1,000 individual spikelets and each one bears two florets encased in two large glumes. Each floret contains three anthers, inside of which is the pollen.

NORTH PLATTE — Across Nebraska, corn tassels wave in the breeze as the crop moves toward pollination and on into harvest.

Managing that pollination specifically for seed or field corn determines the quality for the following season. Randy Lloyd, research facility coordinator at West Central Research, Extension and Education Center in North Platte, said getting the most out of the harvest depends on a lot of factors, one of which is hybridization.

Hybrids are a cross of two parents to create a new, stronger seed. Corn that self-pollinates — inbred — Lloyd said, is not high producing or high quality.

“When you cross dog breeds or whatever it is, you get what they call hybrid vigor, which means the offspring is stronger than the parents,” Lloyd said. “That’s why sometimes you get these purebred dogs that have all these problems like hip (dysplasia) and such.”

A similar situation occurs with corn, Lloyd said, in that hybrid corn is much stronger because the best DNA from each plant is combined to produce stronger seed.

“Back in the late 1800s, farmers just grew their corn,” Lloyd said. “The pollen (interacted) with whatever was around it and the seed developed on the ear and that’s what they collected.”

What geneticists found is there is an inherent improvement when you cross two parents — creating hybrid seeds.

“Corn is really a neat plant, because you can hybridize it so easily,” Lloyd said.

To make hybrid strands, farmers and researchers have to separate male and female plants. The tassel is the male part of the plant and the ear is the female. Detasseling a plant ensures a female plant, Lloyd said.

“What farmers will do is they will plant typically two or four rows of male and then upwards of eight rows of the female,” Lloyd said. “They’ll put them side by side through the field and you’ll see them alternate like that.”

In hybridization, the farmer wants to ensure the proper pollen is being used and that is the reason for detasseling, so the plants can’t self-pollinate.

“Historically, detasseling was all done by hand,” Lloyd said. “Certainly in Nebraska where a lot of seed is produced in that Doniphan, York area, I’ve heard stories of multi-generational detasselers.”

The industry has developed some mechanical ways to detassel as well.

Corn production in the United States from the 1870s to the mid-1930s was mostly static. The average yield was about 25 bushels per acre.

“A lot of the reason was, one, we didn’t need that much corn back then,” Lloyd said. “If you think of what was available from a farming perspective — we had no equipment, we had no fertilizers, we had no herbicides, we had nothing.”

The way farmers collected seed for the next year in the early days of field corn production was to walk their fields and pick out what appeared to be the healthiest-looking ears.

“That was their selection for seed and it was all open pollinated,” Lloyd said. “They planted it, the pollen came from this field, and it just pollinated whatever plant was ready to receive pollen.”

“(Hybridization) really didn’t catch on that much with farmers until the Dust Bowl,” Lloyd said.

Farmers saw yields going up due to drought-tolerant hybrids that were being developed at the time.

“For a little while there, we started gaining about .9 bushels per acre until about the mid-1950s,” Lloyd said. “Then in the mid-1950s there was kind of an explosion of both technology and genetics, so we really started focusing on hybridization.”

Along with continuing to improve hybrid seeds after World War II, Lloyd said equipment got better, fertilizers got better and herbicides came into the picture. Since that time, the way science manages genetics is improving each year.

“Almost 95%-plus of the corn today is hybrid corn,” Lloyd said, “and the reason detasseling hybrid corn is important is for control that improves the quality of the corn.”

Tassels have begun to show at the tops of corn around the area. Lloyd said the tassel, if it’s a good tassel, will have anywhere from 2 million to 5 million pollen grains. As the ear develops, it will have small kernels on it and it starts sending out silks.

“It always starts at the bottom,” Lloyd said. “These (silks) are going to start to elongate up through the husk and then they’re going to come out the top of the ear.”

Once the kernels are pollinated, the silks drop off.

“If you have 30,000 plants per acre, which is a typical population,” Lloyd said, “you’re getting 2 to 5 million pollen grains per tassel. That’s why when you come out of the fields you’re covered in pollen, because there’s so much of it.”

With farmers paying almost $300 a bag for seed corn, Lloyd said, the farmer wants to be sure what he is purchasing is pure and gives him the best opportunity to produce a quality crop. Field corn is big business and companies work with farmers directly.

“Typically a company will go to the farmer and say, we want you to grow this seed in your field and when you harvest it we want the seed,” Lloyd said. “They’ll take it back to their plant, clean it, do whatever they have to do to it, treat it and put it in a bag. This is almost all contract work.”

The companies are particular about the types of herbicides, fungicides and fertilizer used to produce the crop.

“Typically the company will send out a consultant to go look at the field several times during the year to make sure things are going well,” Lloyd said.

For a day or two every year, a local farmer sets aside his usual farming routine to delve into science. Dan Fitts stands on his mint still to …

Women have historically played a critical role on the farm and ranch. They are powerful by impacting the agriculture industry as farmers, ranc…

Demand for organics increased so much that it began outstripping the supply produced in the U.S. Now a new challenge has emerged: convincing enough farmers to grow organic.

This article is one of a six-part series on the dams, reservoirs, power generation and some diversion dams located on the North Platte River. …

Nebraska crop progress and conditions for the week ending Sept. 11 show there were 5.9 days suitable for fieldwork, according to the USDA’s Na…

WYOMING – The Bureau of Reclamation will be lowering the water level at Guernsey Reservoir as the 2022 irrigation season draws to a close.

Randy Lloyd, research facility coordinator at West Central Research, Extension and Education Center in North Platte, describes how pollination works in corn. The tassel is the male part of the plant and the ear is the female. Detasseling ensures corn is pollinated by a different plant, which produces a hybrid that is stronger than the two parent plants.

Silk is the transporter of pollen to the individual kernels in a cob of corn. Once the kernel is fertilized, the silk turns brown and falls off the plant.

Tassels contain approximately 1,000 individual spikelets and each one bears two florets encased in two large glumes. Each floret contains three anthers, inside of which is the pollen.