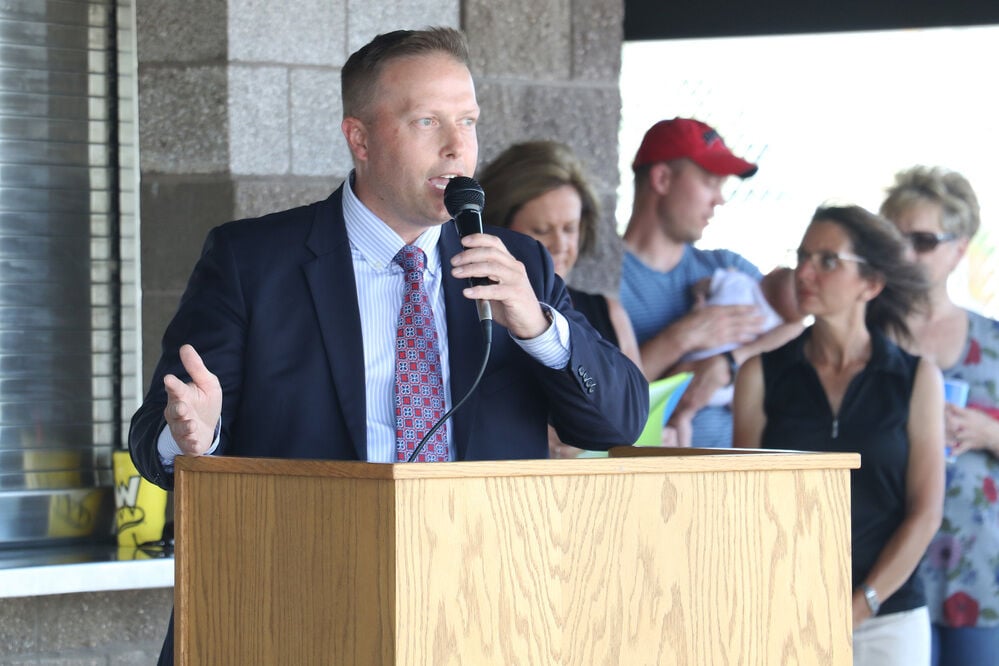 Mayor Tony Kaufman spoke on behalf of the City of Gering and its council members at the dedication ceremony. He thanked everyone's hard work on the years-long project. 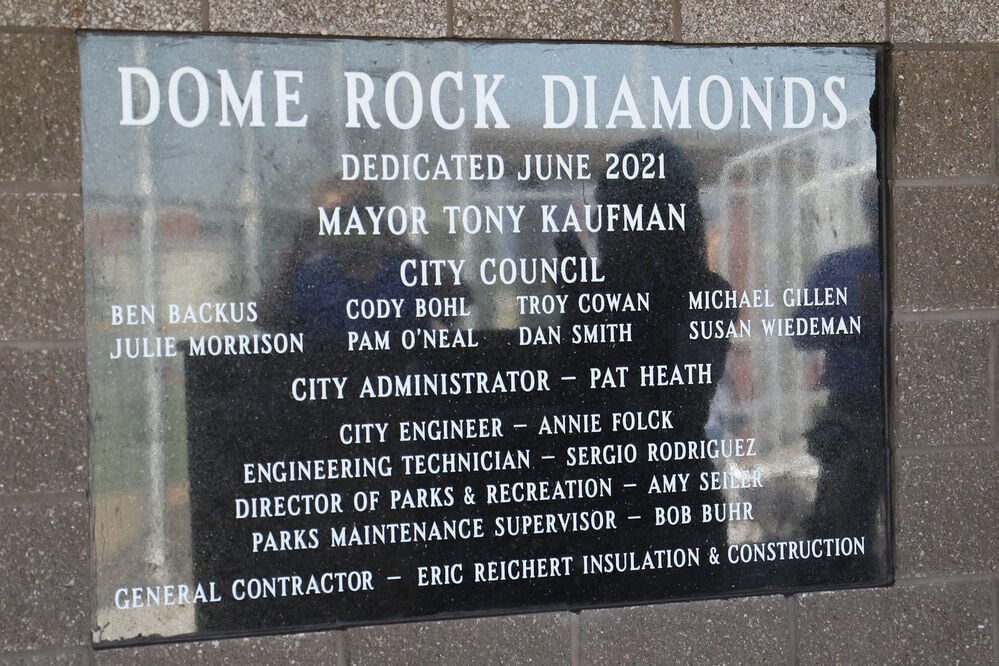 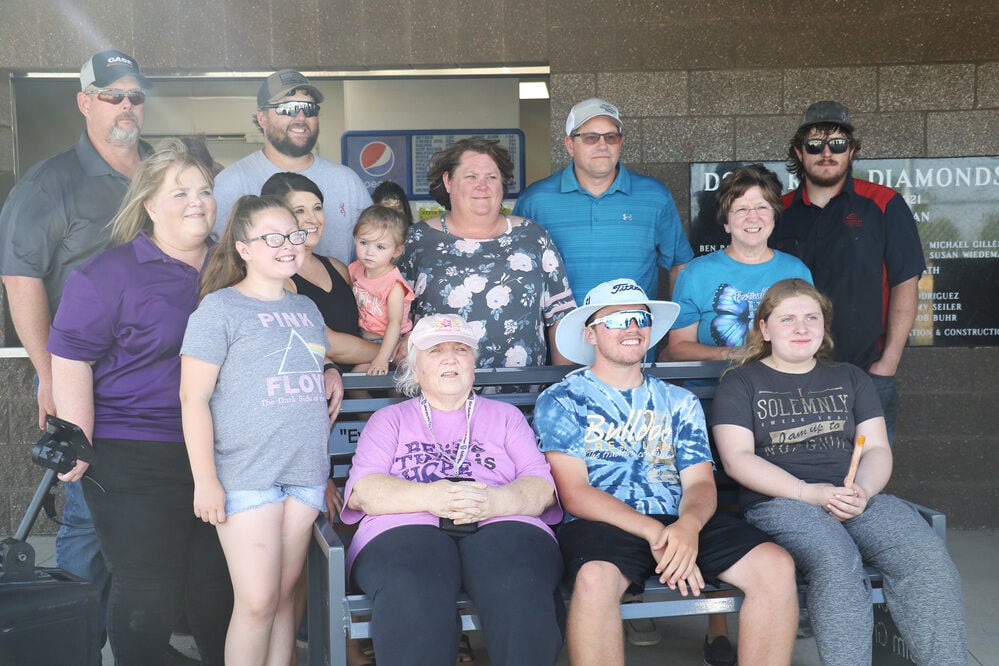 The Jim Greene family poses with the bench they donated in his memory to the Dome Rock Diamonds. The bench will sit under a tree at one of the baseball fields. 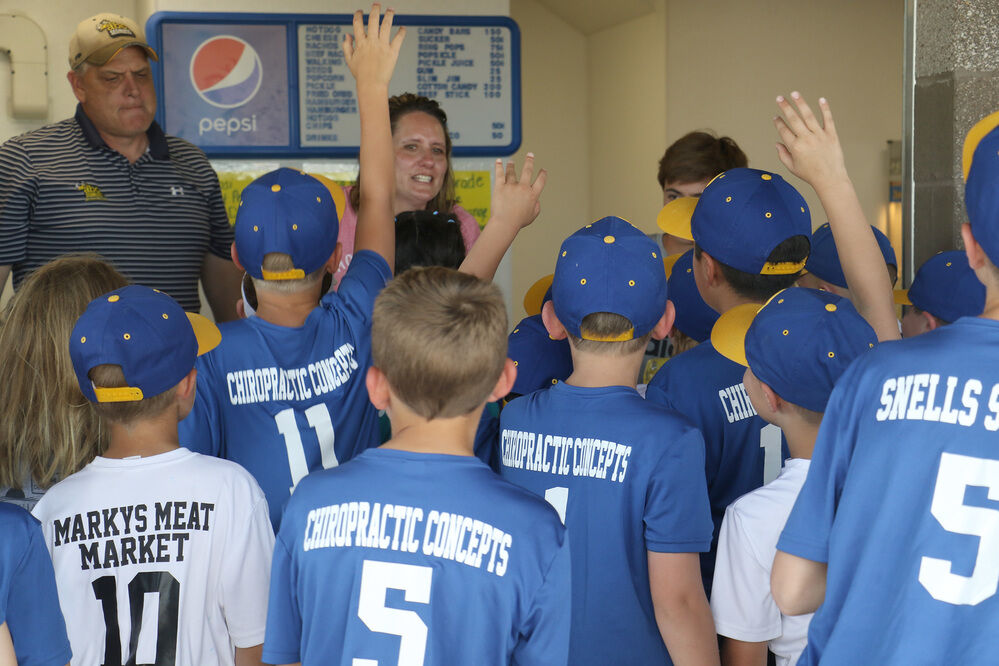 Gering Baseball players lined up outside the concession stands for free popsicles after the dedication ceremony before their games that night.

A crowd of about 50 people, including a couple youth baseball teams, a handful of Gering City Council members and even Congressman Adrian Smith, gathered at the central area of the new Dome Rock Diamonds baseball-softball complex for its dedication Wednesday.

Amy Seiler, Gering’s director of parks, recreation and leisure services, led the ceremony, recognizing all the people who made the $3 million project possible.

Mayor Tony Kaufman spoke of his pride in Gering at the fields’ dedication, speaking to the community’s commitment to youth sports, tourism and the city’s overall vision for growth.

”Projects like this don’t just happen,” he said. “This particular one has years of hard work and dedication and vision to bring more resources and bring more facilities to our community to hopefully grow a huge sports program and reinvest in our community and provide economic opportunities for our community and our neighboring communities as we go forward.”

Tourism director Karla Niedan-Streeks also spoke at the ceremony to acknowledge just how much the new complex will do for tourism in both Gering and Scottsbluff.

“Just a few short days after those last lines were painted on the fields out here, we hosted our first major tournament,” she said. “We brought 28 teams from multiple states into our community; over 475 players came to this facility to play ball. And those people obviously stayed in our hotels, and they ate in our restaurants, and they shopped downtown, and they visited our attractions in between games, which was great economic impact for our community.”

Then, after a short speech from Gering Girls Softball Association president David Kiraly thanking everyone for helping them to grow the baseball and softball programs in Gering, Seiler went through all the individuals who helped make the Dome Rock Diamonds possible, personally thanking each one of them for their contributions to the project.

Right before the unveiling of the dedication plaque, Seiler acknowledged one more person who played a large role in Gering baseball: Jim Greene. Greene, who died last year, was committed to the ballgame across the state of Nebraska for his entire adult life, Seiler said, reading from a note from his family. He was the Babe Ruth Nebraska State Baseball commissioner and the Nebraska Cal Ripken State Baseball commissioner for over 40 years. He brought seven regional tournaments to the Scottsbluff/Gering area and coached many teams to state, regional and even World Series tournaments. His dream to his dying day was to host a Babe Ruth League’s Cal Ripken Division World Series in the area.

“‘Dad’s dream is now ours,’” Seiler read the words of Greene’s daughter Jana Mount. “‘And with this new facility, we’re one step closer to making that dream a reality.’”

Greene’s family donated a memorial bench that will sit at one of the four fields at Dome Rock Diamonds. On it reads the words, “Every kid should have the opportunity to play baseball,” something Greene always said and worked toward his entire adult life.

“I think this is a perfect closing for us,” Seiler said after telling Greene’s story. “I think that we are continuing his vision. Because of this park, every kid is going to have the opportunity to play baseball or softball, create incredible memories and create great work ethic, and create great experiences that they will never forget the rest of their life.”

With that, officials unveiled a dedication plaque located on the southwest side of the concession stand, and the celebration concluded with players in attendance getting free ice pops before their night of ballgames.

Some of Gering's High Ability Learners participated in an all day STEM camp making edible food cars on Tuesday, June 8.

Life at the zoo

There’s always work to do at Riverside Discover Center whether it’s training animals or feeding and caring for them. The Courier’s Andrew Smit…

Legacy of the Plains shares more detailed information about who lived in the Gentry house.

A group of area parents have come together with a goal to establish and build a 14-apartment residential community for semi-independent adults with developmental disabilities in Gering.

With Theatre West taking back the stage this summer, it also means the Hebbert family is back in action.

GERING — The goal of Gering Swimming Pool staff is for all children to have the opportunity to learn to swim.

Mayor Tony Kaufman spoke on behalf of the City of Gering and its council members at the dedication ceremony. He thanked everyone's hard work on the years-long project.

The Jim Greene family poses with the bench they donated in his memory to the Dome Rock Diamonds. The bench will sit under a tree at one of the baseball fields.

Gering Baseball players lined up outside the concession stands for free popsicles after the dedication ceremony before their games that night.