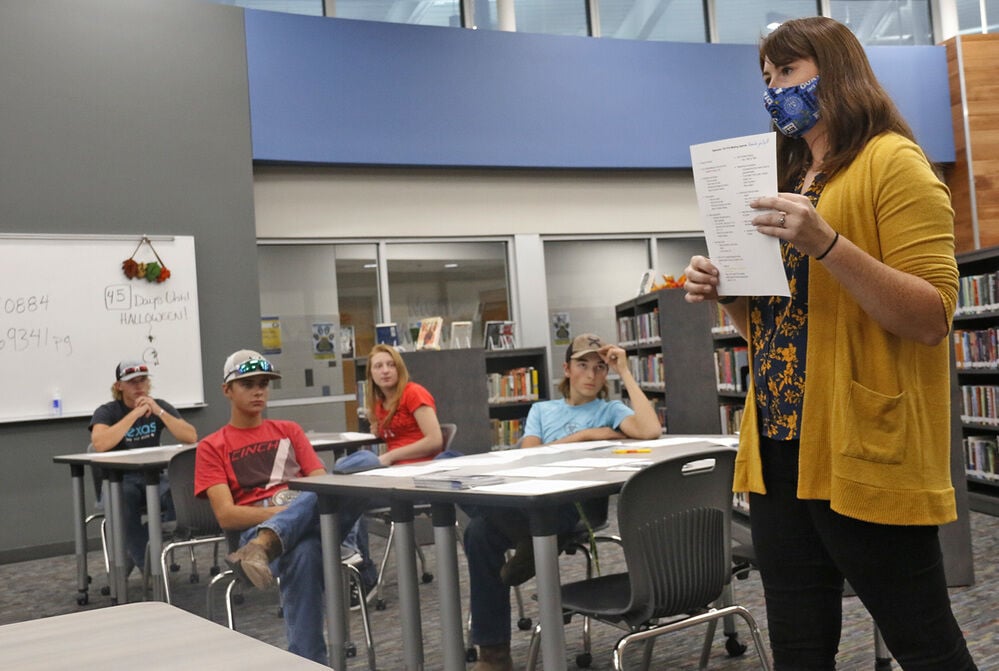 Ag teacher and FFA advisor Carrie Johns during a chapter meeting on Sept. 16, 2020. 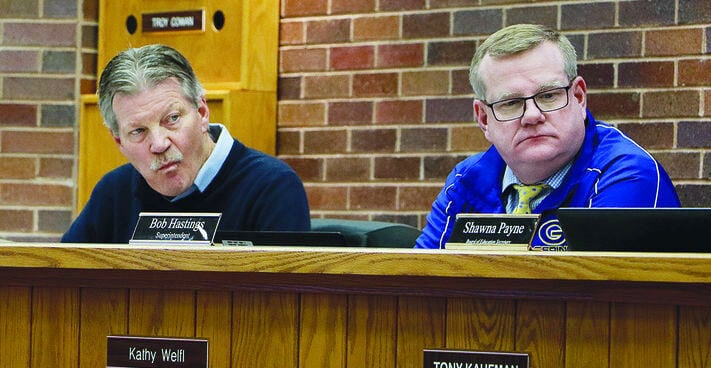 GPS Board President B.J. Peters (left) during the December 2019 board meeting. 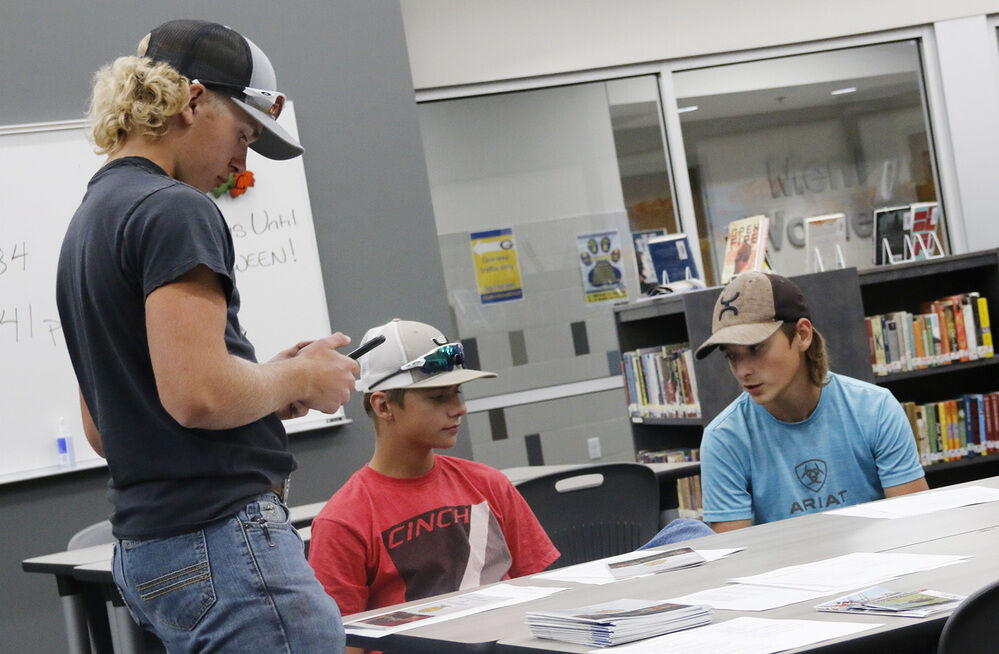 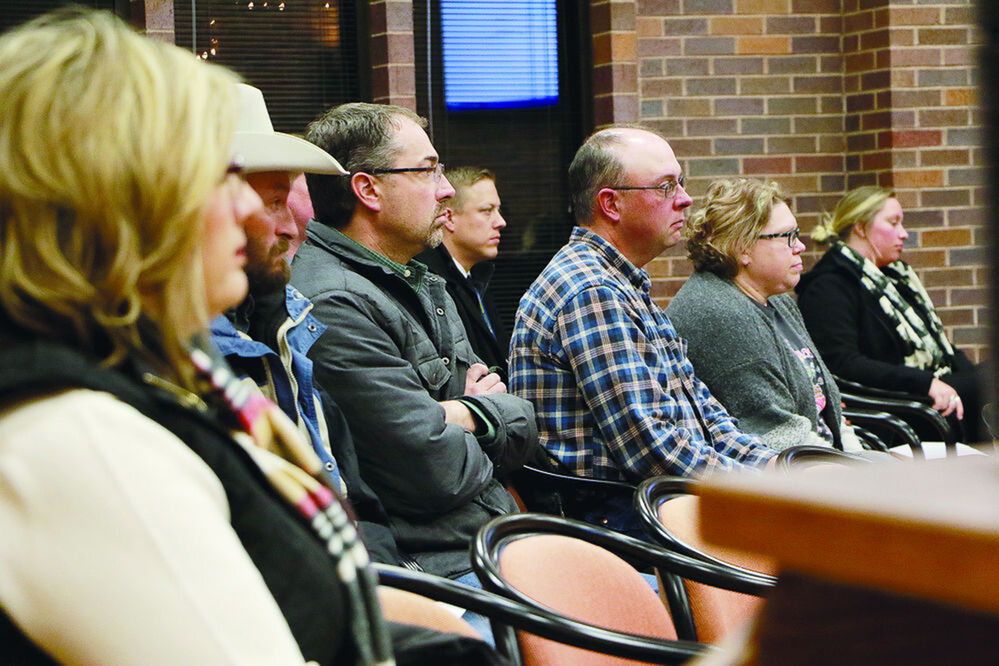 Parents gathered in the Gering City Administration Board room for the December 2019 meeting.

When Chance Rahmig was younger, his father told him stories about the sea of blue felt jackets in Indiana. Now, the Gering High School Junior might have the chance to tell stories of his own.

Rahmig is one of a dozen students participating in Gering High School’s new FFA club, accompanied by an agriculture program. GHS FFA is six weeks into its existence and — so far — is maintaining strong numbers.

“I’ve been around ag all my life,” Rahmig said. “In the classroom, you get to break it down and see all those larger units.”

On Thursday, Sept. 17, 11 students met in the high school’s media center to talk about officer applications, determine fundraising dates and brainstorm community service ideas. It was, in many ways, a mundane club meeting on the surface. But it was only possible after dozens of parents flooded a public school board meeting, years of reconstruction and the passage of a $24 million bond.

While agriculture is a major employer as well as a cultural staple of western Nebraska, FFA has been absent from the area’s second-largest high school for nearly two decades. The seed of Gering’s FFA were planted in a December 2019 Gering Public Schools board meeting after dozens of parents clustered into the Gering City Administration Board Room. They wanted to talk about farms.

“As a school board member, it does make you nervous when you walk in and see 40 or 50 people sitting there waiting,” Gering Public Schools Board President B.J. Peters told the Star-Herald. “It was for a good reason — it was because they cared about our kids.”

Peters said an ag program had been on the district’s radar for a while. However, the district struggled in the past to get a program going. Things like class schedules and building availability hindered any progress, according to Peters. Throughout that time, Peters speculated GPS might have lost students to other districts because they didn’t have an Ag program.

“We really didn’t have the facility to do some of those programs,” Peters said.

There was also a resource problem. During that December meeting, Peters told parents that an Ag program might take away money from GHS’s woods program — where students learn to construct a house — and its auto program.

“I told the parents ‘I’m not going to sacrifice two successful programs for a new one. We need to figure out a way they can exist together,’” Peters said. “You don’t want to spread yourself so thin that you end up not making any of them as strong as they should be.”

That all changed with an election in 2017.

That November, voters approved a $24 million bond to renovate the high school. The facelift extended the available space in Gering High School, allowing the district to house the freshmen class in its high school building. Peters said the high school’s move to a career-pathway program also played a significant role.

“There is a huge need for some education beyond high school and we need to plant that seed while (students) are in high school,” Peters said. “The ag program certainly fits that piece.”

Between the building renovations, the bond approval and parent pressure, Peters said all the right pieces for an ag program fell into place.

“It was the perfect storm, everything kind pf came together at the right time,” Peters said.

But you can’t teach an Ag program without an ag teacher. That’s where Carrie Johns comes in.

Johns took the job in March just as COVID-19 forced schools to end in-person instruction. She’s an FFA alumna herself and taught a similar program in Broken Bow before coming to Gering.

“(FFA) offered me a foot in the door to agriculture and all the opportunities to network and learn more about agriculture,” she told the Star-Herald in March.

Johns’ move to Gering’s ag program wasn’t a sure thing. In March, Johns told the Star-Herald that she thought hard about the position. She wasn’t sure she wanted to leave her job at the Johns began working at the Panhandle Extension Center.

“I really thought about it,” she said in March. “The position I’m in right now has offered me a lot of opportunities. I started to apply as I thought about it but didn’t finish the application process until three weeks later. I really wanted to make sure that’s what I wanted to do.”

She did complete the application eventually and got an interview for the position. While Johns was diligent about considering Gering, Gering seemed set on hiring Johns. They offered her the job the day after her interview, according to Johns.

She began planning for the ag program once hired and filing paperwork for the FFA program. She said that COVID-19 slowed, but didn’t prevent chartering the club.

“Now, we’re trying to get (students) to figure out what they want and how they want to set there chapter up,” Johns said.

The FFA club was helped along by two grants, totaling $3,300 Johns said. The club plans to use the money for start-up materials like jackets.

At a recent media gathering at Gering Public Schools Central Offices, Johns said she had 64 students enrolled in her ag classes and 16 interested in the FFA program. Right now, she’s teaching intro to agriculture, a year-long course, and a semester-long animal science class that graduates into large animal management next semester.

“Eventually, we’re gonna dissect some fetal pigs if we can get them ordered in time,” Johns said.

Despite the program’s apparent success, lurking in the background is COVID-19.

So far, Gering High School has mostly been spared any outbreak of coronavirus cases. As of Sept. 21, the district has reported five cases, four of which are active, and all are among high school staff or students.

The hands-on nature of the ag program makes it especially difficult to teach if schools were to close again. Until then, the program and the club continue.

October is a busy month for the FFA club.

Officer applications are due on Oct. 2, so is a promotional article written by students for an agriculture magazine. The club meets again Oct 15 and plans to sell concessions at an Oct 22 Volleyball game.

Three incumbent school board candidates will coast back into their seats for another four years, after no challengers sought to usurp their po…

Ag teacher and FFA advisor Carrie Johns during a chapter meeting on Sept. 16, 2020.

GPS Board President B.J. Peters (left) during the December 2019 board meeting.

Parents gathered in the Gering City Administration Board room for the December 2019 meeting.