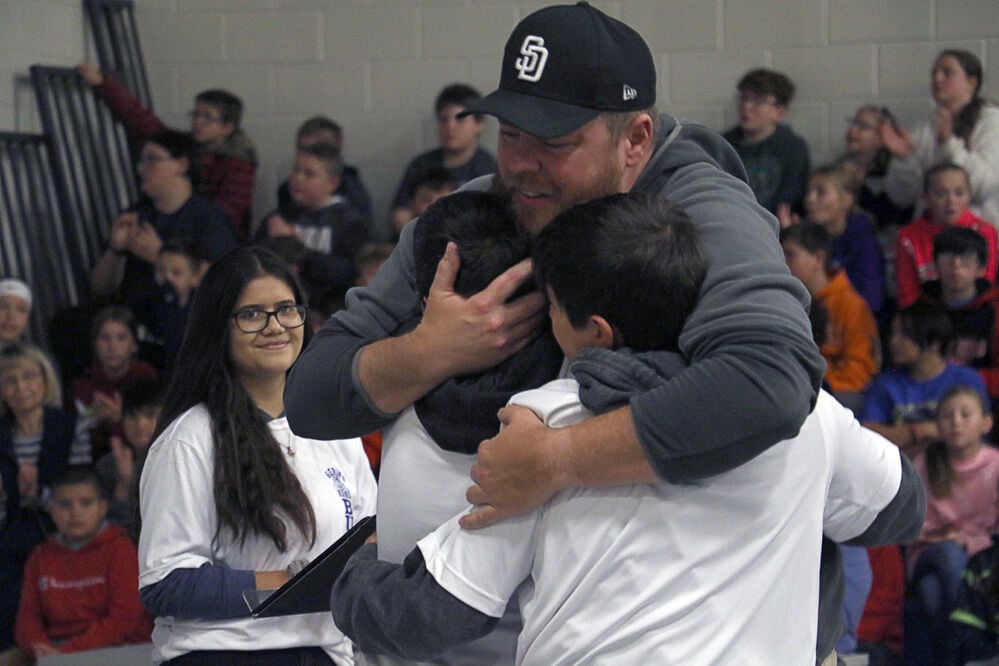 Jeff Macy hugs his sons Jack and Maddox at the Gering Junior High Veterans Day program. Macy served in the Navy for 13 years. 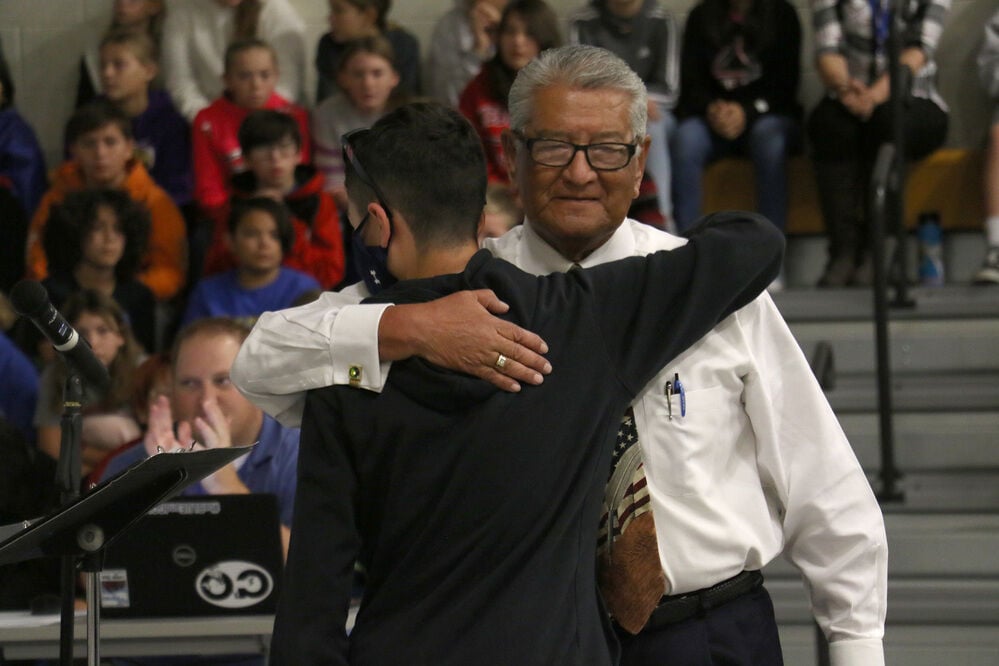 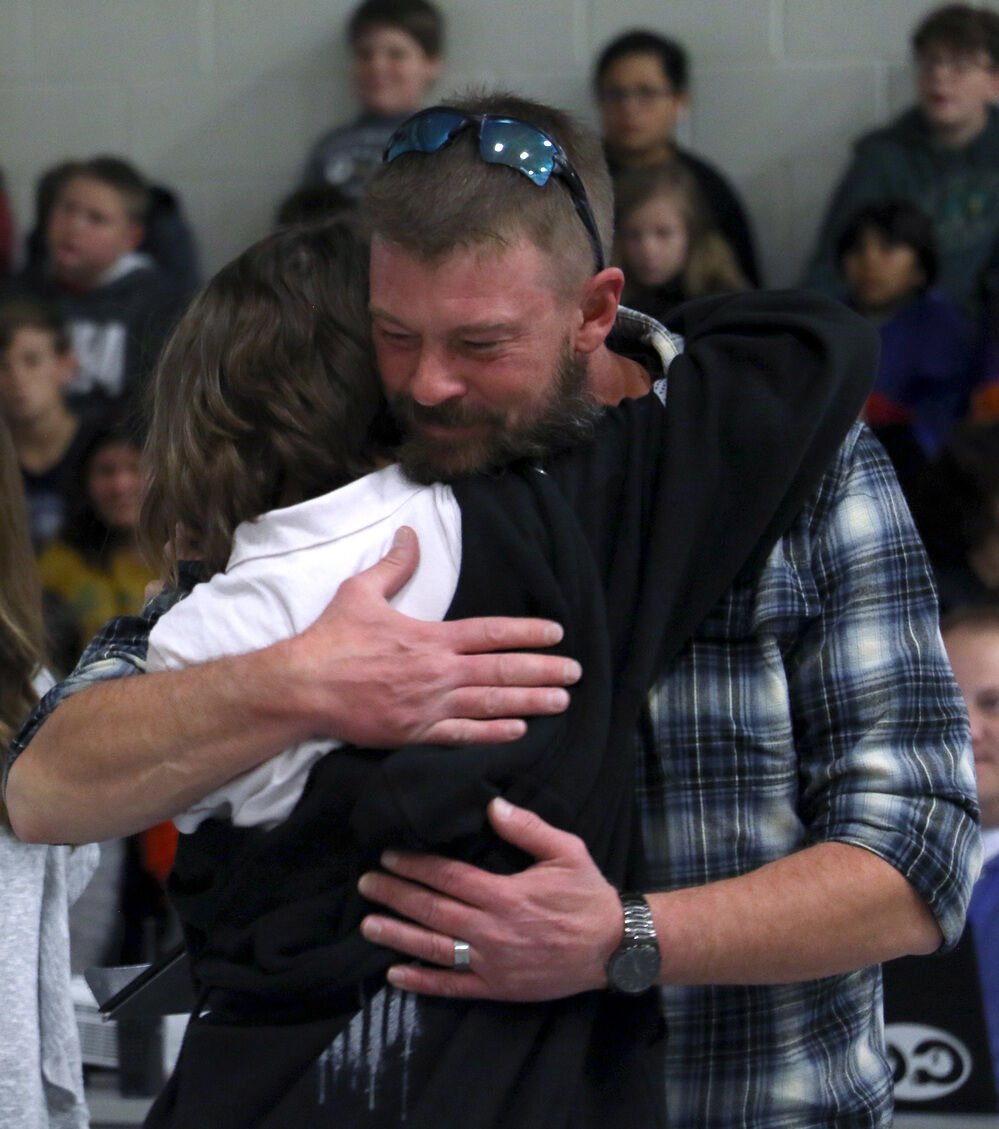 Lydia Williams hugs her father Steve Williams, a veteran of the U.S. Army, during the veterans day program on Thursday. 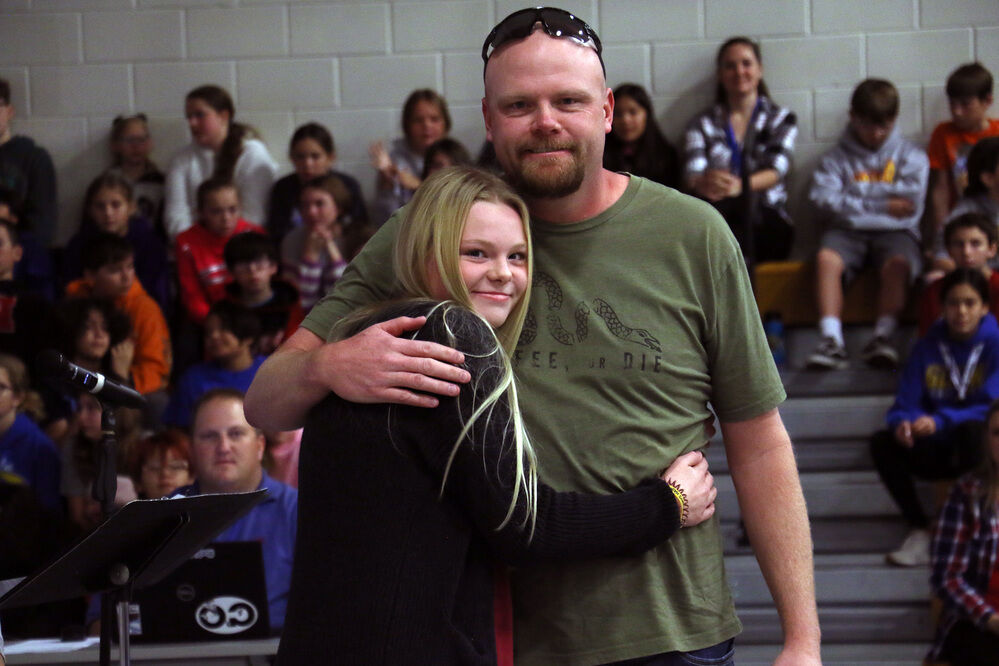 Ivy Bruckner shares a hug with her dad Dustin, who served in the army for 12 years. 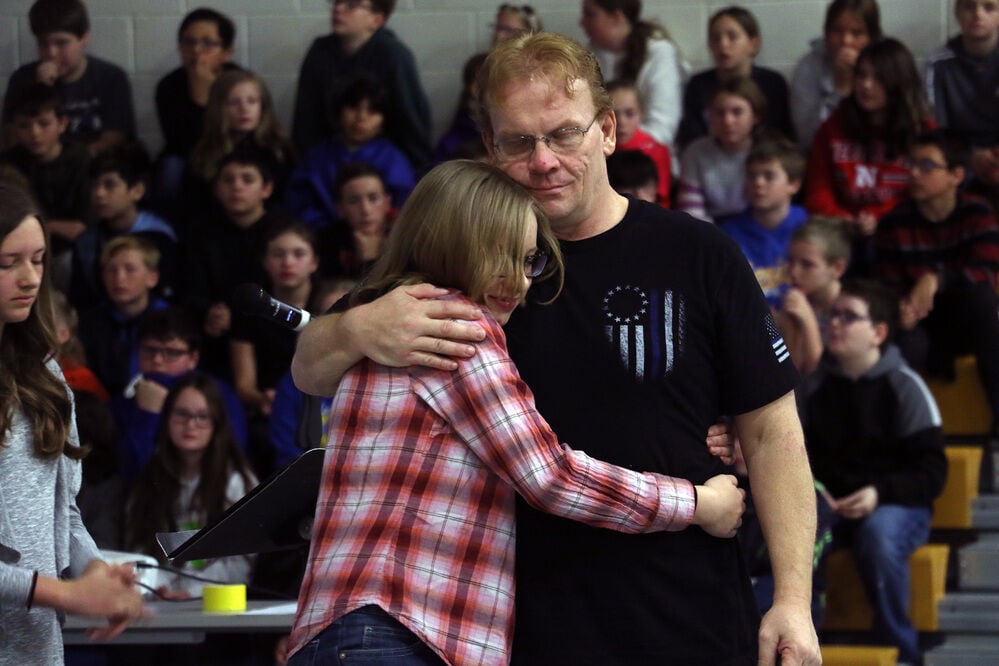 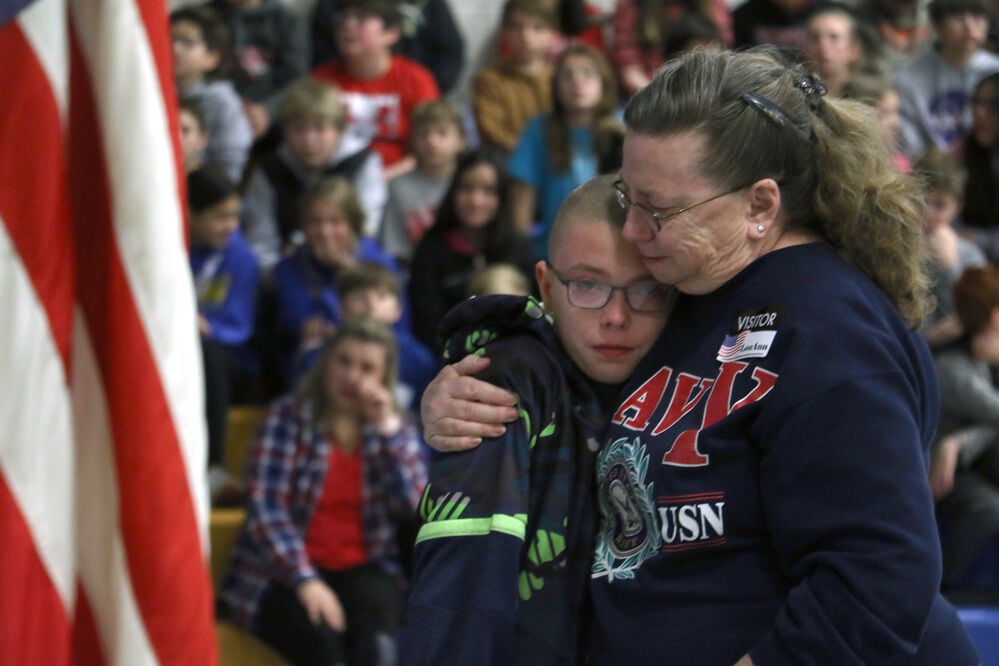 Emotions were running high at Gering Junior High School Thursday, Nov. 11, during the annual Veterans Day program. Students with relatives who’ve served in the military got up in front of their peers to honor their fathers, mothers, aunts, uncles and grandparents with emotional hugs and expressions of gratitude for their service to the country.

Prior to the familial honors, the program opened with "The Star-Spangled Banner," the national anthem, sung by the eighth grade choir. Then Principal Shawn Seiler welcomed veteran Philip Eckerberg, a sergeant with the Scottsbluff Police Department, to the podium to share some of his experiences in the service.

However, Eckerberg was going to do something slightly different than, perhaps, what many veterans usually do when they speak at programs such as these.

“I’m not going to tell war stories today. Instead, I’m going to tell you about being a veteran,” he said. “…Several years after I was discharged, my father bought me this hat — it has a symbol of the 25th Infantry Division on it. First time I wore this hat out, something happened to me. A stranger walked up to me on the street and said, ‘Thank you for your service.’ I did not know how to respond to that or what to say back to him.”

Eckerberg said that feeling of not knowing what to say stuck with him for a while, and it actually isn’t that uncommon. Still, he encouraged civilians, including young people like the junior high students in the audience, to say thank you to veterans anyway.

“It took a while for me to decide how to respond to people that thanked me for my service. I finally came up with what I feel is a polite and appropriate response. I tell them, ‘You’re welcome. It was my pleasure to serve,’” he said. “…When you see someone wearing a hat like this, feel free to thank them for their service. And, don’t be offended if they’re unsure what to say back. Just know that they did their duty to their country, and they appreciate the gratitude you show them.”

Following Eckerberg’s speech, a video played of one junior high student, Camille Shimic, interviewing her grandfather, who enlisted in the U.S. Navy right out of high school in 1960.

From there, the veteran relatives in attendance were given gift cards as a small thank you from the junior high student council. Each veteran was called up, and their junior high sons, daughters and grandchildren came up to present them the gift cards.

Families gave each other big squeezes, and a few tears were shed.

The program ended with the playing of "Taps" by a junior high student, a patriotic video honoring all veterans and then the special “Bulldog clap” led by Seiler to clap the veterans out of the gym and into the cafeteria for a small reception.

Seiler, who partnered with Brenda Pszanka in putting together the program, said it’s important to celebrate Veterans Day not only to honor the veterans, but to teach the students the importance of their sacrifices.

“I think it’s just important for our kids to never forget our freedom, and so I think seeing the sacrifice and the people that served, I think that’s important,” he said. “…We want to make sure kids understand there’s great freedom out there, but it takes — there’s a big responsibility to have freedom. It takes service. So that’s the big message.”

Jeff Macy hugs his sons Jack and Maddox at the Gering Junior High Veterans Day program. Macy served in the Navy for 13 years.

Lydia Williams hugs her father Steve Williams, a veteran of the U.S. Army, during the veterans day program on Thursday.

Ivy Bruckner shares a hug with her dad Dustin, who served in the army for 12 years.