4-H’ers polished up their horses and tack to compete for top honors at the Scotts Bluff County horse show on Saturday, July 30.

Twenty-one 4-H youth with gleaming horses in tow showed-off equestrian skills at the Historic Saddle Club. The day began promptly with horses lining up in halter for showmanship followed by mare and gelding classes.

“When I heard ‘31’ announced, I was like, ‘What,’” Sterling said. “I was just so shocked. There was seniors and intermediates out there and the judge picked me.”

He led his seasoned horse, Hank, through the showmanship patterns with confidence after spending the past three days practicing for the class, smiling nearly the entire time. In addition to the pattern, judge Addysen Rosner asked the kids horse-related questions to further test their equine skills.

“I was the only junior to answer the judge’s question — It was ‘Where is Hank’s hock?’,” Sterling said.

Sterling said the favorite part of horse show day was, “probably when I get home and flop into bed because then it’s all done.”

Following the halter classes, a small group of kids dressed in English attire entered the arena. The class was split with 4-H’ers showing English for the first time alongside novices in all age divisions.

Riding English for the first time in a 4-H show, Weston Cannon, 12, was looking forward to the two classes – English Pleasure and Equitation.

“I like it the same as Western but it’s fun to learn it,” he said. “I’ve always wanted to try it and we already had the saddle, so why not.”

After quickly saddling up his new horse, Davis, Weston began learning the equitation pattern given to all the 4-H’ers at sign-in time.

“I walk the pattern by myself, like if I was on an invisible horse,” he said. “I walk, jog and kind of do a gallop to help me remember it.”

After English ribbons and prizes were awarded, the main arena was worked to prepare for the second half of the day — the Western classes. The Saddle Club trail arena was open for anyone ready to ride the trail patterns for judge Georgie Younglove.

One of the first competitors to give the brightly decorated trail arena a go was Baliegh Lane, in the senior division.

“I like trail a lot, honestly,” she said. “I don’t necessarily have a favorite out of all the events but I’m probably looking forward to reining the most because that’s kind of what (my horse’s) specialty is.”

Lane had recently competed in the High School National Finals Rodeo before switching gears to prepare for fair week. She brought three horses to town, one for the experience and two for show.

“I used to rodeo on her and now she’s just strictly been converted into a show horse and then my other mare, I will run barrels and poles on her later in the afternoon,” Lane said.

Lyla Swenson said she was looking forward to the Western classes.

“Trail class went OK, but I completely forgot about the mailbox,” she said. “To be fair, I remembered it, but then I second guessed myself on the pattern.”

Swenson said she likes riding her horse and all the riding classes. If she had to pick a favorite, it would be reining.

Brecken Ricker, Swenson and a group of intermediate level riders discussed the Western patterns and lead changes before the classes began.

“I’m not worried about the lead changes,” Ricker said. “And this is Ray. I like riding all the classes and he’s the one I ride all the time mostly. I did scratch the trail class after last year when it had shaking the cans; I just didn’t want to do it this year.”

The horse show competitions came to a close with the speed events. Kids lined the arena rails to whoop and holler as their fellow competitors circled the barrels and poles.

For more information on 4-H horse events and a full list of results, contact the Scotts Bluff County Extension Office at 308-632-1480 or visit extension.unl.edu/statewide/Scottsbluff-morrill/scottsbluffcounty4h.

Nicole Heldt is a reporter with the Star-Herald, covering agriculture. She can be reached at 308-632-9044 or by email at nheldt@starherald.com.

The sun rose over the horizon as hot air balloon pilots and their crews worked to inflate the envelopes for the Balloon Fiesta in Albuquerque,…

A 42-year-old Gering man drowned Friday July 29 at Lake Minatare State Recreation Area near Minatare, according to information released by the Nebraska Game and Parks Commission.

One home, outbuildings destroyed in 170-acre blaze on West Overland

About 150 firefighters from several departments battled a large fire on West Overland the evening of Thursday, Aug. 4 and into Friday morning.

One ring at a time: Gering business makes medieval armor and more

One local business owner has taken his passion for crafting back in time. Randy Rice, co-owner of Hand Crafted in Gering, pieces together suit…

New teachers and new staff were welcomed to Gering Public Schools last week with an orientation and new staff training. However, efforts to gi…

Homemakers Club pulled off a successful open class showcase at the 2022 county fair. Best of Show honors were awarded to Nancy Butcher exhibit…

Court filings in the case against a Gering man accused of shooting his wife’s boyfriend reveal few details.

Gering couple, Matthew and Ashley De Los Santos, have started a new family business, one they’ve taken on the road. The couple have owned and … 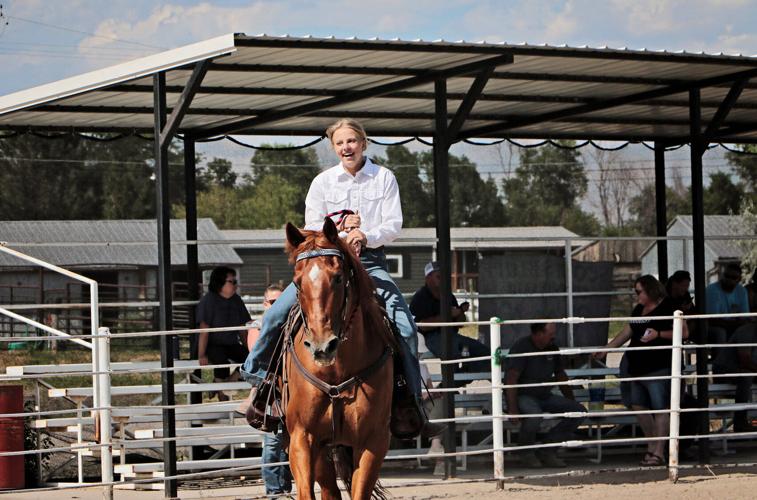 Natalie Zeiler is all smiles after her clean run of poles, the final class in the Scotts Bluff County 4-H horse at the Historic Saddle Club on July 30. 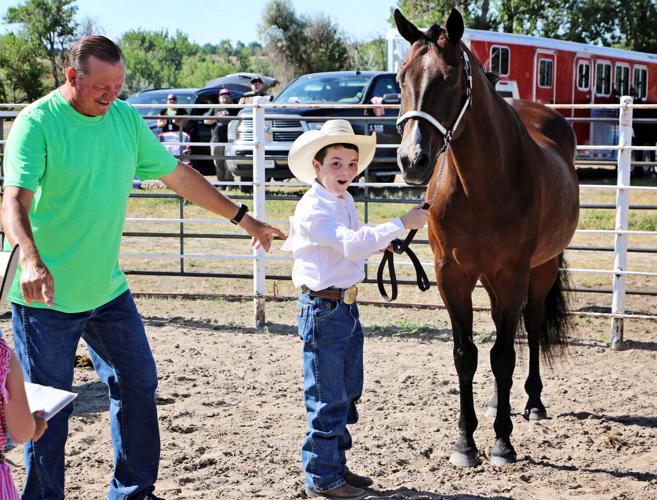 Craig Schadwinkel (left) begins to direct the awards for reserve champion overall showmanship towards Sterling Cannon (center) as he hears his number announced on the speaker at the Historic Saddle Club during the Scotts Bluff County 4-H horse show on July 30.