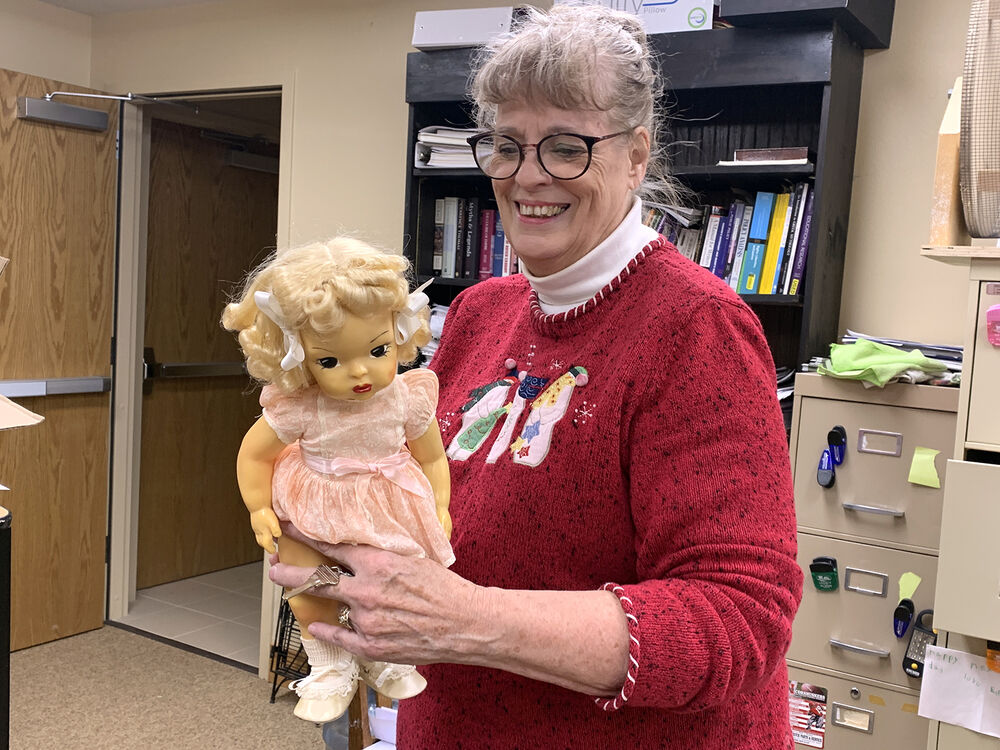 Sandy Strey shows off her Terri Lee doll she has had since she was a child on Wednesday, Dec. 22 at the Legacy of the Plains Museum. 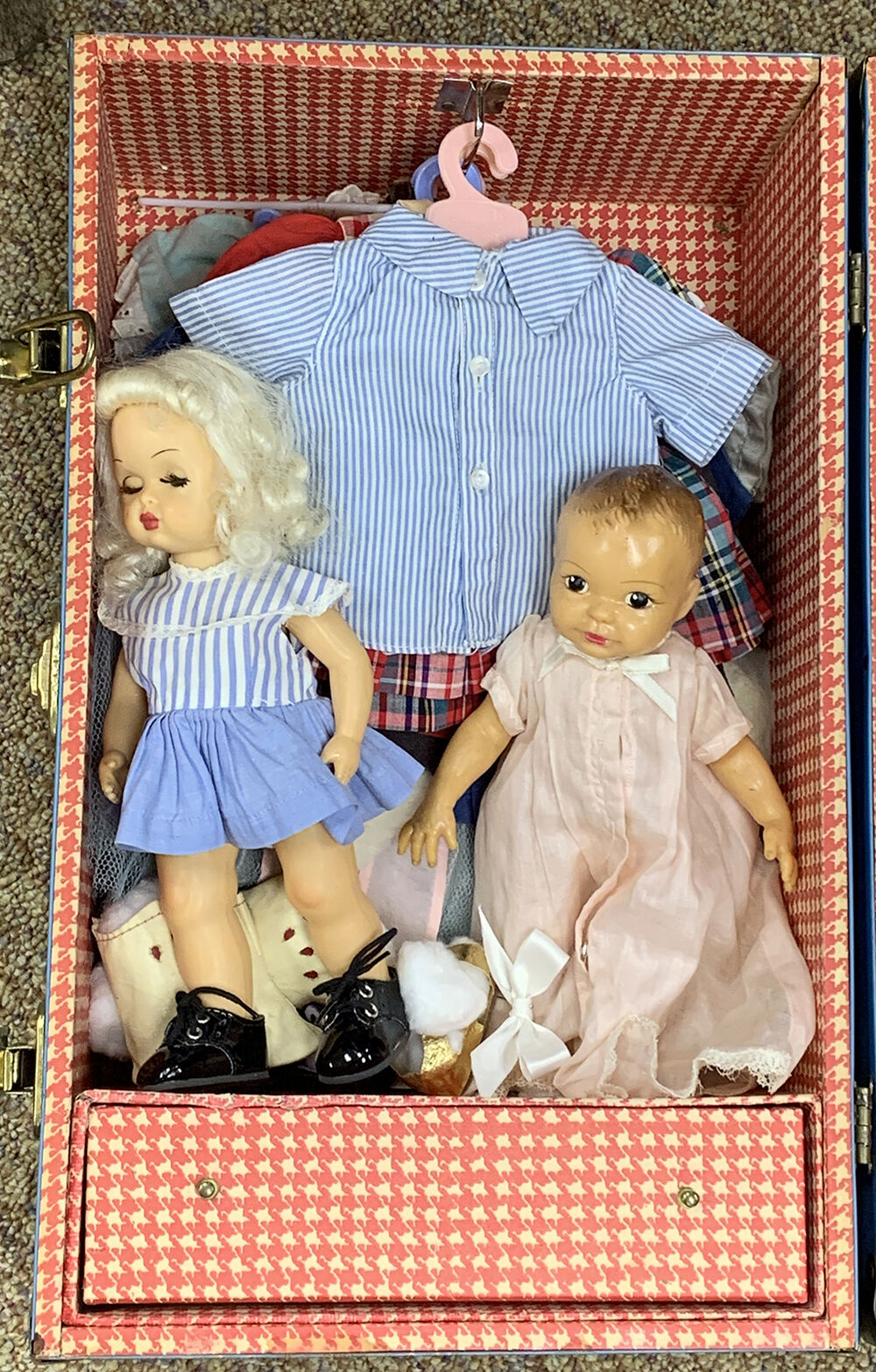 Pictured are two smaller dolls made by Terri Lee. They weren't as popular as the bigger models, Sandy Strey said. 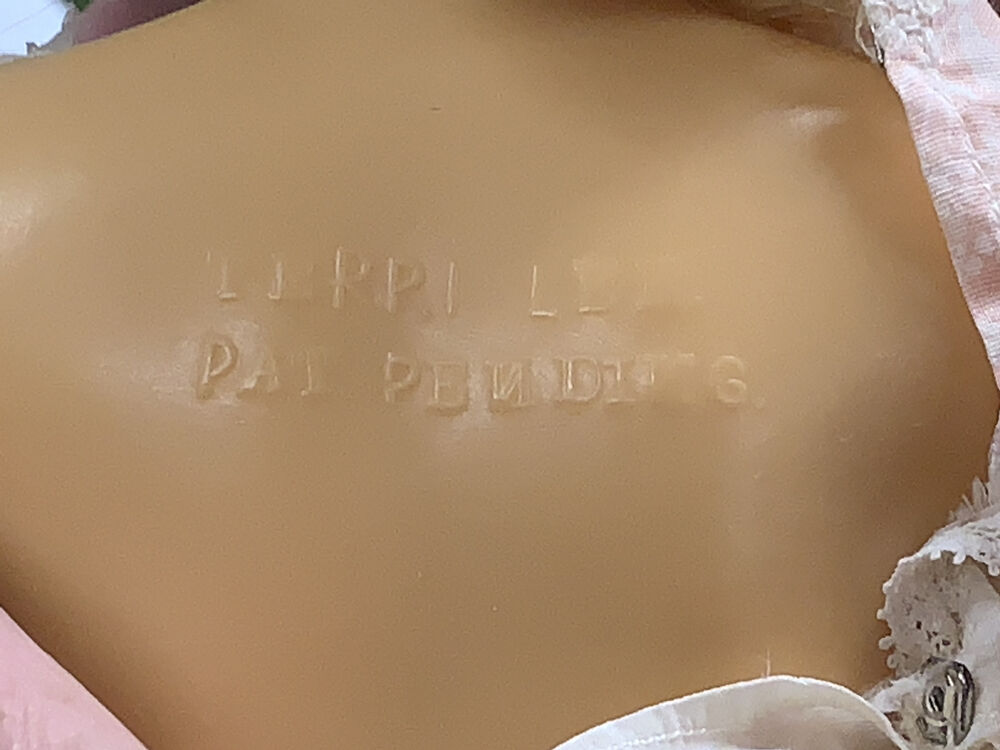 Terri Lee dolls made from 1946-1947 were Patent Pending and were stamped as such on their backs.

In the late 1940s, Sandy Strey, a volunteer at the Legacy of the Plains Museum, was among the girls nationwide who had the Nebraska-made Terri Lee doll on their Christmas wishlist.

Strey still has the one she got in 1946 or 1947 and likes to show off one of the dolls on display at Legacy of the Plains.

The dolls were already in high demand in the valley when Strey got her own.

“I wasn’t very old. A lot of girls here had them,” Strey said. “We bought them at the Mary Morrow Shop. (Morrow) is somebody who had all kinds of beautiful children’s clothes. She also had some dolls.”

Terri Lee dolls took the world by storm after debuting at the 1946 Toy Fair, according to an article by History Nebraska.

The Terri Lee doll was designed by Maxine Sunderman Runci, a former Omaha resident, and her aunt, Violet Lee Gradwhol.

According to the history of the doll, Runci was on her way from California to New York City to show off a doll she created to look like her own daughter. On the way, she stopped in Lincoln to visit family.

Runci showed the doll to Gradwhol, who repaired dolls for a Lincoln charity. Gradwohl accompanied her niece to the toy fair, but they were turned away. They convinced another doll manufacturer taking part in the fair to display their doll, which became a hit, according to the article.

The pair decided to make the dolls in a Lincoln factory. By the end of 1946, the factory had churned out more than 8,000 of the popular doll, according to the article.

Strey said the doll stood out because of its quality compared to other dolls of the time.

Originally, the dolls were made from a composition of sawdust and glue, she said.

“They changed them from that composition to make them into something more (flexible),” she said.

“She had thousands of clothes, that’s why everybody collects it,” she said. “The trick was you got a doll and you liked (the dress she was wearing). You had two dresses if you were lucky and your mom was a good stitcher.”

Strey said she and her friends would often compare the clothes that their dolls were wearing.

“Girls would sit on the floor and then put all of the dresses on. You had to watch to make sure you got yours back,” she said, jokingly.

Strey said the dolls were also popular because they could be played with.

“When I was growing up, you didn’t play with porcelain dolls. This style you can play with. The older (porcelain dolls) that you see here (at Legacy of the Plains), a lot of times are wearing their original clothes because you weren’t allowed to play with them. These you could play with, not that it was easy. Part of the problem was trying get their clothes on, but it was a lot of fun,” she said.

She said she was fortunate to have a father who was skilled at building because he made a lot of accessories for her Terri Lee doll.

“When I got my doll, my dad made a wardrobe for her. She had a little wardrobe to put her clothes in,” Strey said.

Strey belongs to a doll club that has good streamstresses who still make clothes for the doll because of the cost of the originals, she said.

After volunteering at the museum, Strey learned so much about the doll that has become somewhat of an expert on them. She has given presentations on them around the state.

Strey said the factory burned down in 1947 and relocated to California. Growing up, though, she didn’t know or probably care where the doll was made.

“(Now), the ones from here, to me, are more valuable because of them being from Nebraska,” she said.

Strey also has two smaller Terri Lee dolls in her collection, but she said those weren’t popular.

Gretchen Deter from the North Platte Valley Museum wrote an interesting paper located in our archives about this site. She described the treme…

Gering councilman Ben Backus announced that he is running for the Gering mayor seat.

The other day in the library I heard a mother tell her child, “Honey, we have that book at home, let’s get something different.”

In late 1827 upon his company’s arrival back to St. Louis, Missouri, General William Ashley decided to send a group of men back out west to ge…

SENIOR SPOTLIGHT: Olivia Leypoldt readies for the next chapter

Sandy Strey shows off her Terri Lee doll she has had since she was a child on Wednesday, Dec. 22 at the Legacy of the Plains Museum.

Pictured are two smaller dolls made by Terri Lee. They weren't as popular as the bigger models, Sandy Strey said.

Terri Lee dolls made from 1946-1947 were Patent Pending and were stamped as such on their backs.