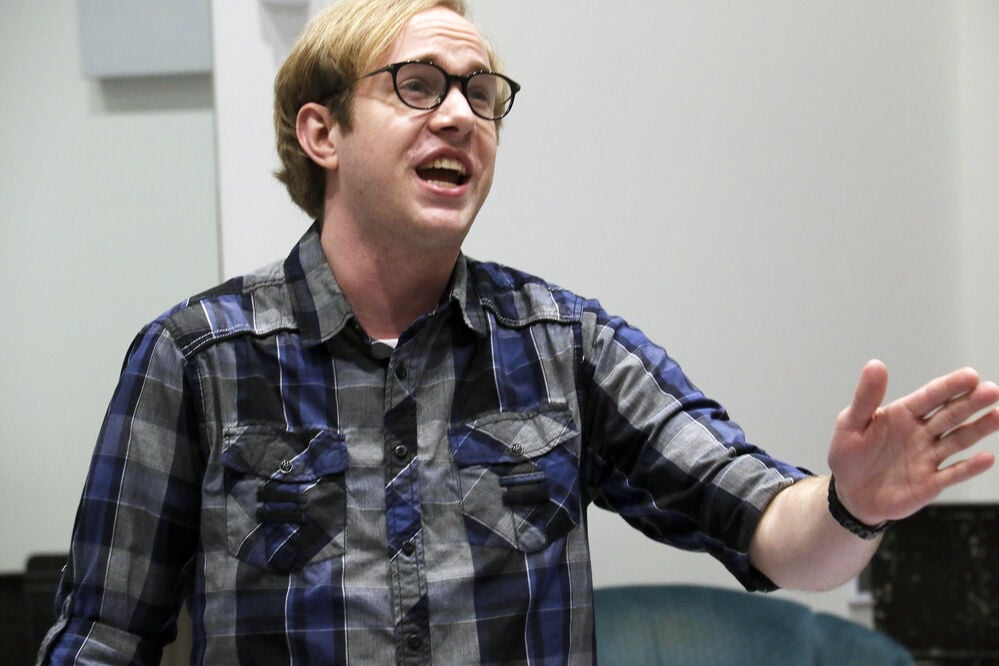 Ben Hill auditions in front of Patrick and Lauren Newell in the choir room at WNCC on Sunday, April 11, for a spot in one of Theatre West's summer productions. Locals had the opportunity to audition for "Almost Maine," "Grease!" and "You're Awesome, Possum." 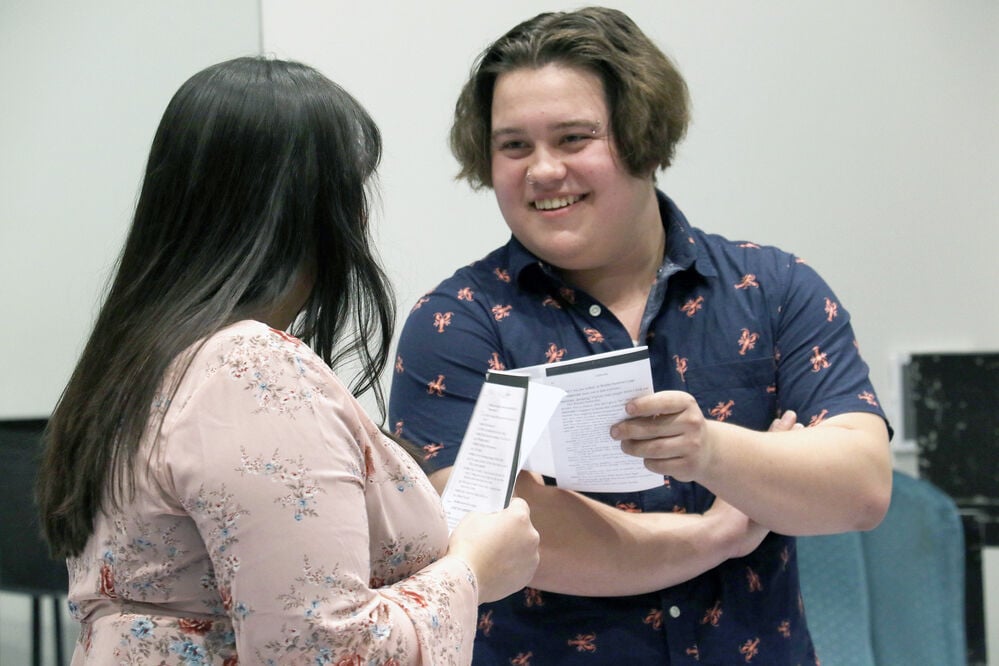 Billy Mosher (right) reads through a brief scene from "Grease!" with Mildred "Milly" Avitia during auditions at WNCC. Mosher said he was glad to have the opportunity to do live performances this summer. 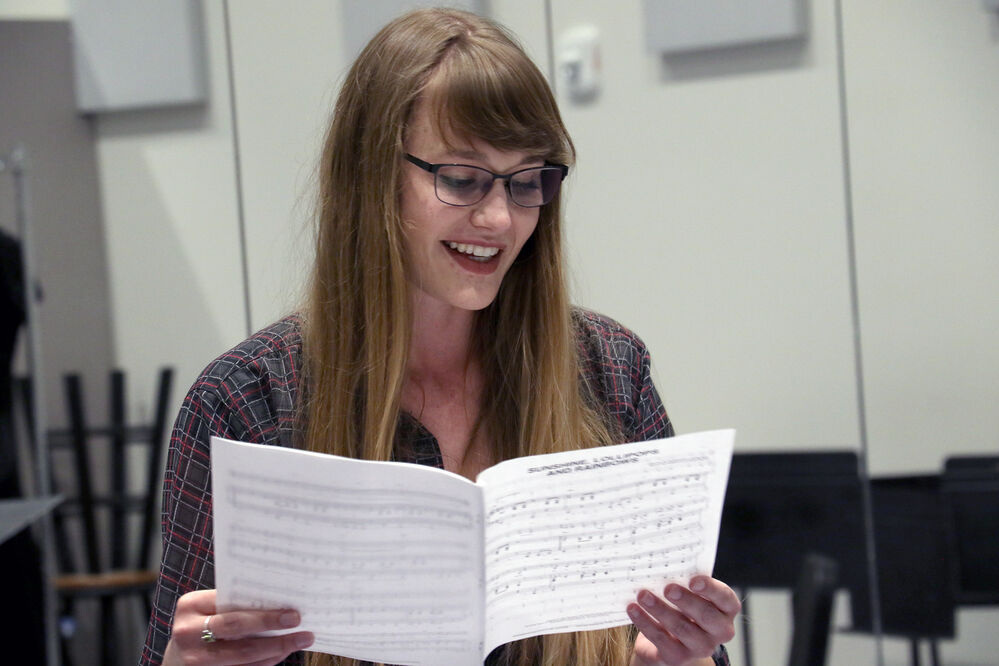 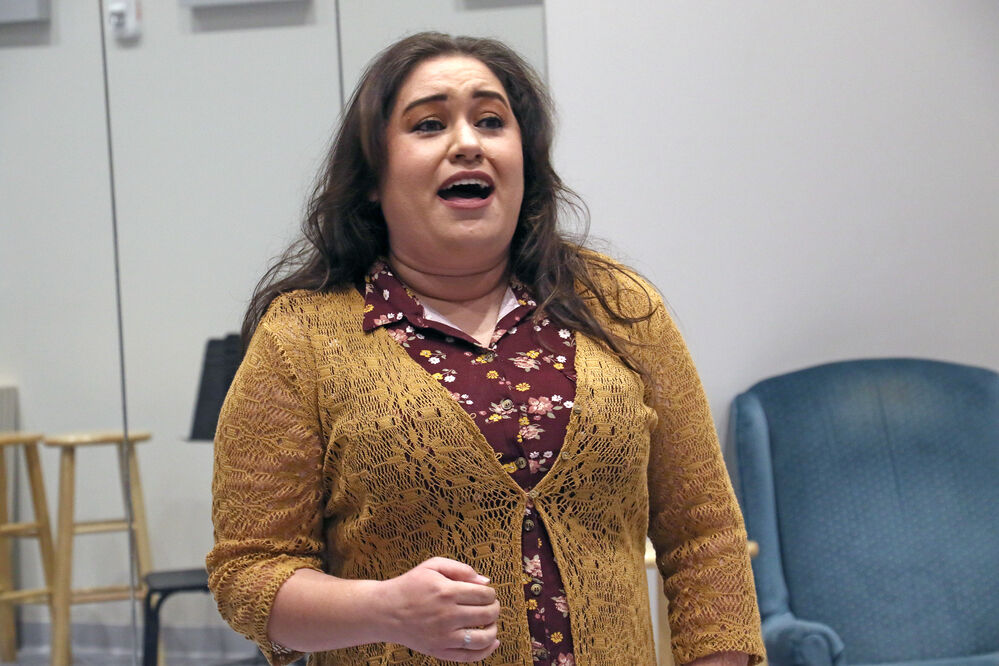 Sam Amaya belts out a showtune for her audition for one of Theatre West's productions.

Community hopefuls lingered in Platte Valley Companies Performing Arts Center lobby on the WNCC campus on Sunday, April 11, as they waited their turn to audition for a role in one of the Theatre West summer productions for its 31st season.

WNCC student Billy Mosher said he’d done this seven times, but still gets a little nervous walking up to the audition room. Despite the nerves, he’s glad live performance is back in town after last year’s hiatus.

“I’m glad to just have the opportunity this year,” he said.

He’s not the only one. Theatre West artistic director Patrick Newell and managing director Tami Lippstreu both said they are excited for this summer’s season.

“Coming off COVID going into this new year, it’s time for us to be in live performance,” Lippstreu said. “We will do what is safe for the community, but things are looking good. It’s time to get back together.”

Along with its mainstage shows, the company will also put on a 10-minute touring library musical called “You’re Awesome, Possum” which was written by Lippstreu and Lauren Newell, Patrick’s wife throughout the summer and a two-week youth camp in which local children will prepare “Frozen Jr.”

“It’s a day camp that goes from 9 a.m. to 2 p.m. They bring their sack lunches, and they’re supervised by the actors of the company, other volunteers in the community, locals,” Lippstreu said. “And they learn all the elements of musical theater.”

Theatre West will wrap up each month of its mainstage shows with its After Party Cabaret at 16th Empire.

Newell and Lippstreu said that the company will be taking the necessary COVID precautions throughout the summer. As of right now, Theatre West does not have a plan set in stone yet for the audiences of each show. They said they will be making those decisions as the performance dates get closer.

“Depending upon what happens with vaccinations … we are probably still at 50% capacity in the theater, still social distancing and still masked,” Newell said. “That’s our safest and most ideal way to go. I don’t see the actors being masked, but the audience for sure.”

Actors for the shows will include both locals and hired actors from all over the country, Newell said. He’s already hired actors from Illinois, Missouri, New York, Florida, North Carolina and Georgia, and one of the directors is from California.

Newell said that he’s not only looking forward to sharing live performance with the community again, but to also get these actors back on the stage.

“What I’m looking forward to is getting all of these actors and technicians back into the theater back doing what they love so much and they miss so much,” he said. “We’re in the process of hiring our technicians and our company actors — a lot of these people have been earning their living, acting full-time, and they haven’t been able to do that for over a year. And they are so excited to come back to get on the stage again.”

Amy Plummer returns to GPS after nearly 20 years away

GJHS takes STEM to the next level

With the year coming to an end, seventh grade students have been spending their exploration class time on the upper deck of the gym battling robots.

If you walk into the industrial arts and metal-working building at Gering High School and hear the sound of popcorn, you can know the students…

Gering seniors left the classroom and flooded the community on Wednesday, April 28, to help out with various service projects from highway cle…

Prom: A night of glowing colors

Gering High School hosted their prom at the Weborg 21 Centre in coordination with the WyoBraska Gives Laser Light Show on Saturday, May 1. Stu…

Students take to the stage, some for the first time in a year, in District Music Contest

With ties decorating their necks and rubber gloves covering their hands, around 10 to 15 Northfield Elementary boys in grades kindergarten thr…

Work continues inside a small, white building to preserve the stories of local Japanese-Americans who settled in the community. The Japanese H…

Senior Aspyn Johnson considered pursuing a career in hairstyling after high school. After her first semester internship with one, she realized…

Ben Hill auditions in front of Patrick and Lauren Newell in the choir room at WNCC on Sunday, April 11, for a spot in one of Theatre West's summer productions. Locals had the opportunity to audition for "Almost Maine," "Grease!" and "You're Awesome, Possum."

Billy Mosher (right) reads through a brief scene from "Grease!" with Mildred "Milly" Avitia during auditions at WNCC. Mosher said he was glad to have the opportunity to do live performances this summer.

Sam Amaya belts out a showtune for her audition for one of Theatre West's productions.