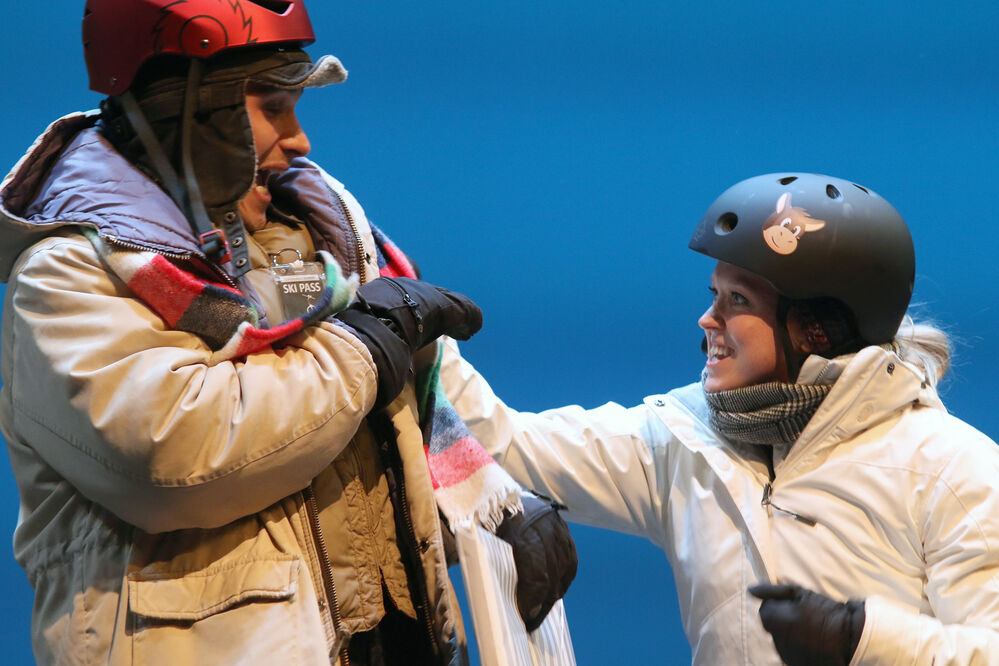 Best friends Dave (Dustin Petrillo) and Rhonda (Avery Lux) have trouble figuring out how to express their love for each other when they don't recognize it at first. 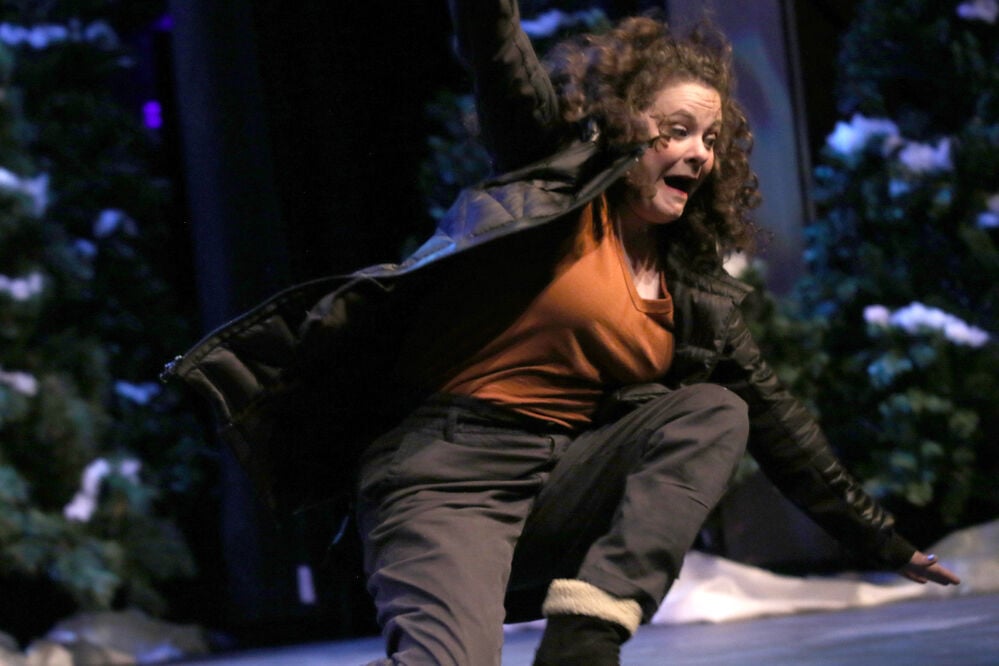 Shelly (Lauren Newell) starts to literally fall for her best friend after a heartfelt conversation about the crappy dates the two of them have been on recently. 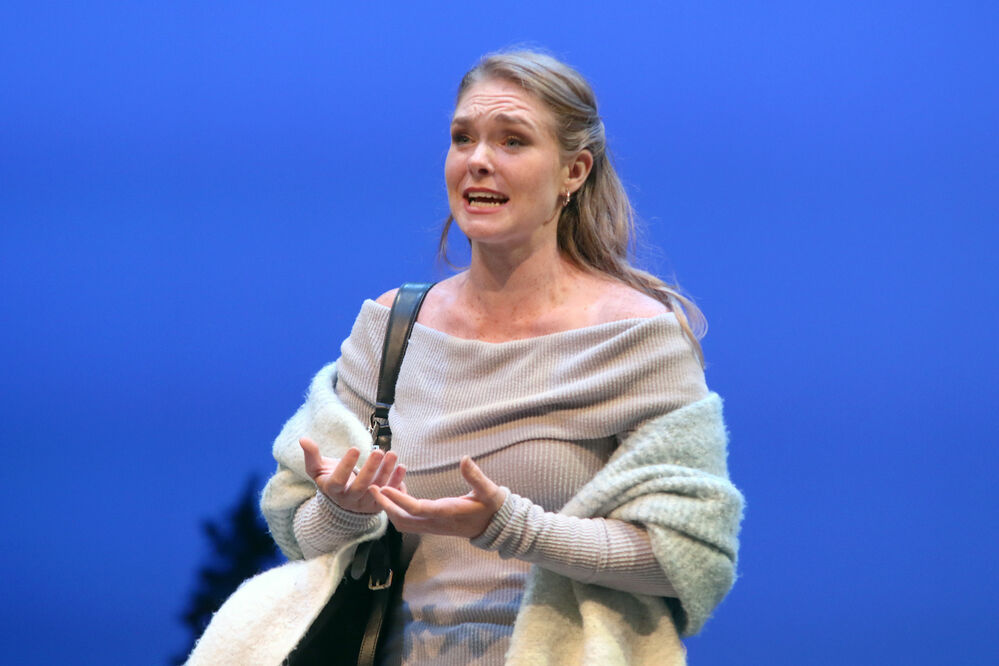 Hope (Brittany O'Connell) professes her love for her high school sweetheart a little too late.

Whether you’ve found the love of your life or you’ve been completely heartbroken, Theatre West’s final main stage show of the season “Almost, Maine,” has a story you can relate to.

This romantic comedy contains eight different vignette scenes of couples experiencing the nuances of love in some way in the small, unorganized territory of township 13 in Maine called Almost. While each scene exhibits a realistic incident, under the mystical Northern Lights, a glimmer of magic escapes into each story.

Bond’s more recent endeavors have been directing larger-than-life shows, the latest of which having been the comedic thriller “The 39 Steps” in June for Theatre West. Bond said it was a nice change of pace to do something that felt more natural.

Bond said not only was the show something rather new for him, it also was something different for the Theatre West company, too.

“I don’t think I’ve seen them (Theatre West) do anything quite like this either,” he said. “It just feels like it’s a new thing. I just love the naturalism about it. It just — I don’t know — it gives me a warm fuzzy.”

Not only is the show broken up into eight different short stories, or scenes, about love, but each story creates a physical, visual image of a concept relating to love — from literally falling in love to feeling the pain of love to recognizing love for the first time.

“This show has a timeless message about love that can relate to literally anyone who watches it,” Dustin Petrillo, who plans a character named Dave, said. “I think it’s just an engrossing show.”

Bond said, “Each scene that I’m working on, I look at it and there is a moment or a thing that happens that makes me remember a moment in a relationship I’ve had. They’re all far enough ago that it’s like, I didn’t even think about that relationship until I see them going through something. It’s, ‘Huh! I’ve been through the same thing.’”

With the style of the show being eight separate stories, it also gave the actors a new challenge for their performances.

“We’re only assigned one scene, for the whole play out of the eight,” Christopher Handcock, who plays a man named Jimmy, said. “We really get to focus in on that one character for that small amount of time. You can picture what their life is like before and after, but you only get eight pages or so of text to work with. And that’s challenging, but also really fun.”

Avery Lux, who plays a woman named Rhonda, said, “It’s challenging too because in other shows, you’re maybe on stage more, but you’re not as maybe involved in all the scenes. But with this one, even though you’re only getting one scene, that scene is about you and the other person on stage and your connection with the other person.”

Despite the unique challenges the show presents, it still has that sense of calm throughout the production. Lux described it as a “perfect mix of sprinkled-in comedy and sentimental love stories.”

For company manager Staysha Adams, it hits even closer to home.

“It’s a perfect example of finding and keeping love in a small town like Scottsbluff,” she said.

A new face has been strolling around the Western Nebraska Community College campus the past couple of weeks. With fall classes right around th…

OLIVIA WIESELER: How 9/11 impacted a 3-year-old

The Gering Courier's Olivia Wieseler reflects on how 9/11 affected her world, even at the age of three.

I was looking through a manuscript in our archives and found a manuscript by Charlie Fenster. He interviewed Glen Kellett on Nov. 3, 1992. Gle…

On Aug. 7, around 11:30 a.m., Jaci and Jarvis Brill were on their motorcycles waiting at a red light near Rapid City on their way to a restaur…

How do you grind corn? Local fourth-graders learn how at Legacy of the Plains Museum

Gering fourth graders were among many local students who visited the Legacy of the Plains Museum last week for hands-on learning about the evolution of farming technology.

Best friends Dave (Dustin Petrillo) and Rhonda (Avery Lux) have trouble figuring out how to express their love for each other when they don't recognize it at first.

Shelly (Lauren Newell) starts to literally fall for her best friend after a heartfelt conversation about the crappy dates the two of them have been on recently.

Hope (Brittany O'Connell) professes her love for her high school sweetheart a little too late.