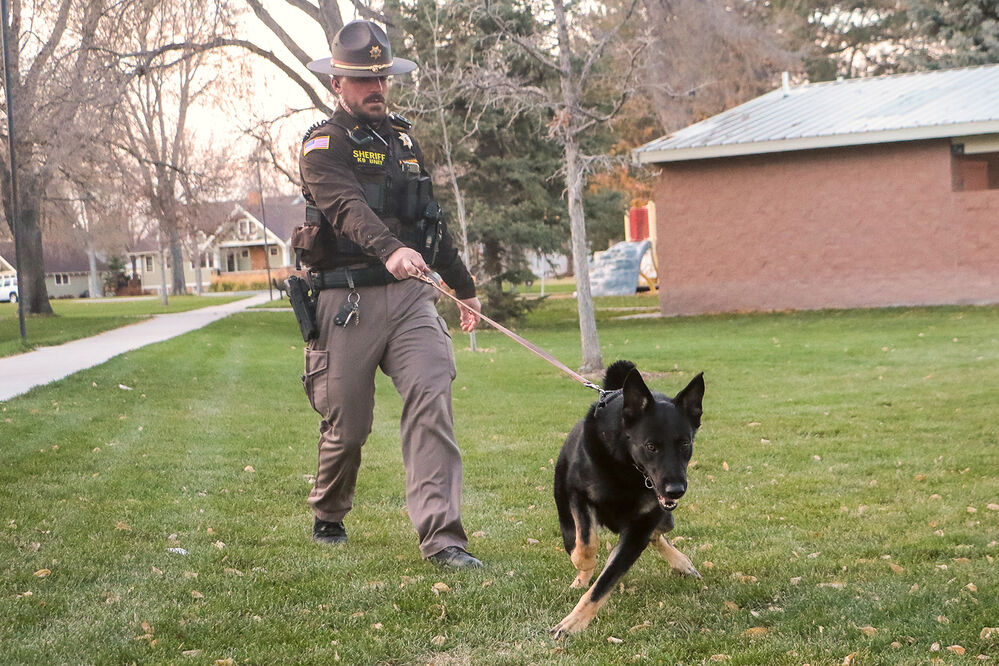 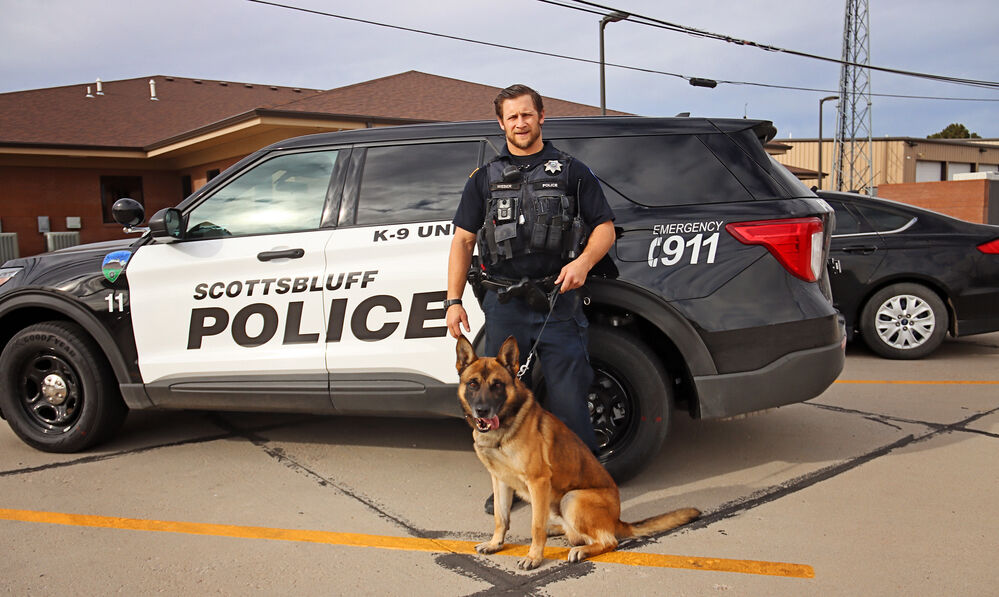 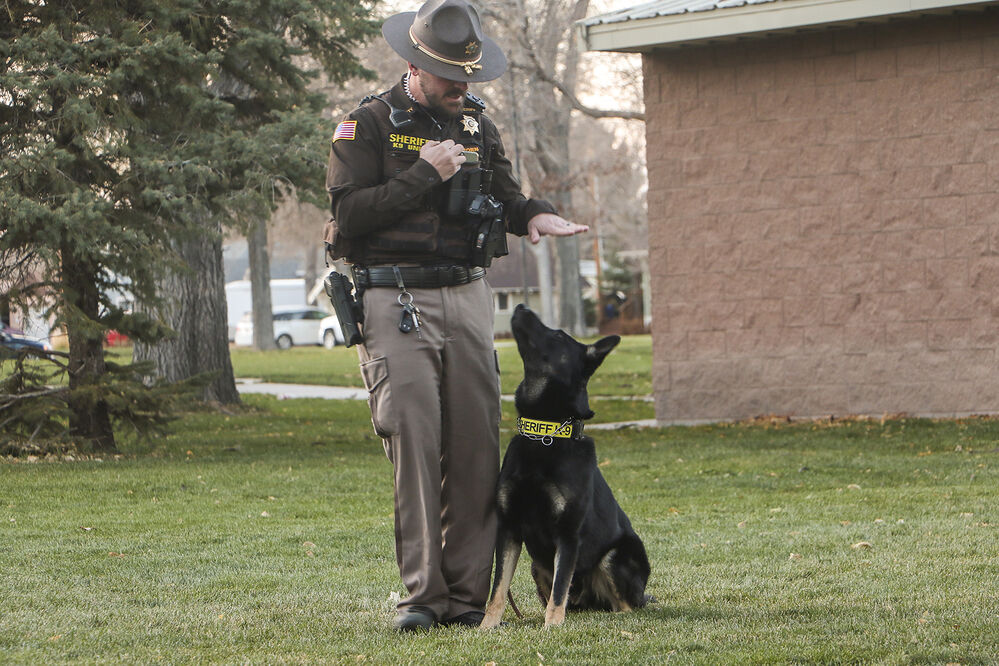 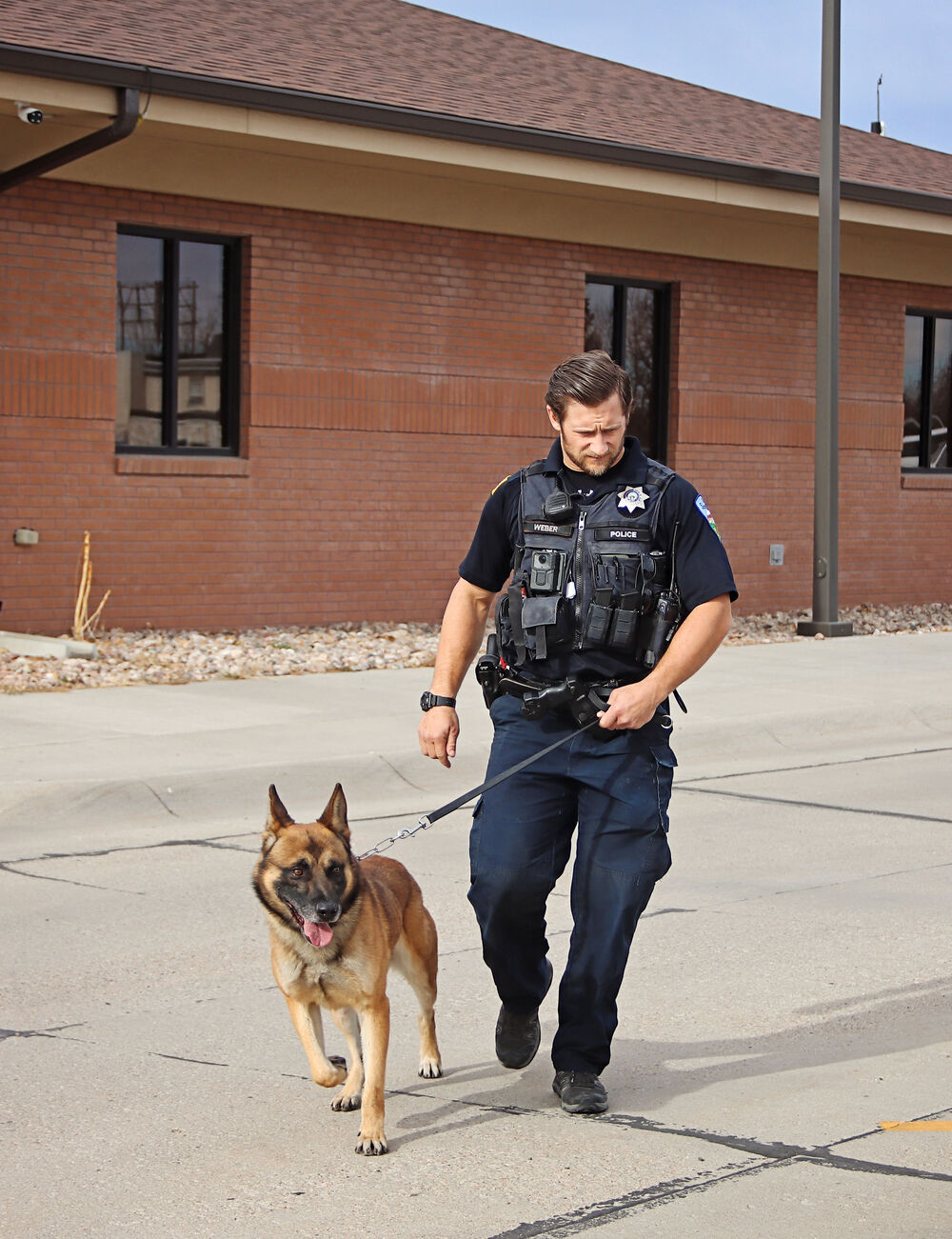 Officer Tyler Weber, the Scottsbluff Police Department's newest K-9, walks with Duke, who joined the department last week. Weber and Duke will begin working toward state certification and Duke will then join his handler on patrol. 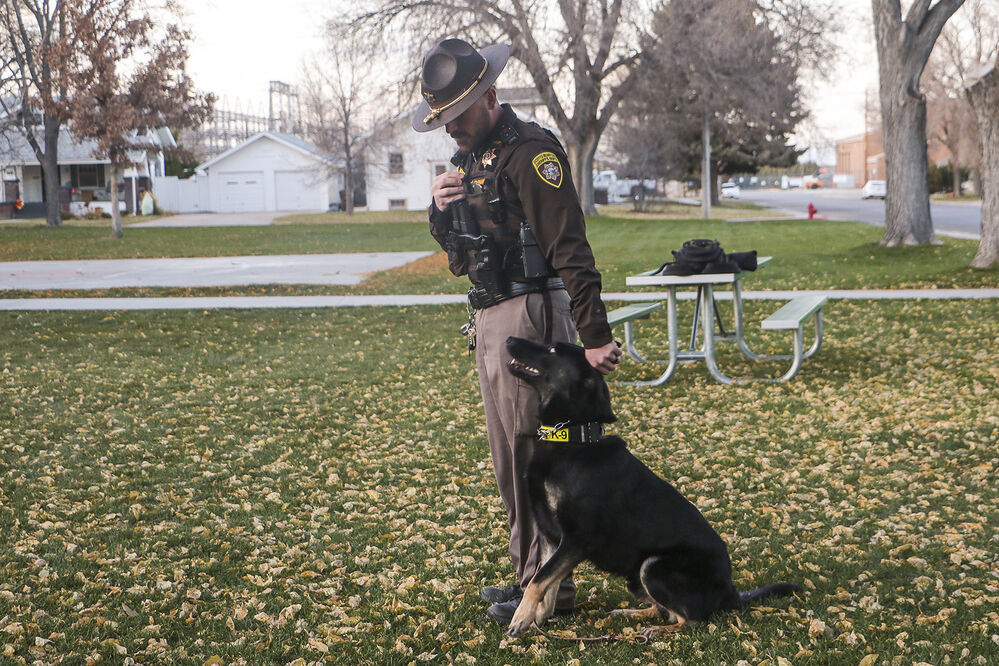 “I’ve always thought it was cool to see other officers running K-9s,” he said. “I remember watching him (Perkins) do a demonstration. That was 12 years ago now ... and that was my goal.”

After serving in the U.S. Army, he pursued his goal of being in law enforcement. He worked for the Kimball County Sheriff’s Department, where he developed an interest in drug interdiction work, something that will compliment his new pursuit as a K-9 handler at the Scotts Bluff County Sheriff's Department. He and his new partner, Frodo, are among two new K-9 teams in the Panhandle.

“I like getting drugs off the street,” he said. “The more I’ve done the job, the more I’ve seen people that are affected from them.”

More and more, he said, he sees young people using “some of the worst of the worst” and it motivates him to do more. K-9 teams are just one of the tools that can help take drugs off the street, he said.

Osborn will work with Frodo, a German Shepard named after the Lord of the Rings character by an Ohio K-9 supplier and dog training center, Working Dogs International, at which he was raised and trained. The dog comes from Czechoslovakia. Though lots of K-9 officers choose to change the names of the dogs departments have acquired, Osborn opted to stay with the “Frodo” moniker, though he can likely expect a lot of questions about the dog’s name in the future.

“He knew his name well,” he said of the reason he opted to stay with it.

Osborn trained with Frodo for two weeks at the Working Dogs International and has been training with him regularly.

“I train at least four days a week with him,” he said.

Osborn and Frodo are training to complete state K-9 certification, with the state of Nebraska putting into place standards for police service dog teams that took effect in January 2015. They are working with a Nebraska State Patrol instructor stationed in Sidney. During training exercises, Osborn runs Frodo through different scenarios to develop the dog's skills.

Dogs are effective tools, Osborn said. Frodo is a dual purpose dog, meaning he can detect drugs and also work to apprehend suspects, track people who are lost or missing and even find evidence. During a demonstration, Osborn used a Star-Herald photographer’s driver’s license to show how the dog can take a simple item and find it using human scent.

In tracking and apprehension of suspects, he said, dogs are also an effective tool. He notes that suspects will exhibit more fear of a dog than police officers in some situations.

Asked about anything that has surprised him about being a K-9 officer, he said, “You know, it’s double the amount of work that I thought it was going to be. It’s like having two jobs. One job is having to do everything that a law enforcement officer does, but then I also have a partner in the back. I have to make sure he is fed. I have to make sure that I get his training right, that I’m dialed in with his narcotic detection, tracking, recovery and patrol work, and his obedience, all of it.”

He describes Frodo as an awesome dog.

“He’s very, very intelligent,” he said. “He thinks things through.”

Scotts Bluff County Sheriff Mark Overman said the department has been without a K-9 program for four to five years. The department had some funds to restart the program, but Osborn took on a lot of the task of fundraising for the dog and his needs, which will be ongoing. He estimated it is in the neighborhood of $30,000 to purchase the dog and equipment purchases, from outfitting a patrol unit to purchasing other supplies.

He said he is looking forward to seeing success in the K-9 program as lead by Osborn. It’s a big commitment to be a K-9 handler, he noted, with officers on call, as well as the additional work of having to train and keep training the dog. Frodo will live and work with Osborn as well, which is a commitment for Osborn and his family.

Like Frodo, Duke is a dual purpose dog, able to do narcotic detection as well as patrol work that will include apprehension, tracking and evidence recovery.

Weber, who previously worked as a K-9 officer with the Alliance Police Department for five years, spent last week outfitting his patrol vehicle and going through equipment after Duke arrived. He’s enthusiastic about the K-9 program.

“I’ve always enjoyed working with dogs,” he said of his interest in the program. “I’ve trained dogs from when I was younger; they were hunting dogs usually. I enjoy the challenge and the reward of working with them and training them successfully to fulfill a job.”

Like Frodo, Duke will have to complete the state certification process before he will actively be on patrol. However, with Weber and Duke having had previous training, they are working with a Nebraska State Patrol instructor in the Panhandle on drug detection and other skills. They’ll complete a few weeks at the Nebraska State Patrol’s K-9 training program for apprehension skills and others that Duke and Weber will use on patrol.

Duke will live with Weber at his home, where Capone, the K-9 he had in Alliance, is also a part of the family. Weber said he expects it will be a smooth adjustment once he sees how the dogs interact with each other. He was already familiar with Duke’s skills through videos provided by the Grand Island department, but in working with him last week, he got to see first-hand Duke’s skill level.

“He’s high-driven,” he said. “We just had our first training session, just working narcotic odors. It’s a simple training drill. It develops the handler and the dog. ... We’re starting from the baby steps and we’re working our way up.”

Scottsbluff Police Chief Kevin Spencer told the Star-Herald that the department was able to acquire the fully-trained dog for about $7,000, just more than half the cost of a new, untrained dog.

The department hasn’t had a K-9 program since the June 2016 retirement of its last K-9, Riki. Riki had been with the department for 10 years. Due to staffing issues, the expense and other ongoing projects that needed to be accomplished, Spencer said the department opted not to have a K-9 for a few years before re-establishing the program.

“We have always felt a need for the K-9 program. ... A department of our size, with our call volume, should have a K-9.

“We go to a lot of narcotic violation calls in which the dog can be used. I expect that will be the majority of the calls for service. When we do need the dog for other type of work, to include traffic (responding to traffic stops in which drug activity may be suspected), it is just invaluable to have a K-9 here at the ready. It just makes sense.”

Spencer described Duke as a “social” dog and he expects he and his handler will be involved in community outreach activities throughout the year.

Gretchen Deter from the North Platte Valley Museum wrote an interesting paper located in our archives about this site. She described the treme…

In late 1827 upon his company’s arrival back to St. Louis, Missouri, General William Ashley decided to send a group of men back out west to ge…

The other day in the library I heard a mother tell her child, “Honey, we have that book at home, let’s get something different.”

Gering councilman Ben Backus announced that he is running for the Gering mayor seat.

SENIOR SPOTLIGHT: Olivia Leypoldt readies for the next chapter

Officer Tyler Weber, the Scottsbluff Police Department's newest K-9, walks with Duke, who joined the department last week. Weber and Duke will begin working toward state certification and Duke will then join his handler on patrol.