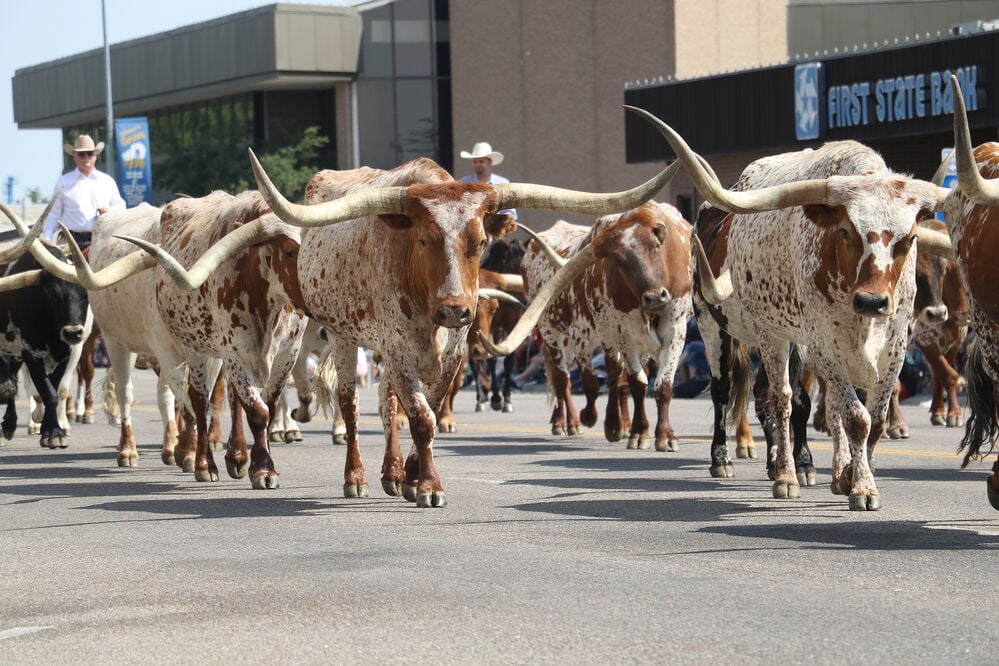 In honor of the centennial celebration of Oregon Trail Days, a herd of 60 longhorns were driven down 10th Street during the parade Saturday morning. 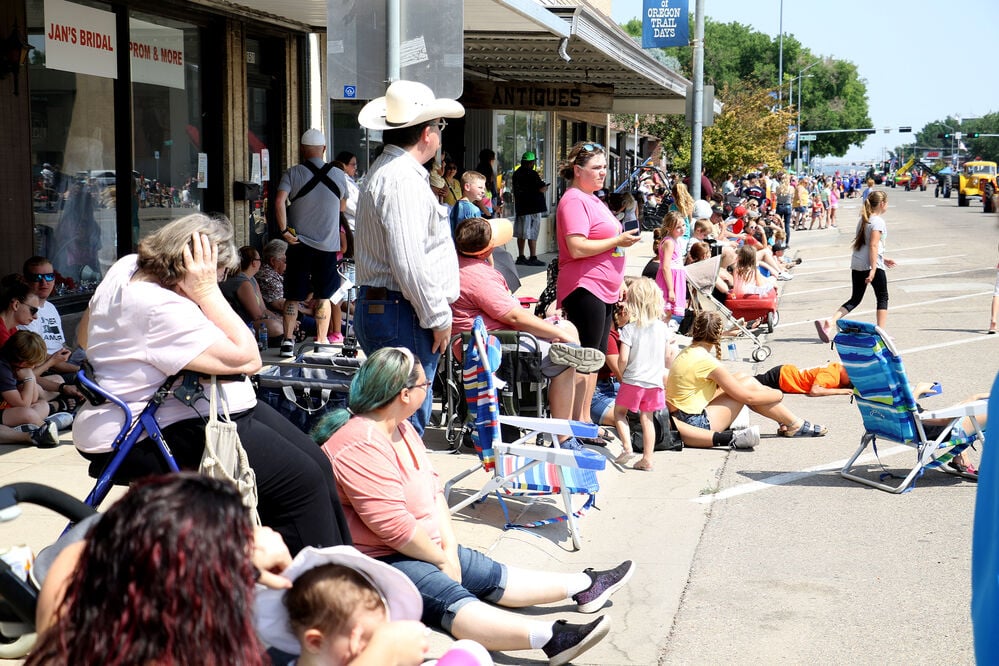 Thousands of people lined the sidewalks on either side of 10th Street in Gering Saturday morning to watch the hour-long Oregon Trail Days Parade.

On Saturday morning, people young and old ran around the Gering High School parking lot to add finishing touches to parade floats before the Oregon Trail Days Parade took off down 10th Street.

Greg Longoria and Sylvia Lopez were adding some last minute piñata decorations to their truck, which would cart their daughter, Lisandra, through the parade. Lisandra won the intermediate division for Cinco de Mayo Queen.

While the family has been coming to the parade for years, this year was only their second time actually being in the parade. Lopez said she enjoys it because it gets the whole family together.

“It’s fun,” Lopez said. “We bring all the family and the kids here.”

Since they couldn’t throw out candy due to safety precautions set by the parade committee, they decided they’d still try to represent the candy with their piñatas.

“We incorporated the piñatas (because on) Cinco de Mayo, they break piñatas, they throw candy — but you can’t throw candy (here),” she said. “But we can at least (represent it).”

“We did want to do a few events because we wanted this be our 100th, and we had to do something last year. So last year was our 99th,” parade co-organizer Mike Minzey said. “We are full force, full swing (this year).”

Minzey, who’s been helping with Oregon Trail Days for over 30 years, most of those being on the parade committee, said that despite the turnout for parade entries being lower than usual this year, he thought the parade was doing great.

“It’s going pretty good. I’m looking over the lot, and it looks like we don’t have as many floats as we have had,” he said. “It’s bigger than any of the other events, so we’ve got to have that. … So, my feeling on it, I’m glad it’s back.”

The hour-long parade was led by the American Legion Color Guard and a long stretch of first responders followed by 60-head of longhorn cattle. From marching bands to silly bicyclists to Miss Nebraska to three border collies shepherding a herd of sheep, 10th Street in Gering was full of excitement Saturday morning.

The parade still proved to be one of the biggest hits of the weekend celebration as spectators lined both sides of the street to watch the entertainment. It’s this excitement that keeps the parade organizers like Minzey and John Ewing going year after year.

The parade only got things started for the jam-packed Saturday festivities. Following the parade, the Old Settlers Luncheon took place at the Gering Civic Center while Legacy of the Plains Museum hosted a barbecue. The mud volleyball tournament, the craft fair and the Vera Dulaney Memorial Art Show went on throughout the entire day. The afternoon saw the Panhandle Quilt Guild Regional Quilt Show, the chili cook-off, the horseshoe tournament and the carnival opening up for the evening. The day ended with beer and wine tasting and the Oregon Trail Days Music Festival at Five Rocks featuring Sawyer Brown and Ned LeDoux.

Oregon Trail Days will wind down Sunday with the carnival open from 4 to 8 p.m. and the Gospel Jubilee featuring the Hebbert family and other special guests in Legion Park at 7 p.m.

Each week the Courier will highlight a new staff member at Gering Public Schools. This week is Vanessa Hernandez, Lincoln Elementary preschool teacher.

The Gering City Council approved plans to annex several plots of land on Wednesday, Sept. 15, causing some discussion during what was otherwis…

Six students are learning the ins and outs of careers in police, fire and even the court system in a public safety academy started at the Geri…

Hiking through the Wildcat Hills

A new face has been strolling around the Western Nebraska Community College campus the past couple of weeks. With fall classes right around th…

Runners participating in the new Monument Marathon Relay race explain how they are preparing for this Saturday.

On Aug. 7, around 11:30 a.m., Jaci and Jarvis Brill were on their motorcycles waiting at a red light near Rapid City on their way to a restaur…

In honor of the centennial celebration of Oregon Trail Days, a herd of 60 longhorns were driven down 10th Street during the parade Saturday morning.

Thousands of people lined the sidewalks on either side of 10th Street in Gering Saturday morning to watch the hour-long Oregon Trail Days Parade.