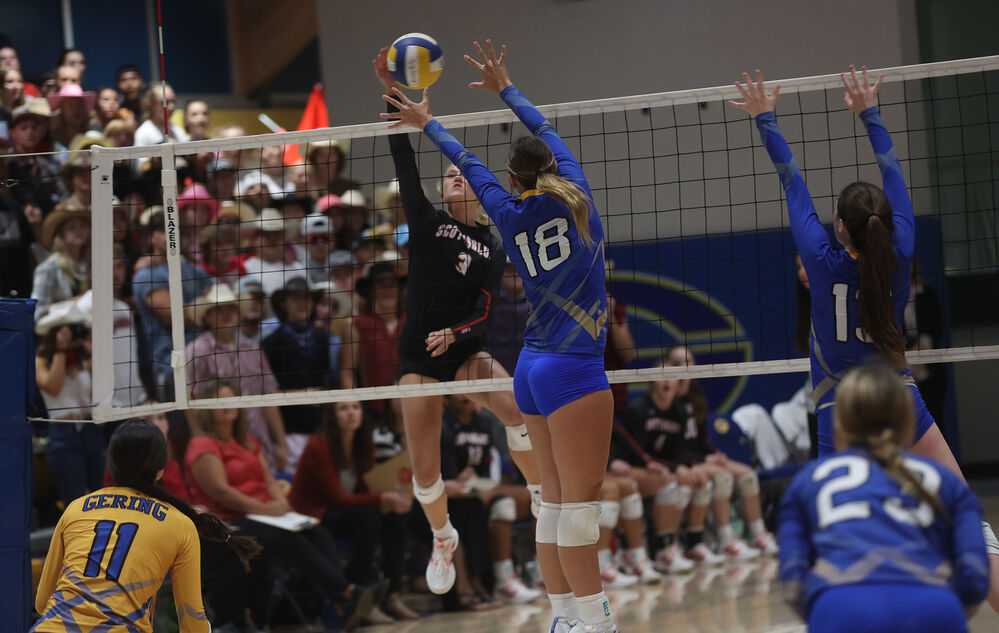 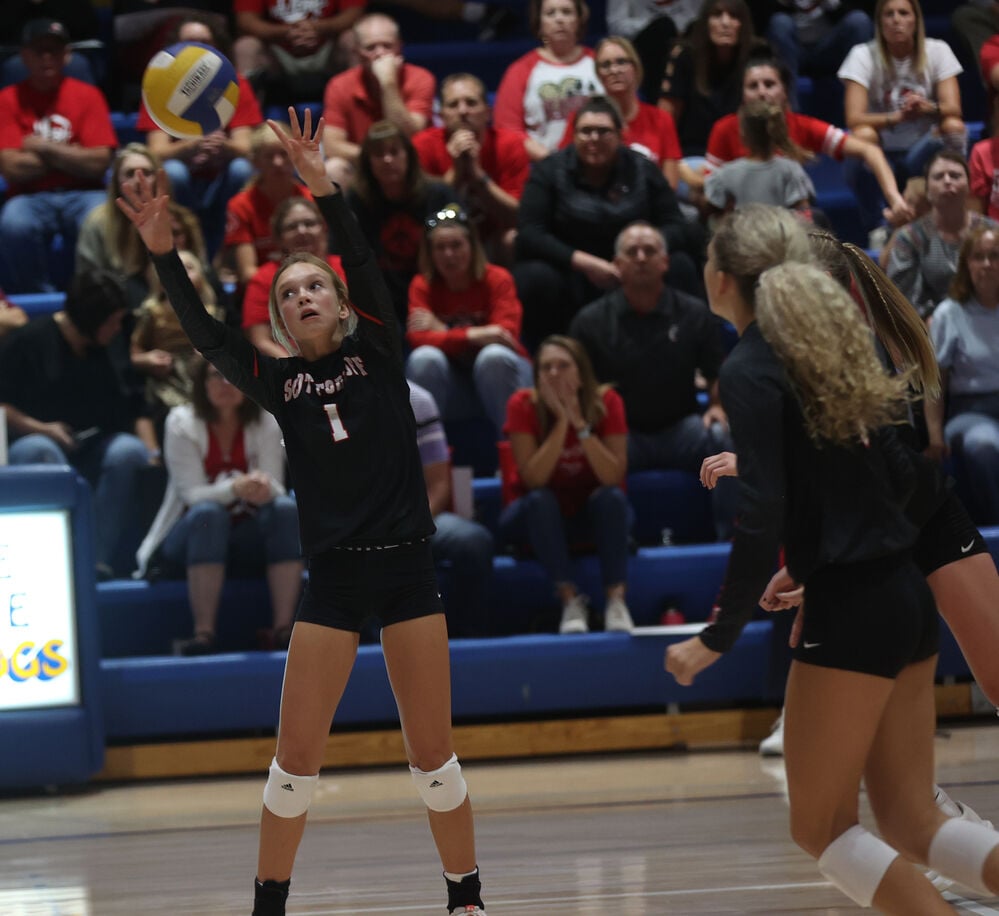 It was a rocking Gering High School gym Tuesday as crowds witnessed a battle between cross-town rivals Scottsbluff and Gering. The fans got their money’s worth as the high-energy contest saw Scottsbluff receive big service runs, including 12 points in the third set by Peyton Kriewald, to help the Scottsbluff volleyball team to a 4-game win over Gering with scores of 25-22, 16-25, 25-15, 25-22.

Scottsbluff coach Leslie Foral said they had their ups and downs, but strong service runs were a big key to the win.

“We had definite moments where we were on fire. Our passing was good, our setting was on, and we were attacking,” Foral said. “There were times we let off the gas a little bit and that hurt us. But, Gering is a good team, and they are never going to back down. I told the girls at the end that these big games are just finding a way to win. I thought they did a good job of that.”

Service runs were huge for the Bearcats in the three sets that they won, and Foral was pleased with that aspect.

“With our style, we work on aggressive serving, and we know we are going to have missed serves, but I thought the girls came in and did a good job of keeping the ball in play when they needed to,” Foral said. “Megan Bewley was hitting the zones that I was calling, and I thought she did a really good job serving. Peyton Kriewald had a long service run and then went in and played some great defense. The runs definitely helped us.”

The first set saw Gering jump out to a 6-3 lead behind three Alex Gonzalez-Orozco points. That was when Tierra West went on a 5-point service run for a 9-6 lead. Gering came back to tie the set at 19-19 on two Sydney Huckfeldt service points and two Cami Newman kills. The two teams were tied at 21-21 when Bewley had two service points for a 24-21 lead. Scottsbluff won the first set 25-22.

The second set saw Gonzalez-Orozco serve three points for a 6-2 lead, and the Bulldogs pushed the lead to 14-6 on back-to-back Newman kills. Scottsbluff tried to come back as Bewley had three service points to cut the lead to 14-10.

Gering responded as Gonzalez-Orozco had two service points, and then Neveah Hrasky had four points for a 24-13 lead. Gering won the second set 25-16.

Scottsbluff took control of the third set early as Kriewald had an 8-point service run, including two ace services, for a 13-2 lead. Scottsbluff led 16-6 before Huckfeldt had two points for Gering to cut the deficit to 16-9. Gering got the set back to three points at 17-14 after two Newman service points, but a kill from Austyn Andreas and Paige Horne along with five straight points from Kriewald gave the Bearcats the 25-15 third set win.

Scottsbluff continued the strong serving in the fourth set as Bewley had seven straight points for a 7-0 lead. Gering came back to cut it to 7-4 on three Newman points. Gering kept fighting back, cutting the lead to 14-13 on two Sydnee Winkler points. Payton Burda stopped the Winkler run with a kill, and then Bewley went on a 5-point service run for a 20-13 lead.

Gering stopped the run, and Gonzalez-Orozco put together three service points to cut the lead to 21-19. Andreas came back to put Scottsbluff up 24-19 only to watch Hrasky serve two points and bring Gering back to 24-22, but that was it as Scottsbluff got the next points for the 25-22 win.

Gering coach Amanda Cochran said they will watch film and see what areas need fine-tuning as they prepare to take part in a tournament in McCook on Saturday.

“We had ups and downs. We are going to go back and look at our film and kind of process our game,” Cochran said. “We definitely had moments of good and moments where we have to figure out what went wrong.”

Ella Foote led Scottsbluff with 10 kills with three digs. Horne had seven kills, while Andreas and Jaliah Connelly each had four kills.

Bewley finished with a double-double of 39 set assists and 14 digs. She also had three kills and three aces. Kodee Teahon had 23 digs with two aces, while Burda had 11 digs and three kills. Connelly had 21 digs while West had seven digs, two kills and 35 set assists.

Gering was led by Maddie Ray with nine kills followed by Newman with eight, and Carleigh Pszanka and Ella Rotherham with six each. Newman also had three aces while Huckfeldt had two.

Gonzalez-Orozco and Winkler each had 22 digs, while Allison Parker had 14 digs and Ray finished with 10. Winkler had 21 set assists.

The Bulldogs will participate in the McCook Invite on Saturday while the Bearcats will play their next match at home against Chadron on Sept. 23.

The 8-1 Cougars downed the T-Birds on the road 70-59 to finish out the Thanksgiving Classic in Casper, Wyoming.