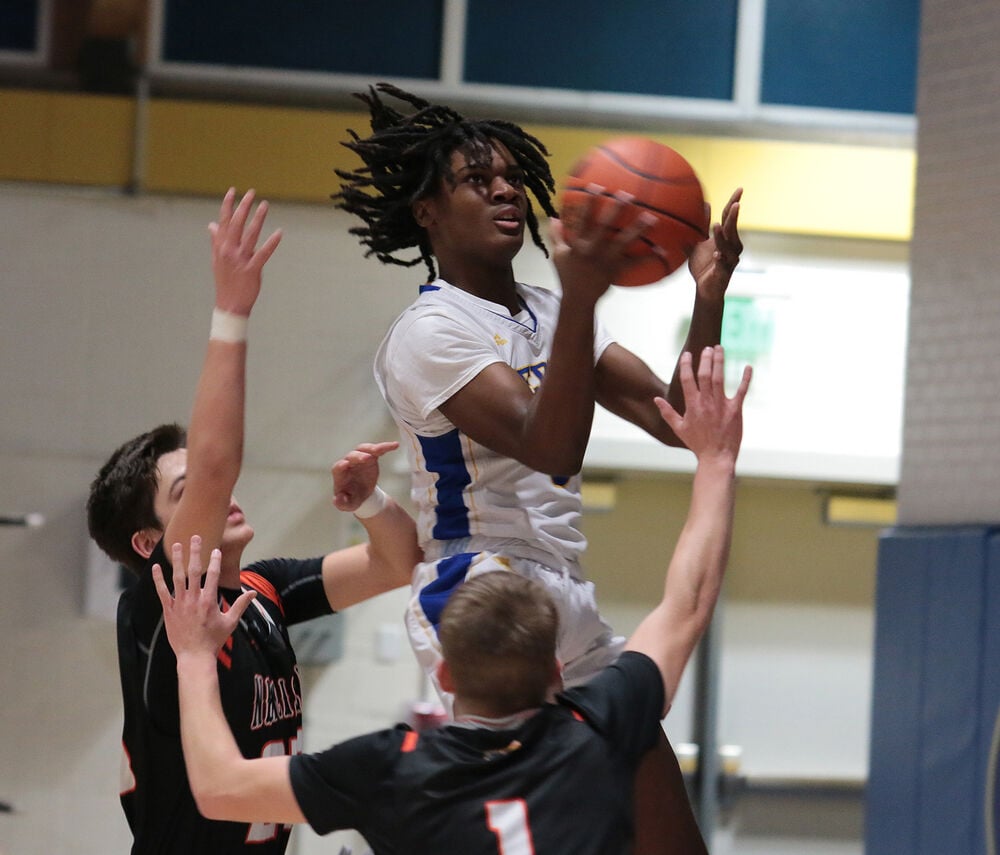 Gering's Ethan Douglas rises above the Newcastle defenders for a layup. 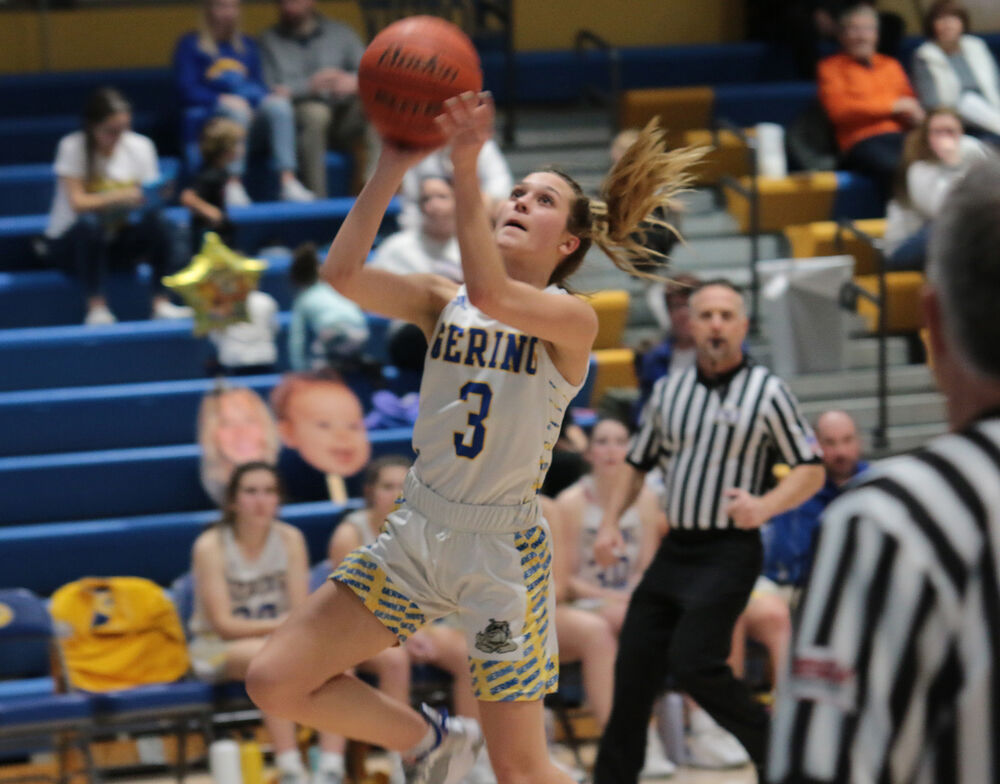 Gering's Sydnee Winkler goes up for an open layup in the Bulldog's home loss to the Newcastle Dogies. 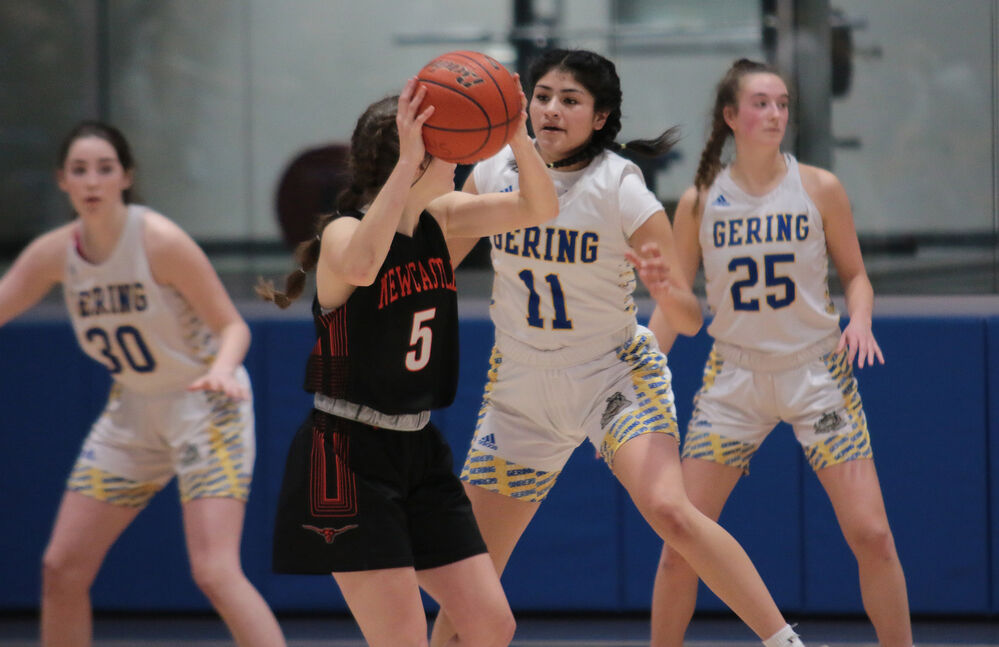 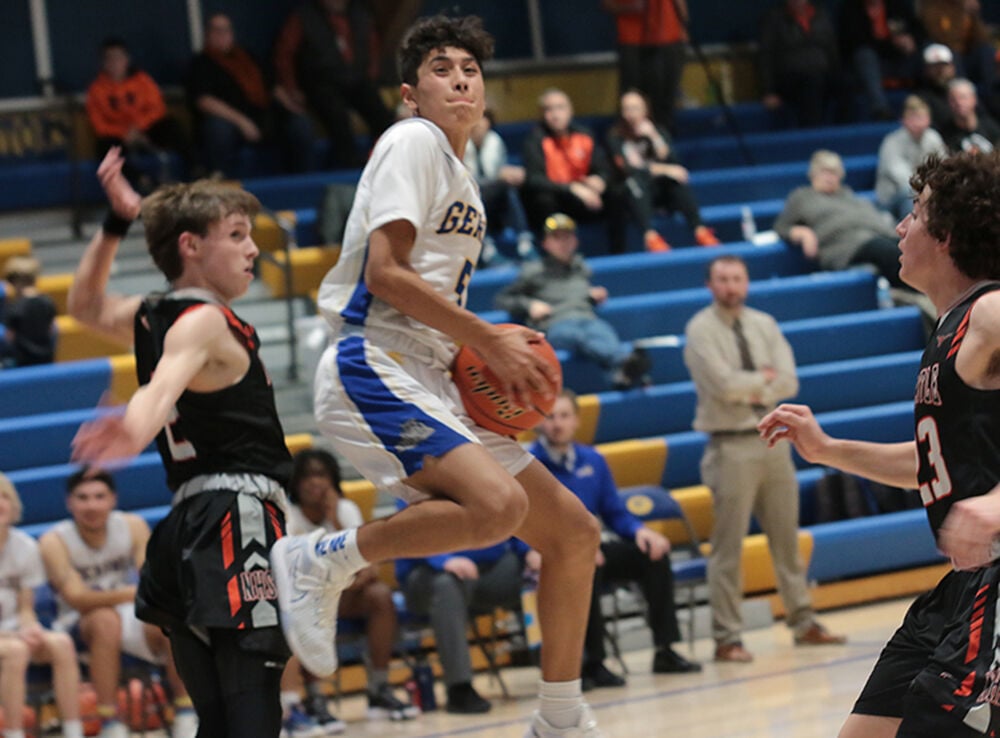 Gering's Uriah Ybarra splits two Newcastle players on his way to the basket in the Bulldog boys' 63-57 defeat.

In a home game against the Newcastle Dogies out of Wyoming, the Bulldogs fell in a pair of losses on Saturday, Jan. 8. The girls would lose 61-41 while the boys fell 63-57.

The Lady Bulldogs, who almost made a comeback against Sidney on Friday, didn’t have that same energy on Saturday as they dropped the contest against the Dogies.

“I think last night’s game did take a lot out of us, but this is very poor execution on our part on offense,” coach Steve Land said. “We were very impatient. Once (Newcastle) found that we weren’t shooting the ball very well, they just packed into the zone. We weren’t moving the ball, settled for outside jumpers that weren’t falling. They’re running out after we take a quick shot and they scored some transition baskets that hurt us early, and that’s where they built the lead.”

With multiple players out, it was hard for the Bulldogs to find a rhythm as the team struggled with turnovers and fouls throughout the game.

“We had a couple guards gone today and some kids out with an illness so it’s kind of tough,” Land said. “We have to have a mixed man mentality to step up, come in and contribute, and I don’t think we got that today.”

The first quarter was slow for both teams as no one scored until around four minutes in, with the Dogies striking first. The Bulldogs were down 11-7 at the end of the frame and from there, Dogies maintained control.

By halftime, Gering was down 26-19. The second half was much of the same as the Dogies kept their foot on the gas.

Newcastle was able to expand the lead to 46-30 by the start of the fourth frame and Gering wasn’t able to keep up.

The Bulldogs would drop their second straight and fifth of the season to move to 6-5 with the Dogies improving to 4-1.

The leading scorer and only player in double figures for the Bulldogs was Nickie Todd with 10 followed by Carleigh Pszanka with nine.

With about a week before their next game, Land said the girls have a lot they will need to work on in practice.

“We’re going to really mix it up in practice and our intensity has to improve,” Land said. “Defensively, we have so much going on that’s wrong.”

The boys game stayed close until the end but Gering ultimately fell 63-57.

The Bulldogs kept up with the Dogies and were within single digits, down 19-14 at the end of the first frame. By halftime, the Bulldogs were behind 30-24.

After trailing the entirety of the first half, the Bulldogs tied the game at 45 to finish out the third period. From there, the game was back and forth.

“We just had to bring the energy on the defensive end, get out in transition since they were playing the zone and we started really doing that,” coach Kyle Cotton said.

The Dogies would take the win after controlling the final minute of the game and the Bulldogs committing multiple turnovers.

“In the end, we had way too many turnovers; it’s been our Achilles' heel all season. We’ve got to get them cleaned up and that was really the difference,” Cotton said.

After the close defeat, Cotton said the boys will work on what they have been, but also toward winning games like this.

“We’re just going to get to work, keep working on the same things and trying to improve,” Cotton said. “We will work on mental toughness, situational stuff, and taking care of the ball. At some point, everything we’ve been doing is going to take hold and we will be able to take care of the ball and win these types of games.”

Three players were in double figures for the Bulldogs. Jacob VanAnne led with 20 points while Eli Marez, and Jackson Howard each had 10 points apiece. Kaden Bohnsack followed with eight points.

The Bulldogs will travel to Gordon-Rushville on Friday, Jan. 14 to take on the Mustangs.

The Bulldogs down the Indians in a matchup in Gering on Thursday.

In their first home game of the semester, the Cougars downed the T-Birds on Monday.

A look back at the top sports stories of 2021 in Gering.

No. 10 WNCC runs by Central Wyoming

Cougar women get their 15th win of the season in their first game of the semester against the Rustlers.

Gering's Ethan Douglas rises above the Newcastle defenders for a layup.

Gering's Sydnee Winkler goes up for an open layup in the Bulldog's home loss to the Newcastle Dogies.

Gering's Uriah Ybarra splits two Newcastle players on his way to the basket in the Bulldog boys' 63-57 defeat.