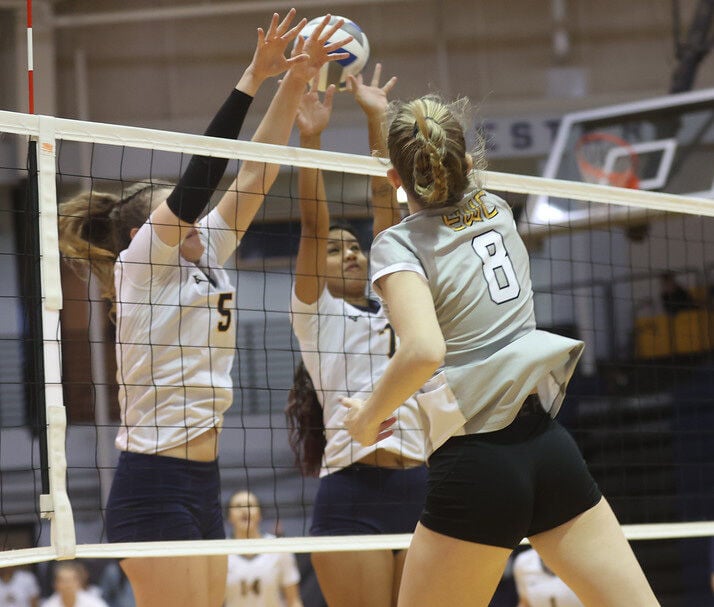 Lancer Makenna Reinert goes for the kill as Angel Nahinu (7) gets her fingers on the ball. Ale Meoni (5) also goes for the block. 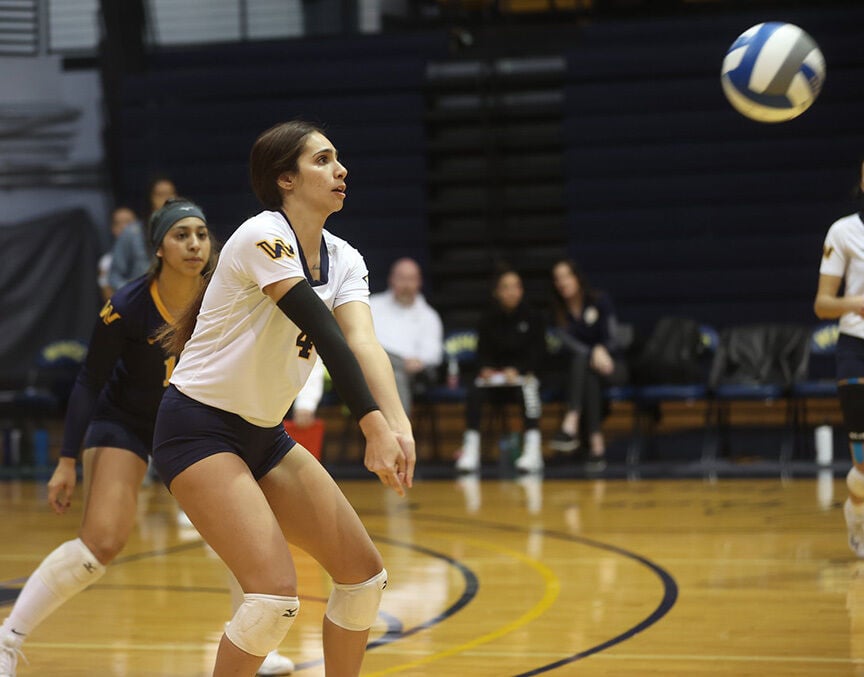 Mariah Fukumoto prepares to get the dig in Saturday's match against EWC. 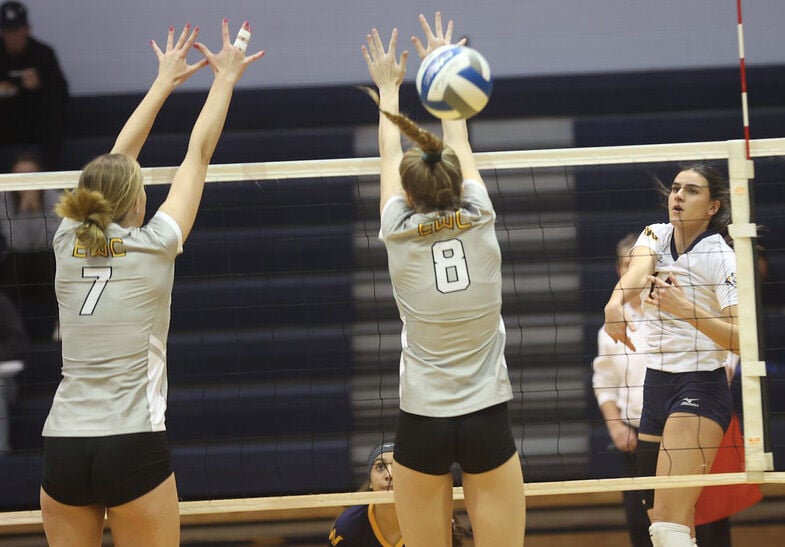 Erica Fava gets a kill past Lancers Victoria Anderer (7) and Makenna Reiner (8) during the loss.

The Rustlers, who lost to Northeastern Junior College on Friday in the Northwest Plains A championship, controlled the tempo of the contest for the most part in earning the 25-15, 25-21, 25-18 win over the Lancers.

Both NJC and Central Wyoming will now compete in the NJCAA national tournament Nov. 18-20 in Hutchinson, Kansas.

WNCC sophomore Macey Boggs said the Cougars played as well as they could, considering the amount of sickness that hit the team this week.

“The team played well in our game at first against EWC, but I believe that we still had more to give,” she said. “We did not show up to the best of our capabilities. However, we did have a lot of adversity with multiple girls being out because of sickness, including our starting outside Jenna (Curtis).”

Boggs said while it is disappointing that their season is over, she and the team accept the fact that they ended the season with a fourth-place finish at regionals.

“It was disappointing when our season ended; it still doesn’t feel real to me,” Boggs said. “I feel that we could have ended on a higher note. We are not satisfied with our ending but we accept it. It is crazy how fast my two seasons at WNCC went.”

Boggs' memories of playing at WNCC are high. In fact, she played both her seasons in one calendar year as her first season was played last semester when she helped the Cougars to the national tournament and then her second season just ended.

“Our season was very memorable and I will never forget it,” Boggs said. “Our team got along very well and I love each and every girl. I am thankful I got to play alongside of them. I am forever grateful for WNCC and the opportunities that it has given me. I will forever be a Cougar at heart and I would never change this experience for anything.”

The WNCC and EWC match was a memorable one. WNCC defeated the Lancers on Wednesday in the tournament and Saturday, the Lancers played well to get the four-set win.

In fact, the Highway 26 rivalry was back and forth for most of the match. EWC rolled off the first four points behind the serving of Vanja Tomic. WNCC came back to lead 5-4 behind four points from Ale Meoni. WNCC went back in front 13-12 behind three points from Hyleigh Fornstrom and led 17-14 on a Meoni ace.

The Lancers came back with six straight points from Neza Pec for a 21-17 lead and won the first set 25-21.

The second set saw the two border teams tied at 5-5. After a missed serve, Erica Fava reeled off five straight points for an 11-5 lead. The Lancers came back to slice the lead to one, 14-13, behind three points from Pec. WNCC went back up 21-17 on a Fava ace serve and won the second set 25-23.

WNCC led the third set 4-2 and later 7-5. That was when the Lancers changed the momentum as Alyssa George had four points, including an ace serve for a 10-7 lead. The Lancers went up 14-8 after three points from Jelena Jablanov and pushed the lead to 20-14 on a Halle Hogan point. Jablanov had two more points for a 24-16 lead, and the Lancers won the third 25-18.

WNCC came back to cut the lead to 18-15 on two points from Holleigh Jaime, including an ace serve. WNCC couldn’t get any closer as Makenna Reinert ended the match with a kill and the 25-19 Lancer win.

The Coaches of the Year went to Mackenzie Chrisman of NJC and Darshaya Gallard of Central Wyoming.

The Region IX All-tournament team included Feather, Fago and Sidney Bills of NJC; Templeton, Rasmussen and Langer from Central Wyoming; George and Pec from EWC; Fava and Fornstrom from WNCC; Carrasco and Linsey Whipple of Otero; and Parker and Baylee Peterson of Northwest. The tournament MVP was NJC’s Feather.

Bulldog volleyball ends season in Sidney on Tuesday during the B-8 sub-district. Red Raiders will face Bearcats in sub-district final.

Lancer Makenna Reinert goes for the kill as Angel Nahinu (7) gets her fingers on the ball. Ale Meoni (5) also goes for the block.

Mariah Fukumoto prepares to get the dig in Saturday's match against EWC.

Erica Fava gets a kill past Lancers Victoria Anderer (7) and Makenna Reiner (8) during the loss.