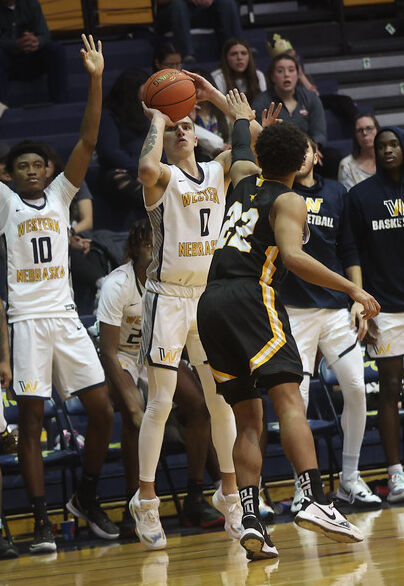 Cougar Carter Brown shoots from beyond the arc with Enzo Clouvel Urie putting a hand up to block. 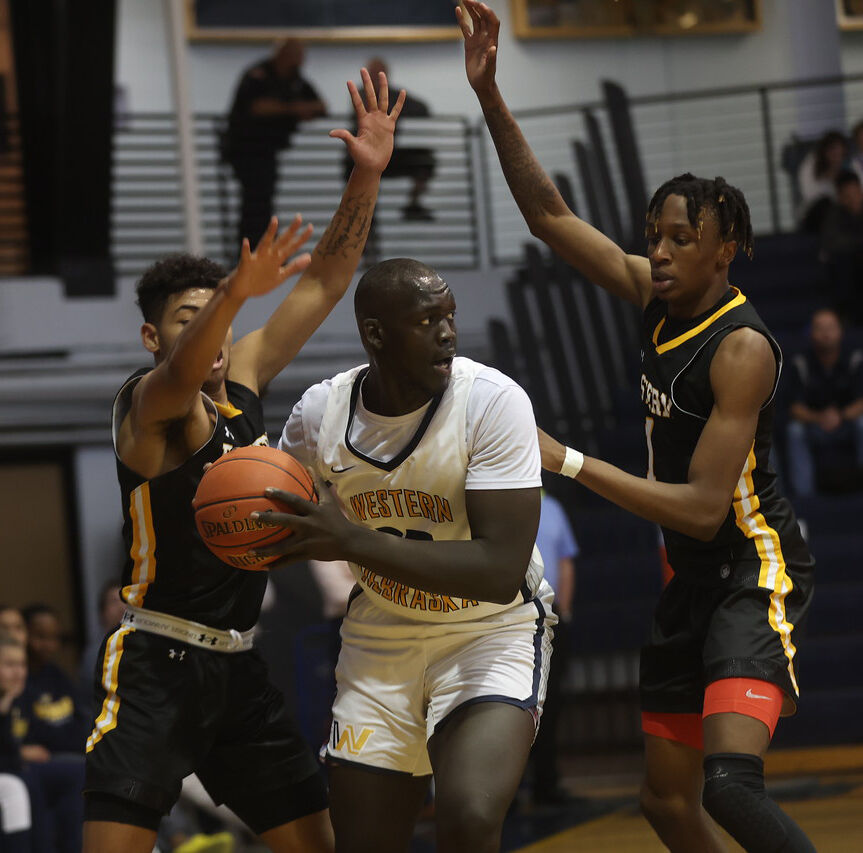 WNCC's Them Koang looks for someone to pass to with two Lancers trying to cause a turnover.

The Eastern Wyoming College men’s basketball team led from start to finish as the Lancers shot 48% from the field to earn the 90-63 win over the previously unbeaten Western Nebraska Community College Cougars Tuesday, Nov. 16 at Cougar Palace.

“We played extremely well especially in the first half. It was completely unexpected of the halftime score,” Andersen said. “WNCC made the second half tough. They did a great job. They flustered us and they came out with a lot of pressure. It is fortunate that we had a huge lead or the game would have been really close. They played really well, and we played well.”

Shooting was the big difference in the contest. EWC shot 38% in the first half and then went for 59% in the second. The Lancers were 8 of 21 from beyond the arc.

WNCC couldn’t buy a bucket, especially in the first half where they were 28% and 0-for-9 from the 3-point arc. WNCC did pick it up in the second half, shooting 49% while connecting on four-of-15 3-pointers.

The Cougars didn’t do themselves any favors from the free throw line either, going just 11 of 24 while EWC went 22 of 34.

Andersen said his team shot the ball well Tuesday night and that was the key.

“We shot well and then when we needed it, someone hit some threes,” he said. “We struggled a little bit defensively against their big kid (Them Koang). He is tough and a load. We will have to work on that. But I am proud of our guys coming over here. It was a great win. We know we have to play them again, and I am sure we will have a great battle when we play them next time.”

The Lancers went up 6-0 before WNCC sliced the lead to 6-4 on a Biko Johnson bucket. The momentum changed after that as EWC went on a 17-4 run to lead 23-8 on six straight points from Tom Mark. Carl Thorpe stopped the run momentarily, but the Lancers went on an 8-0 run to lead 33-12. EWC closed out the first half on a 5-0 run to lead 46-18 at intermission.

The second half saw WNCC score eight points behind Koang to cut the lead to 46-26. EWC came back to lead 59-32 on a bucket by Enzo Clouvel Urie. WNCC fought back as they went on an 11-0 run to trail 59-43. The Lancers kept controlling things as they cruised to the win 90-63.

EWC had four players in double figures led by Quincy Taylor with 18 points. Kayden Toldson and Nikolas Gustavson each had 17 points followed by Mark with 16 points.

WNCC had just two in double figures. Koang led the way with 20 points while Thorpe had 10 points. Thorpe also pulled down 11 boards.

WNCC will be back in action this weekend when they head to Twin Falls, Idaho, to face Community Christian College on Friday and College of Southern Idaho on Saturday. EWC will also be in Twin Falls this weekend playing the same teams.

Bulldog volleyball ends season in Sidney on Tuesday during the B-8 sub-district. Red Raiders will face Bearcats in sub-district final.

Cougar Carter Brown shoots from beyond the arc with Enzo Clouvel Urie putting a hand up to block.

WNCC's Them Koang looks for someone to pass to with two Lancers trying to cause a turnover.