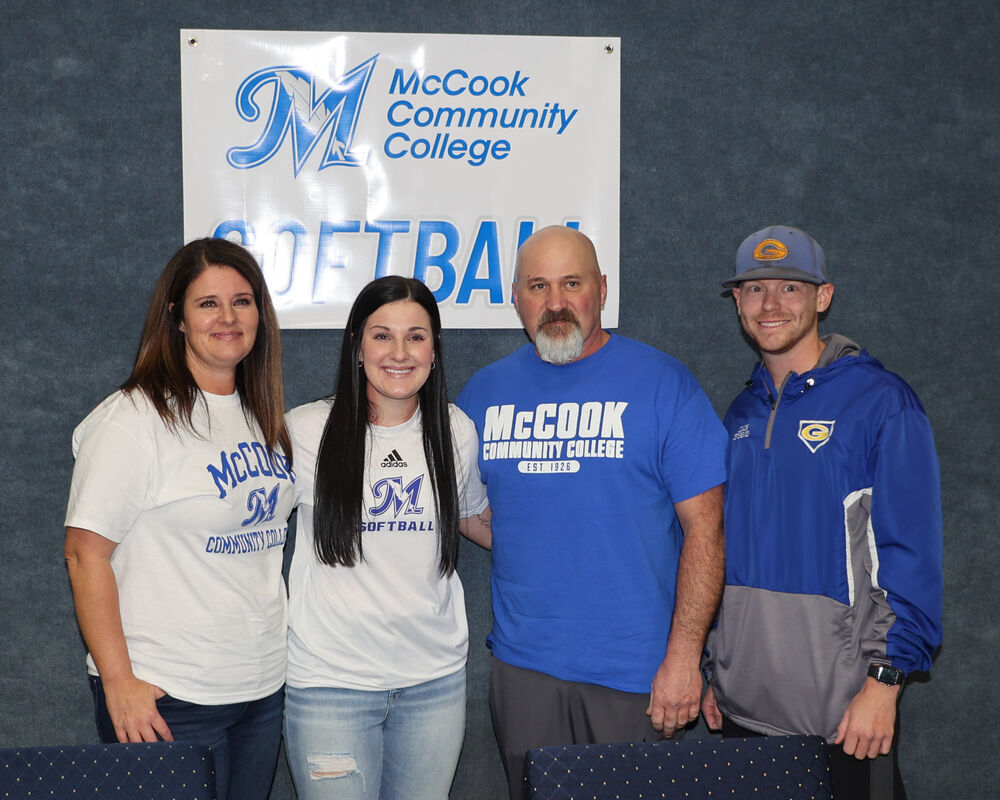 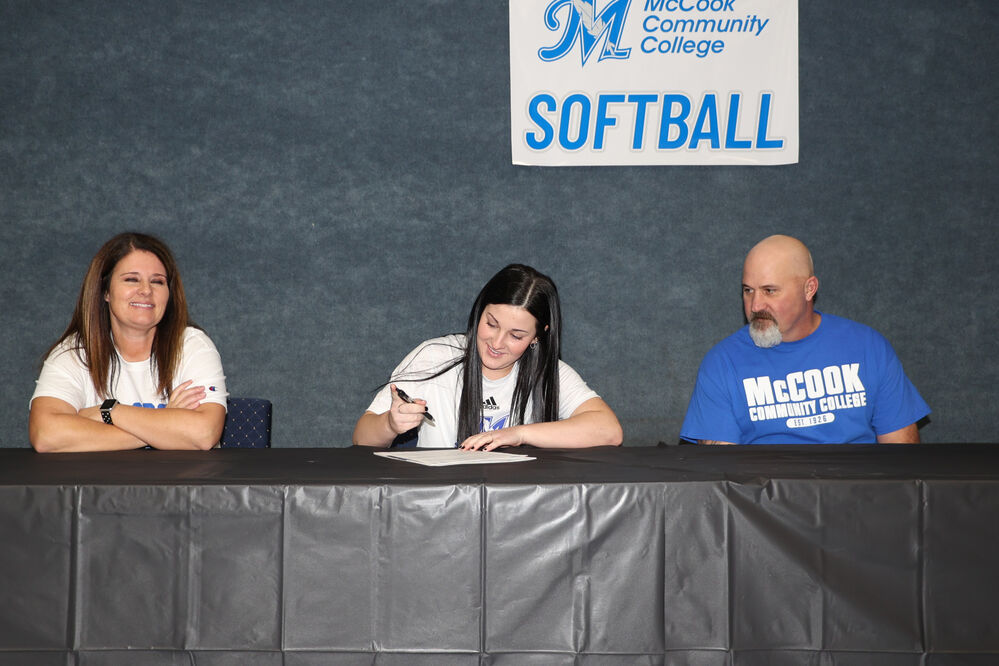 Brylee Dean signs her letter of intent to play college softball at McCook Community College while her mom, Heather Elliott, and her dad, Darryl Dean, look on.

Gering’s Brylee Dean has been a key contributor for the Gering softball program the past four years, and now the Bulldog senior will continue her playing career at the collegiate level after signing Thursday to attend McCook Community College for the next two years.

For Dean it was an easy decision to sign with McCook once she took a visit earlier this month.

“I took my visit in early December and I actually met the coach a few weeks back at one of my softball tournaments, and he gave a really good first impression to me,” Dean said. “He is really passionate about their program and I am super excited to be there.”

Dean was also looking at Hastings College, but McCook was just a perfect fit.

“That was one of my biggest things that I wanted to be close to home,” Dean said, “but still far enough away that I am not in home.”

She will leave Gering on a bright note. She holds two school season records with most hits in a season (58) and tied with Jennifer Barge with most doubles (20), which both were set in her junior year.

This past fall, Gering put together a strong season under first-year head coach Zach Ostergard.

“The season was awesome,” Dean said. “We didn’t think it would go as good but our bond between the girls was awesome. We had so much fun and competed way better than what we thought we would.”

Dean said Ostergard helped her so much with her softball game as well as helping her find a college.

“It was awesome and it was a fun year, like I said,” she said. “I never had a coach that was as supportive like he was. It was awesome to have that and someone to help me with recruiting. He has been great this year.”

“My softball career has been awesome,” Dean said. “I have been starting varsity since my freshman year, so I have had a really good experience. We have had a good team almost every year, and it has just been amazing and something I will never forget.”

Dean and the rest of the seniors got to play on a new field this year and Dean said that was fun, but also missed playing on the old field, where she shined for the past three years.

“It was awesome, but it was also kind of sad because I played on the other field since my freshman year,” Dean said. “It was kind of weird changing, but it is a nice complex. I am excited for the underclassman that get to have that for the rest of their high school.”

Ostergard said Dean will be missed next year because she was a leader on the team and meant a lot to the development of the other players.

“Brylee is a very special ball player. She’s always been a gifted and talented player; things always came natural to her,” Ostergard said. “She has a fantastic work ethic and wants to always develop her game and grow as a player both physically and mentally. She carried herself in such a classy and positive way, which made the girls around her want to get better. Didn’t matter if she went 0-4 or 4-4, or whether I asked her to play centerfield, third, or pitch; she made sure to always put the team’s best interest first and that’s why we were able to have the success we did this year. She’s a role model for these upcoming players, and she really helped lay the foundation to keep this program moving forward.”

It is that team-comes-first mentality that Ostergard said will carry her far at McCook and beyond.

“I believe she will adjust very well to the competition at the next level,” he said. “McCook is a quality program and I know they will help her grow as a player. I believe she will make a positive impact from the day she steps foot on campus. Region IX is no walk in the park, but there’s no doubt Brylee is ready for that next step, and I’m excited to see her play the game she loves at the next level.”

Ostergard added it has been a privilege being her coach.

“The best thing about Brylee is that she is not only a fantastic player, but she’s an even better person,” she said. “The most rewarding part of coaching isn’t about the wins and losses, but about seeing your athletes grow into young adults and preparing them for their future, and Brylee is more than ready for that next step. It’s been such a pleasure being her coach.”

Dean has had a stellar high school softball career, and she has always loved softball, thanks in part to her sister Delaney, who also played softball and played four years for Gering, graduating in 2018.

“I am just focusing on softball and getting stronger and getting ready for college,” she said.

At McCook, Dean said that she will be an outfielder but was recruited because of her hitting.

The McCook program finished 38-14 a year ago and plays in Region IX.

“Last year they were 38-14 and they did really well,” she said. “They are a good school. They are a competitive junior college. I think it will be really good for me.”

Her goal at McCook is to take core classes to achieve her major and move onto a four-year school to finish playing and achieving her degree. Dean wants to be a sonographer.

First, however, she has one more semester at Gering, and it will be a time for her to cherish being a Bulldog for the final time. She said it will be hard not putting on the Blue and Gold anymore, but she is ready to move on.

“It will be crazy and will be bittersweet for sure,” Dean said. “It will be sad leaving here, but I think what I have in store for the future, I think it will be good.”

The Bulldogs down the Indians in a matchup in Gering on Thursday.

In their first home game of the semester, the Cougars downed the T-Birds on Monday.

A look back at the top sports stories of 2021 in Gering.

No. 10 WNCC runs by Central Wyoming

Cougar women get their 15th win of the season in their first game of the semester against the Rustlers.

Brylee Dean signs her letter of intent to play college softball at McCook Community College while her mom, Heather Elliott, and her dad, Darryl Dean, look on.