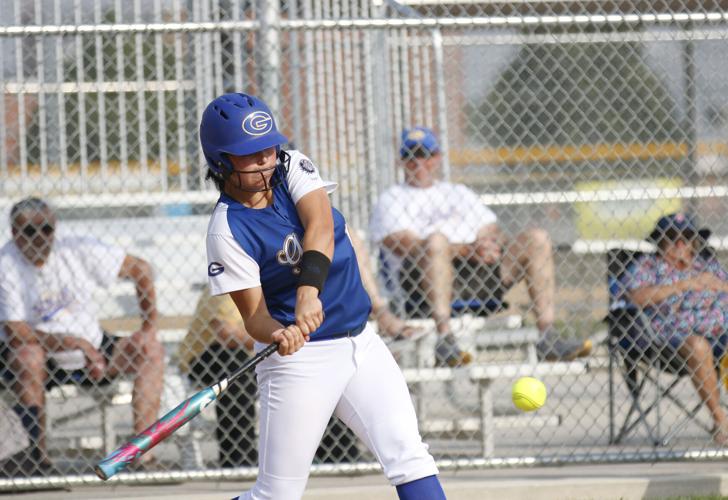 Gering’s Nickie Todd swings at a pitch in the Bulldogs win against Chase County. 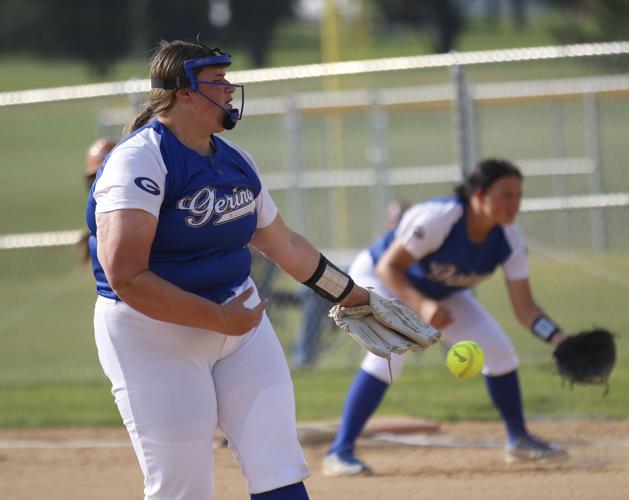 The Gering Bulldogs, Chase County Longhorns and Bayard Tigers played a softball triangular with Gering hosting the event on Tuesday.

The event kicked off with the Bulldogs playing the Longhorns, winning 12-0 in a game that ended by run rule after the third inning.

The Bulldogs started off scoring eight runs in the first inning, one in the second and three in the third.

“For this game, and the game against Bayard, we talked about focusing on the little things, having a good approach to the games, just finding something to take out of the game,” Gering coach Zach Ostergard said. “I thought the girls stayed in that approach, it kind of got away from them in the last inning against Chase County, but overall I thought we played well defensively and produced runs when we needed to.”

In the second inning of the game, winning pitcher Aspen Elsen hit a home run to continue the Bulldogs scoring run.

Like other teams around the area, Gering is cooling down from the Twin Cities Invite and hoping to hit the ground running after one of the premier area softball events.

“We faced some really good competition all week, and the girls played very well," Ostergard said. "So it was nice to get these games in, it was a bit of an adjustment seeing this type of pitching we’re seeing, but overall they did well and I hope they can carry it over to Thursday night."

The Bulldogs will travel across the river to play Scottsbluff next on Thursday, Sept. 15, Bayard will host the Chadron Cardinals in a doubleheader the same day, first at 4 p.m. and then 6 p.m.

The Gering golf team finished a season-low, which included some career-lows, in their home invite on Sept. 12.

The regular season concludes at HiWay 92 Raceway, setting up the Shootout on Sept. 17.

In an over two hour ball game, Douglas ruins Gering’s homecoming as the Bearcats capitalize on three Bulldog turnovers in the first half en route to a 45-24 win over the Bulldogs.

The Bulldogs football team opened the season with a big win at home over the Trailblazers on Friday.

The Cougars continue their win streak after downing Lamar on Saturday in the team's second home game.

On a hot windy day at Five Rocks Amphitheater, runners from Gering and Torrington took wins at the Gering Cross Country Invite.

The Bulldogs fell in the first road game of the season to the Cardinals on Sept. 3.

Gering’s Nickie Todd swings at a pitch in the Bulldogs win against Chase County.