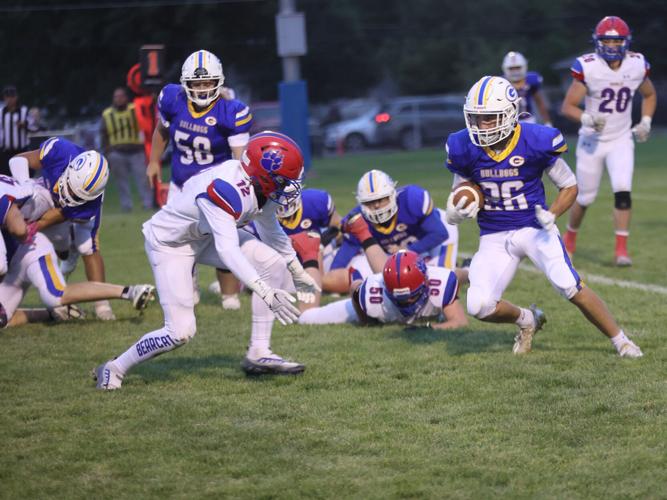 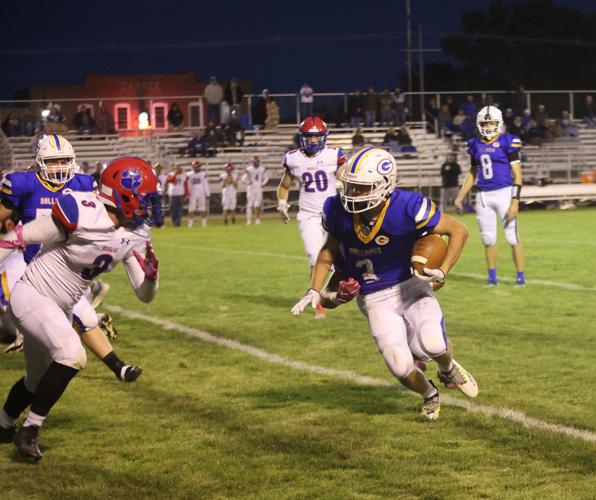 It was homecoming week for Gering and the Bulldogs and the Douglas Bearcats put on a high-scoring contest in which turnovers played a major part in the outcome as the Wyoming school hung on to down Gering 45-24 Friday, Sept. 9.

“It was something we talked about all week and that was winning the turnover battle and we didn’t do it,” Gering coach Danny O’Boyle said. “Especially in the first half where we had three turnovers and it led to points for them on all the possessions. You come back at the end of the game and look at those three turnovers as the difference as you lose by three touchdowns and missed on three extra opportunities. That is the difference. I think we had four turnovers in the game and we have to be better at that and I take responsibility for that because some of that is on my play calling so I got to look in the mirror, too.”

The first half was high scoring as Douglas led 38-10 and the second half was an even contest as Gering held the Bearcats without points in the third quarter and won the second-half battle.

O’Boyle said they did play better in the second half.

“We did play better in the second half. We went into the locker room at halftime and we talked about that, we have to learn from the first half and we can’t change it right now. We have to win the second half to give ourselves a chance. We did that. We came out and had two really good drives in the third quarter and got two touchdowns. We had it down to a two-possession game and they just miss executed and gave up a big touchdown. We just couldn’t claw our way all the way back.”

Douglas needed just three plays to open the game to score first as the Bearcats opening play was a 77-yard completion to Brock Pyle and moments later, Pyle caught a 5-yard touchdown for the 7-0 lead with a minute gone in the game.

Gering was moving the ball on their first possession including a 48-pass play from Jackson Howard to Tanner Gartner, but two plays later, Gering fumbled, stopping the drive.

Douglas went eight plays before the Bulldogs stopped them and forced a field goal. Douglas’ Jackson Hughes booted a 34-yard field goal to go up 10-0.

Gering’s next possession saw the Bearcats’ Trey Rinns intercept Howard and it took Douglas just two plays after that to score as Hughes went 34 yards to paydirt and the 17-0 lead.

Gering came back and put together an 8-play drive and made it 17-3 as Ethan Prokop booted a 27-yard field goal.

Douglas then took the kickoff return and returned it to the 43 and the Bearcats made it 24-7 in just three plays as Luke Skeen caught a 10-yard touchdown pass.

Gering answered as the Bulldogs needed just seven plays to hit paydirt themselves as Gartner was the workhorse with five rushes, including one rush where he jumped over a defender that was on the ground for an 8-yard gain and capped the drive off with a 36-run to make it 24-10.

Douglas kept going as they went down and scored another touchdown on their next possession as Karson Ewing went three yards for the 31-10 lead.

Gering kept moving the ball and had a big completion from Howard to Gartner that was aided by a roughing-the-passer call. The next possession Rinns got his second interception and in just four plays, Rinns ran the ball in from 18 yards out for the 38-10 halftime lead.

The Bulldogs were a different team in the second half as they came out of the locker room and mounted an 11-play drive that saw Gartner the workhouse once again as the junior ran the ball in from the one-yard line 38-17 with 6:52 to play in the third.

Gering held Douglas on three plays, but on fourth down and backed up to their goal line, the Bearcats went for it on a fake punt and were successful. Four plays later Gartner picked off a Douglas Bearcat pass.

Gering made the most of that interception as they needed six plays to make it a game as Gartner ran the ball in from six yards out to make it 38-24 with a little over two minutes to play in the third.

Douglas’ next possession saw the Bearcats move the ball and had to settle for a field goal, but the 27-yard attempt was wide and Gering had the ball once again. But this time, the Bulldogs had to punt, which was the first punt of the contest. After the punt, Douglas had a big play as on the third play Pyle took off down the sideline and 70 yards later was in the end zone for the 45-24 lead with six minutes to play.

Neither team scored after that.

Gering will be back in action on Friday, Sept. 16 when they host Ogallala.

The Gering golf team finished a season-low, which included some career-lows, in their home invite on Sept. 12.

The regular season concludes at HiWay 92 Raceway, setting up the Shootout on Sept. 17.

The Bulldogs football team opened the season with a big win at home over the Trailblazers on Friday.

The Cougars continue their win streak after downing Lamar on Saturday in the team's second home game.

On a hot windy day at Five Rocks Amphitheater, runners from Gering and Torrington took wins at the Gering Cross Country Invite.

The Bulldogs fell in the first road game of the season to the Cardinals on Sept. 3.

The Gering Bulldogs, Bayard Tigers, and Chase County Longhorns all participated in softball triangular in Gering on Tuesday.