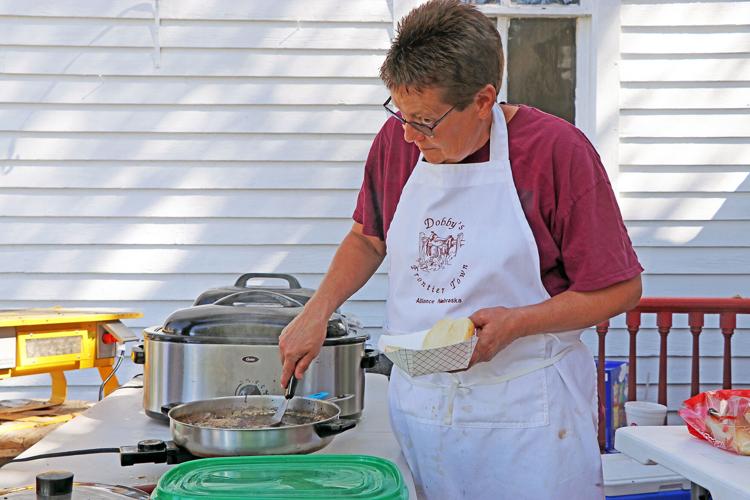 Dobby's Frontier Volunteer Laurie Keilwitz cooked up 35 pounds of hamburger or over 600 Rex's Hamburgers and 60 hot dogs during Dobby's Fall Festival with the help of her daughter, Hemingford Elementary School PE Teacher, Morgan Kuhn. Keilwitz said it was fun to hear all of the stories of Rex's, a popular little hamburger shop in Alliance in the 1950s. 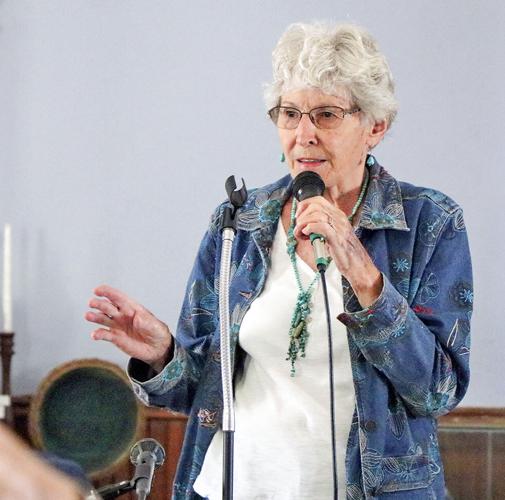 Lyn Messersmith tells the history of a few of the not-so-well-behaved women of our history. 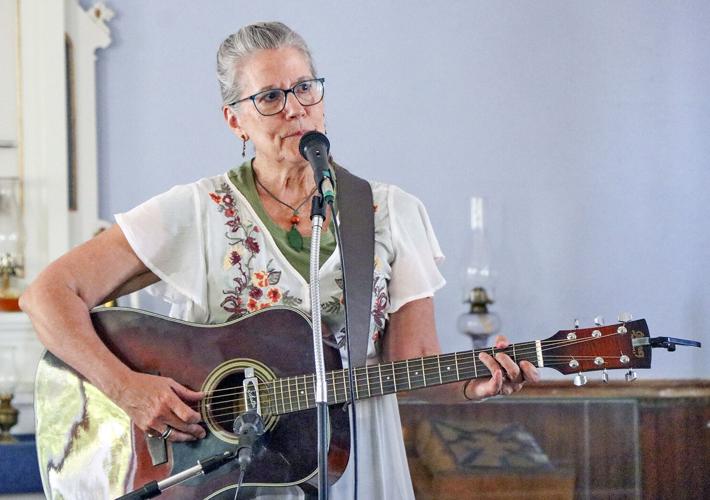 Deb Carpenter-Nolting sings songs and strums her guitar as she told tales of Annie Oakley and Mari Sandoz. 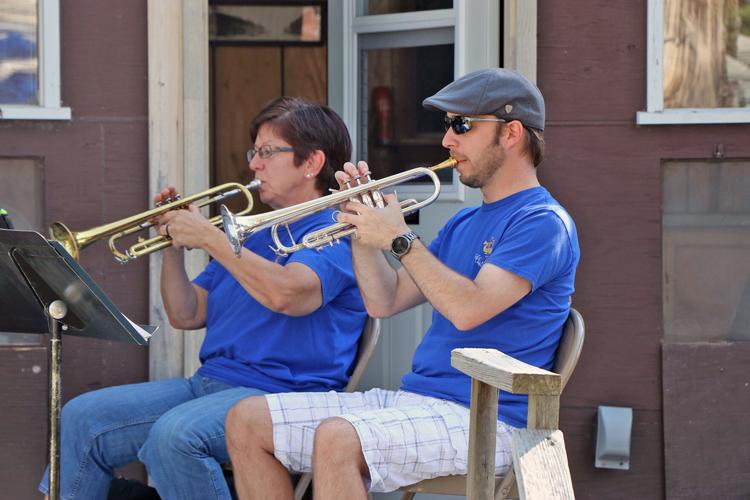 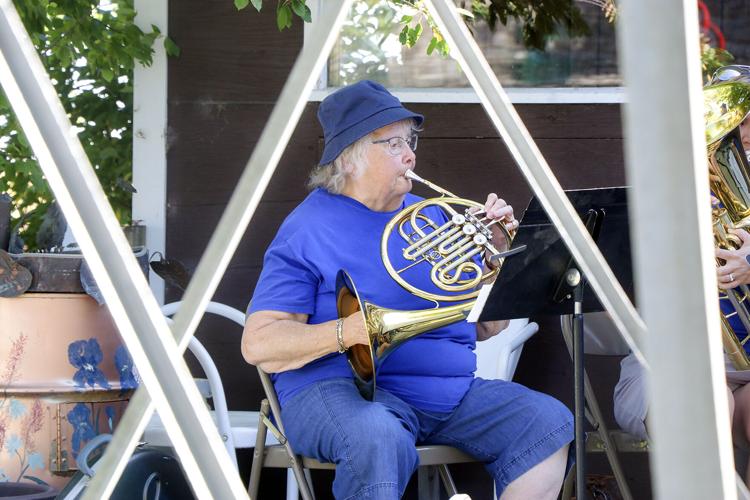 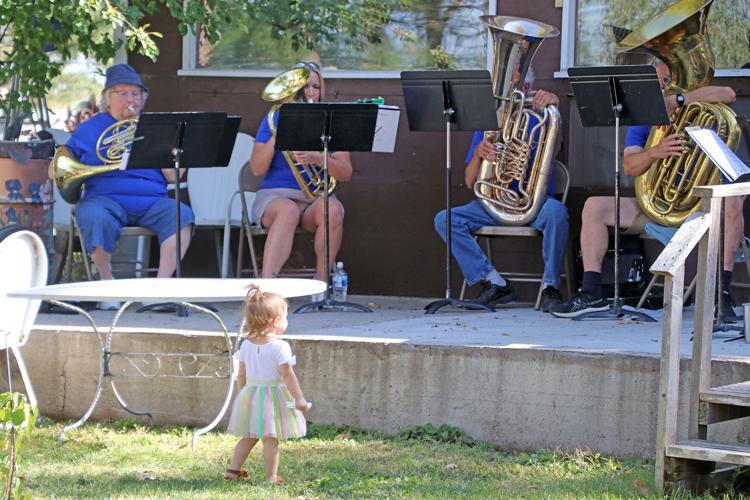 With much excitement, a young girl watches the St. John's Brass play.

Dobby’s Frontier Town was a busy little town this weekend during the 32nd annual Fall Festival. The grounds and all 27 buildings were cleaned up and ready to give visitors a chance to experience history.

Countless tiny Rex’s Hamburgers, made at 18 burgers per pound just like back in 1950, were served up, live music was performed, old time photos were taken by Steph Mantooth at Josiephine’s Photo Parlor, and shots of sarsaparilla was served up at the Lone Duck Saloon.

“It was a wonderful weekend, said Dobby’s Frontier Town Board President Lori White. “It was honestly our most laid back and financially productive fundraiser that we’ve ever had. I’m so happy! The bills are paid for the winter and we have a fresh start for the spring.”

White thanked all who attended to support Dobby’s.

Dobby’s will entertain over 100 Alliance 4th graders on Friday for Pioneer Days.

During Dobby’s Fall Festival, Lyn Messersmith and Deb Carpenter-Nolting with Humanities Nebraska offered stories, songs, and poems about women who left footprints on history by stepping out of place. The ladies spoke of just a few of the not-so-well-behaved women of our history.

“I’m going to talk to you about some working girls,” said Messersmith, a third-generation Cherry County rancher.

“A hometown gal Tad Lucas from Cody, Neb. was a trick rider and the only person inducted into all three Cowboy Halls of Fame,” she said. “She was quite famous in her day.”

A tiny lady bronc rider from the Nebraska Sandhill country, Tad Lucas was the youngest of 24 children born to a pioneer family in 1902. She rode bulls in the main streets of Cody during World War I to raise money for the Red Cross. Trick riding was a contest event in the 1920s and Lucas won the event at the Cheyenne Frontier Days eight consecutive times.

“I’ve always been fascinated with Tad and love sharing her stories,” said Messersmith. “I remember hearing that name once when I was growing up then after I was grown I began to hear more of her stories.”

She spoke of “Baby Doe” Tabor who was born Elizabeth McCourt in Oshkosh, Wis. in 1885. As a child she was known as a tomboy but was very beautiful.

“She entered and won a figure skating contest,” she said. “That was something that was not proper for a young lady to do at that time. It was very much a man’s sport. She got a lot of attention and not a lot of it positive. She caught the eye of Harvey Doe. They moved to Central City, Colo. so he could work the silver mine (that his father had given him as a wedding gift). He wasn’t crazy about working in the mine so his wife put on miners clothes, picked up a shovel, and went to work.”

Doing so attracted negative attention from the ladies of the community but the miners liked it and nicknamed her “Baby Doe”. She divorced Harvey after growing tired of making a living for both of them.

“She decided she would just make a living for herself,” she said.

She moved to Leadville, Colo.: the second largest city in Colorado in 1880. She met Horace Tabor who was a very wealthy but married miner and businessman. At the age of 25, Baby Doe married the 49 year old Horace. The two lived a very happy life spending the fortune that Horace made. During the silver panic of 1893, however, Tabor’s financial empire collapsed; Horace soon died and she became a penniless widow. She grieved for the remainder of her life, and in 1935 friends found her frozen to death, her feet wrapped in rags, in a shed at the Matchless Mine in which she lived alone.

“That was her life,” said Messersmith.

Carpenter-Nolting, from Bushnell, is a retired teacher who taught at many Nebraska schools from elementary to high school along with Western Nebraska Community College and Chadron State College. She is listed in Who’s Who Among American Teachers and was awarded Instructor of the Year at Oglala Lakota College.

She told a story and sang a song about Nebraska’s own Mari Sandoz; an author that went against the norm of romanticizing the West by writing the realities of the hardships. She was born in Hay Springs in 1896 and became one of the West’s foremost writers.

“Back then, people wrote about how beautiful the West but she wrote about the realities of life and told things like they were,” said Carpenter-Nolting. “She always wanted to be a writer; when she was just 12 years old she had a short story published in the Omaha Bee which is now the Omaha World Herald. Her dad, Old Jules was not very fond of that… he always discouraged her from writing and often instilled harsh punishments for it.”

“When she was a teenager, she snuck off to Rushville to take the teacher exam and he wasn’t really happy with that either until she started bringing home money,” she said. “She enjoyed teaching but it wasn’t as much of a passion as writing and one day when she was teaching at Bridgeport the kids came to school to a note tacked on the door that said, sorry, teacher is gone.”

Sandoz went on to publish many non-fiction and fiction books including Old Jules.

Questions from the audience included: why is sharing stories of these women important to you?

“For me, who we are has a lot to do with where we grew up, the traditions, the culture and the people that came before us,” said Messersmith. “It brings history to life as a real thing and not just dates and information that you learn in school. I hated history class when I was a kid because it wasn’t about the people. History is about the people and how it affects who we are and where we are today.”

“For me, it’s about helping women find their voices,” said Carpenter-Nolting. “When you look at Mari who was look down on for telling the truth about her family and community we struggle with that. Women in this area especially have conservative backgrounds and were taught to be good little wives and mothers so not everybody had their own voice… It’s important to give these women that voice and to encourage other women to have a voice.”

The family unit plays a crucial role in shaping a child’s life. A loving home is a tremendous blessing – it’s easy for many of us to take that…

Getting Ahead: Medicare Part D Changes

Hemingford's Believe in Hope for the Holiday event a success

Remember when getting home and everyone being together for the holidays. We many times were lucky enough to travel to Iowa City, Iowa. Where m…

Public safety has rightfully been on the minds of Americans across the country. Violent crime rates remain high. So far this year, nearly 300 …

Birthdays for the upcoming week beginning with December 8

Dobby's Frontier Volunteer Laurie Keilwitz cooked up 35 pounds of hamburger or over 600 Rex's Hamburgers and 60 hot dogs during Dobby's Fall Festival with the help of her daughter, Hemingford Elementary School PE Teacher, Morgan Kuhn. Keilwitz said it was fun to hear all of the stories of Rex's, a popular little hamburger shop in Alliance in the 1950s.

Lyn Messersmith tells the history of a few of the not-so-well-behaved women of our history.

Deb Carpenter-Nolting sings songs and strums her guitar as she told tales of Annie Oakley and Mari Sandoz.

With much excitement, a young girl watches the St. John's Brass play.