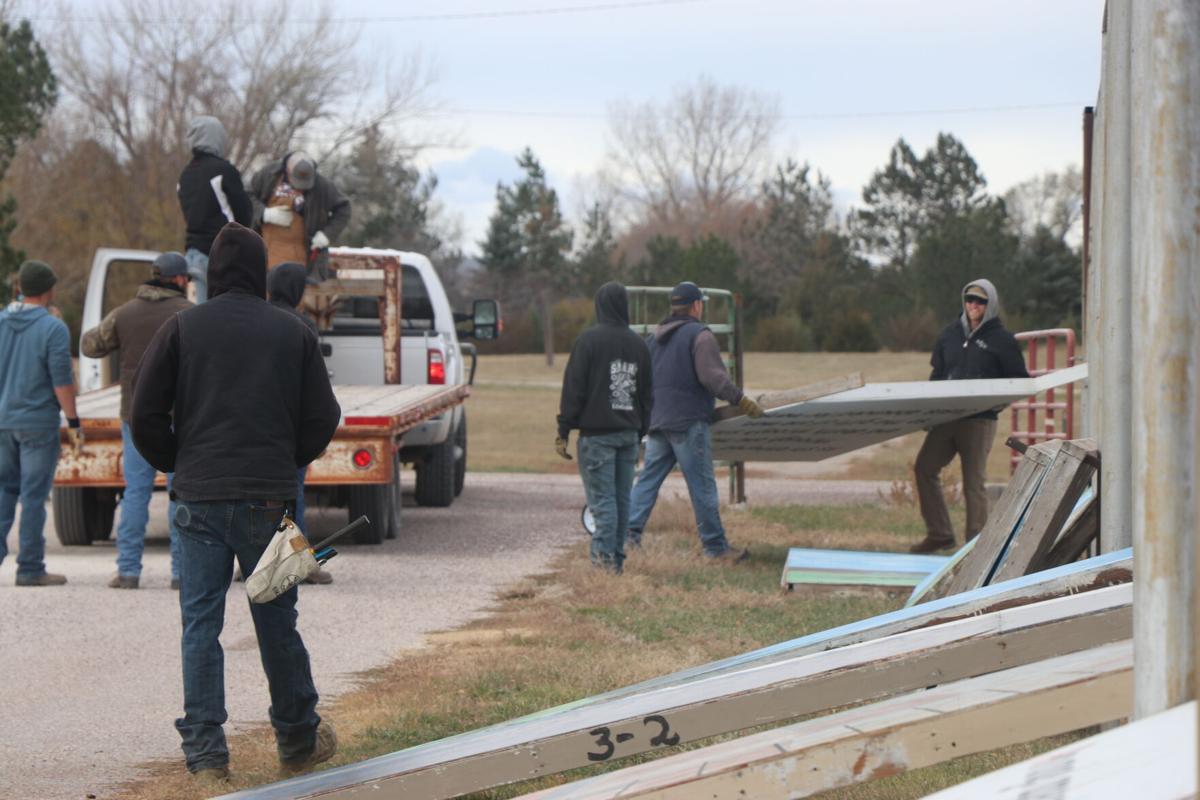 WNCC Powerline Construction and Maintenance Technology Students worked to unload pieces of the Christmas Diorama with instruction from Dave Minich and Chelsie Herian. 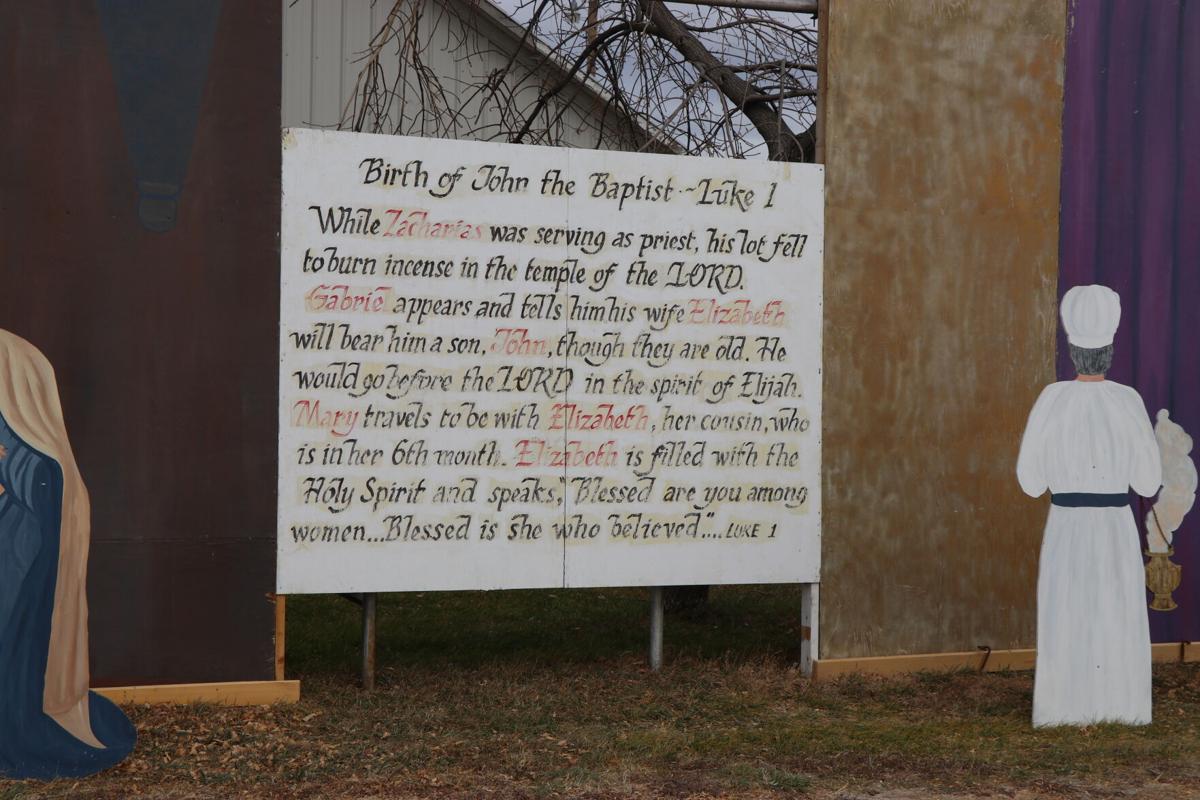 The Christmas Diorama panel shown is just one of a few that could use some TLC. The Diorama is in need of some touch ups and volunteers are needed.

The Hemingford Christmas Diorama has been put up for the 66th season. Although it’s not quite finished yet as the sign at the entrance is being rebuilt by the Hemingford Shop Class because it was damaged last season by the wind and some of the figures and lights aren’t all in place it’s still a spectacular sight to see.

Stage one of the Christmas Diorama was put up on Wednesday, November 10 by the WNCC Powerline Construction and Maintenance Technology Students. Dave Minich directed the volunteers with help from Chelsie Herian and a trailer provided by MCT Trucking. Transportation for the WNCC Students was provided by Hemingford Public Schools staff Sandy Haas-Transportation Director and Bus Driver-Jake Frost. Lunch for the volunteers was provided by the Hemingford Chamber of Commerce.

The life-sized display depicting Biblical scenes, spanning from creation to the resurrection of Christ, was the vision of the late Rev. William James Hoare. In 1955 he was inspired “to put Christ back in Christmas” as well as to draw citizens from all faiths to “work together in doing the job.”

An article from the Dec. 9, 1962 World-Herald Magazine, written by James Denney, quotes then co-chairman George Bacon as saying of Hoare, “He felt there was too much commercialism of Christmas. So he started the diorama to tell the true Christmas story. He begged paint and materials and started out. The first year we had just three or four scenes on Box Butte Ave.  The display has grown so much every year that we finally had to move it.”

The original display that Bacon spoke of was made of sisalcraft paper and the panels were approximately 12 feet high. In 1957, as the display expanded and scenes were added, it was moved to the west edge of town, delighting passers-by on Hwy. 2. Rev. Hoare, who passed away in 1956, never got a chance to see his vision after it was moved.

Many others did though. The Nebraska Department of Roads lent use of a car counter in 1957, which calculated 1700 visitors; almost twice the population of Hemingford.

In 1962 it was redone on a more permanent product – plywood. Today the Diorama stretches 216 yards (over two football fields) and the plywood panels that the scenes are painted on are 10 feet high.

Both of Rev. Hoare’s wishes have come true and remained true, as the diorama’s survival over the years, has been dependent on the volunteer work of many and has brought many together for a common cause.

Bacon co-chaired the diorama project with Clyde Lawson in the early years. The aforementioned article also credits the talents of many others including: Charles Anderson, Darien Anderson, Mary Lliteras and Dorothy Minich.

There have been times over the years, when the fate of the diorama was in jeopardy. But, inevitably someone steps up to the plate and the tradition continues. It is impossible to name all of those who have helped through the years, without leaving someone out.

As you drive through the Christmas Diorama display this Holiday Season there’s no doubt that you will enjoy it but please take note of how time and weather have once again taken a toll on the 65 year old display.

“A lot of people talk about how it’s important but how much does it matter?” said Randolph. “Does it matter enough to come help put stuff up and take it down or help touch up paint? We have a lot of issues that need to be addressed are storage and restoration.”

“If some church groups want to help just write over the letters that would be a big help,” said Chamber Member Chelsie Herian.

Art classes, church groups and individuals have volunteered their time over the years to cut out new figures or touch up the panels. This is once again needed. Consider volunteering your efforts. Please reach out to Hemingford Chamber of Commerce heads Blanche Randolph or Marcie Thomas if you are interested.

Principal among resignations accepted by school board

The Hemingford School Board accepted the resignation of High School/Junior High Principal Daniel Kluver Sr. during the November meeting.

Once Upon a Time…A Bakkehaug Wedding

It's happily ever after for Mr. Kevin Donovan Bakkehaug and Mrs. Alyson Campbell Bakkehaug!

‘Believe in Hemingford’ set for Dec. 1

The Village of Hemingford is hosting the 5th Annual Believe in Hemingford to kick off the Holiday Season. All are invited to attend the festiv…

Titles awarded in 2022 Best of the West Competition

ALLIANCE — Twelve young ladies from across the state gathered on Saturday night to compete in the Best of the West Competition in Alliance. Wa…

WNCC Powerline Construction and Maintenance Technology Students worked to unload pieces of the Christmas Diorama with instruction from Dave Minich and Chelsie Herian.

The Christmas Diorama panel shown is just one of a few that could use some TLC. The Diorama is in need of some touch ups and volunteers are needed.