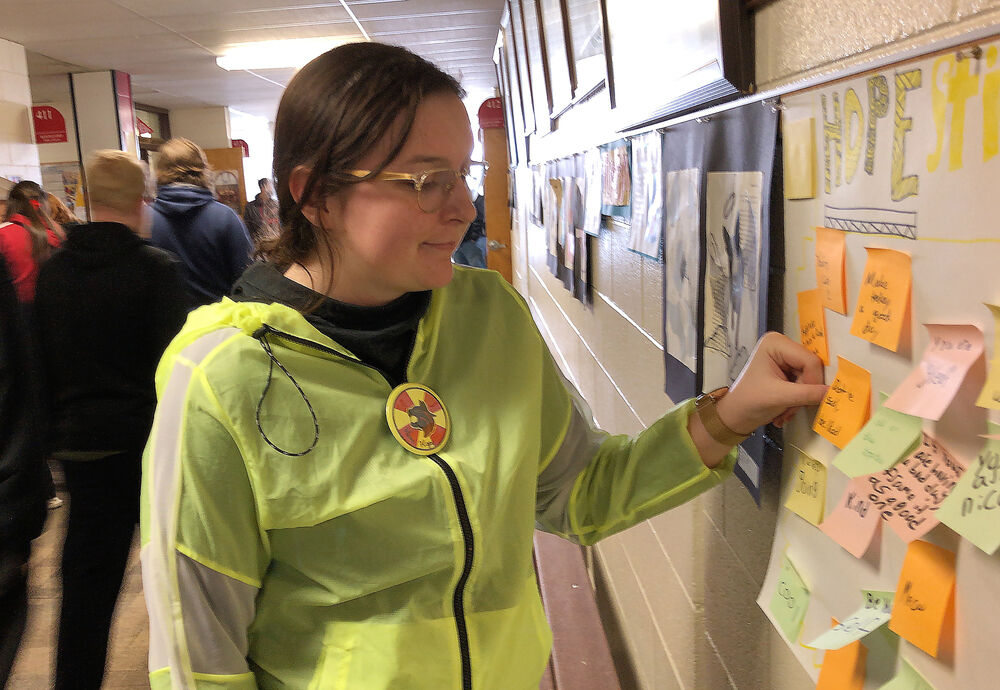 FCCLA president Emma Gomez places a positive sticky note on one of the many posters the group put up around the school for FCCLA Week. Students could place positive messages on the boards or take one of the messages as encouragement. 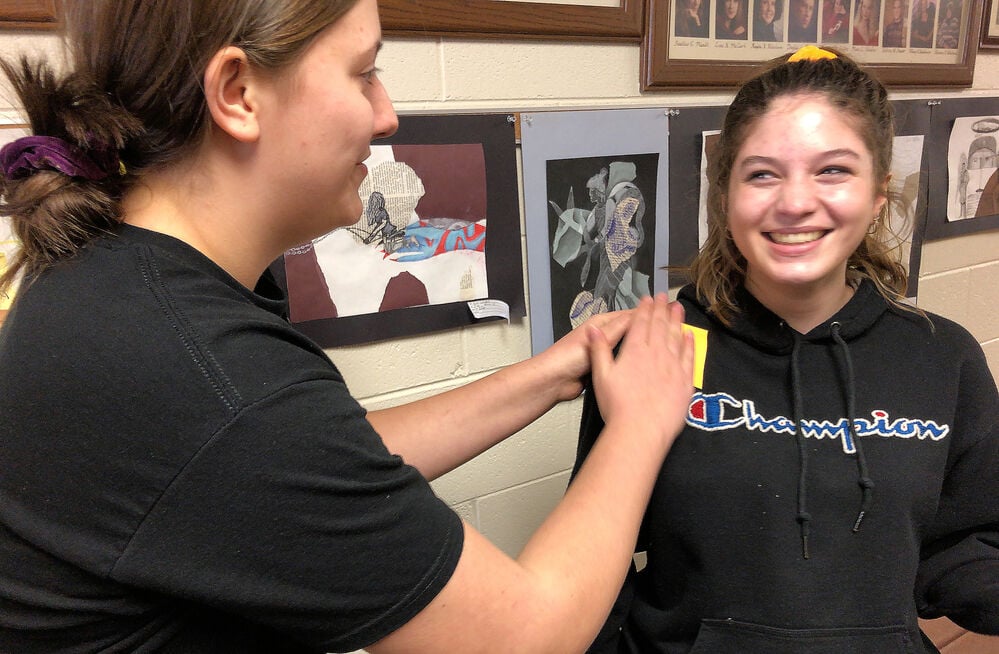 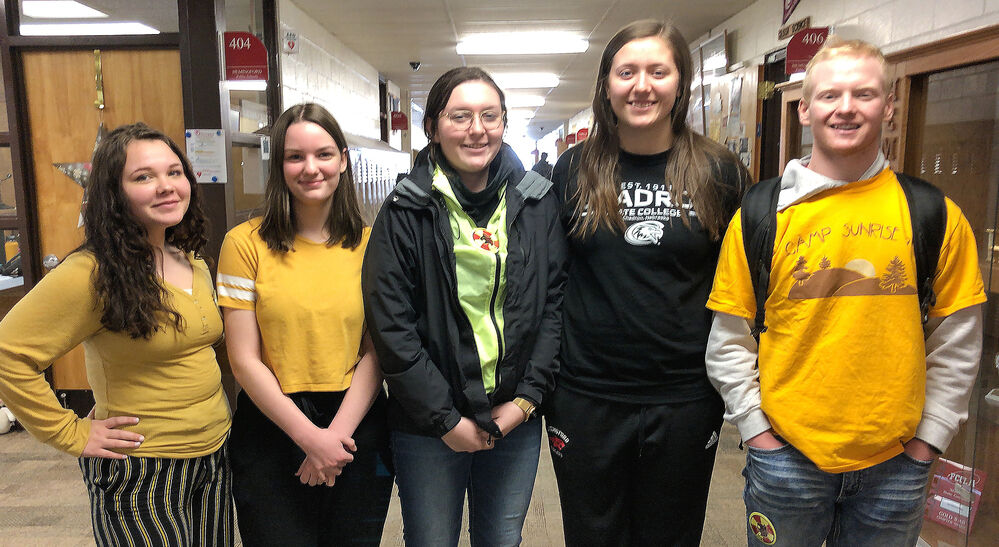 When Emma Gomez was in second grade she was involved in Hemingford school’s FCCLA Big Brother/Big Sister program.

“I always idolized the big brothers and big sisters, they were so cool,” Gomez said.

As a senior and president of this year’s Hemingford’s FCCLA, she is now the big sister.

“It was amazing,” she said of the experience.

There are 25 members in grades 7th-12th in FCCLA at Hemingford schools, according to adviser Suzanne Neefe.

“There are more than 3,000 members in FCCLA in Nebraska,” sophomore Rylie Right said. Right is the group’s public relations officer.

FCCLA offers students a connection to careers in hospitality and tourism, visual arts and design, education and training, and human services. It is a career and technical student organization that works as an important part of the Family and Consumer Science education curriculum.

Since FCCLA’s founding in 1945, members have been in schools throughout the country giving students opportunities to get involved in their communities and develop real world skills.

On Monday, the group held a spaghetti feed. On Tuesday, they made smoothies and cookies for students in the morning. On Wednesday, they wore red or their FCCLA shirts. On Thursday, they teamed up with the Hope Squad and wore yellow for the Day of Hope. There was no school Friday.

The group also put up positive posters around the school and placed sticky notes with positive messages on the posters and on bathroom mirrors.

“Students could leave a note or take one,” junior Sarina Radspinner said. Radspinner is the group’s secretary.

Throughout the year the group meets regularly, mentors the second graders, and competes in a number of different competitions in many different categories.

“There are a crazy amount of categories of divisions,” Right said.

“My freshman year I competed at Nationals,” in sports nutrition, senior Alex Neefe said. He has been involved in FCCLA for six years. “I traveled to Atlanta to compete at Nationals.”

Gomez earned a trip to Nationals last year in Chapter in Review Display, however, with the pandemic, Nationals were virtual.

Through FCCLA, Gomez has been able to take part in a statewide job shadowing program called Day in Your Future. The program matched her up with a special education teacher in Alliance. It is the field Gomez is interested in going into.

“It was a great experience,” she said. “I got a lot of great, amazing advice.”

She combined the experience with the STAR, Students Taking Action with Recognition.

There are 12 different FCCLA districts in Nebraska, “we are in District 12,” Right said. “There are four regions, we are in Region D.”

Members compete first on the district level then go to state. The top two in each level in the different categories move on to state. You have to get above silver on a point system that ranges from bronze, silver and gold.

All the competitions, district, region and state meetings, including Nationals, which will be June 27-July 2, are being held virtually.

“I don’t like virtual as much as traveling,” Radspinner said. “I would rather be in person, but I’m glad we get to compete.”

One of the pluses of being in FCCLA is meeting new people, she said. You meet new people at the local school meetings, on the district and state level and beyond.

At the group’s local meetings, “We do something fun every meeting,” Gomez said. “We did spaghetti meeting and a movie night.”

The group does different activities throughout the community, at the school and works with their little brothers and sisters.

Gomez, who remembers the positive impact her big sister had on her, is glad she can now be that big sister.

“As the big sis,” she said, “I love it. I love having that impact on the littles.”

A family affair at Barb’s Blossoms

For more than 30 years, Barb’s Blossoms has been a family business in Hemingford.

After 23 years working on and running a bison ranch north of Hyannis, Johnny Covey opted for a change and took a job with the Burlington North…

While other municipalities in the region and across the Midwest experienced rolling blackouts during the most recent cold snap, Hemingford was…

Raben's Market doing what they can to keep market stocked

Billie Miller used to tell her daughter that it’s OK to cry a little when things don’t go your way, but then you pick yourself up by the boot …

The Box Butte County Board of Commissioners was made aware of improper disposal of hazardous materials in the District 12 Probation office. Sp…

ALLIANCE — Story Time resumes in March on Tuesdays at 10 a.m. and Thursdays at 1 p.m. for children ages 3-6 years at the Alliance Public Library.

Weather over the past few weeks hasn’t been ideal for swimming conditions. But that hasn’t stopped the village board from discussing a Splash …

FCCLA president Emma Gomez places a positive sticky note on one of the many posters the group put up around the school for FCCLA Week. Students could place positive messages on the boards or take one of the messages as encouragement.