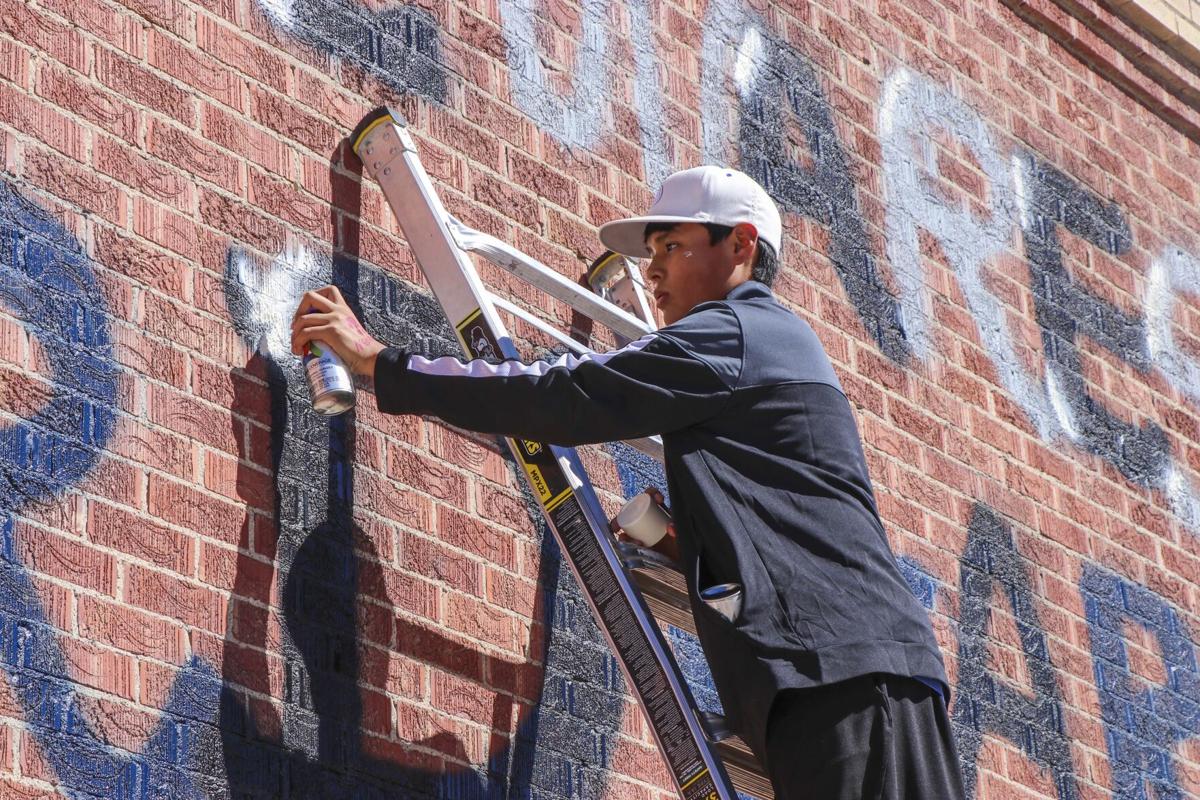 Hemingford Art Student Anthony Savala adds dimension to the lettering on the side of Valor General Store. 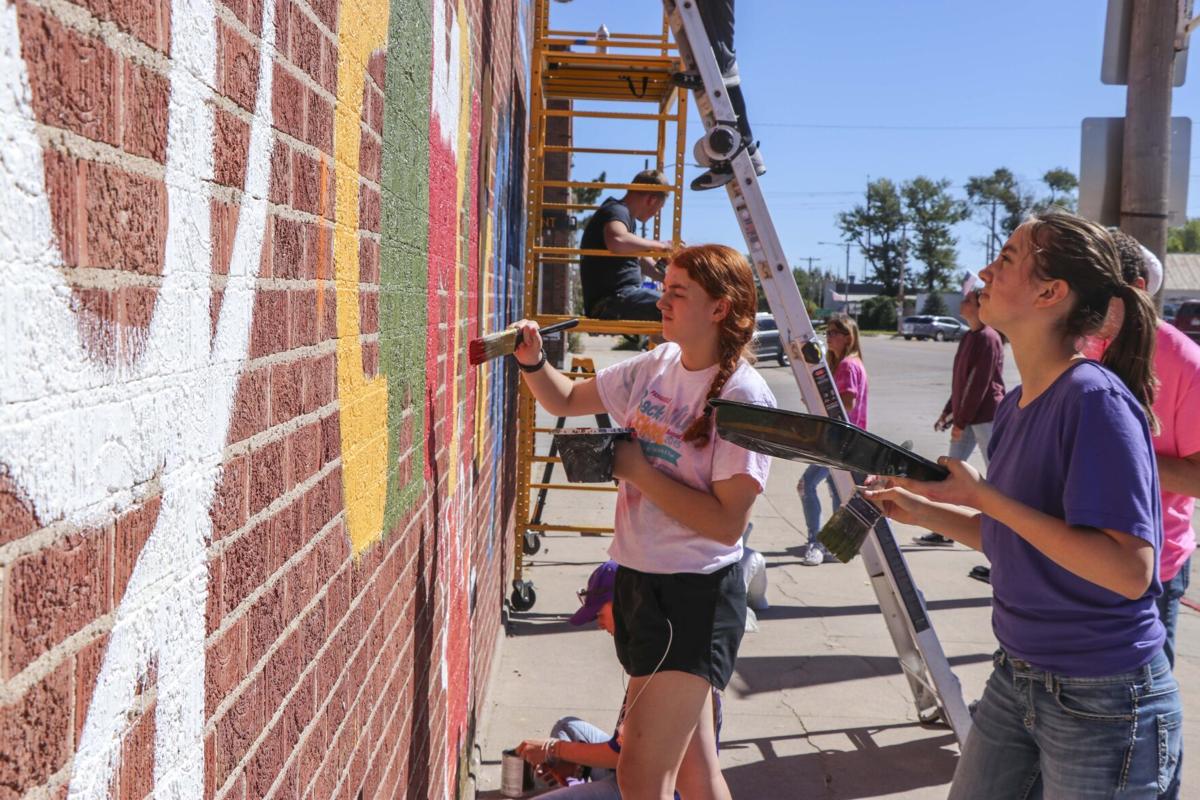 Mikayla Kumpf gets ready to dab some red on the “P” in the word CAMPING while RamonaLee Ramos takes a step back to check for missing spots. Other members of the Hemingford Art Class are seen behind. 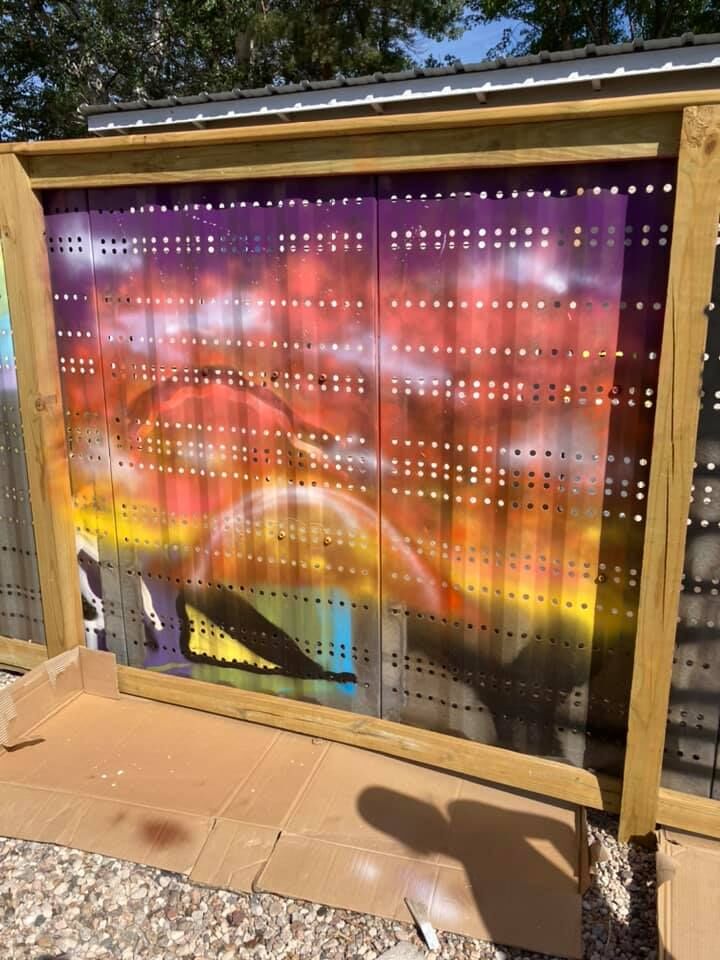 The fence behind LOCAL was painted by Hemingford Art Students. 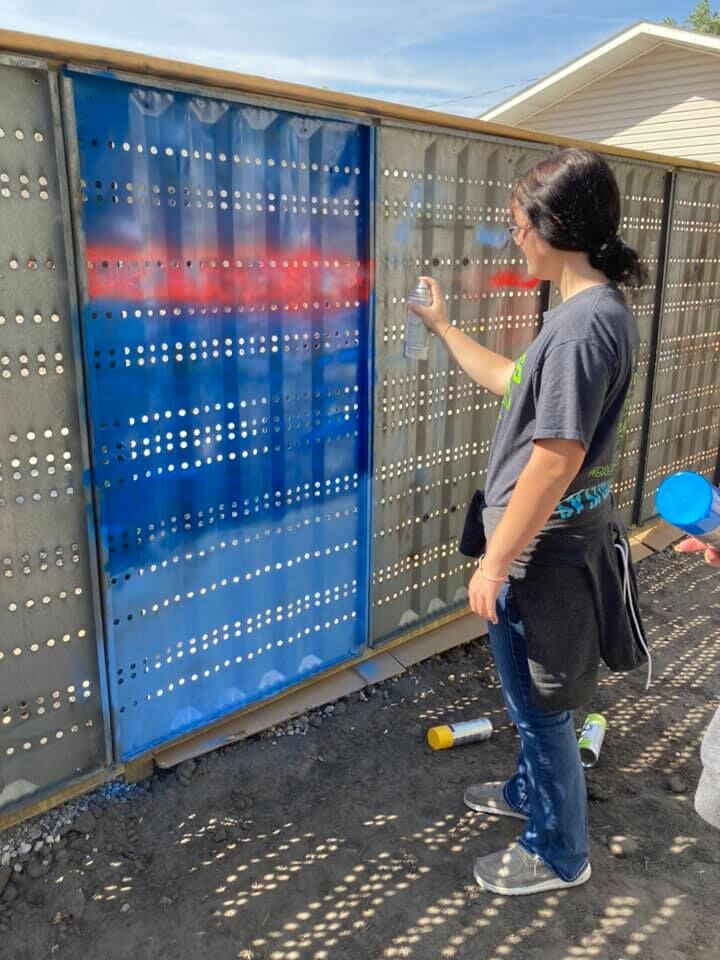 The Hemingford Art Students have been busy over the past few weeks painting artwork in Hemingford.

Johnna Wood, owner of Local asked if some of the Hemingford art students would like to do some street art on the fence behind Local.

“We ended last year studying Banksy, a street artist from the UK, and then we started off this year studying Takashi Murakami and some of his work was street art,” said Hemingford Art Teacher Millicent Butler.

“Then out of the blue Lacy said that she had an idea and wondered if some of the art students would come down and paint on their wall,” Butler said. “It just meshed perfectly with what I had finished teaching last year and started this year with. In our sketchbooks we had practiced the 3D shading so they were able to take that a step further and do an actual practical application on a wall! How many kids get to do that? Then they got to choose whether they wanted to spray paint it on or actually hand paint it.”

Valor owners Jonny and Lacy Covey were looking at different ways of advertising and came across “ghost signs”.

A ghost sign is an old hand-painted advertising sign that have started to fade from the side of the building they were painted on. Some of these signs have been preserved or have been recreated such as the Rhodes sign in Alliance that was recreated a few years ago. The sign may be kept or recreated for its nostalgic appeal.

Ghost signs are also called fading ads as in most cases these advertisements were painted on brick that has stood the test of time but the paint has faded. Old painted advertisements are occasionally discovered upon demolition of later-built adjoining structures.

Painters of these signs were called "wall dogs". As signage advertising formats changed, less durable signs appeared in the later 20th century, and ghost signs from that era are less common.

Many ghost signs from the 1890s to 1960s are still visible. Such signs were most commonly used in the decades before the Great Depression.

“Jonny and were thinking of ways that we could showcase some of the items that we have inside the store,” said Lacy Covey. “Our signs for Valor General Store are pretty non-descriptive so if you were just driving by the store then you might not know what we carry.”

“We gave them some guidelines and let them run with it,” said Lacy. “I keep telling people to give it a chance and let them finish the project before they judge it. It’s good for these kids to put their mark on the community, this is their hometown.”

“One thing that has been a bit of a struggle has been time,” said Lacy.

The art students only get one class period to work on it and by the time they walk down here they don’t have much time. Plus they’ve had some weather delays and now it’s turning cold

“It’s not done yet but we are proud of them and proud of how it is turning out,” she said.

Only so many students could be painting on the walls at one time so some of the students were able to do some community service inside Valor as well.

“We had some touch-up spots on the floor that needed painted where shelves had been moved,” Lacy said. “There were also some spots around the door and around the ceiling that we did not get painted before the grand opening. It has been such a big help; it was all hands on deck for 30 minutes while they were here and everyone wanted to do what they could. We really covered some ground both inside and on the wall outside.”

The art students have also been asked to repaint the drop box at the Hemingford Public Library. Stay tuned for photos of that and updated Valor mural photos.

Principal among resignations accepted by school board

The Hemingford School Board accepted the resignation of High School/Junior High Principal Daniel Kluver Sr. during the November meeting.

Once Upon a Time…A Bakkehaug Wedding

It's happily ever after for Mr. Kevin Donovan Bakkehaug and Mrs. Alyson Campbell Bakkehaug!

‘Believe in Hemingford’ set for Dec. 1

The Village of Hemingford is hosting the 5th Annual Believe in Hemingford to kick off the Holiday Season. All are invited to attend the festiv…

Titles awarded in 2022 Best of the West Competition

ALLIANCE — Twelve young ladies from across the state gathered on Saturday night to compete in the Best of the West Competition in Alliance. Wa…

The Hemingford Christmas Diorama has been put up for the 66th season. Although it’s not quite finished yet as the sign at the entrance is bein…

Hemingford Art Student Anthony Savala adds dimension to the lettering on the side of Valor General Store.

Mikayla Kumpf gets ready to dab some red on the “P” in the word CAMPING while RamonaLee Ramos takes a step back to check for missing spots. Other members of the Hemingford Art Class are seen behind.

The fence behind LOCAL was painted by Hemingford Art Students.