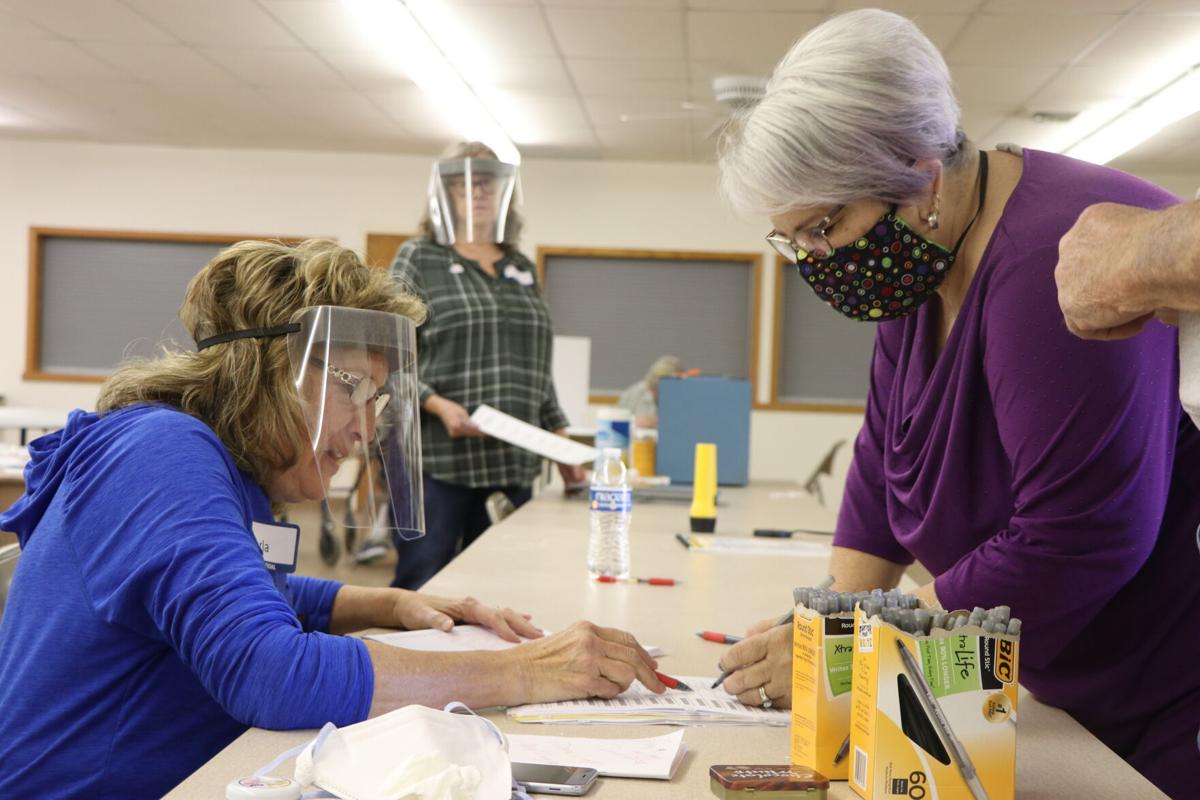 Hemingford Village Board Incumbent Lynda Novotny signs in to vote with the help of poll worker Marla Wade. Peggy Moser stands in the background with Novotny’s ballot in hand. Novotny said she was anxious for the results as she was one of the four running for three seats on the Village Board 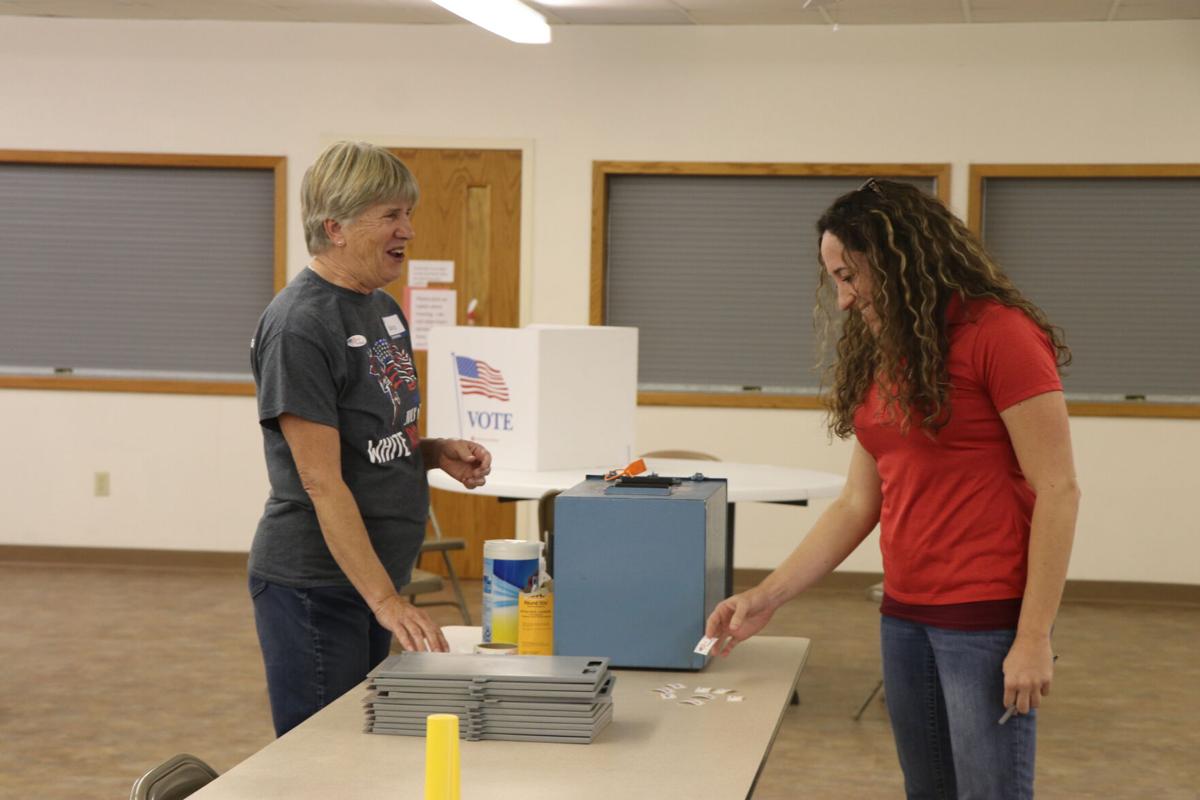 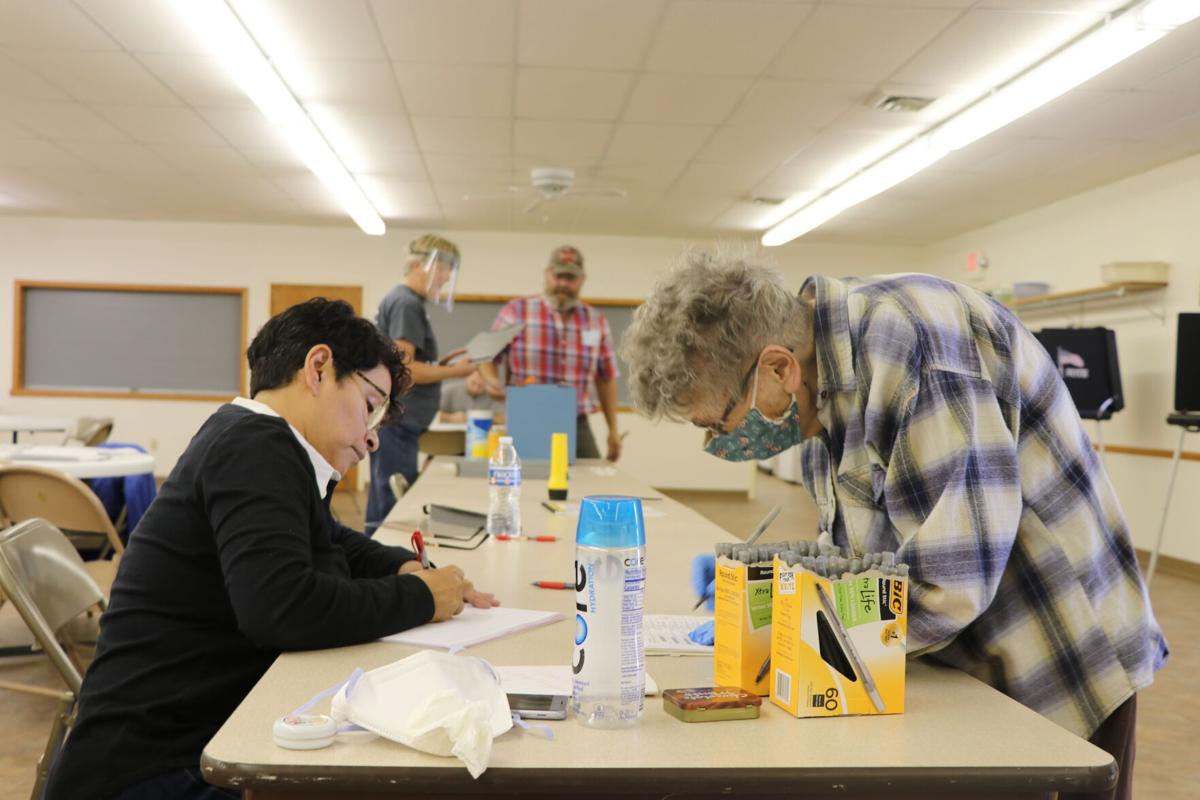 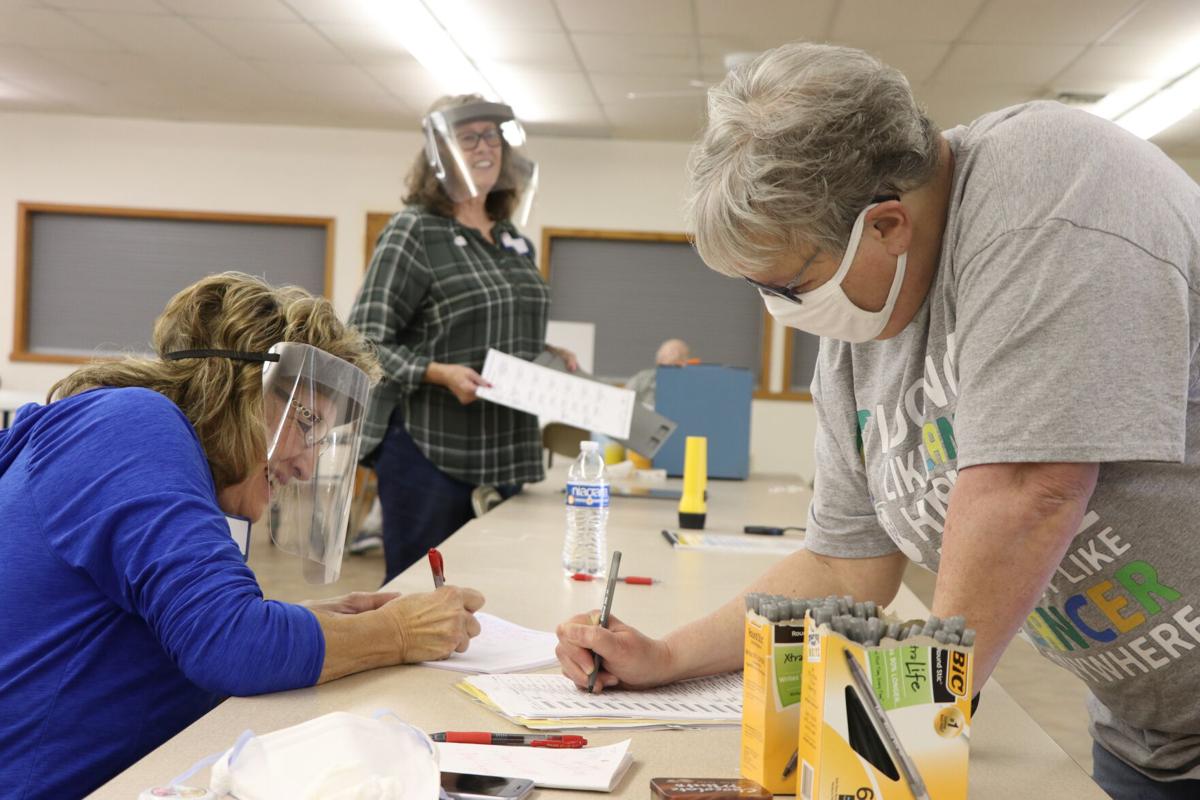 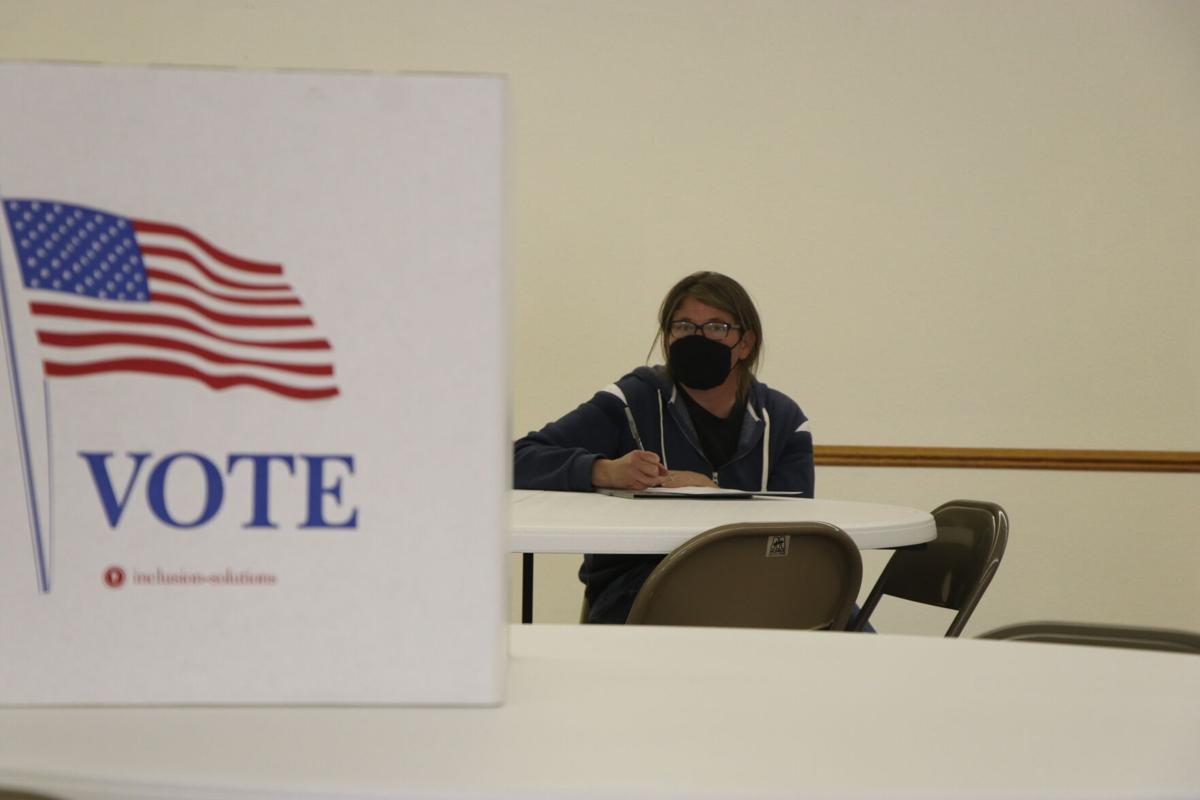 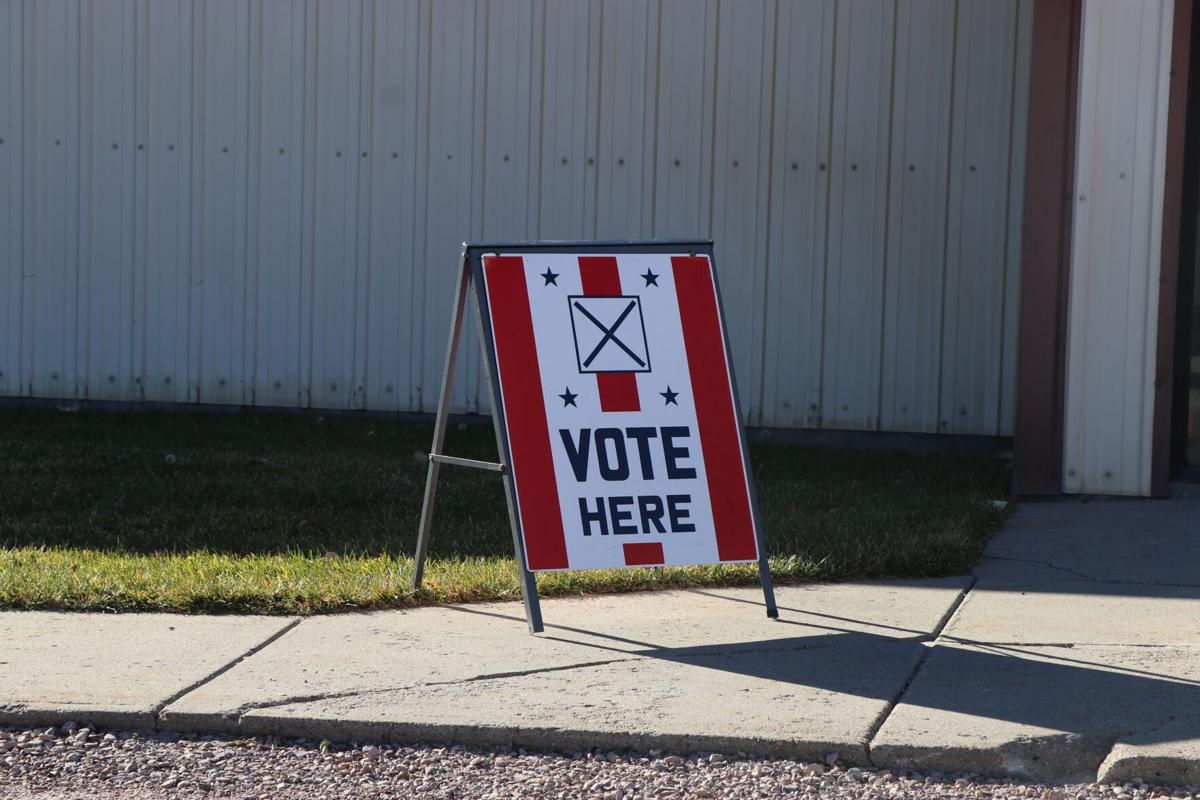 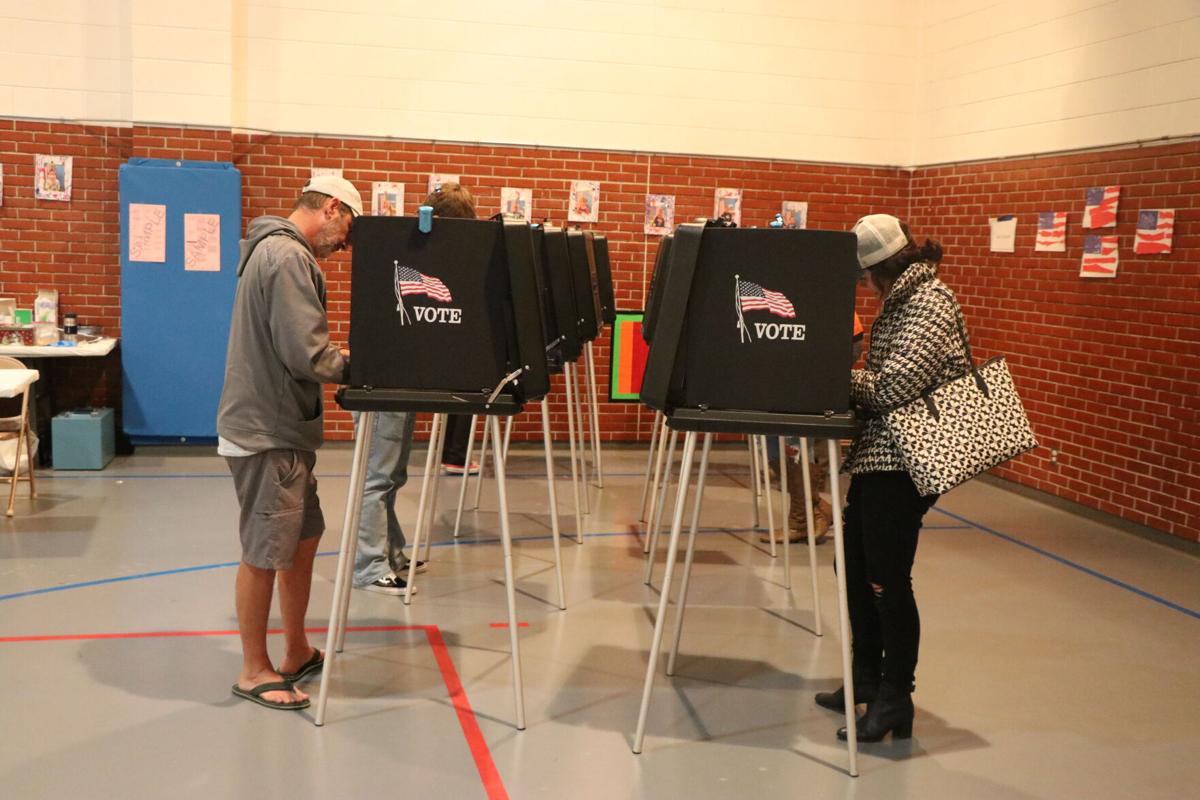 “I’m anxious and excited to get it over with,” said Nancy Ray as she was given her ballot to fill out.

Red shirts as well as Trump 2020 and ‘Make America Great Again’ apparel were popular among our area voters.

The lines at the polls were seen in Alliance at the Burkholder Building as well as across Nebraska and the Nation.

Box Butte County Election Commissioner Judy Messersmith has been involved with the election process since 1993.

“I don’t think we’ve ever seen numbers like we did on this Election Day,” said Messersmith. “I can’t say enough good things about my staff and the poll workers; it couldn’t be done without them. It was a very difficult election with the high numbers and COVID prevention measures.”

She added, “It was one for the books that’s for sure. We’ll have final numbers after the canvasing board meets on Friday.”

Aside from the much anticipated presidential nomination the most important race on the ballot for Hemingford residents was the Hemingford Village Board member election. There were three seats available with four candidates up for nomination. A total of 927 votes were cast for the Village Board members. New comer Jake Frost received the most votes with 265 with incumbents Richard Wacker and Lynda Novotny right behind him with 248 and 226 votes. Each will serve a four year term as a Hemingford Village Trustee.

“Thank you, I’m looking forward to serving Hemingford,” said Frost. “Our village has great people and a great future. I’m excited to bring a younger perspective to this town as we look to the future.”

Incumbent Marcella Thomas fell short with a total of 188 votes.

“Congratulations and welcome to new and returning Board of Trustee members Jake Frost, Rick Wacker, and Lynda Novotny,” said Village Administrator Barb Straub. “Thank you Marcie Thomas for your time and community-minded service to the Village of Hemingford.”

As for Presidential and Vice Presidential votes cast in Box Butte County, there were a total of 5,099 votes for what was projected to be a close race. Of those votes 3,920 were for Trump/Pence and 1,037 were for Biden/Harris.

There will be a new member of the Box Butte County Board of Commissioners this coming year with Steve Burke receiving 4,545 votes.

All three were incumbents that will serve another term.

There were two positions open on the Alliance City Council Board. Incumbent Brian Mischnick received the most votes with 2,133 with new comer John S McGhehey also elected with 1,981 votes.

Nominees not elected were Gary A Goodell with 1,052 votes and Mara Andersen with 1,093 votes.

Andersen had unofficially pulled out of the race as she is the Executive Director of the Alliance Recreation Center and with the current pandemic she thought it would be best if she focused her attention on the ARC. She plans to run again sometime in the future.

There were five up for nomination for one of three seats on the Alliance Board of Education.

Longtime Alliance Band Instructor Dave Rischling blew the other opponents out of the water with an overwhelming total votes of 3,040.

Also elected were Jake Sylvester with 1,737 votes and Shana Brown with 1,758 votes.

Incumbents Tim Richey and Karen Trussell were not reelected.

For the President/Vice President race the totals were Trump/Pence with 2919 and Biden/Harris with 1076.

State-wide, Senator Ben Sasse remains in office as does Congressman Adrian Smith and representative for the Legislature for District 3 Tom Brewer.

Hemingford Village Board Incumbent Lynda Novotny signs in to vote with the help of poll worker Marla Wade. Peggy Moser stands in the background with Novotny’s ballot in hand. Novotny said she was anxious for the results as she was one of the four running for three seats on the Village Board