Chadron’s Broc Berry attempts to block Bobcat Daren McConville from making a shot during the game with Chadron on Dec. 29. 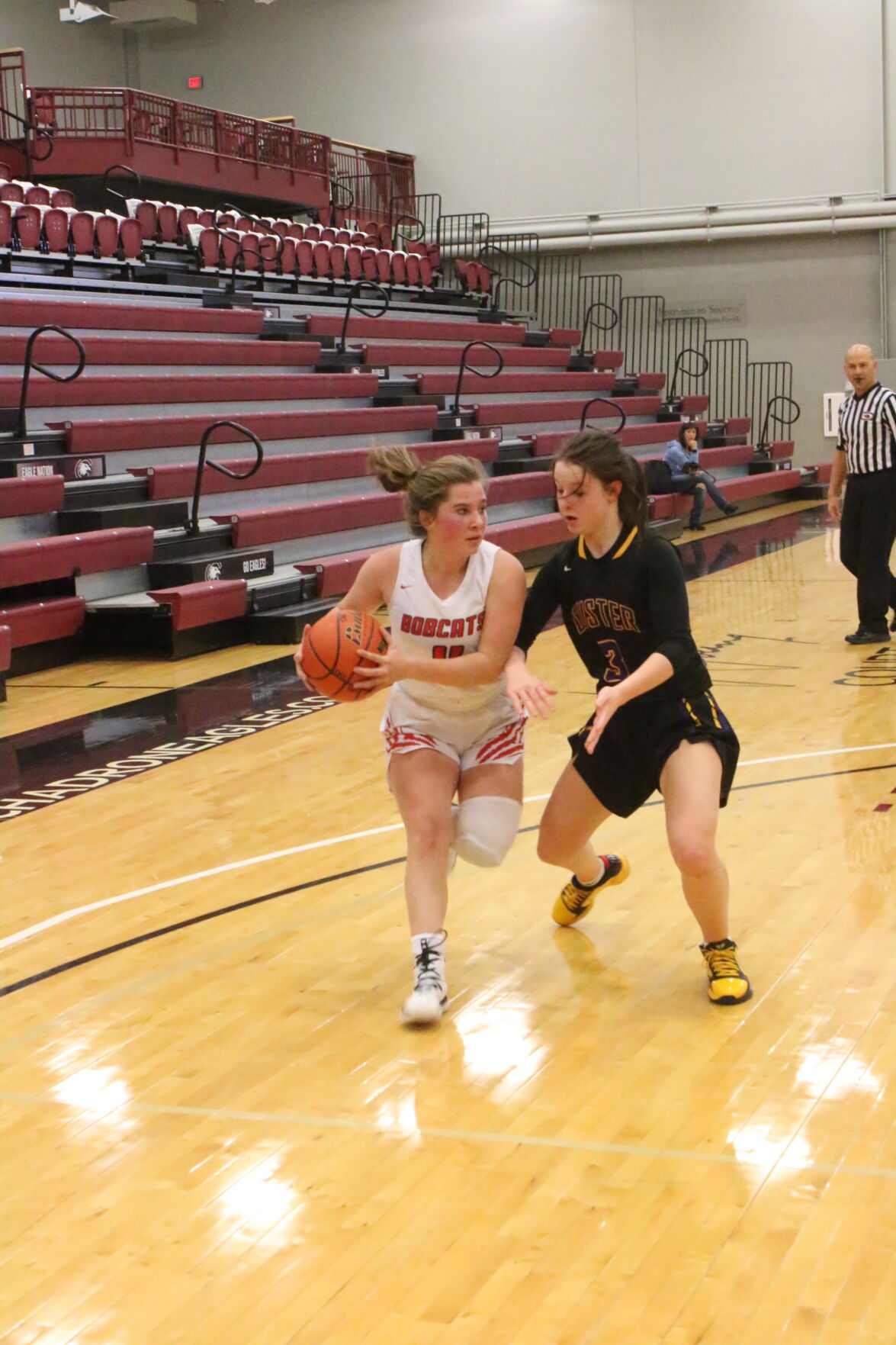 Bobcat Avery Davies heads toward the basket during the game on Wednesday morning.

Both Hemingford teams were scrappy, but could not keep up with the Chadron Cardinals during the opening round of the Chadron Rotary Club’s Holiday Basketball Classic on Tuesday, December 28.

The Chadron won the girls’ game 52-32 and took the boys’ game 56-37.  The fact that the Hemingford teams had not played since Dec. 12 after dates with Hay Springs and Leyton were postponed because of those teams’ COVID issues may have hampered the Bobcats.

The Hemingford girls played Custer in the consolation contest Wednesday morning while the Hemingford boys took on Valentine in their game to decide third place.

The Valentine girls defeated Custer 38-33 and the Custer boys overwhelmed the Badgers in their opening-round tilt 68-43.

The Hemingford girls got off to a fast start, making four of their first six field goal attempts to take an 8-2 lead in just over two minutes.  Sophomores Catherine Briner and Avery Davies each hit two of the buckets and went on to lead the LadyCats in scoring with 12 and 10 points, respectively.

But the Cardinals, who finished with a season-high eight 3-pointers, made two of them near the end of the opening quarter and led 16-12 when time ran out.

The second quarter was a big problem for the youthful Hemingford team. Davies scored the Cats’ only points on a late field goal while Chadron again tallied 16 points to take a 32-14 halftime lead.

Hemingford rebounded in the third frame, scoring 13 points with Bryner making five and Davies four.  For the third period in a row, Chadron finished with 16 points, nine of them on 3-pointers, to own a 48-27 lead going into the last period.

Both coaches gave their alternates a chance to play in the holiday classic in the fourth quarter, when Hemingford edged the Cards 5-4.

Besides the double-figure scoring by Bryner and Davies, five teammates made a field goal.  The were Destiny Hanson, Kambree Walker, Mikayla Kumpf, Elizabeth Mayer and Aly Turek.

Chadron was led by freshman Demi Ferguson with 14 points. Macey Daniels and Allie Seymour, both of whom sank a trio of 3-pointers, added 11 and nine points, respectively.

The Hemingford boys pretty well contained most of the Cardinals except for 6-foot-4 Justus Alcorn, who scored 18 points, half of them in the first quarter when Chadron took a 15-11 lead.  He also had six of the Cards’ 10 points in the second period, helping the host to a 25-18 halftime advantage.

The Cardinals pulled farther away in the third stanza, when they outscored the Bobcats 19-11.

Alcorn was the only Chadron player to shoot a free throw, going five of eight from the line. Xander Provance added 12 points, Gaurav Chima nine and Brodey Planansky, a transfer from Hay Springs, contributed eight.

The Bobcats were seven of 15 at the charity stripe. Wyland, Specht, Rick Turek and Hill all hit a trey.

Hemingford Lady Cat Kambry Walker scored 20 for her team and Catherine Bryner scored 17 before she was injured.

“It was the best team effort of the season. Four quarters of sound basketball both offensively and defensively. Looking for more of the same as the season progresses.”

After Monday’s game, the Hemingford boys hold a 3-6 record and the girls are 4-5.

Bobcat Basketball records near even

Chadron’s Broc Berry attempts to block Bobcat Daren McConville from making a shot during the game with Chadron on Dec. 29.

Bobcat Avery Davies heads toward the basket during the game on Wednesday morning.