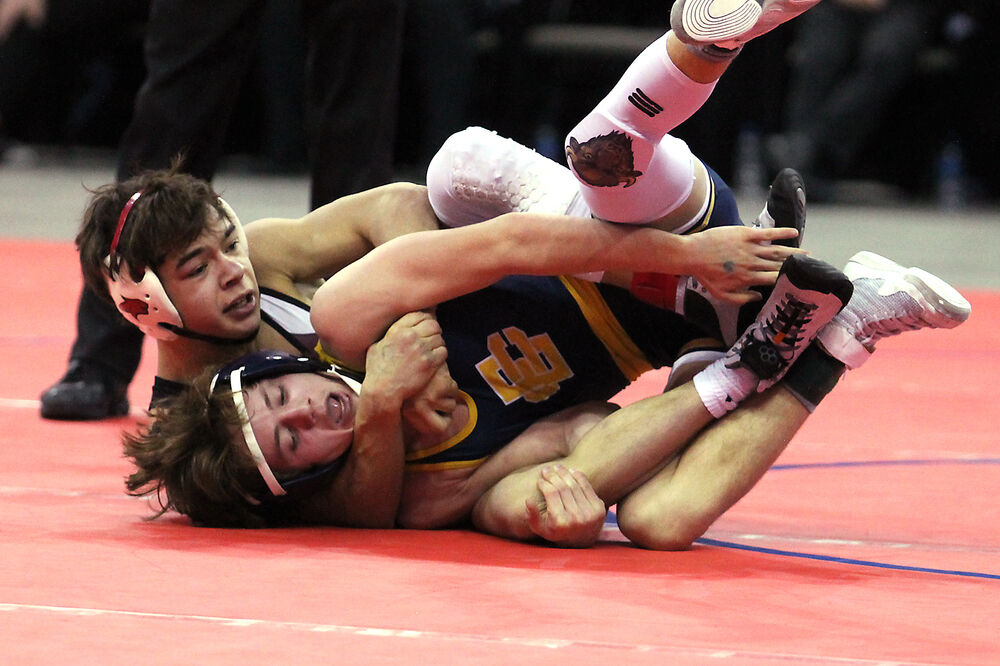 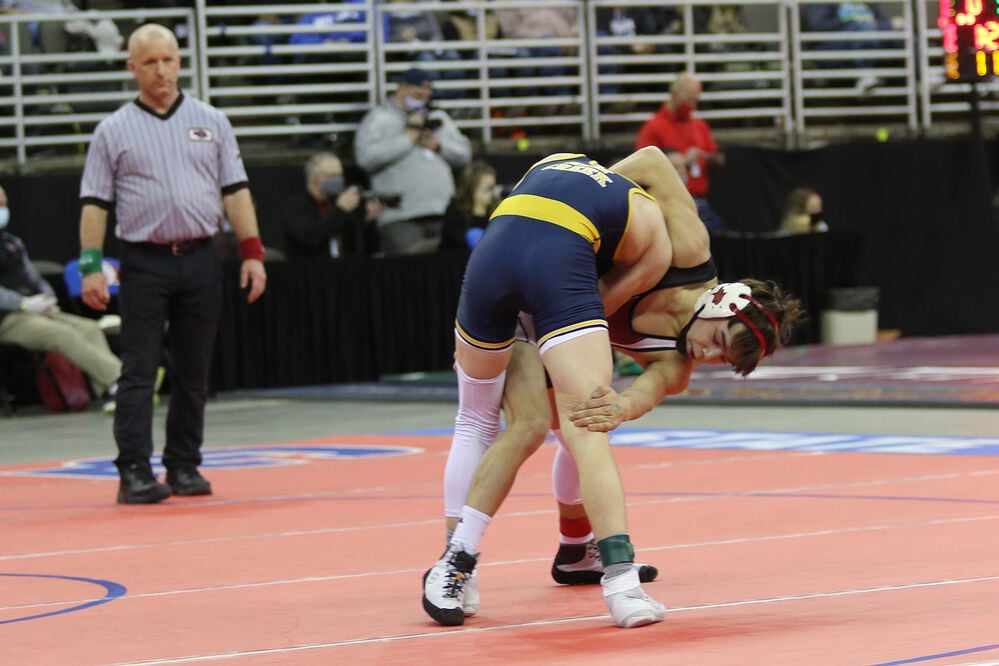 A referee looks on as Creel Weber battles Elm Creek's Jaxon Smith in the Class C state tournament on Thursday, Feb. 18 in Omaha. 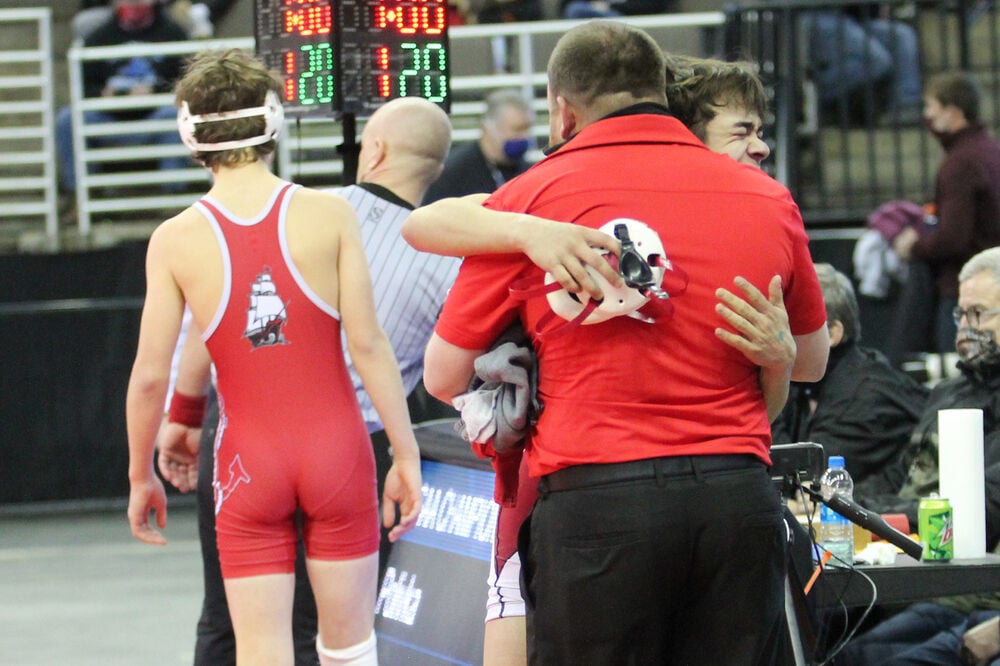 Creel Weber hugs coach Kyle Walker after picking up a win in the Class C state tournament on Thursday, Feb. 18 in Omaha. 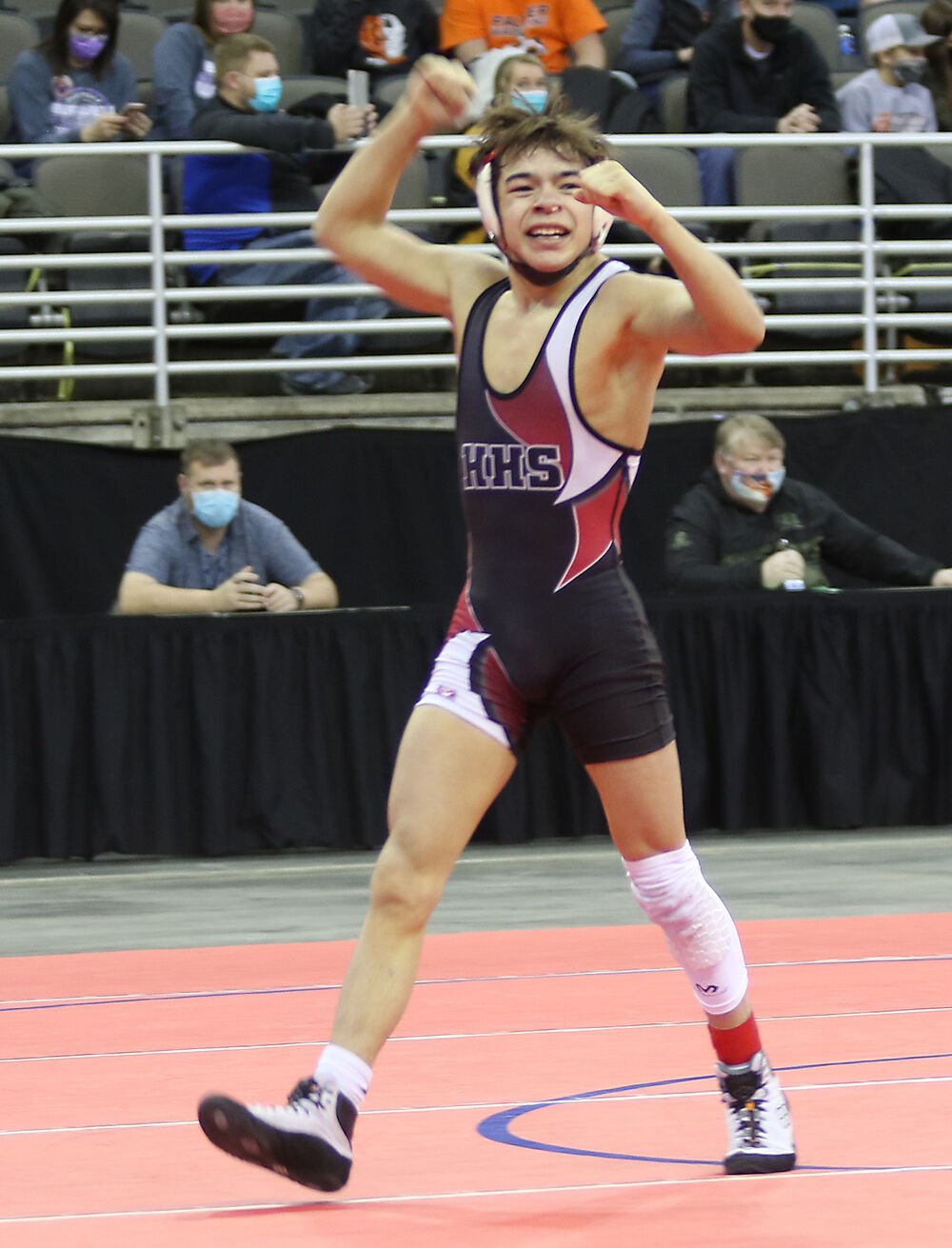 Creel Weber celebrates after a win in the Class C state wrestling tournament in Omaha on Thursday, Feb. 18.

Sophomore Creel Weber finished second in the district tournament to earn his second berth in the state tournament.

His road to this year’s state tournament was possible by the work Weber has put in over the course of his wrestling career.

“My dad was a coach and my brothers were wrestling when I was younger. So, I was always going to wrestling meets,” he said.

Weber has always had lofty goals, he said.

“When I was little I used to say I wanted to be in the Olympics. I’ve always liked wrestling, he said.

That lifelong passion for wrestling has driven him to succeed in the sport.

Last year, Weber earned his first spot in the state tournament. He had high hopes going into the tournament, but he knew it wouldn’t be easy since he got a pretty tough draw.

“When I looked at my bracket, I knew it was going to be hard to (earn a medal),” he said.

Still, Weber had lofty goals heading into the tournament, he said.

“I was hoping for a fourth place finish, but I was still glad that I placed,” he said.

Weber said he had some nerves, but having been to the state tournament last year helped ease them a bit.

“There was a little bit more pressure, but it wasn’t much different. I kind of had a feel for (what to expect at state),” he said. “It was a little different this time, there were fewer people. I felt like most of the people there had seen me wrestle.”

Other than the small crowds and tighter schedule, Weber said it wasn’t much different than last year.

“I think it felt pretty normal, other than not having fans there,” he said. “I feel the same way (during matches), no matter what. You still have other wrestlers yelling for you. When you add the crowd in it’s just a little bit louder.”

Besides, Weber said he tunes out all of the crowd noise because he is concentrating on the match and listening for instructions from his coach.

Now that the season is over, Weber said it is time to start preparing for next year.

Weber said he plans to treat the offseason like he has in the past, where he spends most of his time working or going to wrestling camps.

Weber said he did add some things to his offseason repertoire last year.

“I did some running and I did some weightlifting this summer. I think that was the biggest thing that helped. Really, just not sitting around.”

Weber hopes his offseason training will help him prepare for even more success next year.

“It gives me a little more motivation and now I know what it takes to hopefully get to that first place spot,” he said. “I really want to try to get top four, if not first place.”

A referee looks on as Creel Weber battles Elm Creek's Jaxon Smith in the Class C state tournament on Thursday, Feb. 18 in Omaha.

Creel Weber hugs coach Kyle Walker after picking up a win in the Class C state tournament on Thursday, Feb. 18 in Omaha.

Creel Weber celebrates after a win in the Class C state wrestling tournament in Omaha on Thursday, Feb. 18.