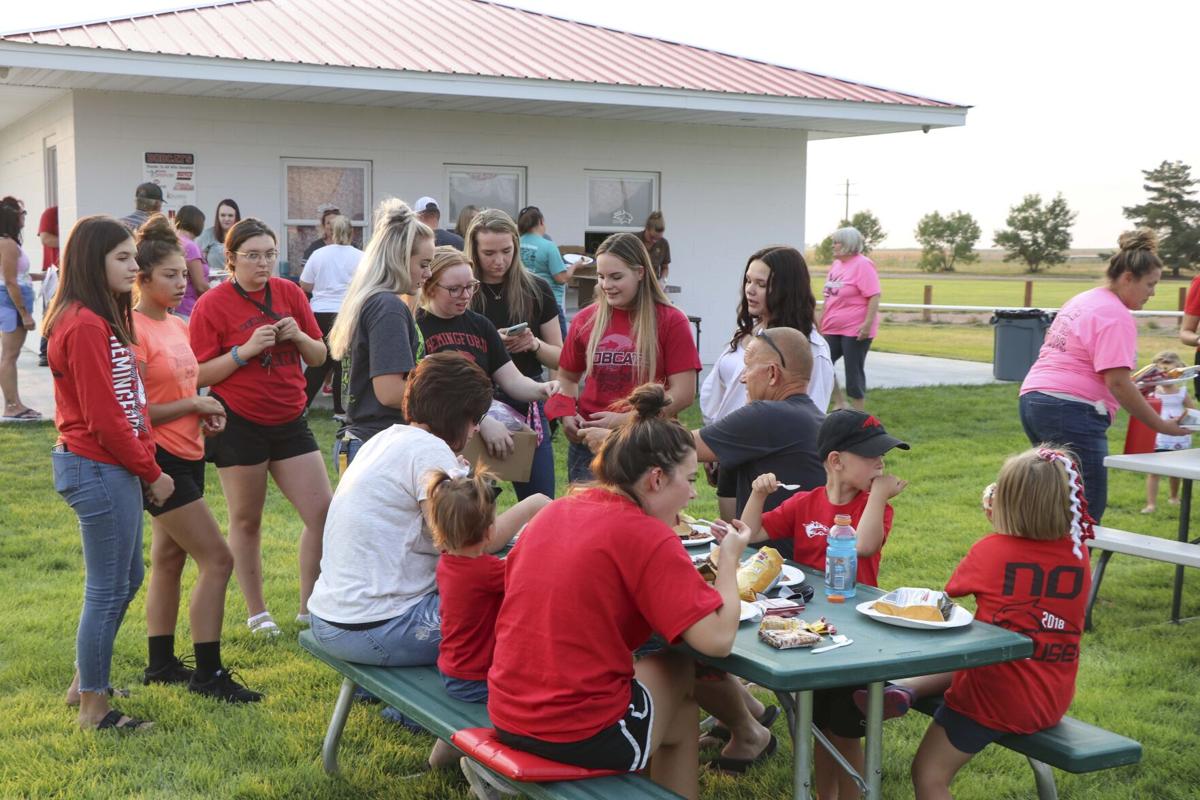 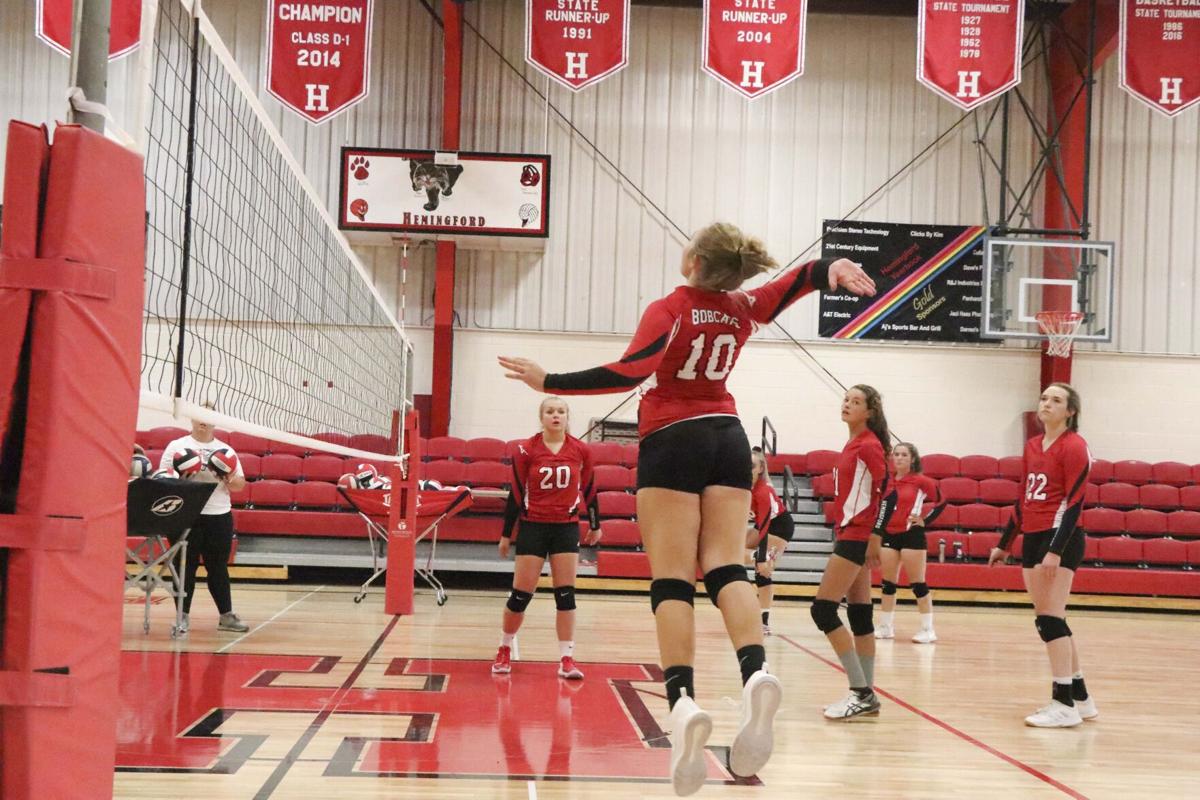 Bobcat Senior Rayne Jespersen goes up to spike the ball during warm-ups before the scrimmage started. 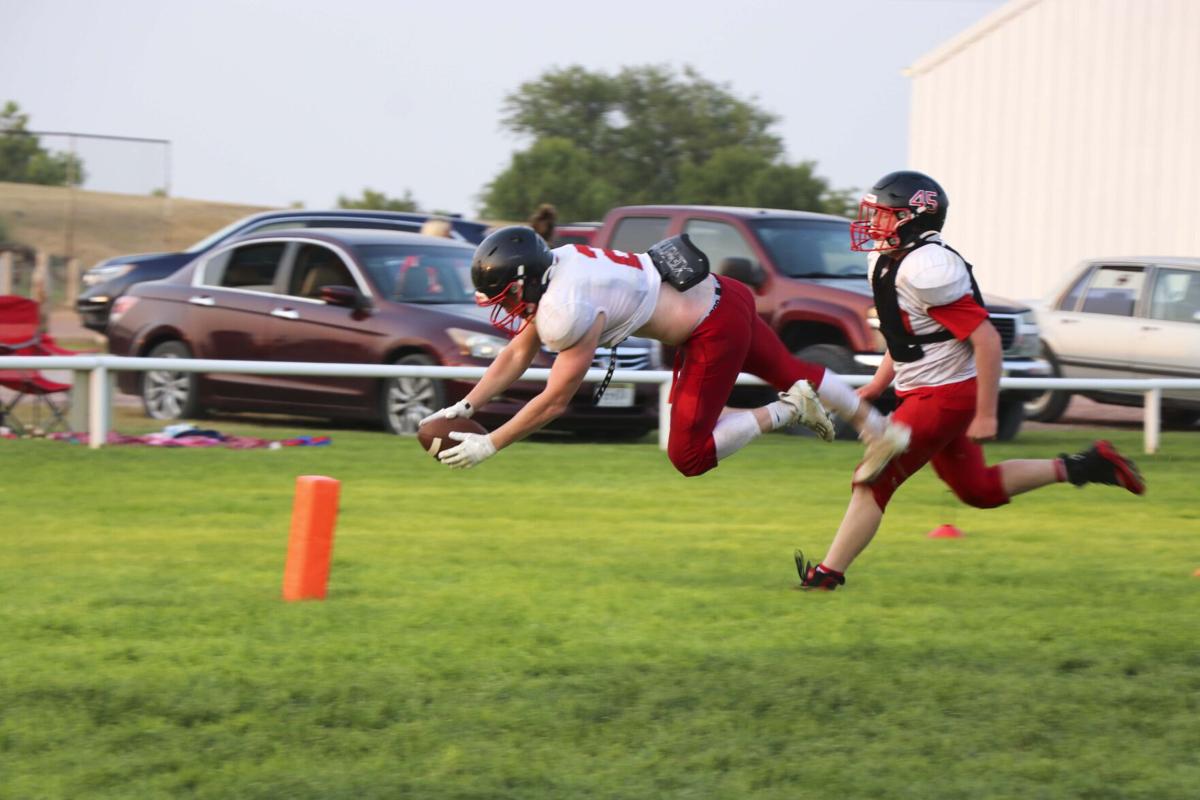 Senior Bobcat Quarterback Brian Turek dives into the endzone with the ball during the scrimmage game on Friday night.

Fall sports for the Hemingford Public School kicked off on Friday afternoon with the annual Hemingford Booster Club Tailgate Party.

The party began at 4 p.m. in the gym with the volleyball scrimmage.

“The girls are so excited to actually play a game, even if it’s against each other,” said Head Coach Melinda Cullan before the scrimmage started. “They’ve been practicing so hard.”

Warm-ups were done and the Lady Bobcats had just begun when the gym went dark!

They were pulled to the side by the coaches. Athletic Director Todd Westover and Principal Daniel Kluver immediately began to look at the breaker box when they discovered that it was a Hemingford wide power outage.

“Let’s play in the dark!” yelled one of the volleyball players.

“They were bummed,” said Cullan. “Especially since the Jamboree scheduled for the Tuesday before that was cancelled.”

They were able to replay the scrimmage on Monday night though.

“They were excited to play in a game like situation and showcase their new uniforms,” Cullan added.

“We have grown so much in the last year,” said Cullan who is excited for this season. “The girls were so excited to get back in the gym this summer and they’ve worked really hard.”

The first game is tonight, Thursday, Aug. 27th at home starting at 4 p.m.

Hemingford School Activities are reduced to half capacity as of right now to help prevent the spread of the coronavirus. Because of that reason, seating will be limited during this year’s volleyball games. Each player will be given four tickets to each game. Spectators must have a ticket to enter. No exceptions.

The home crowd must sit on the home side and limit interaction with the visiting teams. Masks are not required but are highly recommended when you are not able to social distance.

There will be a charge to watch the Scottsbluff Invite Thursday, Aug. 27th at 3:45 p.m. in Scottsbluff.

“It would be awesome if you’d come out and support the Cross County kids,” said Booster Member Reyna Ansley. “It’s a lot of fun to cheer them on. We all wish them luck on their season.”

Areas of identified risk with Cross County include start and finish areas. Some possible changes to meets to help manage these risks:

The Football Scrimmage began around 6 p.m.

Coach Josh Dean thanked everyone for their support.

The first home varsity football game of the season is against Garden County on Friday, Sept. 4 at 1 p.m.

Some changed for the home football season are:

“There may be changes with every event,” said Ansley. “Just go with it. And if you are asked to wear a mask so that you can attend a game, please just wear a mask.”

Bobcat Senior Rayne Jespersen goes up to spike the ball during warm-ups before the scrimmage started.

Senior Bobcat Quarterback Brian Turek dives into the endzone with the ball during the scrimmage game on Friday night.