OMAHA — The Dale Nichols painting hung on the living room wall of the Omaha home, a backdrop to the family’s lives for three generations.

Until they decided to sell its contents, two siblings who grew up in the house — who want to remain anonymous — had no idea the work in oils hadn’t been seen since an exhibition in New York in 1938. Or that Dan Sanley had been searching for it for years.

It’s a painting from his Uncle Dave and Aunt Lilas’ farm near Surprise, Nebraska. Lilas told Sanley the story of how her brother Dale Nichols had created “The Sanley Farm” while sitting in a cornfield in 1933, unfazed by the winter day’s freezing temperatures. He’s best known for his rural landscapes.

“This was his first oil painting and red barn. He was famous for subsequent red barns in his rural paintings,” Sanley said. “It’s the only rural painting he did from reality. All the rest of his paintings were his own concepts.”

‘Is that the same wall?’ — The disappearing mural at 13th and F in Lincoln

The painting sold for $350 in New York in 1938. A photograph of it was featured in the World-Herald’s farm report in 1940, but then it seemed to vanish.

The bill of sale from that New York show — stuck to the back of the painting — was a delightful surprise when Joel Ward, owner of Twist of Fate Estate Sales, moved it to a safer spot for the sale this weekend. The address of the home will be released on the company's  website Friday morning.

Ward discovered the painting’s history and Sanley’s search as he was preparing for the sale. Sanley had created a Facebook page called Nebraska Bohemians in 2011 to celebrate his Czech heritage, and had posted details about the painting, but no one had ever come forward. The World-Herald also did an article that year about its disappearance.

“He (Sanley) was beyond excited that we had located the painting,” Ward said. “I texted him a picture. I think he was kind of in disbelief.”

Sanley, who is 73 and now living in San Diego, said he and his siblings still own the family farm east of Surprise and adjacent to the farm in the painting. Sanley is working with the Bone Creek Museum of Agrarian Art in David City to try to acquire the painting and preserve the Nichols history.

The museum has 11 original Nichols paintings in its collection, plus four originals that are on loan from the City of David City and David City Public Schools. It also has screen and woodcut prints, pencil drawings, illustrated letters and original illustrations for his book, "A Philosophy of Esthetics.”

“My dream is to get it and put it in the museum,” Sanley said.

But that’s where things get complicated again. The painting recently was appraised for $60,000 to $75,000. Some of Nichols' later paintings sell for much more.

Ward said while the family likes the idea of it going to the museum, a bid from Sanley and Bone Creek didn’t meet its expectations. So, it will be part of the estate sale. It's already drawing national attention.

​“The museum is the perfect buyer,” Ward said. “I did get them (the family) to agree that if we have no other offers, we will sell it to the museum.”

“It would be nice if the person who buys it would loan it to the museum,” he said. “If I can get it there on a permanent basis, that would be wonderful.”

Valley Farm Between the Bluffs

The Young Corn God Weeping for His People

Receive the latest in local entertainment news in your inbox weekly! 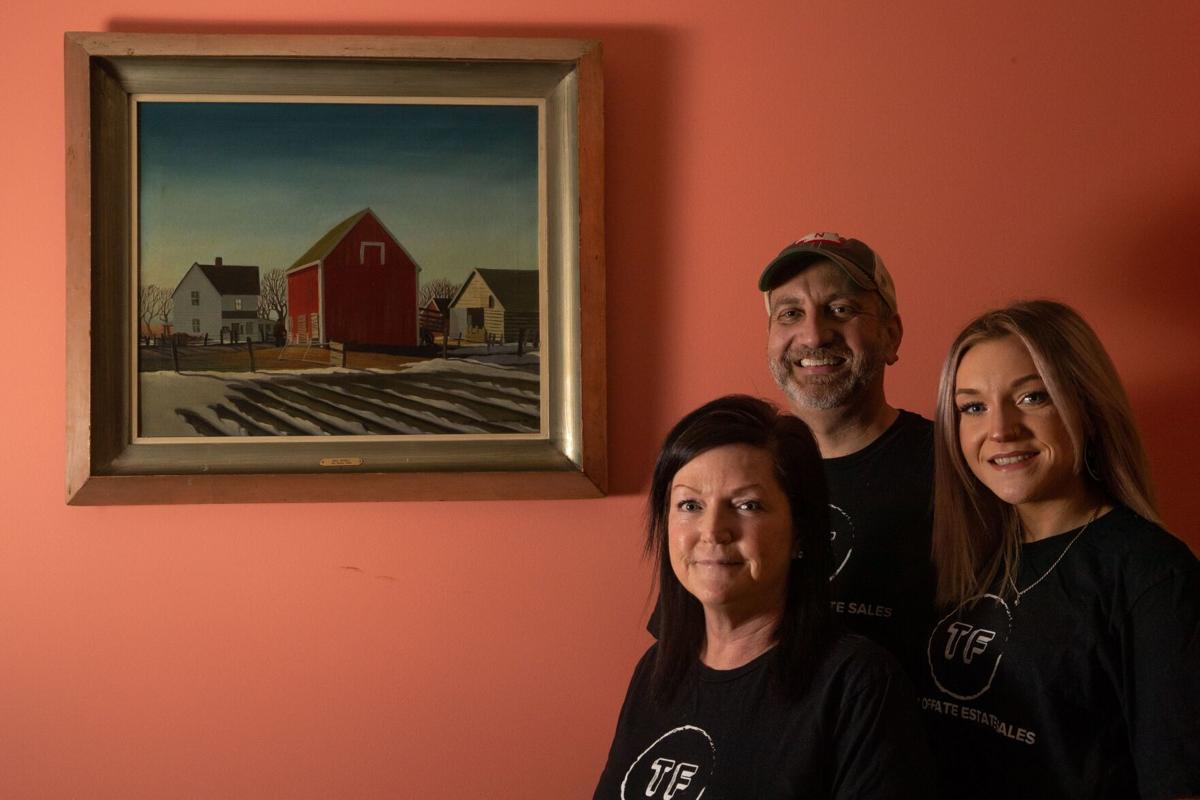 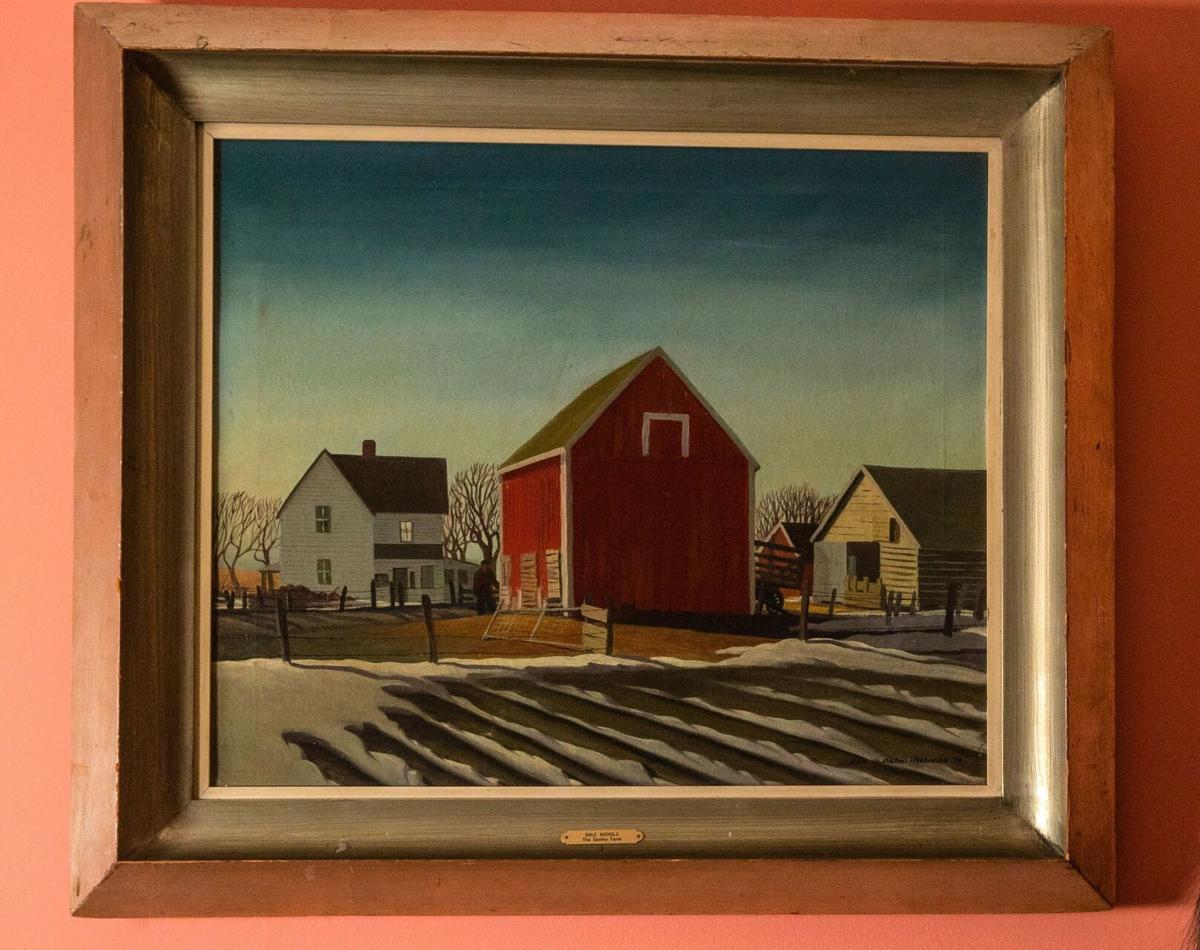 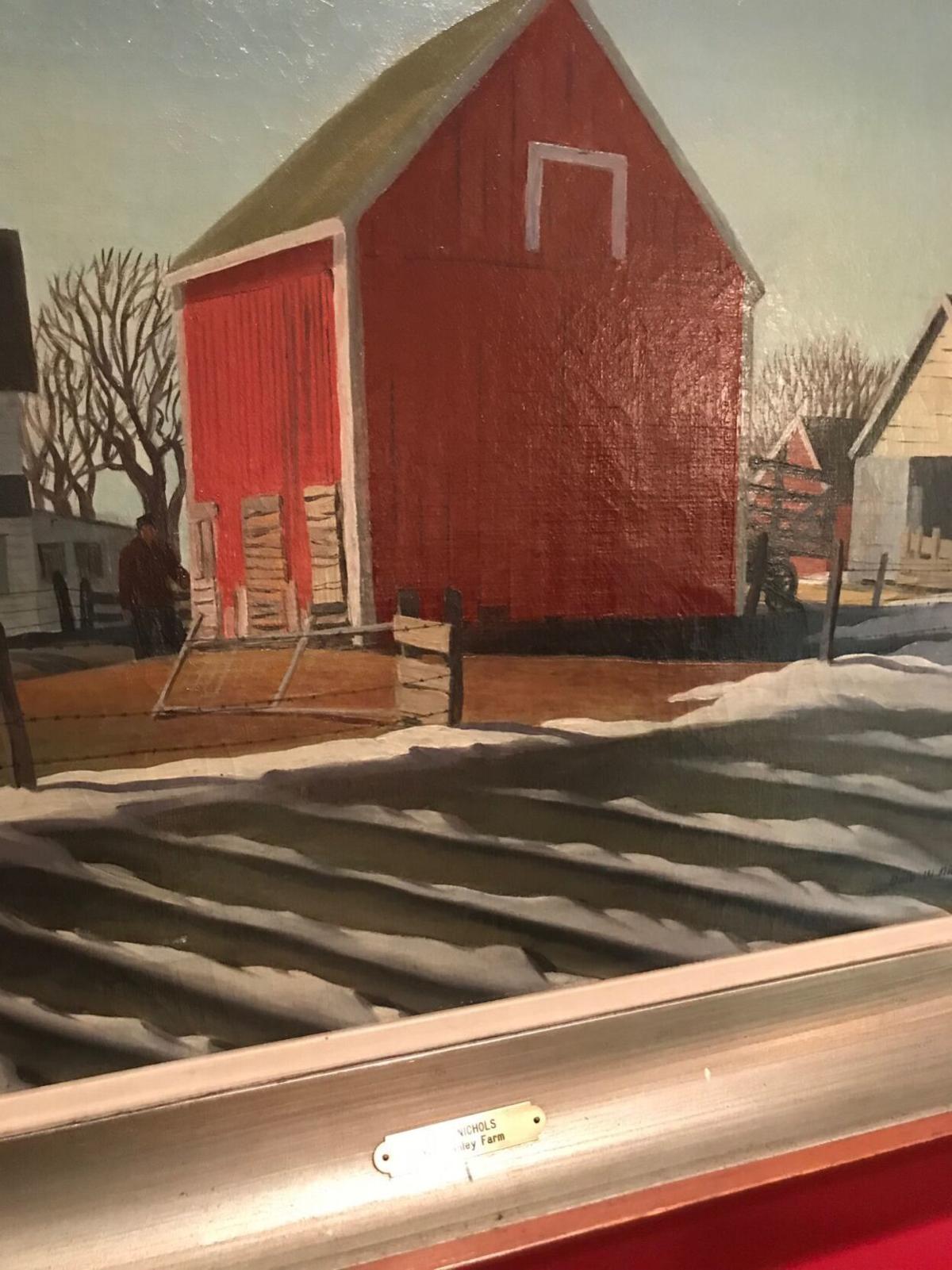 The first of the red barns that appeared in many of Dale Nichols' paintings.

Joel Ward found this information on the back of the painting when he moved it for the sale. 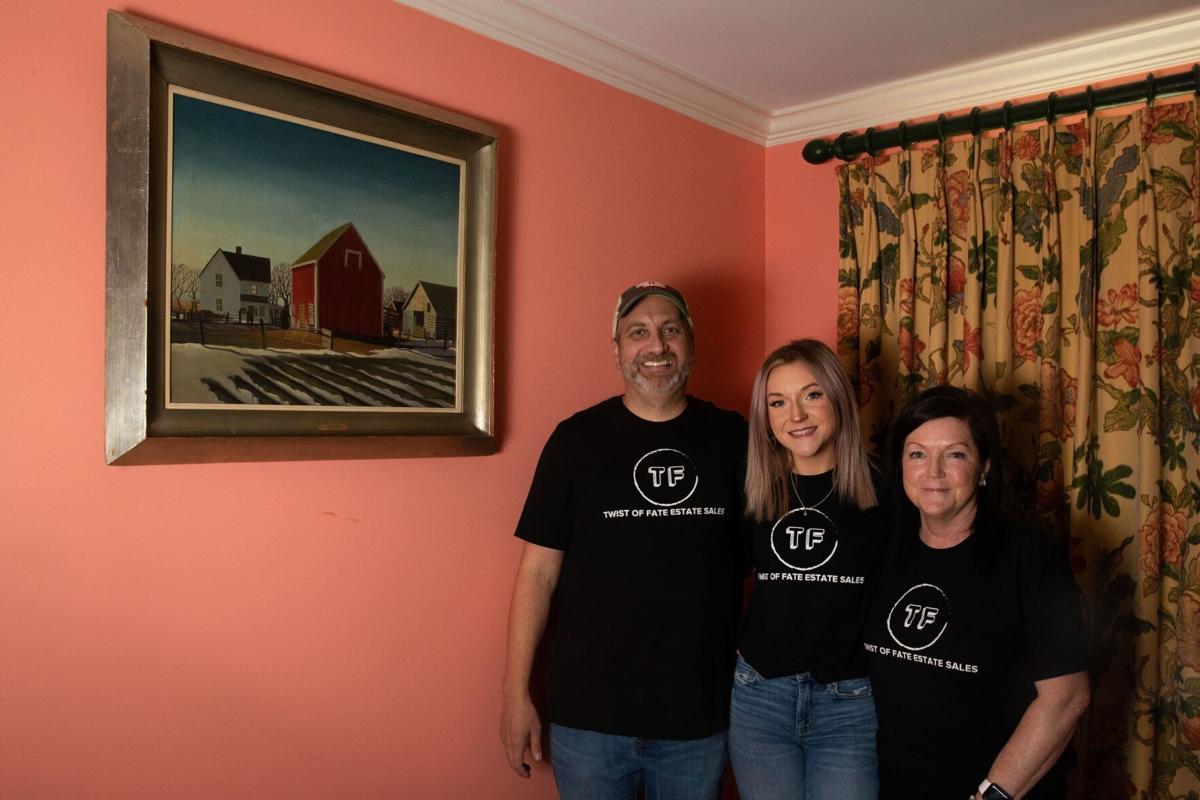 Twist of Fate Estate Sale's Joel Ward (left), Zaley Woodington and Tachele Linley-Ward stand in front of Dale Nichols painting The Sanley Farm. It has been appraised for between $60,000 to $75,000.