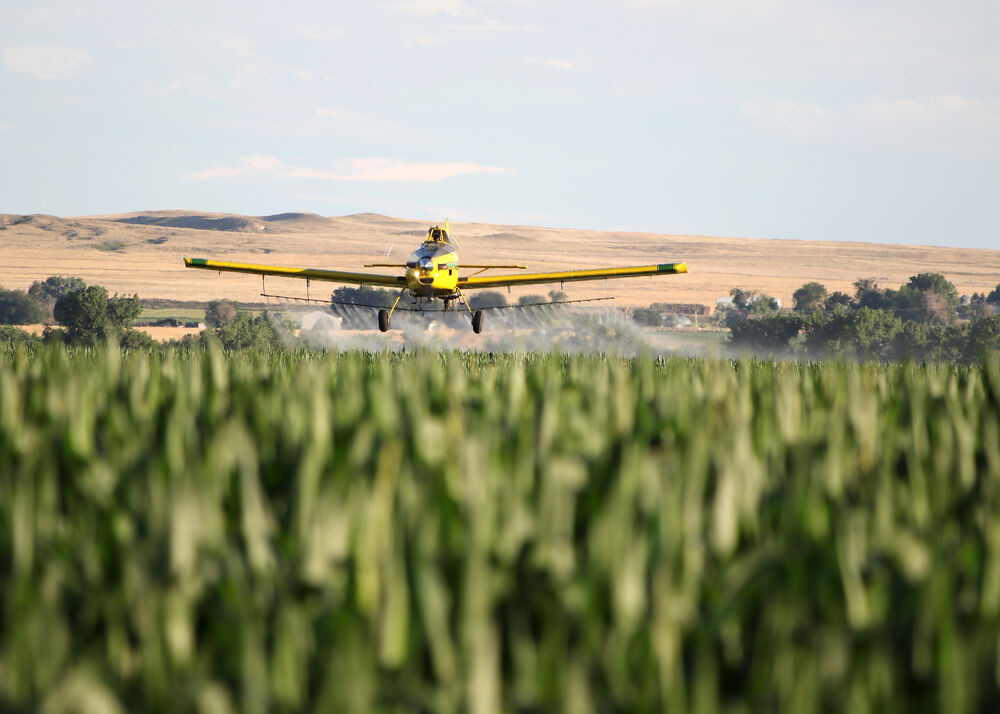 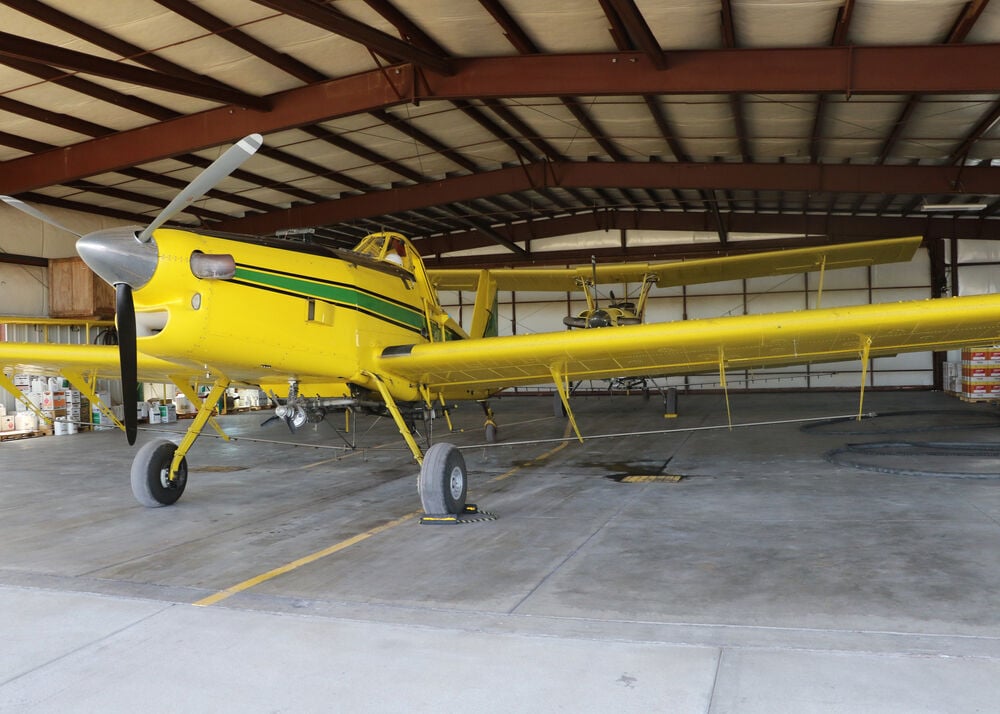 Four of Ag Flyers spray planes, equipped with guided GPS, sit inside of hangers at the Torrington airport. 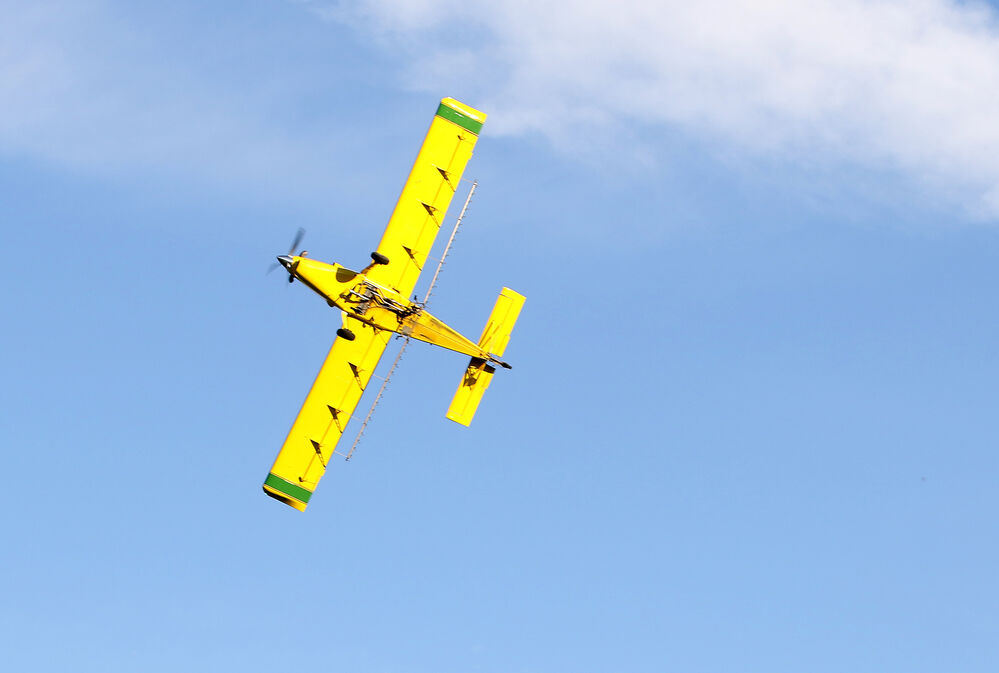 When spraying, Ag Flyers pilot John Otten uses guided GPS patterns which require him to perform specific maneuvers at the end of each pass. 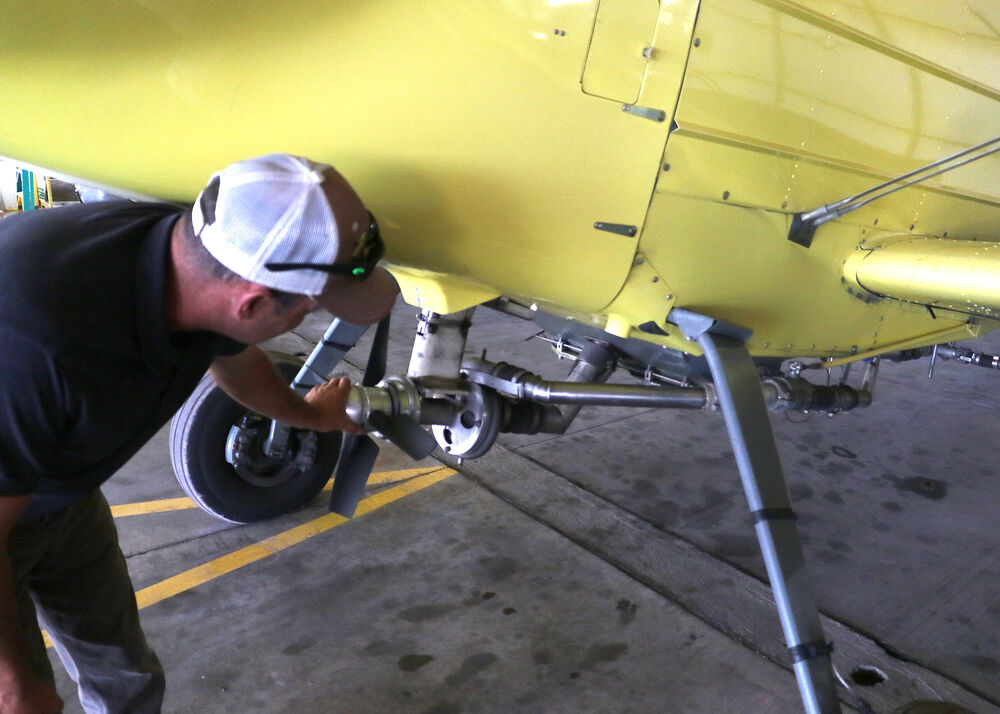 Spray planes used by Ag Flyers are equipped with technology which allows pilots like John Otten to fly efficiently.

John Otten swoops down above fields of row crops and rangeland while dodging trees and jumping power lines at speeds over 100 MPH in a bright yellow aerial application plane during an average day at work.

Otten laughed and said the most dangerous part of his job is driving to the airport.

“I had an old timer, a long time ago tell me, this is a great business. I love the customers, the farmers and the variety of people I work with. And you can make the decision to either have a 40-year career and retire as an old man and look back fondly on it, or you can have a short career and end up in a wheelchair.

Over the last 10 years, Otten has logged thousands of hours in flight working alongside Ag Flyers owner and fellow pilot Dean McClain at the Torrington airport. Otten learned to fly in a plane which still sits in their hanger to this day.

“I never thought I would end up doing this, it has always been an interest, but you never realize you are going to end up here,” Otten said, “I really enjoy my job, I am excited to go to the airport every day, and the people I work with are fantastic. Farmers, ranchers and people in that lifestyle are just a joy to work with.”

Otten said he began his career with a commercial pilot's license early on and worked his way up to flying spray planes over time.

“The typical way the industry works is you will build a relationship with that operator and, most of the time, you will load airplanes and wash airplanes for a period of time, two or three years, let's say and then you will start working in to all this,” Otten said.

When he first began learning the process of spraying, Otten said, he flew a plane filled with water over easy fields without obstacles in a slow and forgiving plane, which taught him the skills he puts to use every day.

“I'ts just thousands of hours of doing it. During the typical season, I will spray for about 500 hours,” Otten said, “You just get a feel for it’s like anything else. ... It sounds weird to talk like that about a machine but you just really do get a feel for it.”

Throughout the year, Ag Flyers spray about 35,000 acres of row crops and rangeland areas spanning across eastern Wyoming and portions of western Nebraska, 10 months out of the year.

“We have four spray planes. Two of us, myself and the owner fly them, and between those times we do maintenance, so there is always something we are doing. ... We spend a lot of money and time throughout the season to keep everything in tip top shape. It's not just from a safety stand point but a production standpoint,” Otten said, “It is just like when the sun shines you got to make hay, and you have to be ready when there is a window or little bit of time to get applications done.”

Working hand in hand with agronomists and weed and pest specialists, Otten said, a lot of their work involves range and pasture land spraying, as some noxious weeds continue to grow year round.

As a business, Otten said, Ag Flyers have the ability to accommodate everyone in terms of acre size ranging from five acres to large projects spanning thousands of acres.

“There are a lot of different people with a lot of different business models, but concerning this business, we treat everybody the same, the same price for everyone,” Otten said. “Whether its five acres of hay sprayed in someone's backyard or its a customer with 3,000 acres, we treat them all the same.”

Four of Ag Flyers spray planes, equipped with guided GPS, sit inside of hangers at the Torrington airport.

When spraying, Ag Flyers pilot John Otten uses guided GPS patterns which require him to perform specific maneuvers at the end of each pass.

Spray planes used by Ag Flyers are equipped with technology which allows pilots like John Otten to fly efficiently.