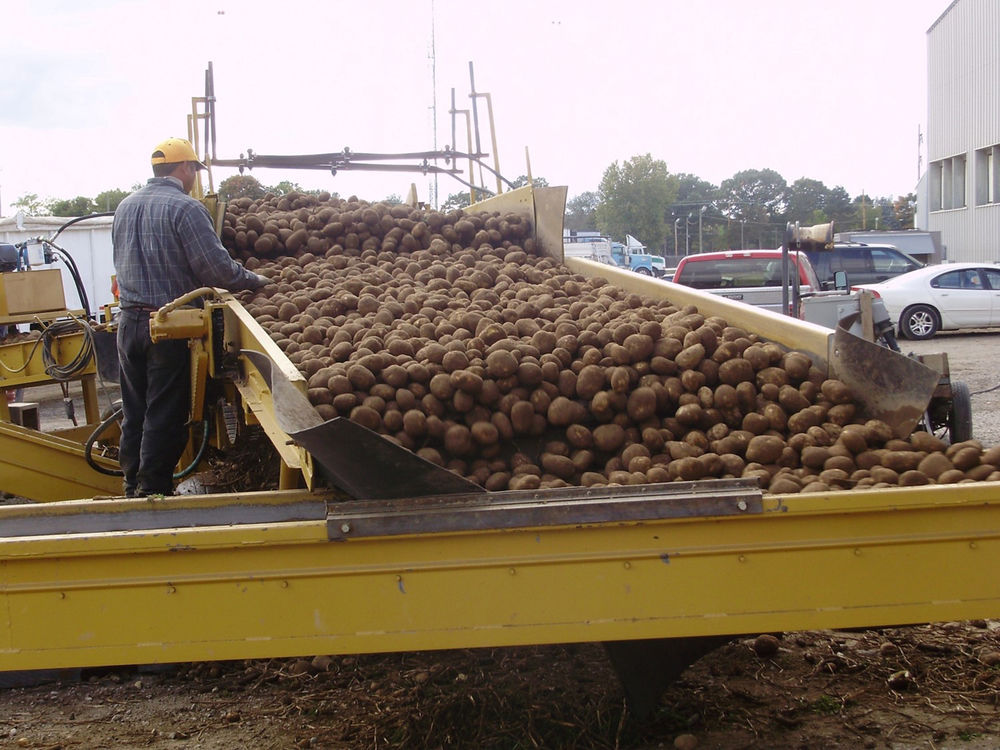 A Walther Farms employee inspects "the river of potatoes" in this undated courtesy photo. 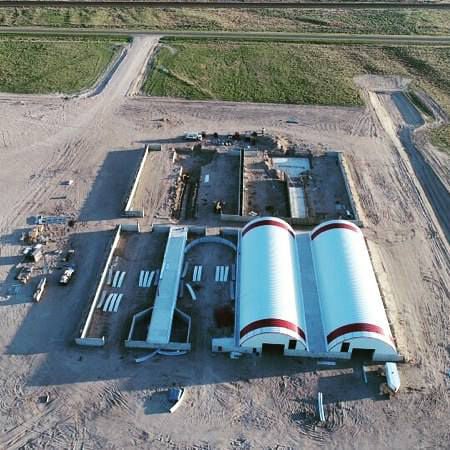 This undated courtesy photo shows the progress being made on the new Walther Farms potato storage facility near Lisco.

SCOTTSBLUFF — The City of Scottsbluff approved a $250,000 economic development loan to a Michigan-based potato company at its June 19 meeting.

Josh Reeves, chief financial officer for Three Rivers-based Walther Farms, said the company has been growing potatoes in the Panhandle around Bridgeport and Alliance, and in eastern Colorado near Ft. Morgan and Wray, since 2011. It is planning to relocate it’s current storage facility from Ft. Morgan to Lisco.

The current fields farmed by Walther farms need to be about 20 miles from the storage facility, Reeves said.

“The closer we can keep that radius, the better,” he said.

A number of Walther Farms employees have already relocated to Scottsbluff and the surrounding area, Reeves said. The company has spent more than $29 million in the state of Nebraska so far, and already spent more that $3.4 million with vendors based in Scottsbluff, including TEAM Auto Center and 21st Century Equipment. Added to those numbers are nearly 900 annual truckloads Walther Farms will bring to the area, meaning an increase in fuel and restaurant purchases that employees of the company will make in Scottsbluff, Reeves said.

The 41-acre, $7.68 million storage facility between Broadwater in Lisco will be able to store 560,000 hundredweight of potatoes, Reeves said, and once the facility opens it will bring in a staff of 10 salaried employees and 16 full-time positions, with two more salaried positions and 11 full-time employees in 2019 if the company moves through with plans to consolidate it’s Wray operation. The positions range from $35,000 to more than $100,000 annually, plus benefits.

Reeves said the company currently rents all of the land it grows potatoes on, and plans on adding 700 annual acres in 2017, and hopes to add 500 additional acres in 2019.

The company is also looking to expand into new test fields near Mitchell. While potatoes used to be grown in the surrounding area, Reeves said the company is exercising caution due to the fact that many diseases can linger in the soil for decades after they’ve lain dormant or been used for other crops.

“As we harvest off the field, we’ll pull them in trucks into the storage area, and run them through a grading line to pull out foreign matter and foreign material,” Reeves said.

From there, the product moves onto a “river of potatoes,” where it will be sorted. Reeves said a potato will not drop more than 4 inches at any point during the process in order to reduce issues with storage and ensure that a quality, bruise-free product is shipped.

“Part of the process is testing quality and making sure what we’re sending to the plants is something that is going to turn into a good potato chip,” Reeves said.

The piles in the storage facility will eventually reach 20 feet in height, and will be closed and stored for the season, and over the next seven months, bin by bin will be pulled, washed, graded and loaded, then shipped to different manufacturers.

Reeves said that Walther Farms has supported local 4-H programs by purchasing animals at county fairs, worked closely with the Bayard Senior and Bridgeport Community Centers, and donated potatoes to local churches, and will be looking for future opportunities to give back in Scottsbluff.

They are also looking to hire people — both full-time and seasonal workers — who are committed to agriculture.

To meet these needs, Reeves said they have hosted job fairs in Bridgeport and reached out to the applied agriculture program at Western Nebraska Community College and local FFA programs.

A Walther Farms employee inspects "the river of potatoes" in this undated courtesy photo.

This undated courtesy photo shows the progress being made on the new Walther Farms potato storage facility near Lisco.