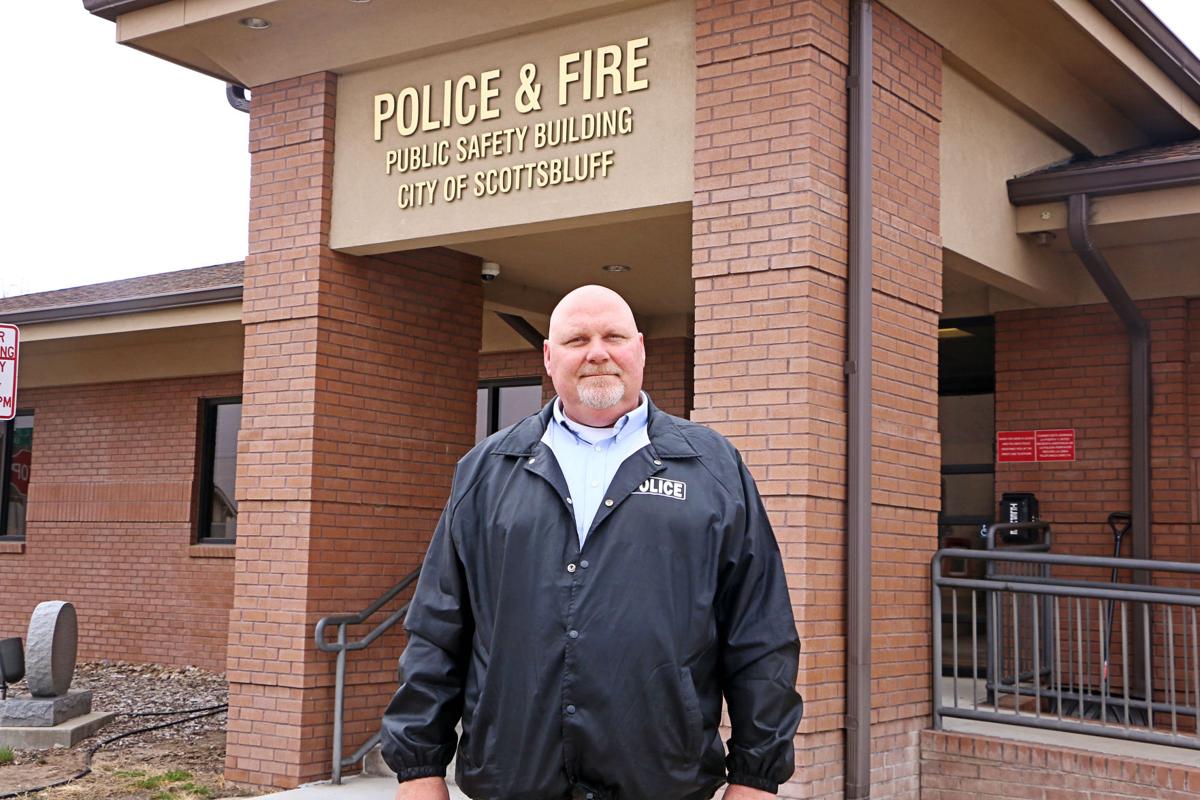 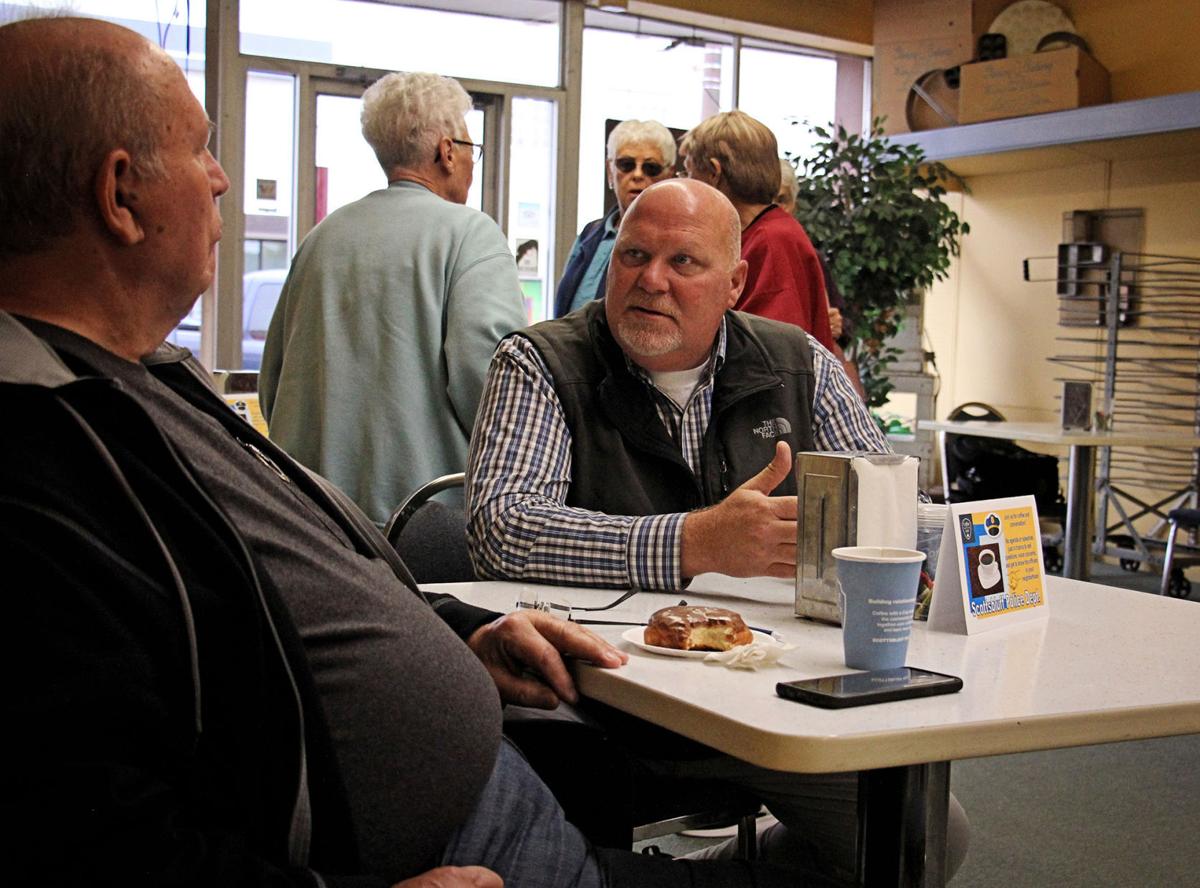 Scottsbluff Police Capt. Brian Wasson talks with Dana Gandy during a National Coffee with a Cop event on Oct. 2, 2019. Gandy, who formerly worked in 9-1-1 dispatching, said he attended coffee with a cop to support local law enforcement and inquire about volunteer opportunities. 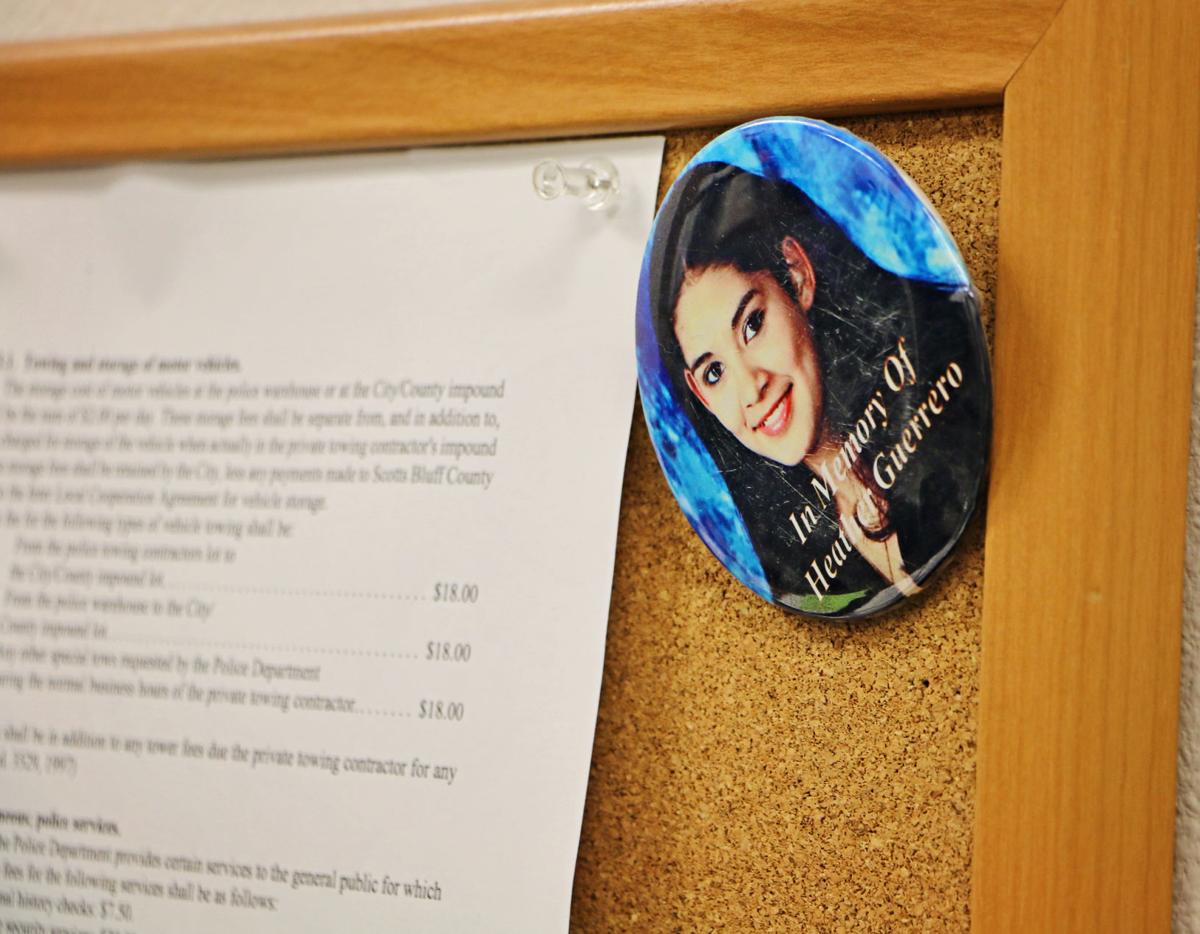 A pin with the school photo of Heather Guerrero remains on a board in the office of Capt. Brian Wasson. An interview by Wasson with convicted murderer Jeffrey Hessler solved the kidnapping and murder case.

For the last 23 years, Scottsbluff Police Captain Brian Wasson’s name has been on the roll of officers at the local police department.

It’s a career he always remembers wanting to do.

“One of my initial memories was that we (Wasson and his brother, Brent Wasson, who is a lieutenant with the Gillette, Wyoming, Police Department) always wanted to be police officers,” Wasson said, saying he can remember the boys wanting to be police officers as early as between the ages of 4 to 6 years old. “I just remember having a desire to be in law enforcement. I don’t know if it was TV shows or what.”

He says he can’t really attribute those memories to something specific — “I remember having an interest if I saw a patrol car, or an officer working an accident scene. I just remember having a higher interest.”

Wasson and his brother both worked in security forces where they guarded special weapons facilities on the west coast. They both served in a fleet infranty unit in Twentynine Palms California.

The two men take following the twin track to the ultimate, serving together through boot camp, infantry training, security forces training and at their first duty station together. After their first duty station decommissioned, they were eventually separated, with Wasson going to Twentynine Palms, California, and Brent Wasson at Camp Pendelton. At that point, however, they were just 3 1/2 hours apart and Wasson said he traveled often to Camp Pendleton.

He began pursuing a law enforcement career before even leaving the Marines, testing for the California Highway Patrol and the San Diego County Sheriff’s Office, both highly competitive processes, he said. He recalls his name being just one of more than 1,000 applicants.

“I didn’t really want to live out in California, I wanted to come back home. I was doing that more for experience,” he said of applying for those first positions.

He worked for a short-time in construction after leaving the Marines and getting married. He also worked at the Scotts Bluff County Detention Center for about three months before being notified by then-Chief of Police Jim Livingston that he’d qualified and would be offered a position at the Scottsbluff Police Department.

Like many officers, Wasson climbed the ranks in the department, serving as a patrol officer for four years and then as an investigator with the WING drug task force for four years.

As a patrol officer, he said, he remembers liking to work the night shift the most and says he liked “interfering in criminal activity.” He tells a story of spotting a man, walking in black, carrying a black trash can, as he patrolled on 17th Street in the area of Avenue H. He said it’s an example of how he liked how “there are a lot of things that are going on, that you can find, if you are looking and ‘interfere with criminal activity.”

As a young officer, he enjoyed working in investigations.

“I think investigations was always my desire,” Wasson said, thinking back on his early career. “I enjoy interviewing people, and figuring out how things happen.”

His affable personality makes him an easy person to talk to; he jokes that being a son of a used car salesman benefited him , making him good at investigations.

He said, “In law enforcement, we sometimes refer to it (interviewing) as selling the vacuum. You have to be able to communicate with people and, you know, get information out of them that they’re not always wanting to release and give up. I felt I was good at it and saw some success in it.”

He was serving as an investigator with the task force when one of the key cases of his career occurred — the kidnapping and murder of 15-year-old Heather Guerrero. Wasson interviewed Jeffrey Hessler, convicted in the murder of the Star-Herald newspaper carrier. That interview was key to solving Guerrero’s case and the rape of a girl who had been raped while delivering newspapers on Aug. 11, 2002, a crime for which Hessler was also convicted.

He says he was a relatively young officer at the time and because of “where he was at” when a tip came in, “he was in the right place at the right time.” Wasson didn’t know the man, but the man knew that Wasson knew his sister and Hessler opened up. He described it as surreal and says that Hessler had admitted within 5 five minutes and 10 questions that he knew that Hessler was “the guy.”

“There are a lot of cases where it may take a shift to resolve the issue, it may take multiple shifts, but seeing successful resolution, and if there is an arrest, successful prosecution, should be all of our goal.”

He admits that there are cases that still bother him because they are unsolved, such as the Aug. 2, 2011, murder of Ralph Magee. Magee’s body had been found in his apartment and the man had been beaten to death.

Magee, 49, died of a broken neck as a result of blunt force trauma. Officials say the man had been beaten to death, having suffered additional injuries. No one has ever been charged in the crime, despite a reward fund and other efforts.

“I’ve always been baffled by a lack of information about who Ralph Magee would have been spending time with in the last days of his life,” Wasson said. “I think we are missing a name, of a person, that we need to talk to.”

He says that he knows that Magee’s sister, Kathy, is frustrated that the case has not yet been solved and he says he shares that frustration.

“It’s very, very frustrating because you know that it can just take something small to get the ball rolling and see resolution,” he said. “You just don’t know when and where that will happen.”

At the Scottsbluff Police Department, he said, he’s had lots of opportunities that reflecting back, he wouldn’t have had at other departments. His career has also included serving on the SWAT team, both as an officer and then as a leader, for about five years. He served as a sergeant with the department for two years, before being promoted to captain in 2006. He is one of two captains tasked with helping lead the department. As a captain, he has overseen the bomb squad and has specialized training for ordnance disposal and other skills.

“It is definitely a lot more administrative,” he said. He said he jokingly refers to the patrol officers and investigators as “the real cops.” He oversees the supervisors of the different divisions in the department, helping get officers the things they need to do their duties, such as equipment and training.

Law enforcement can be a stressful profession, Wasson admits, but says there are systems within the department, such as the critical stress management, system designed to assist officers. Police officers tend to mask when they are experiencing issues, he said, knowing the importance of their job and how they are held to a higher standard. However, he said, administration and leaders work together to ensure that officers are getting what they need.

“None of these guys are non-human,” he said. “They all have families. They have the same issues as the people that we encounter. The same stressors that are affecting them are affecting us.

He’s had tough moments in his career and other moments when he thinks, “This, this is what I want to do,” he said.

At the Scottsbluff Police Department, he said, all of the officers know each other and know their families, which helps through those stressful moments on the job.

“We work close together, every day,” he said. “We are a close knit family.”

Scottsbluff Police Capt. Brian Wasson talks with Dana Gandy during a National Coffee with a Cop event on Oct. 2, 2019. Gandy, who formerly worked in 9-1-1 dispatching, said he attended coffee with a cop to support local law enforcement and inquire about volunteer opportunities.

A pin with the school photo of Heather Guerrero remains on a board in the office of Capt. Brian Wasson. An interview by Wasson with convicted murderer Jeffrey Hessler solved the kidnapping and murder case.