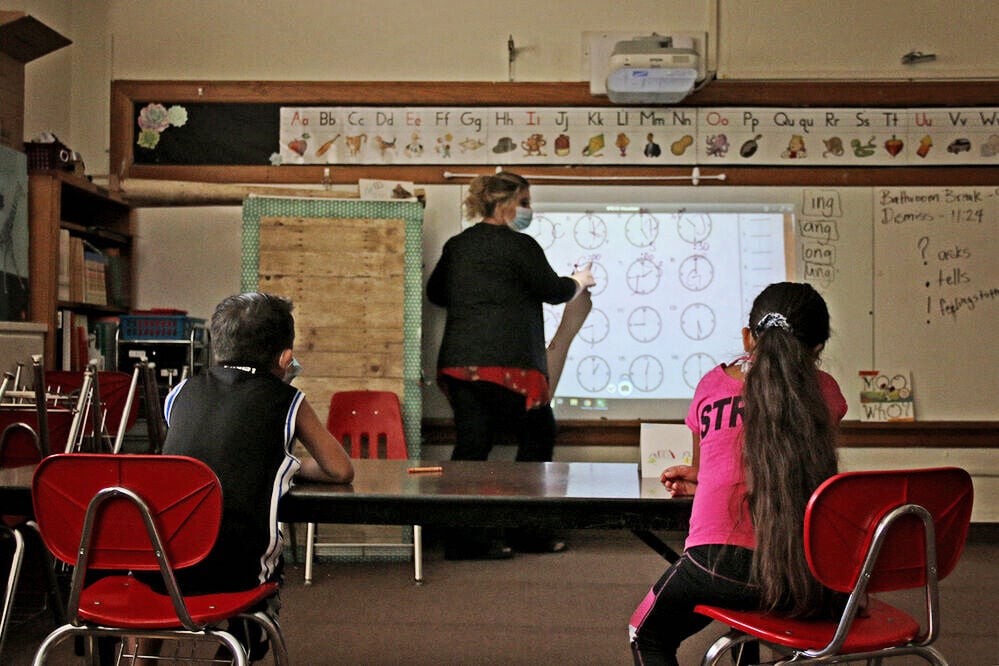 Two of Aleighica Keeran's first-graders on July 16, 2020. Keeran's class was learning how to read analog clocks. 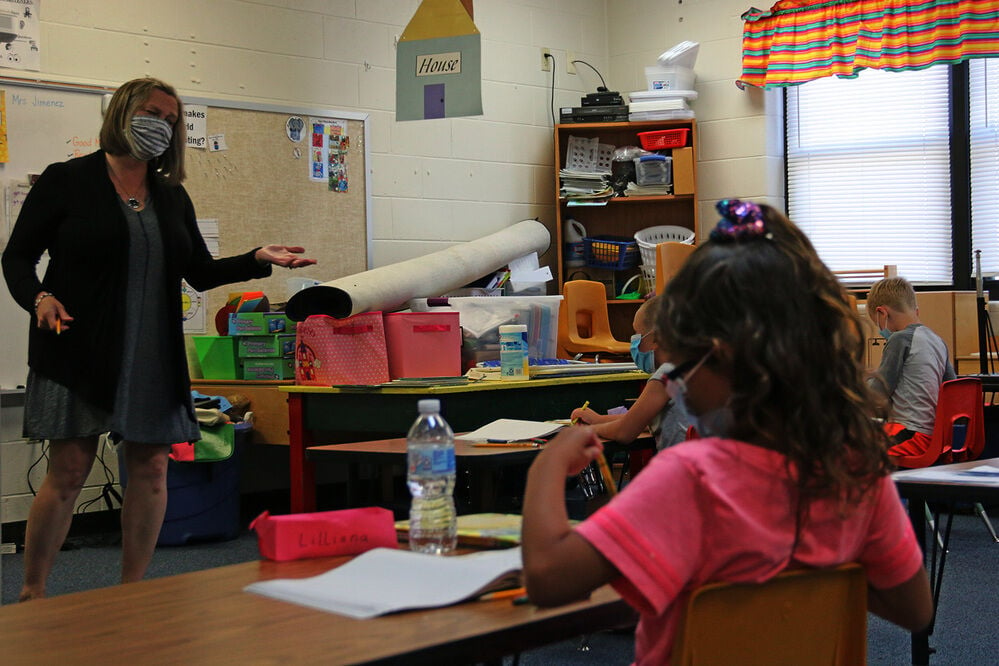 Hellen Jimenez teaching math to a handful of kindergartners on July 16, 2020. 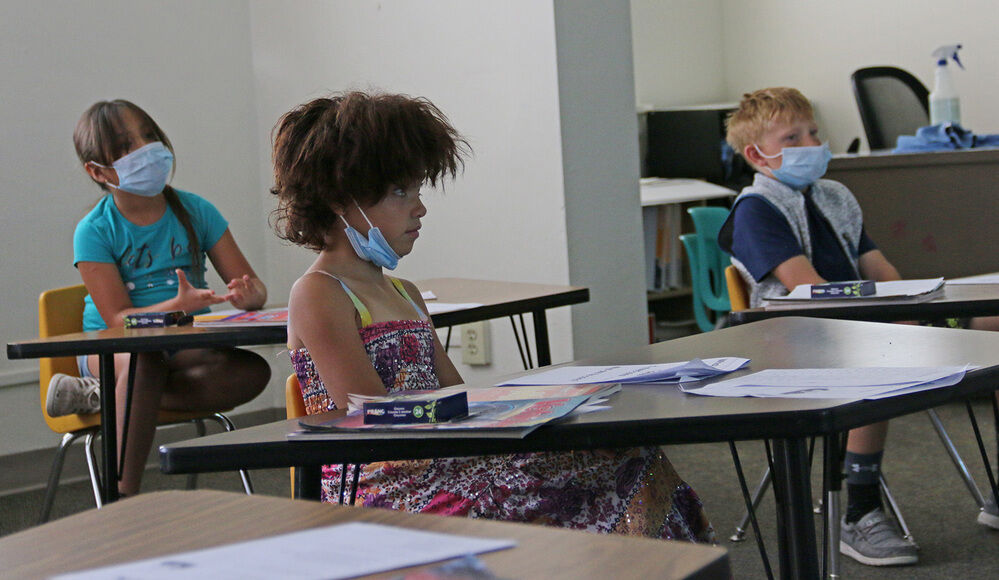 Heather Gonzalez' second-grade class on July 16. The class was learning how to identify different coins. 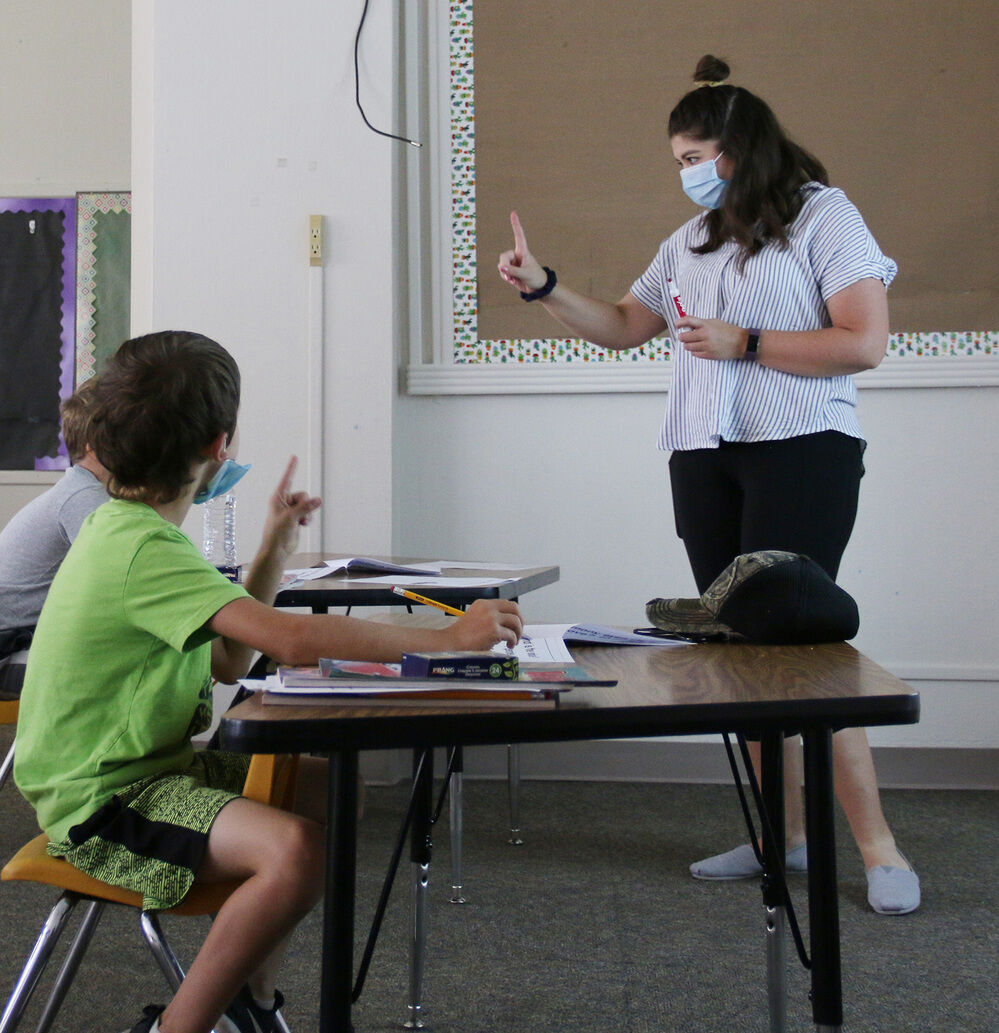 Heather Gonzalez' teaching a group second-graders how to count coins on July 16, 2020 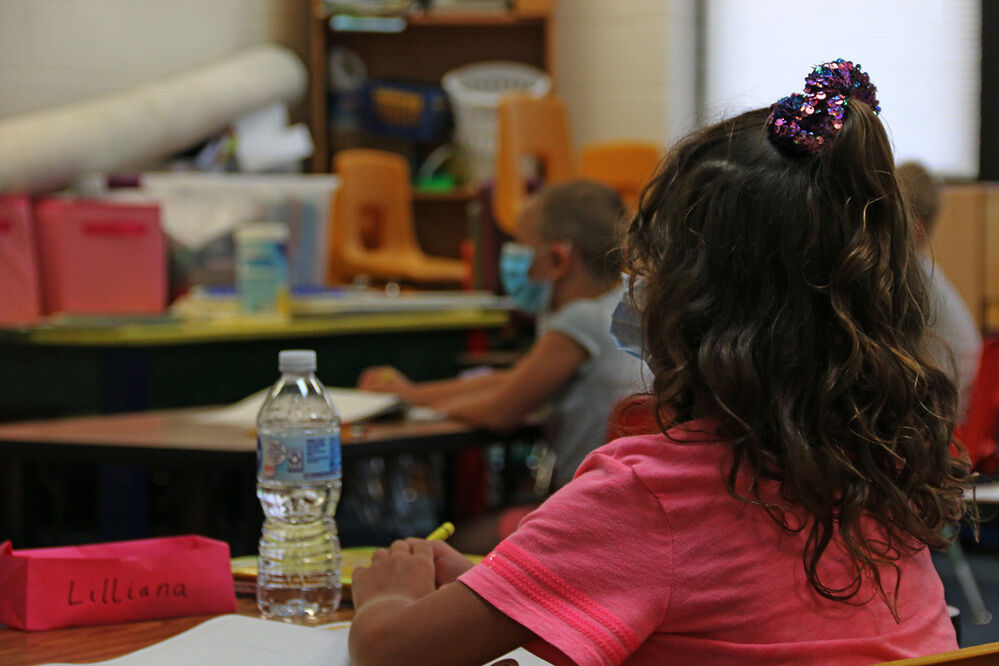 A kindergartner Lilliana listens to her teacher, Hellen Jimenez during a Math lesson on July 16, 2020.

Two of Aleighica Keeran's first-graders on July 16, 2020. Keeran's class was learning how to read analog clocks.

Hellen Jimenez teaching math to a handful of kindergartners on July 16, 2020.

Heather Gonzalez' second-grade class on July 16. The class was learning how to identify different coins.

Heather Gonzalez' teaching a group second-graders how to count coins on July 16, 2020

A kindergartner Lilliana listens to her teacher, Hellen Jimenez during a Math lesson on July 16, 2020.

On Thursday, July 16, Keeran was teaching her class how to read analog clocks. The four students in her class —sitting several feet apart and wearing masks — were a glimpse of what classrooms across the Panhandle and the country might look like in the fall.

Districts across Nebraska have begun releasing plans to reopen in the fall and — so far — all that announced say they’ll be in-person. That action was encouraged by Gov. Pete Ricketts and Nebraska Department of Education Secretary Matthew Blomstedt in a news conference on Friday, July 17.

While Ricketts and Blomstedt stopped short of requiring masks in schools, the students in the Scottsbluff Public Schools summer school program were required to wear masks, according to the program’s principal, Ashlen Schaneman.

Schaneman said that students were allowed to take mask breaks during the day if they felt the protective coverings became uncomfortable.

Staff in the program also used infrared thermometers to check students’ temperatures, as specified in the most recent CDC guidelines. The program is for kindergarten to third-grade students from all of SBPS elementary schools.

Schaneman said many of the students in the program are there to receive additional support and get reacclimated into school. While much of the conversation around restarting in the fall is focused on high school and college, Schaneman said early elementary is one of the most crucial times in a student’s life.

“When you’re looking at early elementary, that’s when they’re really learning how to read, they’re really getting their phonics (and) their decoding skills,” Schaneman said.

Like every school system in Nebraska, SBPS moved away from in-person classes in March as the first round of COVID-19 cases sprouted in the U.S. Schaneman said that transition was difficult for early elementary students because they missed out seeing their teacher’s mouth words, seeing other students work through problems and other aspects of visual learning.

“I hope that, eventually, students are going to get caught up, obviously, that’s our goal,” Schaneman said. “But I know we’re going to see a dip in academics.”

Schaneman said she doesn’t see that challenge as insurmountable. In many ways, the summer school program acts as a test chamber for how reopening might look in the fall. Schaneman said that the process of regular temperature checks took more time than first anticipated.

“I didn’t get to say goodbye to my kiddos, that was the hardest part,” Keeran said. Keeran said her transition from in-person classes to distance learning went well with only a few technician hiccups early on. After the first week, Keeran said her fifth-graders dived back into class using Google Classroom and Nearpod, an online learning platform.

“I made a deal with my kids at the beginning of this year ... if they all gave a hundred percent, they tried their best, I would dye my hair purple,” Keeran said. “Since we did not do state testing, but they did really well with the online learning — I dyed my hair purple for them.”

Going into the fall, SBPS has not announced the specifics of their plan to return to school but Superintendent Rick Myles said classes will return in-person in the fall.

For Keeran, who said she jumped at the opportunity to teach summer school this year, making the classroom a safe place to learn started with a conversation with her class and teacher buy-in.

“They understood completely, there was not a doubt in their mind as to why we were doing it,” Keeran said.

Going into the fall, Keeran said she’ll be taking a closer look at the shared spaces in her classrooms. She said that means limiting shared supplies, giving them time for mask breaks and sanitizing. That, and remembering that the coronavirus pandemic is shared experience.

“We’re all trying to figure it out,” Keeran said.

SBPS classes are set to resume on Aug. 17.

Justin Garcia is a reporter with the Star-Herald. He can be reached at justin.garcia@starherald.com.

Justin Garcia is a reporter with the Star-Herald. He can be reached at justin.garcia@starherald.com.

Jan Brett at the Midwest

Jan Brett at the Midwest