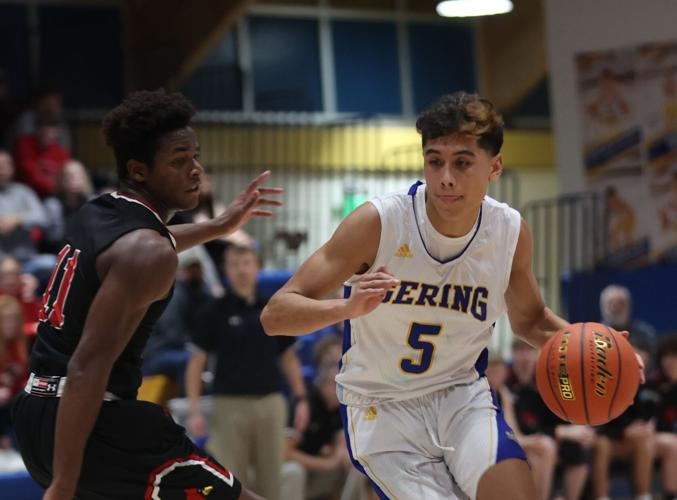 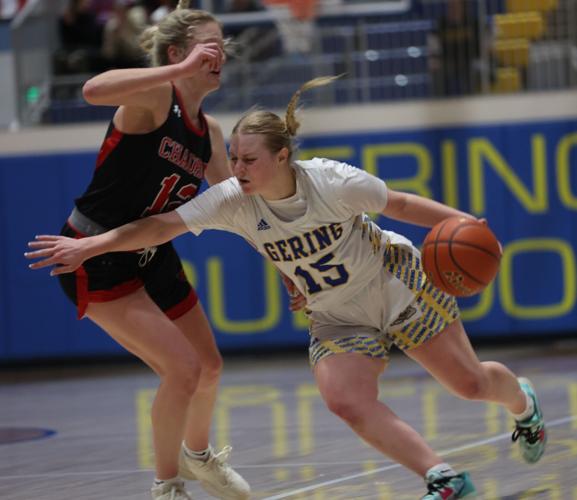 Chadron outscored the Gering girls 14-9 in the second quarter to claim the 50-31 win.

“I think tonight we really put some pressure on them and that is what we really wanted to do,” Winkler said. “We wanted to trap them and wanted players flying all over the place, and defensively I think we did that. Offensively we got different guys scoring. We attacked the basket. We ran some plays that we practiced that got us some baskets. I think all around offensively and defensively, we had a pretty complete game for the most part.”

Gering led 17-13 after the first quarter only to watch Chadron come back to take a 20-17 lead early in the second quarter on four points from Xander Provance and lead 22-15 after a bucket by Bradd Collins.

It was from that point on that the Bulldogs went on a 14-0 run that spanned nearly four minutes.

Winkler said that run was crucial in the Bulldogs’ win Friday night.

“That was what we have been looking for in practice this week is to be able to finish things and get on a roll and get a basket after a basket,” he said. “Before we would get on a little bit of a mini roll and then we would have something lack in defense or miss some easy shots and we are not up or barely up. This one was got basket after basket and kept attacking. The defensive pressure was a part of that.”

Gering’s 14-0 run was highlight by a big 3-pointer by Jackson Howard and clutch buckets by a handful of players.

Gering led 32-22 before Chadron stopped the run on a Brady Daniels bucket with 2 minutes to play in the half. Gering led at halftime 36-28.

The third quarter saw Chadron make a run midway through as they sliced the Gering lead to five, 41-36. Gering answered back with three straight 3-pointers from Howard, Uriah Ybarra, and Max Greeley to go up 50-37 and led 52-39 after three periods.

The fourth quarter was a back-and-foruth quarter as Chadron outscored Gering 15-13.

Winkler said that was nice to have everyone step up and score, especially from beyond the arc.

“That is a key that we wanted to get to where we are having one or two, we want to get three or four guys able to score. We have guys that are able to shoot and we wanted to get three or four of them that could put the ball in the basket at anytime and that makes it tough on the defense,” Winkler said. “I think tonight we did that and I am hoping that continues going forward.”

Gering was led by Ybarra with 20 points followed by Greeley with 17, Howard with 11, and Jacob Van Anne with 10. The girls game was a different story as Chadron led from start to finish in the contest.

“We have been having some really good five to six practices and I think we came out and played a pretty decent game of basketball,” he said.

Land said this wasn’t a good game for his team.

“I don’t think we brought near the effort that we needed to,” he said. “We substituted early because we had some foul trouble. The kids that came in had a few different positions to play. We gave up some points against the press that really hurt us before halftime. They (Chadron) just kept mixing up defenses. That flat 32 zone that they were running we just had a hard time getting anything. When you don’t hit outside jumpers against it, which we didn’t hit a whole lot, it will be a long night and it was.”

Chadron grabbed 14-8 lead on a 3-pointer by Sophia Wess, but Gering came back on buckets by Gabby Moreno and Nickie Todd to cut the deficit to 14-12. Chadron came back and went on a 9-0 run to lead 23-12 before Neveah Hrasky hit a halfcourt shot at the buzzer to give Chadron a 23-15 halftime lead.

“We were trying something new with the zone and I think that slowed Gering down a little bit and gave us some opportunities and we went on a long scoring streak and made some baskets,” he said. “We have a history this year of defending pretty well but also having a hard time scoring. So, getting some points in that nice little run gave the girls a big boost before halftime.”

Gering got to within eight points at 40-32 in the fourth quarter, but a bucket by Pinnt and then big buckets by Ferguson and Haylee Wild pushed the lead to 47-24.

Gering tried coming back as they went on a 7-0 run that was highlighted by a Kelsey Brady trey, but it wasn’t enough.

Chadron was led in scoring by Ferguson with 13 points followed by Pinnt with nine and six each from Wess and Makinley Fuller.

Gering was led in scoring by Makenzie Todd with nine points followed by six from Hrasky and five each from Brady and Carleigh Pszanka.

Going forward for the Gering teams is a home game against cross-town rivals Scottsbluff on Saturday.

“We will have to play great defense is the key. They are very athletic all the way around,” he said. “We will have to focus on our defense and make sure we get that taken care of. Then we just need to hit more shots than they hit.”

Land said his team has to put this game out of their mind and just come back and play harder Saturday night.

“That is what we told our girls afterwards is to have a short memory, let’s not worry about this game because it is over with and we can’t control anything at this point,” Land said. “We just need to turn all our energy into Scottsbluff tomorrow night.”

A University of Michigan gastroenterology researcher is no longer employed by the university following the retraction of five academic papers in scholarly journals due to what one academic journal called the "falsification" and "fabrication" of data involving millions of federal research dollars.

Earth's inner core may have stopped turning and could go into reverse, study suggests

Scientists are weighing in on what it might mean.

Fireball Cinnamon has been sued over “purposefully misleading packaging,” according to reports.

Nebraska teacher accused of having sexual relationship with student

Authorities arrested Cali Heikes, 25, of Winside, on Sunday. No charges were filed by Wednesday.

Stacie Beutler, 46, was shot multiple times and was pronounced dead at the scene. Bart Beutler, 47, was arrested on suspicion of first-degree murder, police said.

One killed, four hospitalized after crash in Saunders County

One person was killed and four remain hospitalized after a crash Wednesday night in Saunders County.

Two longtime members of Nebraska football’s medical and training staff are no longer with the program.

Owen Palm, president and CEO of 21st Century Holdings, received the Scottsbluff/Gering United Chamber of Commerce’s most prestigious award, the Trail Blazer of the Year Award, during Wednesday's annual banquet.

"It's your hopes and dreams coming true, but it's your worst fears," Donna said. "Somebody is going to go home a loser, and neither one of them lose very well."