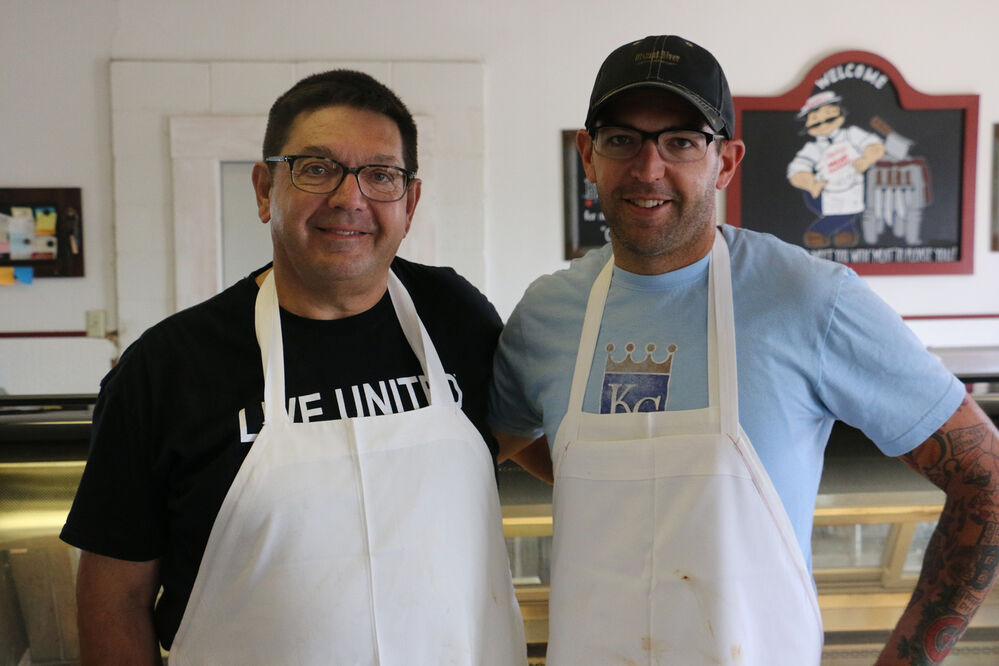 Mark (left) and Brody Gies are co-owners of Marky's Meat Market in Gering. The store specializes in a variety of garlic sausages and steaks. 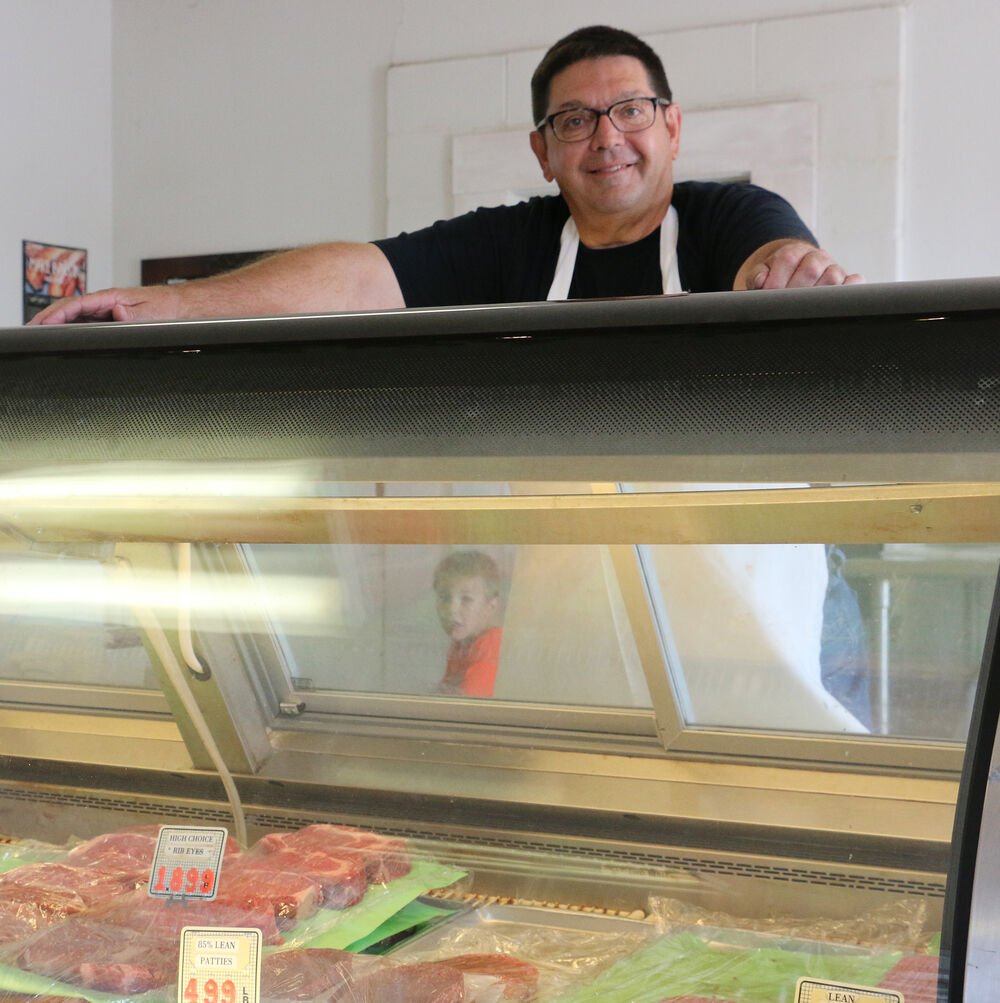 Mark Geis has been in the meat cutting business for 45 years. Grandson Crosley was spending the day at the family business, Marky's Meat Market in Gering. 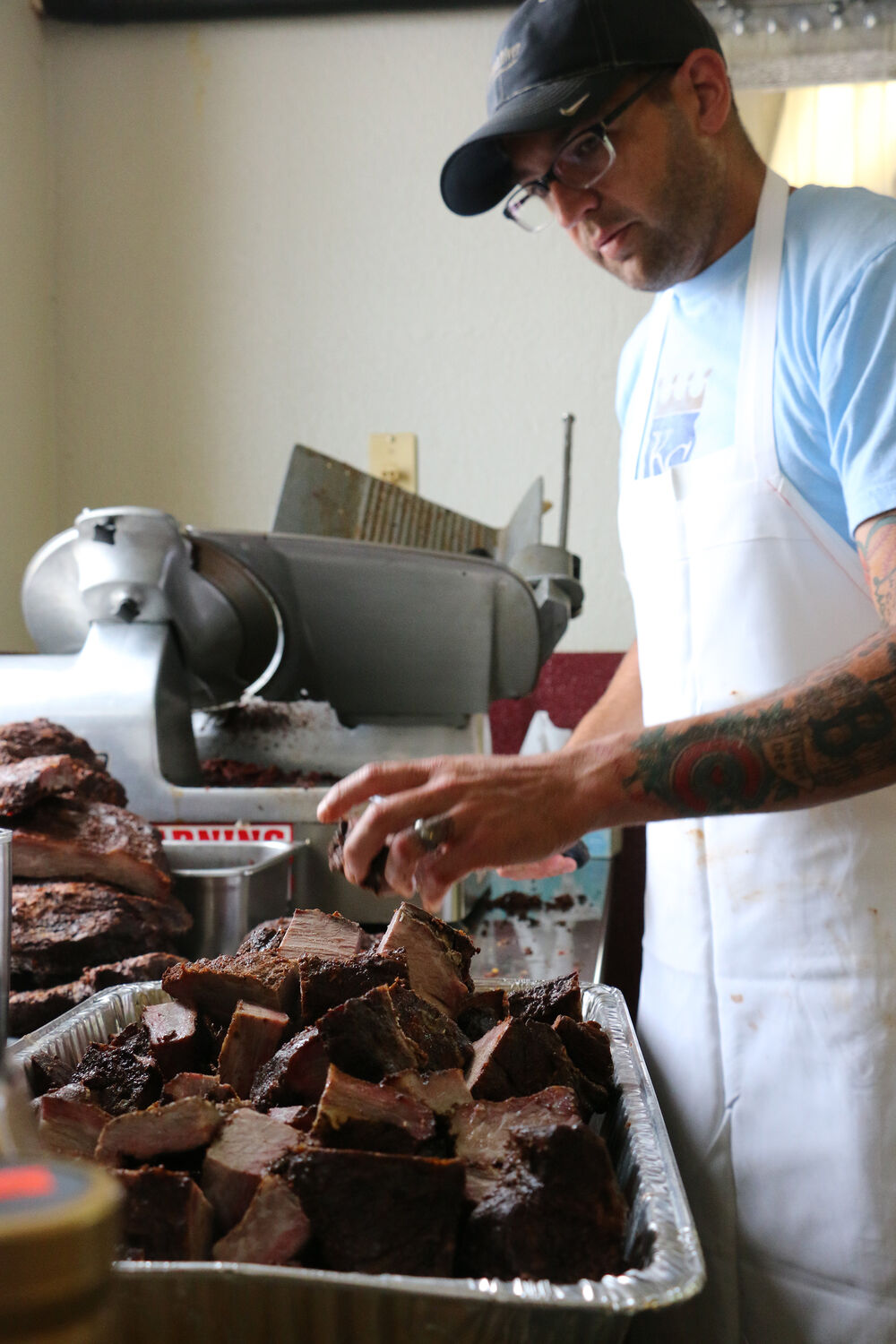 Brody Gies slices some brisket at Marky's Meat Market in Gering. Brody joined his dad, Mark, in the family business in 2002. The shop specializes in garlic sausages and a variety of other meats. 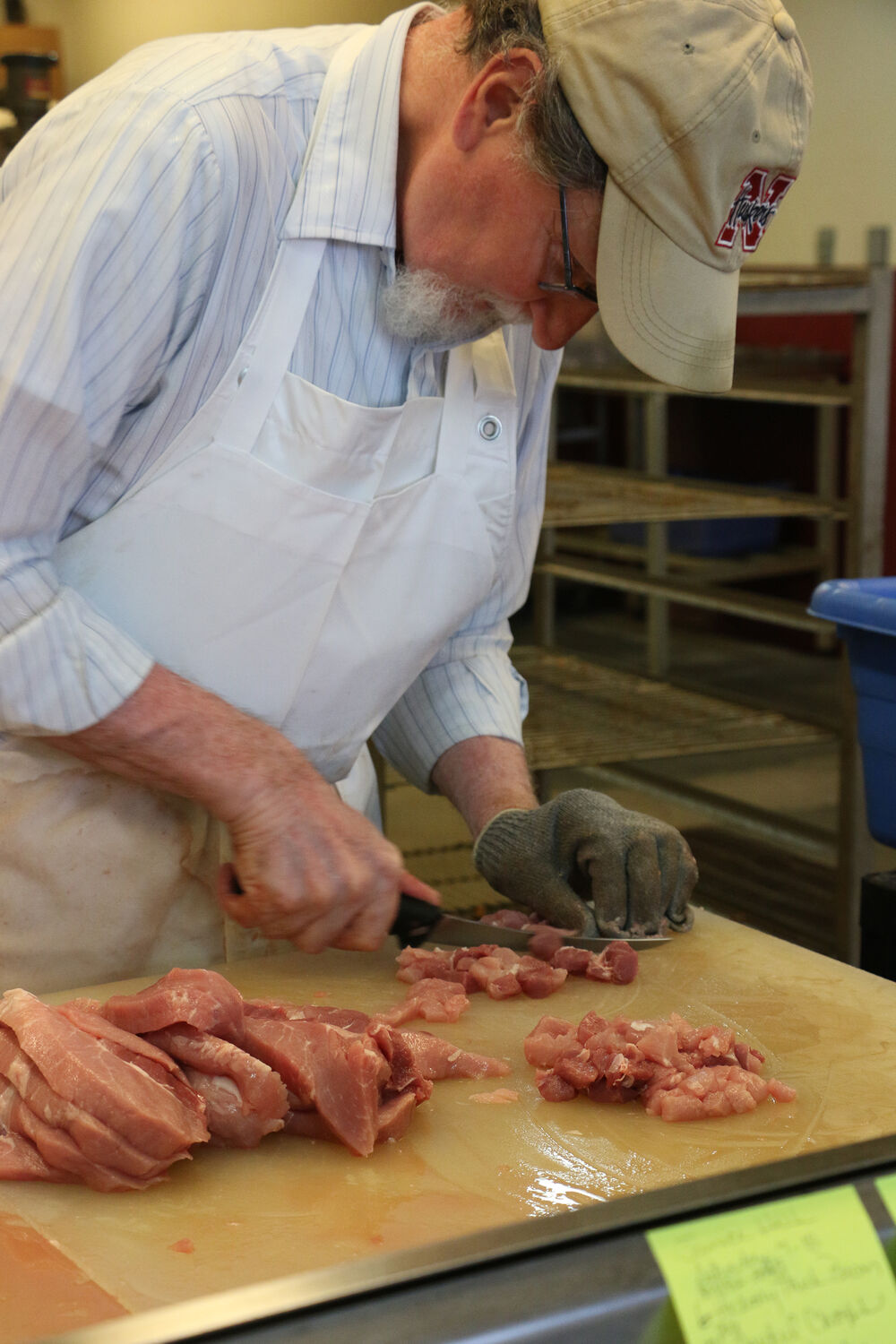 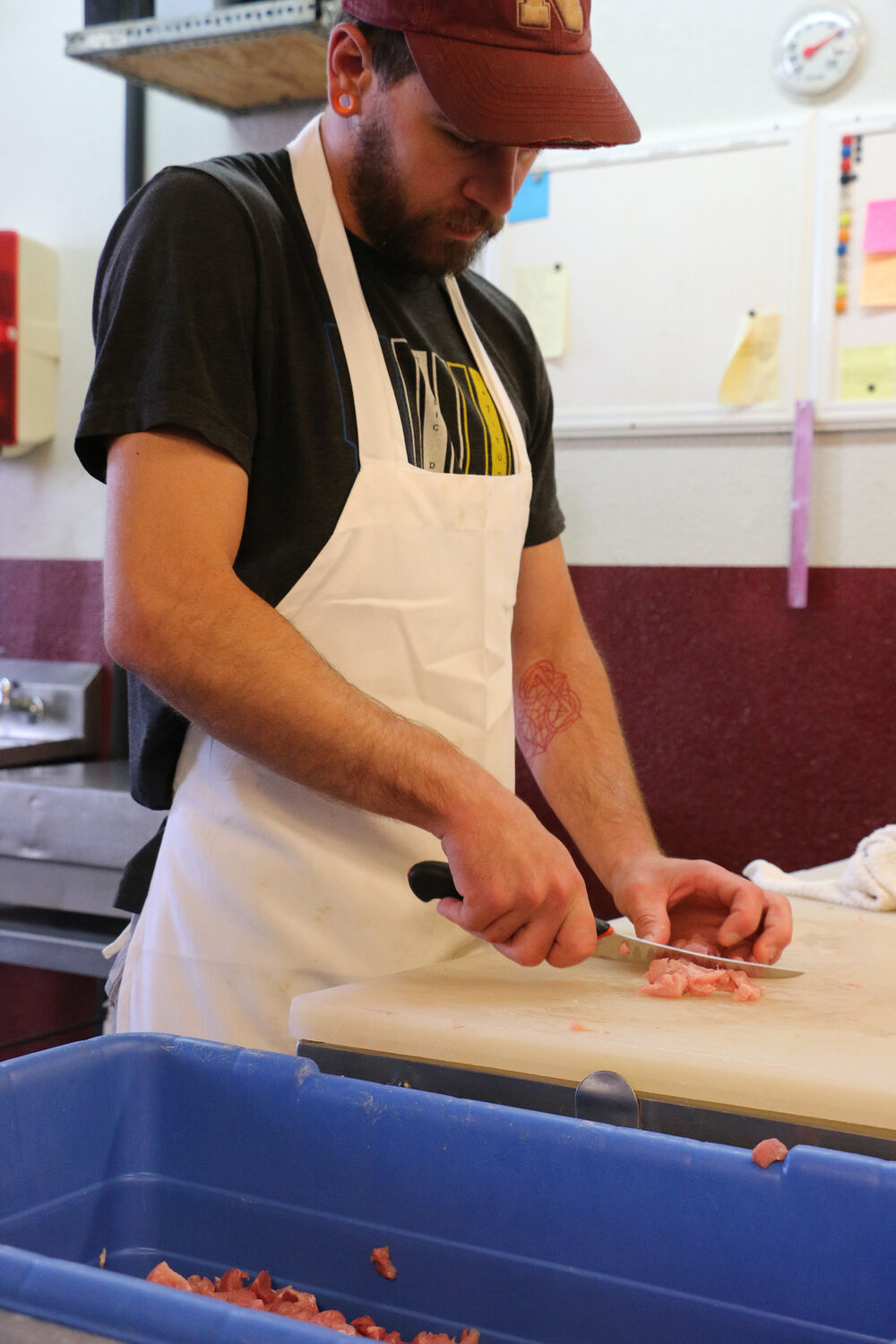 Nate Richter is one of the meat cutters at Marky's Meat Market in Gering.

Mark (left) and Brody Gies are co-owners of Marky's Meat Market in Gering. The store specializes in a variety of garlic sausages and steaks.

Mark Geis has been in the meat cutting business for 45 years. Grandson Crosley was spending the day at the family business, Marky's Meat Market in Gering.

Brody Gies slices some brisket at Marky's Meat Market in Gering. Brody joined his dad, Mark, in the family business in 2002. The shop specializes in garlic sausages and a variety of other meats.

Nate Richter is one of the meat cutters at Marky's Meat Market in Gering.

Starting with a recipe for fresh garlic sausage, Marky’s Meat Market has grown over the years to offer a wide variety of meat products produced in house.

Mark Gies has been cutting meat for 45 years, starting as an apprentice at Safeway right out of high school. His son, Brody, is now co-owner of the shop, having joined the business in 2003.

In 1986, Mark bought Twin City Pack from John Hoffman, and his adventure in business for himself began with experimentation on the perfect garlic sausage recipe.

Brody has added an experimental aspect to a business that now offers 30 different varieties of sausage out of the location that opened in 2005. One of the best sellers is the loaded steak brat with bell peppers, mushrooms, onions, pepper jack cheese and cheddar cheese all inside.

The breakfast brat got started as a result of a golf trip with some buddies. Brody volunteered to make breakfast burritos.

“I mixed up some of our breakfast sausage and put some bacon in it, some jalapeños, some cheese and came up with this ground sausage that everybody loved,” he said. “So, we stuffed it into a casing and made it a brat, and now it’s one of our biggest sellers. I just like putting some of the random stuff in that people don’t normally think of putting into a brat.

“Mine are just kind of bizarre sausages. Think of flavors that might go together, put them in a sausage and see if it turns out good. And we have had a lot of not good ones turn out, too.”

Customers asking for a chicken brat led the team to put together three different recipes. One, Mark said, was a keeper. One was so-so and the third was trashed completely.

Coming up with a quality product and a quality cut of meat is what drives Mark and Brody.

“Being a specialty meat shop, we have to have something that draws customers to us compared to grocery stores,” Mark said. “If I won’t eat what’s in my counter, it doesn’t go in there. I’m very particular on making sure there’s no gristle and stuff like that. If we have to charge a little bit more because there’s not going to be a piece of gristle on it, that’s always been my philosophy on the way to go. I think we’ve built our reputation on that. To be able to be in business 34 years, there’s truth to it.”

Brody said it’s been interesting to see the perception of Marky’s change over the years, especially over the past few months as more people were cooking for themselves during the coronavirus pandemic. The pandemic has brought new customers to the business looking for variety.

“Somewhere when we opened up, we got labeled as being the expensive meat market,” Brody said. “Now that we’ve had this new wave of people come in here, I’ve heard numerous times, ‘I’ve heard that you guys were expensive, but this is the same prices as the grocery store.’ Then they come back and they love it, and now they’re regular customers. That’s so rewarding.”

When Brody and his older brother, Josh, were growing up, Mark passed along his love for baseball. Mark, who had offers to play collegiately at Chadron State and Kearney State Colleges, coached both of his sons and took them often to Kansas City Royals games. Today, Brody has added a catering branch of the business called Ballpark Barbecue for special events.

Mark and Brody spend their days together, talking about anything and everything, and even leave the shop early on Tuesdays to play golf together. Brody said he knows that one day Mark will retire, but doesn’t see him completely stepping away.

“I’ll miss it in a few years when he’s out of here, but I tell people I don’t ever think he’ll be ‘out of here,’” Brody said. “He’ll still be down here. He does deliveries every morning to our restaurants, and I don’t think that’s something he’ll ever want to give up. He enjoys that, so I can see him being down here every day until 10 o’clock so he can do deliveries and talk to our restaurant accounts.”

With such a wide variety of in-house products to choose from, Brody said it’s difficult to pick a favorite.

“We’ve eaten all of it for so long. I can’t say that there’s really a favorite,” he said. “It just comes down to, ‘Hey, this sounds pretty good. I haven’t had this in a while.’ I can’t say we make anything bad by any means, so it’s good to try everything now and then, but once in a while you’ve got to take a break from some of it. Sometimes I just need some chicken.”

Steaks, brats, sausage rings, so many choices to grill.

“You can’t go wrong with a steak,” Brody said. “No matter which one you take home and grill, it’s going to be good. Everybody loves steak, right?

“I love this time of year. The garden’s starting to get ready. Garlic sausage and corn on the cob and fresh tomatoes, perfect meal.”