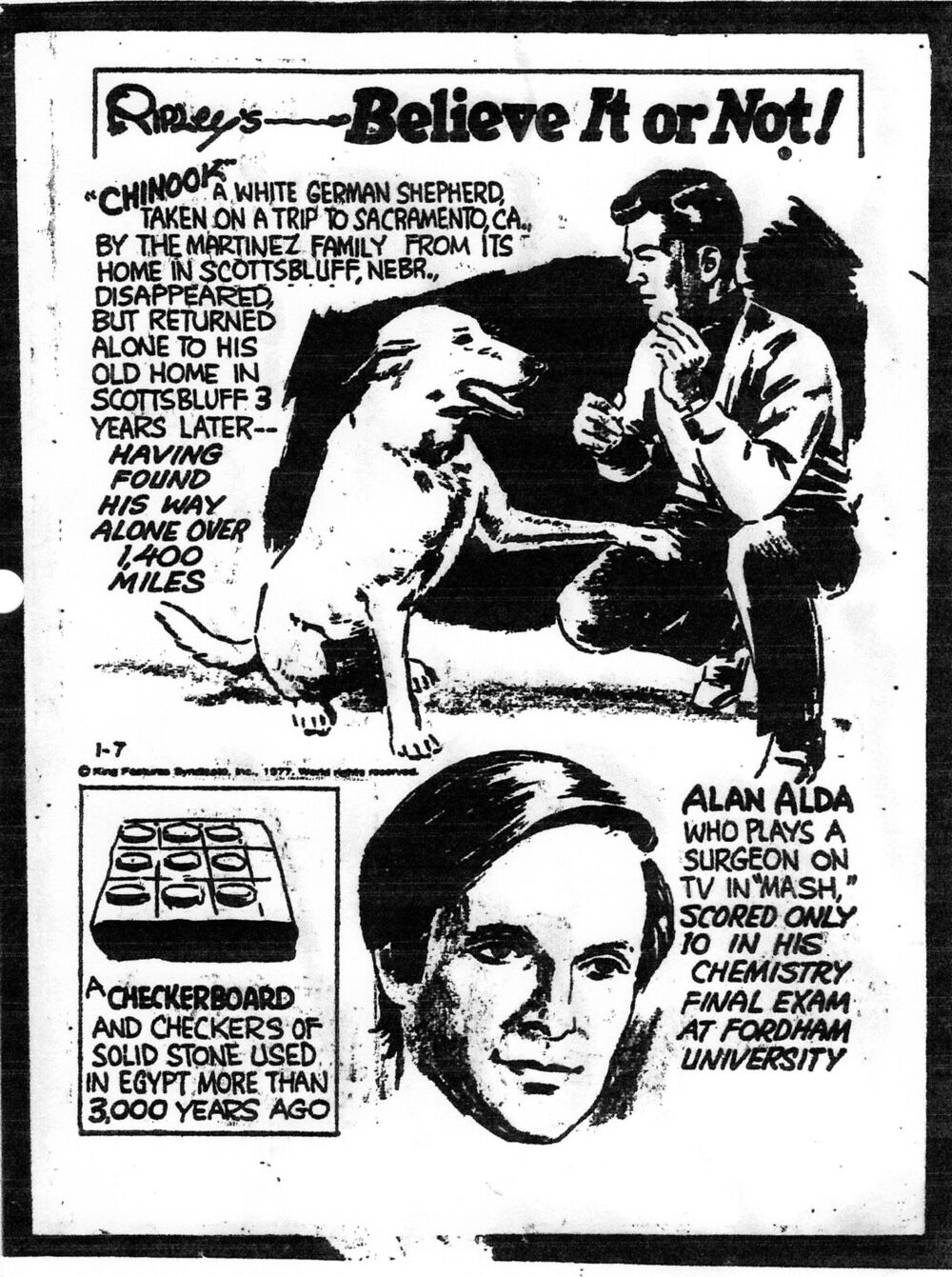 Chinook's long trek made all kinds of headlines and news, including in"Ripley's Believe It or Not!" Martinez said the story had even made it around the world, having received a letter from a man in Australia regarding Chinook's story. 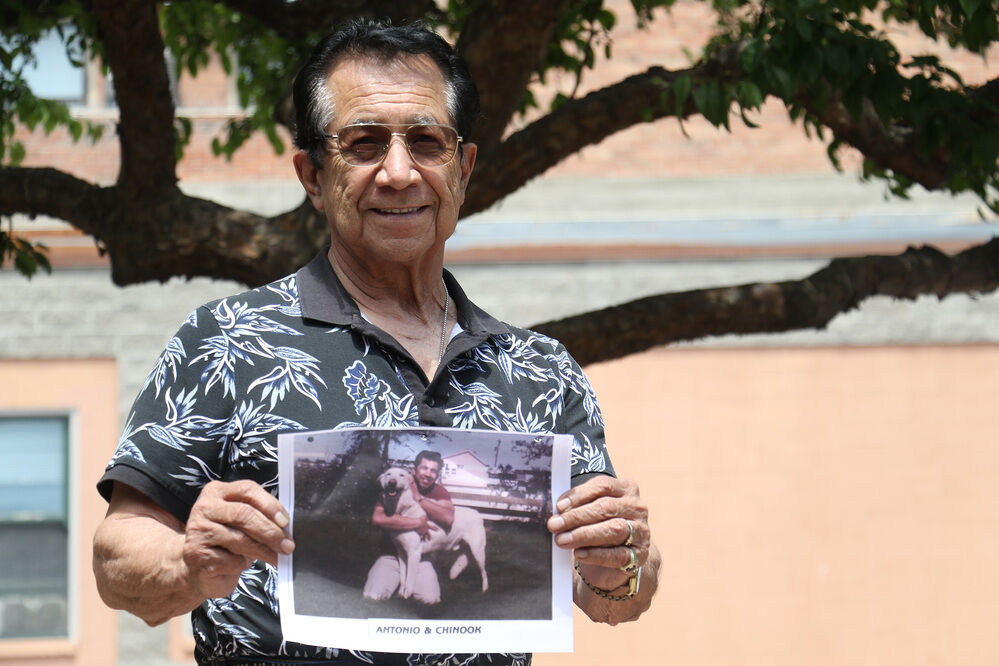 Antonio Martinez holds a photo of him and Chinook when his dog returned to his home in Scottsbluff three years after making the 1,400-mile trek from Sacramento, California, to Scottsbluff, Nebraska. Antonio said he's never had a connection with another dog like the one he had with Chinook.

Three years earlier in Sacramento, California, seven of the 11 members of the Martinez family were staying at a hotel as they tried to figure out their next steps after leaving Scottsbluff and heading west. They took their white German shepherd named Chinook with them.

While Chinook was a family dog, one Martinez brother, Antonio, had the deepest connection with him. He spent three of his teen years taking care of, playing with and raising the dog, oftentimes alongside his brother Rick.

“He also liked Chinook. And it was, it was he and I who played with Chinook all the time. So it was the three of us always together,” he said. "But for me, it was a personal thing with Chinook. He was my dog from my heart. He was a family dog from the soul also, as well for everybody else. But for me, I accepted that with me, he was my friend and he was — he was Chinook, the white German shepherd. And the one dog that I (will) love 'til the day I die.”

That’s why, when Chinook strayed from his walk with Antonio’s sister in Sacramento that fateful night, Antonio was devastated.

“We advertise, we call the media, we went back and forth checking,” he said. “Nothing of the dog. Nobody heard anything. Nobody knew anything.”

After much searching, the Martinez family finally felt like they had to accept that Chinook was gone for good. The seven family members ended up staying in Sacramento, keeping a sliver of hope in the backs of their minds that they’d get a phone call from someone someday saying they found a white German shepherd.

Of course, they were expecting the phone call from someone in Sacramento or the surrounding areas — not from someone over 1,400 miles away.

Three years later, Calvin Freouf of Scottsbluff called Ben Martinez, one of the family members who stayed behind but lived at a different house in Scottsbluff. Freouf was a neighbor to the Martinez family before they left the house, and he was the one who discovered the white German shepherd sniffing around the old Martinez home in March 1964.

Ben headed over right away. When he arrived, he called, “Chinook!” and the dog came bounding over to him. He responded to his name and to several commands given by Ben. He even seemed to recognize Ben’s son, Ben Jr., who was only two years old when Chinook left Scottsbluff for Sacramento.

Somehow, someway, Chinook managed to trek halfway across the country through desert, mountains and more to come back home.

When the rest of the Martinez family who had been on the initial California trip got the news that Chinook was back, they couldn’t believe it. Antonio, who had since moved to Milwaukee, Wisconsin, for the military and was now working at a brokerage firm, jumped on the next flight out to see his long-lost pup.

“To this day, we wonder what really brought him back with all those miles. (It) could have been because of the family members — some were missing, only seven of us were there. And maybe he missed mom, maybe he wanted to be more comfortable,” he said nearly 60 years later. “But going through mountains and rivers and wild animals, no food, no water and people picking him up and not knowing whether he would live or die. I don’t know how he did it.”

Antonio told the Star-Herald that as soon as he saw his dog, he hugged him like he’d never let go again. But he would have to eventually. Chinook’s journey told Antonio that he belonged in Scottsbluff, so Chinook lived out the rest of his days with Ben’s family.

Chinook’s journey received national and international media attention, including numerous magazines and newspapers, a publication from "Ripley’s Believe It or Not!" and a 2013 book called “Four-Legged Miracles” by Brad Steiger and Sherry Hansen Steiger.

Eight years later on the day after Christmas, Ben Jr. found Chinook dead next to a pond not far from their house. He had been in bad health and wandered from home not long before, most likely to die, the family thought.

“He says, ‘I’m going to do it for you. I have a granite stone four feet, 1,800 pounds or whatever … in the warehouse sitting there that had a mistake, and it should go to somebody because I can erase all of that printing and put new letters and whatever kind of epitaph you might want,’” Antonio recalled. “‘Tell Tony to give me what he wants on there.’”

After Antonio sent him the words for the memorial, he shipped it to Scottsbluff.

“His generosity was so amazing that he offered to deliver it from Milwaukee to Scottsbluff whether it came by train, plane or truck, but he did it,” Antonio said. “He says, ‘I’m going to do that for you because I love dogs, and I love this story.’”

The memorial still stands at the southeast corner of the Panhandle Humane Society at 126 S. Beltline Highway West to this day.

Antonio, along with his son Ricardo, recently visited the memorial to this special dog.

Antonio said he’s had other dogs since Chinook, most of them also being white German shepherds, but none of them came close to the same bond he had with his childhood best friend.

When asked if he ever had a similar connection to another dog as he had with Chinook, Antonio said, “Never.”

“I just (felt) the closest to him that I felt in my heart,” he said. “… He was loving. He was that dog that you just wanted to hug all the time, because you think he’s a protector. All of those things go with you.

Despite a rough start, 2-year-old River Corbit won’t let life knock him down

Two-and-a-half-year-old River Corbit of Gering loves to play with his two older sisters, whether that is jumping on the trampoline, building p…

A Morrill man is accused of raping and assaulting a 22-year-old woman.

Chinook's long trek made all kinds of headlines and news, including in"Ripley's Believe It or Not!" Martinez said the story had even made it around the world, having received a letter from a man in Australia regarding Chinook's story.

Antonio Martinez holds a photo of him and Chinook when his dog returned to his home in Scottsbluff three years after making the 1,400-mile trek from Sacramento, California, to Scottsbluff, Nebraska. Antonio said he's never had a connection with another dog like the one he had with Chinook.