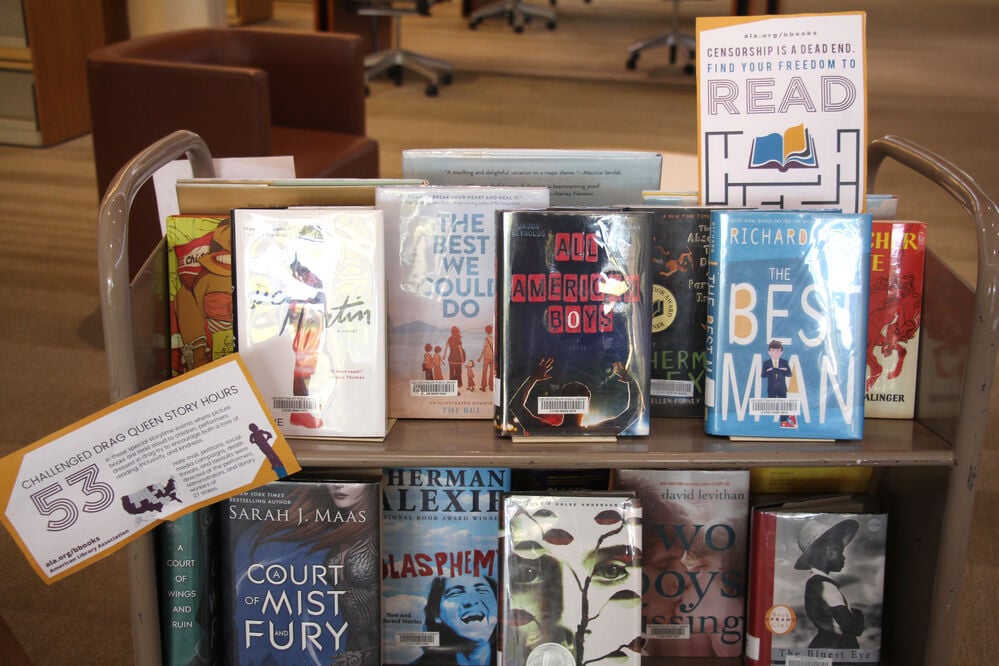 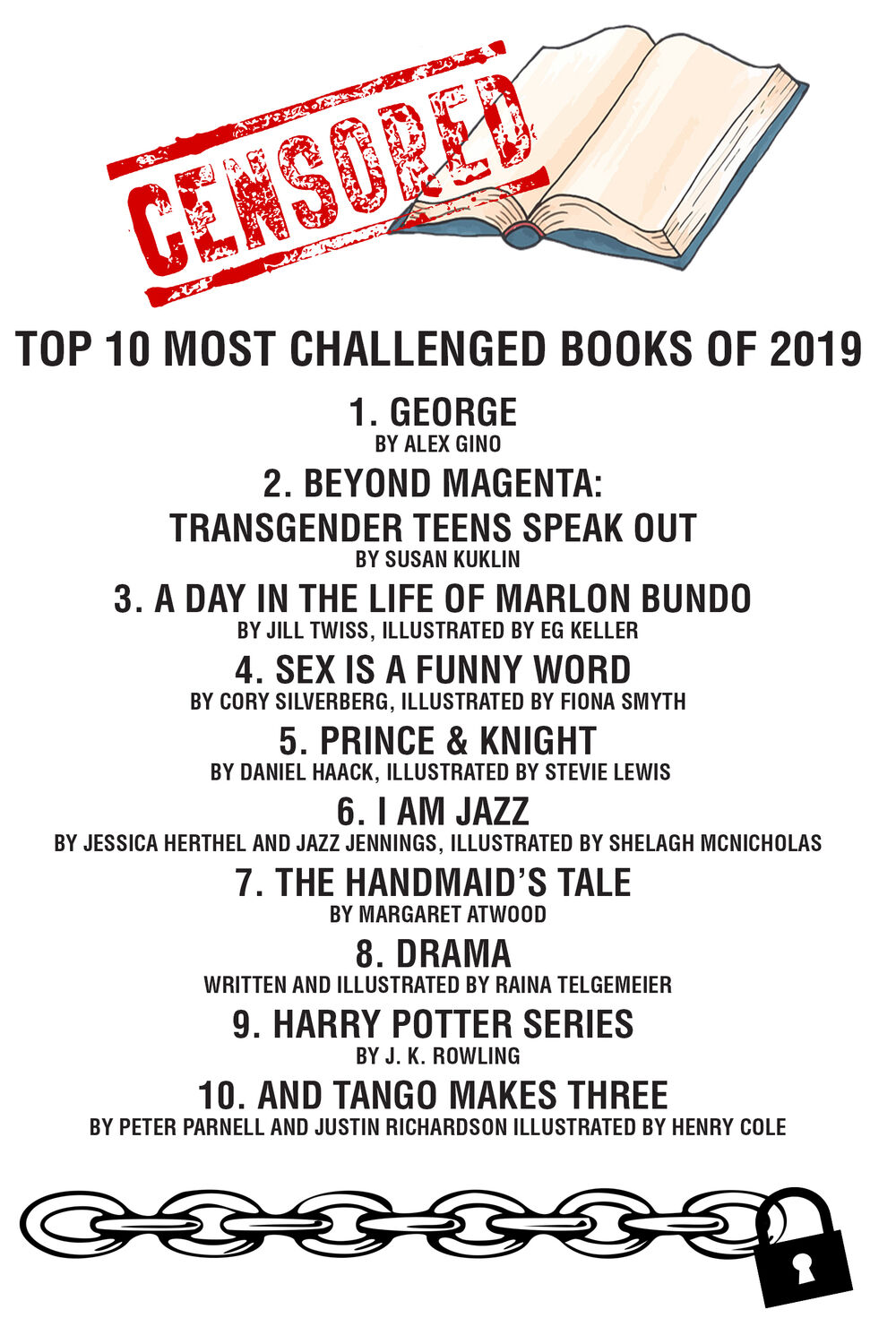 These are the top 10 most challenged books in 2019, according to the American Library Association. Eight of the 10 of them were challenged based on reasons relating to LGBTQ+ content.

ALA published its list of top 100 most challenged books of the decade earlier this week in honor of Banned Books Week, which is a an annual observance spotlighting censorship and informing the public about their intellectual freedom, according to Deborah Caldwell Stone, director of the ALA Office for Intellectual Freedom.

“The freedom to read is truly the foundation for our rights as citizens of the United States,” she said.

Beginning in 1982 with a banned book display at an American Booksellers Association event, Banned Books Week has been celebrated annually in libraries across the country, usually taking place at the end of September and beginning of October. This year’s Banned Book Week was Sept. 27 to Oct. 3.

Area libraries took time to honor Banned Books Week and explained why it is important to remember that everyone deserves the right to read what they want to read.

The Lied Scottsbluff Public Library has a display at the front of the building where you can check out books from the banned books list. The Goshen County Library has been posting on social media ALA’s list of banned, or challenged, books and even providing recommendations for what banned books people should read.

“We’re giving people a broader picture of literature,” Goshen County library director Christine Braddy said. “Sometimes people stick within their own preferred genre, but reading broadly and outside that is one of the ways to develop empathy. Books are great way for doing that, and banned books are even better because they can go further outside your lived experience.”

Gering librarian Sherry Preston said that while the United States government does not ban books any more, there are still plenty of books that are challenged, typically within school systems. She said it’s often because the books have content that makes parents feel uncomfortable.

“If people are uncomfortable talking about it, kids are going to have a hard time learning about it,” she said. “If we get all those books out of the libraries, people don’t understand themselves. I think people need to see themselves in literature.”

Caldwell Stone said the top ten banned books of 2019 show a trend: almost all the books on the list are intended for young people. She said that it shows there is an effort to remove specific material out of young people’s hands.

Preston, who has read 37 of the 100 books on ALA’s 2010-2019 top banned books list, said she believes young people are one of the main audiences who need to read many of the books that have been challenged over the years.

“I think teenagers especially are the ones who need to read some of this stuff,” she said, adding that they can help show “the fact that you are not the only person that’s maybe gone through something like this even though everybody else seems like they’ve got it all together. I think that’s really important.”

“(Young adults) are dealing with developing their identities, exploring their issues, finding information on the experience of a friend or relative,” Caldwell Stone added. “It’s important for these books to be on a shelf in the library.”

Braddy is not far behind Preston, having read a quarter of the decade list of banned books. She said she thinks it’s actually fun to read books that are found on the list and are outside your comfort zone. She said that’s really the role of the library.

“We want to open up to a world of ideas,” she said. “I believe that is how we build empathy in ourselves and start to see how other people view the world.”

Goshen County Library, Gering Public Library and Lied Scottsbluff Public Library all have forms for community members to fill out if they have concerns about a book or other media in the library, but librarians at each local library remind the public that their job is to provide everyone access to all kinds of information and content. It is not their job to tell people what they can and can’t read.

To emphasize the role of a public library in the community, Lied Scottsbluff Public Library technical services librarian Roberta Boyd puts a quote from Jo Goodwin at the bottom of every email she sends: “A truly great library contains something in it to offend everyone.”

“The thing about a public library, we need to have materials for everyone,” children’s librarian Deb Carlson said. “So the big joke is what Roberta has at the bottom of her email. It’s so true … It’s just saying that if we are going to serve everyone, then some people are going to like certain things and others won’t like that.

“Libraries are in the business of having things for everyone and not censoring. That’s what we are.”

The Scottsbluff Walmart has confirmed a temporary closure of its store at 3322 Ave. I.

Spread is not happening at school, but community transmission is seriously affecting Gering Public Schools’ ability to function, according to …

Scottsbluff Police cited a Gering man on charges of fleeing the scene of an injury accident Friday.

The Nebraska State Patrol is investigating and a grand jury will review after a 54-year-old Scottsbluff man died at the Scotts Bluff County Detention Center Thursday.

Hospitals to EMTs affected as cases continue to climb

A statewide campaign will urge Nebraskans to “Do Right, Right Now” in taking proper precautions to prevent the spread of COVID-19, including i…

These are the top 10 most challenged books in 2019, according to the American Library Association. Eight of the 10 of them were challenged based on reasons relating to LGBTQ+ content.