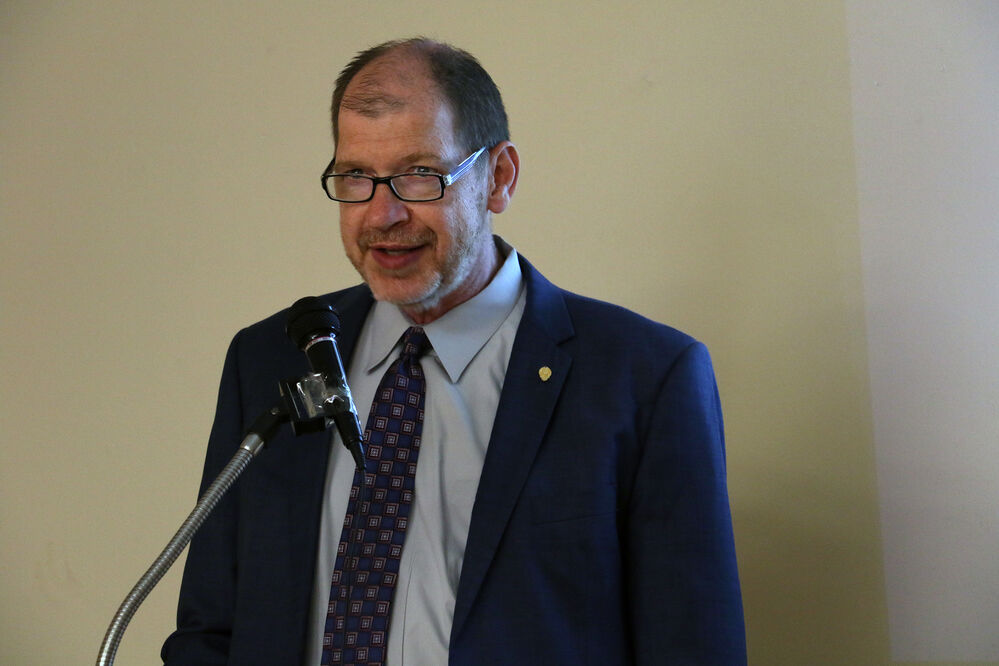 James Kimble, professor at Seton University and originally from Norfolk, Nebraska, gave a presentation on Monday, June 28, at Legacy of the Plains Museum on his book "Prairie Forge: The Extraordinary Story of the Nebraska Scrap Metal Drive of World War II,” which was selected for the 2021 One Book One Nebraska statewide reading program. Kimble claimed World War II would have been lost or taken much longer had it not been for Nebraska's efforts.

Kimble's "Prairie Forge" was selected as this year's One Book One Nebraska.

Hardly anyone would assume that without Nebraska the Allied Forces wouldn’t have won World War II. However, that is exactly what author and scholar James Kimble argues in his book “Prairie Forge: The Extraordinary Story of the Nebraska Scrap Metal Drive of World War II,” which was selected for the 2021 One Book One Nebraska statewide reading program.

Kimble, originally from Norfolk, Nebraska, and currently a professor at Seton Hall University, also made his argument in a presentation on Monday, June 28, at the Legacy of the Plains Museum.

As alluded to in the title of Kimble’s book, the Nebraska Plan that was the nail for the victory of WWII regarded the scrap metal drive. Kimble explained that in 1942, production of steel was low. Production was so low, that Robert Wolcott of Lukens Steel Company forecasted the industry being short 5 million tons in 1942 due to a shortage of scrap metal, which accounts for about 50% of the recipe for steel. For perspective, 173,000 tons would be enough steel for three Iowa-class battleships.

However, by the end of 1942 and into 1943, steel mills were finally getting back up to their production capacity. How? The entire nation took a page out of Nebraska’s notebook, Henry Doorly’s the Nebraska Plan.

The plan was to have the Omaha World Herald, of which Doorly was the publisher, to sponsor a three-week competitive scrap metal drive with the goal of collecting 100 pounds per person across the entire state.

It became a competition among the 93 counties — which county could collect the most scrap metal per capita over a three-week period? The standings were published daily in newspapers across the state and were checked as often as baseball standings. Scotts Bluff ended the competition in 21st place.

By the time the three summer weeks were over, the competitive spirit of Nebraskans reeled in 104 pounds per person across the state. The previous record was just 40 pounds per person set by a small east coast city. Kimble said the entire nation looked at Nebraska and asked, ‘How did they do it?’

Doorly met with the National War Production Board and publishers across the state to tell them exactly that, and helped put into place the Nebraska Plan on a national scale, state versus state. Between Nebraska’s summer drive and the nation’s fall drive, steel production got back on track and even reached peaks over 100% capacity on occasion. What’s more production increased just as the Allied Forces began to take the offensive in the war.

“That scrap was in place over the winter of 1942 and 1943, just as the Allies were going on the offensive,” Kimble said. “So, it was perfectly timed, not only with the battlefield, but also with the production schedule, because it came in just as those steel mills were desperate for more scrap.”

In Kimble’s eyes and based on his research, the war would likely have gone a very different direction, had Nebraska not held a scrap metal drive that turned heads across the country. The role Nebraska played in WWII with the scrap metal drive alone is enough for significant pride in the state, he said.

Yet, not a single of the 500 historical markers across the state or a single mural, statue or painting in the state capital commemorates the role Nebraska played in the scrap metal drive.

Kimble said it’s not too late though.

“I find this remarkable. In a state so full with justifiable pride, we’ve made no room to commemorate one of our proudest moments,” he said. “I think it’s time that Nebraskans finally found a way to commemorate this amazing effort that helped change the course of history. I don’t think that it’s too late.”

'Remember where you are from': Deploying soldiers offered words of support during send-off

A mother hugged her soldier son, sniffling and wiping away tears as she held his arm and he sang “The Army Song.” A father shared smiles and k…

James Kimble, professor at Seton University and originally from Norfolk, Nebraska, gave a presentation on Monday, June 28, at Legacy of the Plains Museum on his book "Prairie Forge: The Extraordinary Story of the Nebraska Scrap Metal Drive of World War II,” which was selected for the 2021 One Book One Nebraska statewide reading program. Kimble claimed World War II would have been lost or taken much longer had it not been for Nebraska's efforts.

Kimble's "Prairie Forge" was selected as this year's One Book One Nebraska.