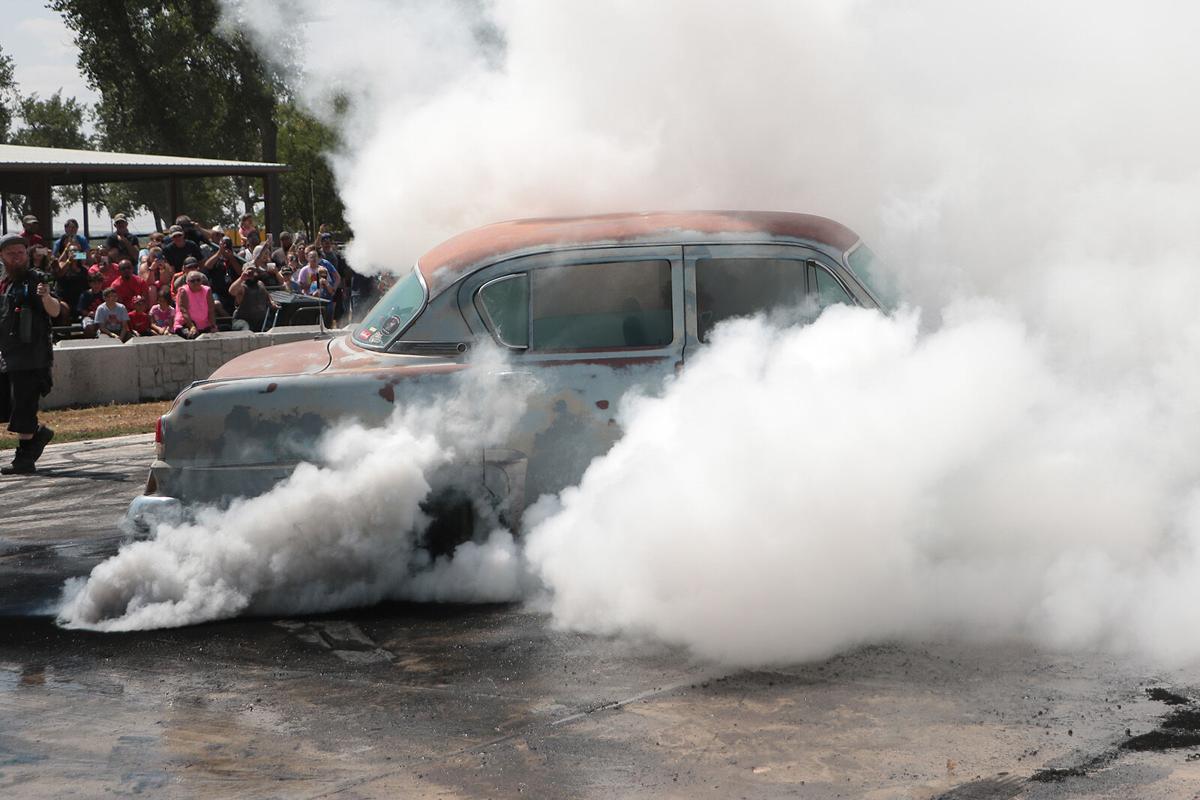 A car disappears in a plume of smoke during the burnout contest at the High Plains Riot at the Scotts Bluff County Fairgrounds on Saturday. 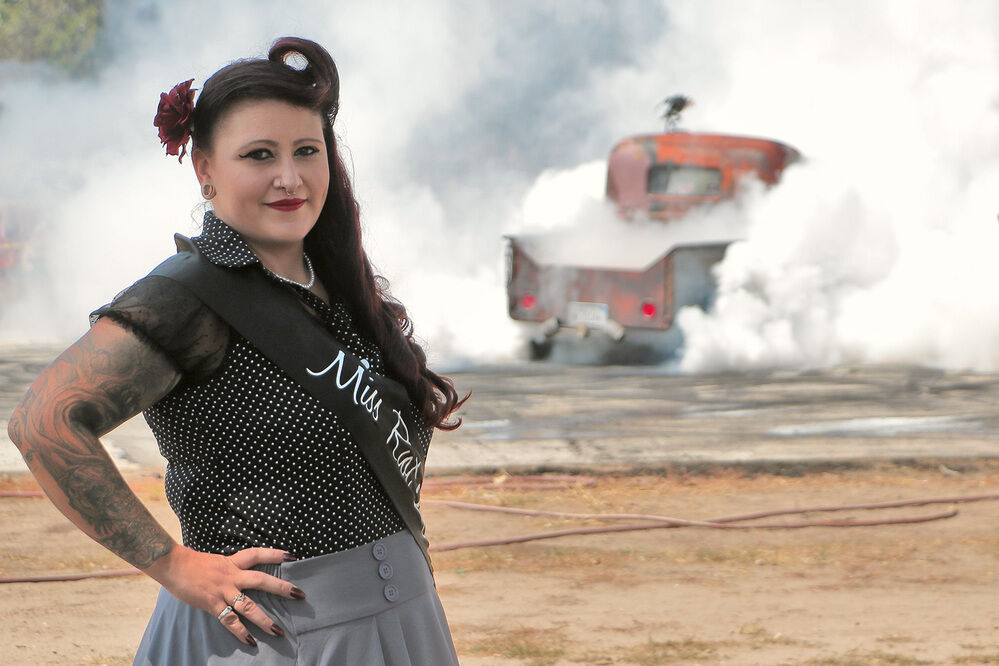 Miss Riot Jess Bolton poses in front of a truck competing in the burnout contest at the High Plains Riot at the Scotts Bluff County Fairgrounds on Saturday. 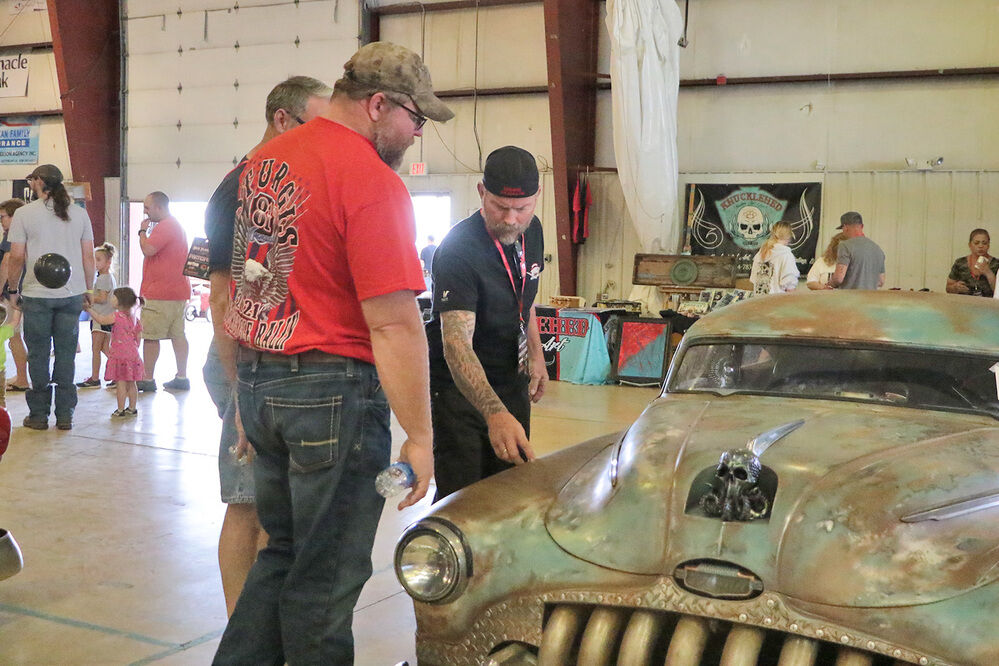 Car owner Paul Barnes points out details of his car "Ursula" to event-goers at the High Plains Riot at the Scotts Bluff County Fairgrounds on Saturday.

The High Plains Riot burnout contest proved to be a big hit, but one of the biggest hits of the show was a car called Ursula.

Ursula, a 1952 Buick Special, has been a labor of love for owner Paul Barnes.

“We have had it about five years, and we started seriously working on it about a year and a half ago. (The previous owner had) started (the project) and didn’t know what they’re going to do with it. So, we bought it and I also bought a donor car. We put it all together. What you see today,” Barnes said.

The previous owner had started doing work on the car, but the work was substandard leaving Barnes with a lot of work to get it back in shape.

“Somebody already started doing the chopping and sectioning in it, and didn’t have an idea of how to put it back together.,They had just kind of tacked it all together, the whole car. They were trying to do too much too soon without structurally putting the car back together first,” he said. “I had to cut it all back apart. It basically almost would have been better if I started from the beginning, but it was either this or the car is going to get junked. The guys offered me at a cheap price, so I took it. I took it all apart and started over again.”

The car looks like it could have come straight from the set of a “Mad Max” movie, but it took him a little bit to come up with the theme he would use to build the car.

“We kind of got the whole little (skull and octopus ornament) in front. When we bought it we thought that this would be kind of a cool theme to run through Ursula, this kind of big boat-looking land yacht. We thought she’s got to have a name and then we thought of Ursa, who is this big girl. The car has an “Evil Dead” kind of theme.”

Barnes said he didn’t quite know what he was going to do with it initially.

“Originally, I was thinking more Frankenstein because it was very cut up when I got it,” Barnes said.

While the car was being shown off on Saturday at the Scotts Bluff County Fairgrounds, renowned artist Dan “Knucklehed” Johnson penned Poor Unfortunate Souls on the deck lid to complete the rear of the car.

Miss Riot Jess Bolton, aka Bonnie Bunny, was also on hand to welcome visitors to the car show.

Bolton was also there with a non-profit group she started — Rockabilly Misfits. She said the idea for the group came to her after another had failed.

“I originally had a roller derby team, and I wanted that team to play the sport and be a part of the community. Well, that really didn’t pan out, so I wanted to do something different,” she said. “I’ve always had the love for vintage and rockabilly and stuff like that, so I started the Rockabilly Misfits as my way to be out in the community and get other people involved.”

Bolton began putting the group together in January 2020.

“I just started putting it out there on social media and then I did a meet and greet last year in September at a truck show,” she said.

Bolton said they’ve been busy in the community doing their part to help raise money for different charities. They have held 50/50 raffles, put out donation jars and volunteered their time for different causes.

High Plains Riot founder Jeremiah Gardner said he chose Bolton to represent the event as Miss Riot because she is the epitome of a strong, independent woman and mother.

After the car show on Saturday, there was an awards ceremony and an After Party in downtown Mitchell.

The Riot winds down on Sunday with HotRod Church and a cruise to the Scotts Bluff National Monument at 11:30 a.m.

'Remember where you are from': Deploying soldiers offered words of support during send-off

A mother hugged her soldier son, sniffling and wiping away tears as she held his arm and he sang “The Army Song.” A father shared smiles and k…

COVID-19 cases in Panhandle continue to be on the rise

Though some areas of Nebraska have been experiencing declining case levels, the Panhandle continues to see an increase in cases and hospitalizations.

In 2008, one month before turning 40, at which age she promised her husband John Mulholland to get a physical, Anne Mulholland found “what fel…

A car disappears in a plume of smoke during the burnout contest at the High Plains Riot at the Scotts Bluff County Fairgrounds on Saturday.

Miss Riot Jess Bolton poses in front of a truck competing in the burnout contest at the High Plains Riot at the Scotts Bluff County Fairgrounds on Saturday.

Car owner Paul Barnes points out details of his car "Ursula" to event-goers at the High Plains Riot at the Scotts Bluff County Fairgrounds on Saturday.