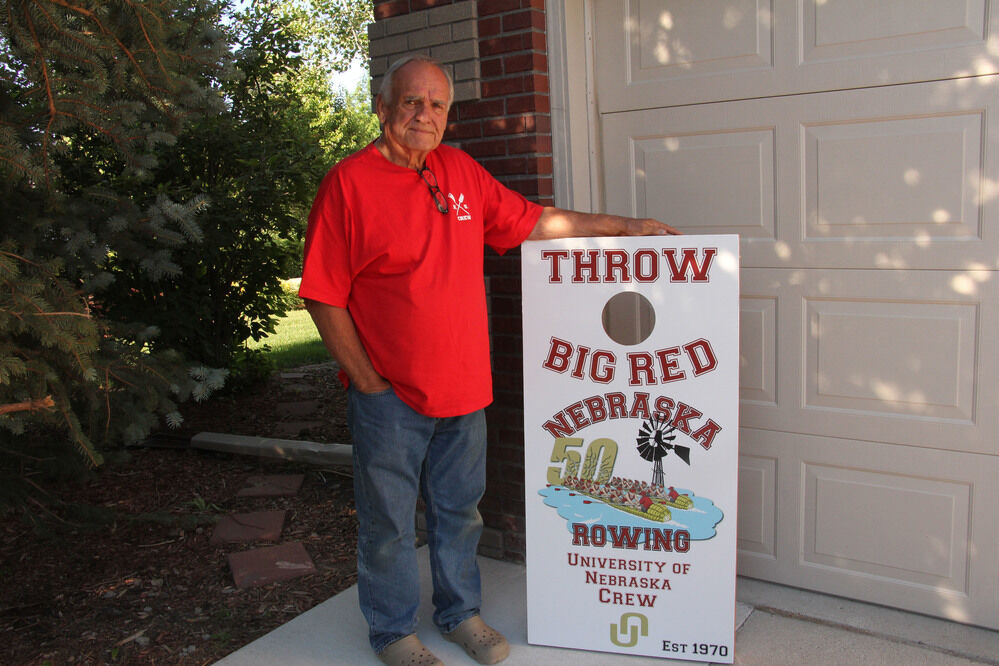 Allan Maybee, founder of the UNL rowing team, poses with a custom cornhole board at his Scottsbluff home. It was made for the club’s 50th anniversary celebration in September.

A picture of Allan Maybee back when he coached the Nebraska rowing team he founded./Photo provided by BRAD KUHN.

Allan Maybee had never rowed in 1970.

The then-graduate student at the University of Nebraska-Lincoln had five years of running canoe competitions under his belt, but competitive rowing was another beast entirely.

Despite pushback, he founded a rowing club that would become known as the Nebraska Crew. Half a century later, the Crew is preparing a celebration to commemorate their golden anniversary.

“Allan is ground zero,” Brad Kuhn said. “He’s the man who made it happen.”

Kuhn manages communications for the Friends of Nebraska Rowing alumni support organization. He spent his time at UNL in the early 1980s rowing with the Crew.

It’s the Friends who are putting together September’s festivities. A reception, banquet, and, of course, rowing are on the agenda. Technically, it will be the team’s 51st anniversary. “But COVID, y’know,” Maybee, a Scottsbluff resident, said.

The anniversary celebration will run Sep. 24-25 in Lincoln.

The man who started it all is already preparing for the trip with refurbished oars and custom cornhole boards to bring. He said he’s looking forward to returning to where the Crew began.

Maybee said it was an ambitious concept, introducing a water-based sport in the only triply-landlocked state. “I knew it would be a totally foreign sport,” he said. However, in his first year he amassed some 90 students to join. “We had one of the largest athletic programs on campus, but zero support.”

Maybee said he wasn’t afraid to butt heads to garner support from UNL higher-ups. This included spats he claims he had with then-athletics director and football head coach Bob Devaney.

“Almost right away, I began to feel resistance,” Maybee said. “(Devaney) was saying, if it’s a non-income-producing sport, it should be a club sport, not a varsity sport.”

Rowing needed to be a varsity sport, Maybee said, because it would maintain competitive rigor and consistency.

“I was not going to let Bob Devaney sink rowing,” he said.

With an aptly-named boat, ‘The Genesis,’ gifted by Kansas State University, the Crew began competing in a variety of tournaments. Rowing is the oldest collegiate sport in the nation, but in the 1970s it was mostly a coastal one.

That allowed him to do things Devaney’s football team couldn’t, like compete against Ivy League schools. One of the Crew’s first tournaments took place in Boston.

“In that competition, all the Ivy League schools you can imagine. And here we are. Big Eight,” Maybee said.

The Crew went on to be successful elsewhere. Maybee said he compared his team’s GPA to Devaney’s football players, and the rowers were usually higher. One Nebraska rower, Lisa Rohde, even won a silver medal in the 1984 Olympics.

“What I had done is play football,” he said. “It’s belitting what you can talk men into doing for the sake of glory. When I played college ball, they called it ‘Getting your bell rung.’ Today they call it concussions.”

Rowing, he said, was a purer form of sport.

Thanks in part to Maybee’s efforts, the Crew will have a new “home water” at Pawnee Lake, several miles closer to Lincoln than their current practice location of Branched Oak Lake. They recently signed a full-time coach.

Maybee says he is looking forward to the next 50 years.

A track and casino is proposed on a 104-acre site on the south side of Gering, nestled between Five Rocks Road and Highway 71. Features would include a 5/8 mile track, six stall barns, a paddock viewing area, a grandstand, a rooftop terrace and a parking lot with 780 parking spaces.

Allan Maybee, founder of the UNL rowing team, poses with a custom cornhole board at his Scottsbluff home. It was made for the club’s 50th anniversary celebration in September.

A picture of Allan Maybee back when he coached the Nebraska rowing team he founded./Photo provided by BRAD KUHN.