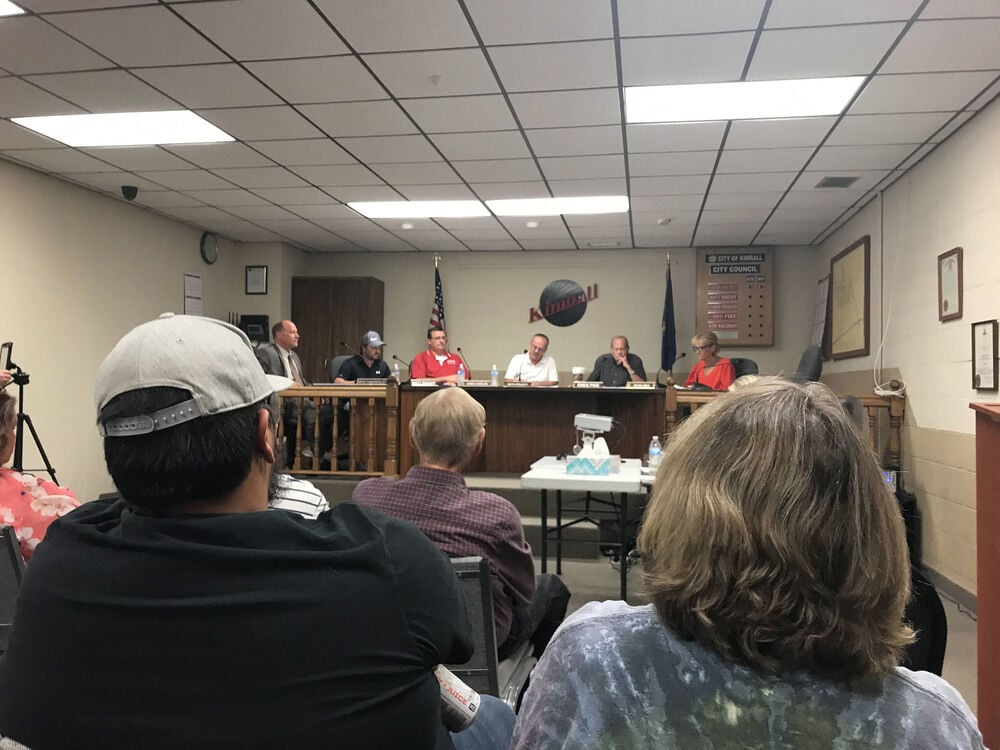 The Kimball City Council voted against Mayor Keith Prunty's appointment of Annette Brower to the city administrator position after a heated discussion from the public. The town will now have to start back at square one in finding a replacement. Brower, along with city clerk Katherine Terrill, will remain an interim co-city administrator. 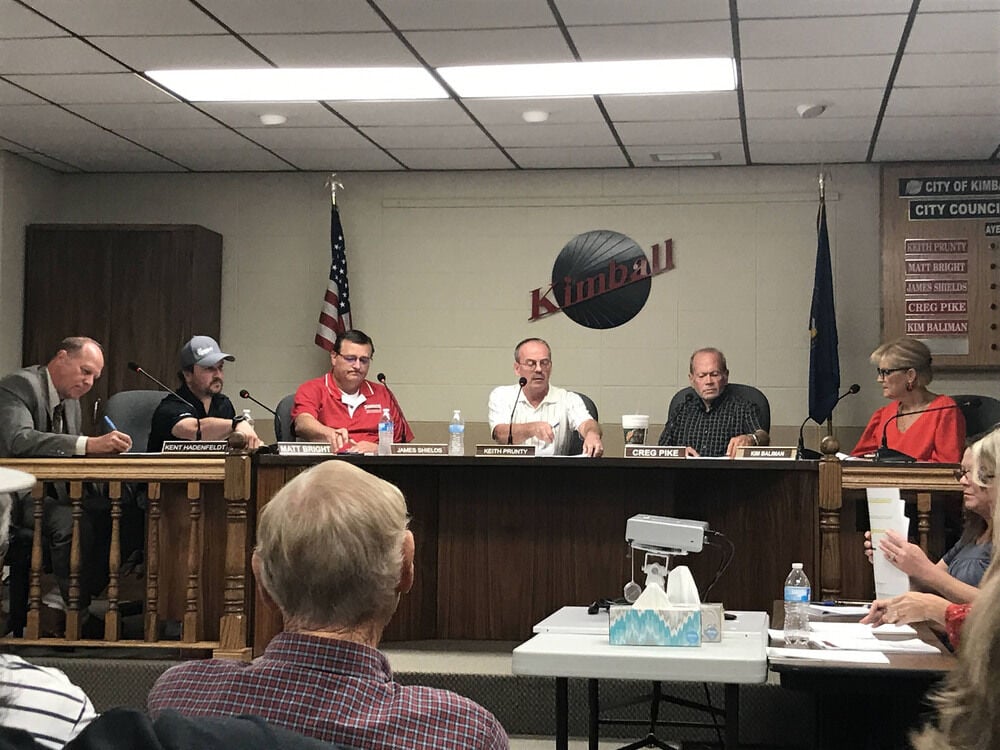 The Kimball City Council voted against Mayor Keith Prunty's appointment of Annette Brower to the city administrator position after a heated discussion from the public. The town will now have to start back at square one in finding a replacement. Brower, along with city clerk Katherine Terrill, will remain interim co-city administrator.

The city of Kimball goes back to square one in their search for a permanent city administrator after Mayor Keith Prunty’s appointment was voted down 3 to 1 at the Sept. 15 meeting.

Prunty had appointed Annette Brower, who currently serves as city treasurer and co-interim city administrator with city clerk Katherine Terrill, over another local candidate Carson Sisk, who serves as the city’s water superintendent.

The mayor’s decision caused a rift in the community, which was noted at the Tuesday city council meeting were standing room only.

After the council held two public hearings on the town’s budget and property tax request with no public commentary and a quick unanimous approval of the Restricted Fund Lid, emotions in the room started to ramp up when Prunty opened up discussion on his appointment for city administrator.

“Decisions are going to be made that are not popular, but I think are the right ones,” Prunty said to shaking heads in the crowd.

According to Prunty, no one came to him with concerns about his appointment, but other council members said otherwise.

“The people that came to me have real questions about the timing and the delay and the fact that Mrs. Brower, and no disrespect, had privy to every application that came in prior to applying,” council member Kim Baliman said.

Council member Matt Bright, who also said he received word from concerned community members, said some members said they were afraid to talk to Prunty.

According to Prunty, applications opened back in April, but due to COVID-19, city officials held off on interviews until restrictions lifted and kept the applications open until Aug. 4. Much of the discussion at the meeting revolved around Brower being a part of the review committee for the city administrator applications.

Prunty said the review committee is comprised of a council member, the mayor, a board of public works member, city clerk, city treasurer and the chief of police. This happened to include Brower since she is the current city treasurer.

“It seems a little bit unethical that she (Brower) sat on the review committee seeing every single application that came in,” Ashley Sisk, wife of Carson Sisk, said. “So, that is an unfair advantage for her to see 20 plus applications, and including Carson’s, and then create her own.”

Ashley Sisk told the Star-Herald her husband’s application for city administrator was in before the previous administrator, Dan Dean, officially retired and Brower’s application came in the day before interviews began back in early August, claiming that gave Brower time to tailor her application to the position.

According to Brad Brower, husband to Annette Brower and who spoke from the crowd at the meeting, Annette did ask to be removed from the review committee when a couple of her subordinates, including Carson Sisk, put in their application.

Prunty said she was involved in sending application documents and meeting notes to other committee members but wasn’t actually part of the reviewing process since she did not attend any of those meetings or preliminary interviews.

“All that review committee was for is to pass on applications for final interview,” he said.

Ashley also said at the meeting that Carson Sisk had sent an email to Prunty in July asking to move forward with the interviews, claiming that Brower would not have put her application in if they had started the interviews sooner. She said Prunty never followed up with Carson Sisk in response to his questions.

Prunty acknowledged at the meeting he received the email and called it “rather interesting.”

“I wasn’t tyring to be abrasive,”  Carson Sisk told Prunty at the meeting. “I’m sorry you took it that way.”

Carson Sisk declined to share details of the email with the Star-Herald but said he just had some questions for the mayor.

After the nearly half-hour discussion, council took to a vote to approve Brower as city administrator. The motion was brought forward by Shields and seconded by Creg Pike. Shields was the only council member to vote in favor.

Prunty said they will now have to start over and applications for city administrator will open back up, but there is not a timeline set for the process yet. Brower, along with Terrill, will remain co-city administrators until a permanent replacement is found.

“Everything that we’d done the last six months for naught,” he said.

Margaret Mathison, 23, died in the crash that occurred on Highway 71 in Banner County, according to information released by the Nebraska State Patrol.

Justin Zambrowski, 44, and Rachel Wasserburger, 24, were sentenced on charges of possession with the intent to distribute 50 grams or more of a mixture of methamphetamine, stemming from a March 2019 arrest in Banner County.

In a show of support for Reina Sanchez, 4, superheroes will gather near the Gering landfill on Sept. 18 to show support for a 4-year-old girl with a love for comic books.

The trial of a Torrington man charged in the shooting death of a Scottsbluff woman has been moved to next year.

One killed in Banner County rollover

One person has been killed and another injured in a Banner County rollover.

A Torrington man died in a crash Tuesday, Sept. 15, near Lingle, Wyoming.

The United Way held a Monday news conference to announce the winners of this year’s Duck Draw. United Way of Western Nebraska's Jill Allen said support for United Way has remained strong even during the pandemic.

Testimony in the two-day trial of Jon Worthman, a former public defender, arrested in January on drug charges wrapped up Wednesday. Worthman's attorney argued the man purchased drugs from an informant, but wasn't distributing drugs.

Owners of another local business say ta Terrytown restaurant has become a victim of the COVID-19 pandemic. Tammy Relka, operator of Sizzlin’ S…

The Kimball City Council voted against Mayor Keith Prunty's appointment of Annette Brower to the city administrator position after a heated discussion from the public. The town will now have to start back at square one in finding a replacement. Brower, along with city clerk Katherine Terrill, will remain an interim co-city administrator.

The Kimball City Council voted against Mayor Keith Prunty's appointment of Annette Brower to the city administrator position after a heated discussion from the public. The town will now have to start back at square one in finding a replacement. Brower, along with city clerk Katherine Terrill, will remain interim co-city administrator.