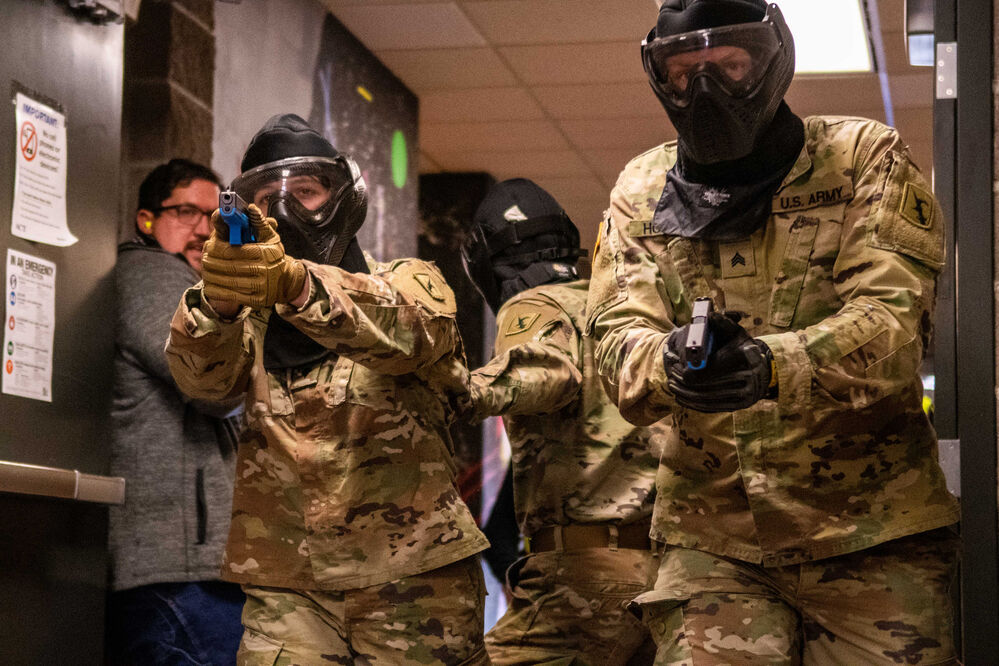 Specialist Dakota Hughes (left) ) and Sergeant Jordan Houser of the Nebraska National Guard’s 1057th Military Police Company move through the halls of Chadron High School with guns at the ready during an active shooter training exercise Sunday in Chadron, Nebraska. Specialist Alexander Mrsny, in the back, brings up the rearward position. 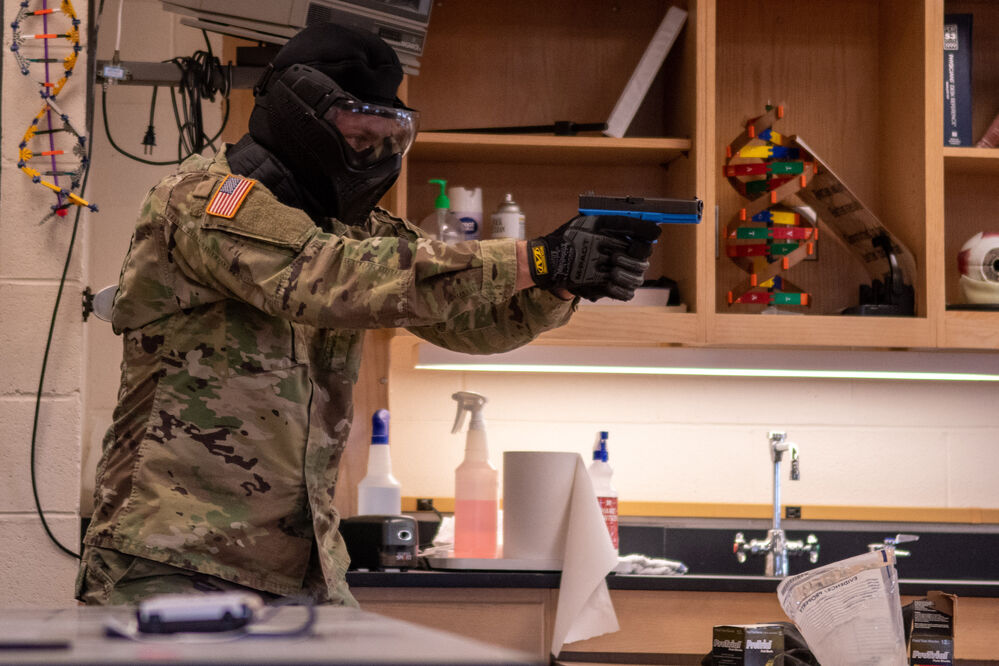 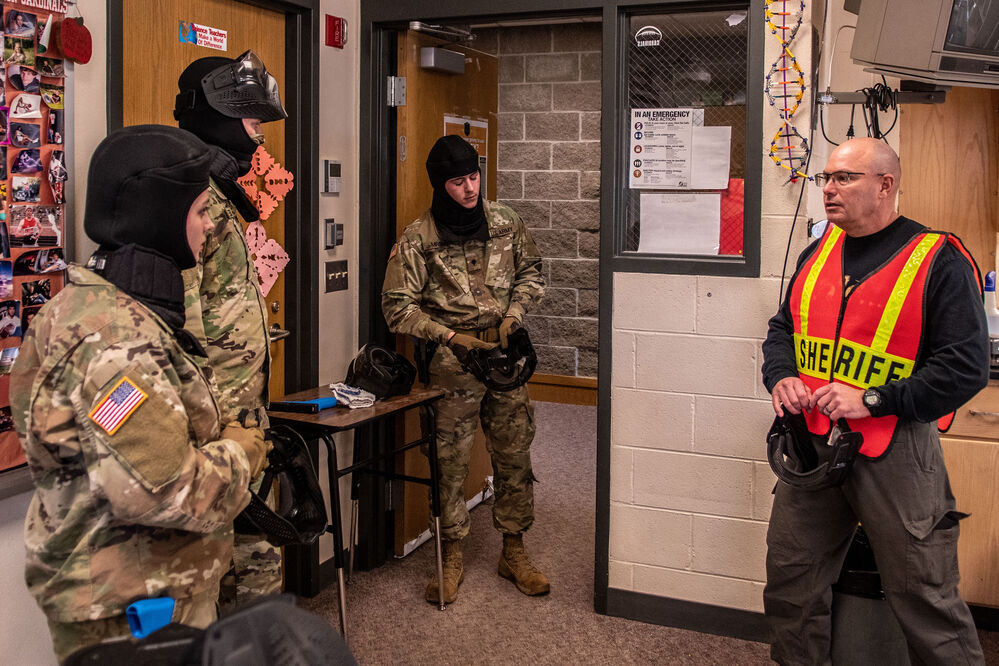 By BRANDON DAVENPORT For the Star-Herald

Over the past several months it’s been commonplace to see people wearing masks in the halls of Nebraska’s schools. On Saturday and Sunday, the men and women of the 1057th Nebraska National Guard Unit wore a different kind of mask: protective face shields, like those you’d see on a paintball field, and carried distinctive blue and black training handguns through the halls and classrooms of Chadron High School. The Nebraska National Guard soldiers were practicing the skills needed to respond to an active shooter situation.

During the training, soldiers of the 1057th, a military police unit based in Chadron and Scottsbluff, were taught how to move in teams within the confines of a building, evaluating thresholds like doors and other openings, and making room entries in pursuit of neutralizing or isolating any encountered threats, Brown said.

CHS’s complex layout made the building a good candidate to host the training, Brown said. Multiple doorways, long hallways, odd angles and the fact that a threat can come from any direction make responding to an active shooter situation in such a building particularly dangerous, he said.

First Lieutenant Kevin Peatrowsky of the 1057th said that though it would be unlikely the National Guard would be asked to respond to a shooting at a public school, a military base is a microcosm of any society and includes schools and even malls on some of the larger bases.

“As military police, if say we were ever called upon to take over the patrols of Fort Riley, for example … this is something we would be expected to know how to do,” Peatrowsky said.

“(The Simunition ) travels about 300 feet-per-second so you do hear a bang, you do see a flash and you do feel an impact if you get hit,” Brown said. “But it’s not an impact that’s going to cause major injuries.”

Brown, Peatrowsky, and Sergeant First Class Matt Dodge, a Scott’s Bluff County Sheriff’s deputy as well as platoon sergeant for the 1057th’s 1st platoon, all spoke of the necessity to desensitize responders to the sights, sounds and stresses of an active shooter situation.

“Once that heart rate gets up to about 180 beats-per-minute people start to get tunnel vision, you get that auditory exclusion and they’re not able to focus as well,” Dodge said. “With the Simunitions, with the blank fires, having the actors screaming and yelling in a school environment helps that stress inoculation, kind of ups it a little bit, and they’re able to work with those different tactics and different agencies to be successful.”

Dodge helped connect the unit with Brown and the other instructors. His previous experience with the course helped him understand the importance of training for active shooter situations, he said.

“For the training aspect of neutralizing an active shooter on the Army side, it’s really important since we’ve started to realize since the Fort Hood shooting that they would need to work with different agencies,” he said.

On Nov. 5, 2009, Nidal Hasan, then a U.S. Army major and Army Medical Corps psychiatrist, killed 13 and injured 30 others at Fort Hood near Killeen, Texas. Recently, In May of 2020, a sailor at Naval Air Station Corpus Christi, Texas, was shot in her bullet-proof vest when a gunman opened fire at the base’s security gate, and in late 2019, two shootings, one at Naval Air Station Pensacola, Florida, and one at the Pearl Harbor Naval Shipyard near Honolulu, Hawaii, claimed the lives of a combined five individuals. According to the FBI, seven of a total 277 active-shooter incidents in the U.S. occurred on military property between the years 2000 and 2018.

A 32-year-old Torrington man is accused of stabbing and strangling his 20-year-old girlfriend, according to testimony during a court hearing M…

ASK A COP: Why can’t the cops make a trespassing arrest?

Each week, Scottsbluff Police Cpl. Krisa Brass will answer questions submitted by Star-Herald readers. Send questions for consideration to you…

Area authorities assisted in the arrest of a Wyoming man sought on federal charges on Wednesday.

Seward County Sheriff Mike Vance said both of the drivers were taken to a hospital in Lincoln for their injuries. But there were no serious injuries reported among the Pius X High School girls team.

A first-degree murder charge was filed against Sean Pettus, 32, in the death of Madison Cook, 20.

In the lawsuit filed this week, Guy Brock sued the city, the mayor and city attorney, alleging they retaliated against him for exercising free speech and petitioning his elected and appointed representatives.

Police said Kade Coble had been spotted in a vehicle but got out and ran at Antelope Park, near 33rd and South Streets, setting off a large search late Friday morning.

Cheyenne County authorities are awaiting results of accident reconstruction in a crash that killed a Sidney couple Friday. The couple's 1 1/2 year old daughter is hospitalized in Colorado.

Court documents outline charges of arson and theft against a Torrington man in custody as police investigate the homicide of a Torrington woman.

Specialist Dakota Hughes (left) ) and Sergeant Jordan Houser of the Nebraska National Guard’s 1057th Military Police Company move through the halls of Chadron High School with guns at the ready during an active shooter training exercise Sunday in Chadron, Nebraska. Specialist Alexander Mrsny, in the back, brings up the rearward position.