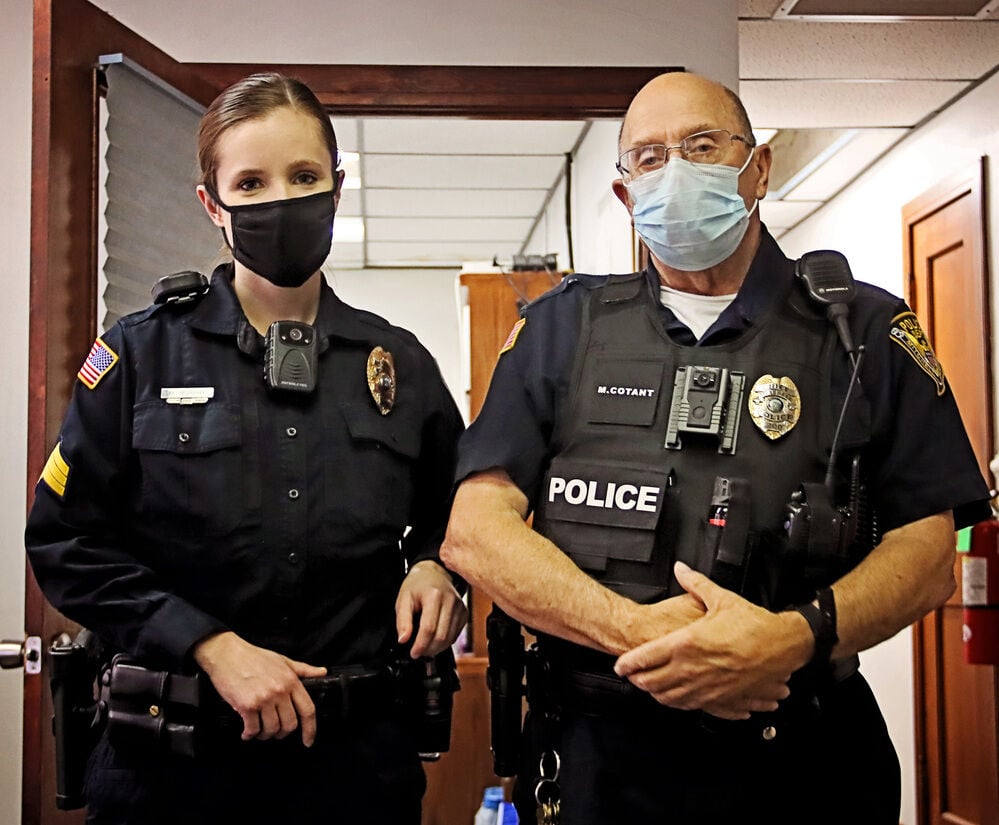 Mitchell Police Chief Mike Cotant (right) and Sgt. Mandy Murphy, interim police chief. The Mitchell Police Department will be in a transition period as Cotant steps down from the position he has held for more than a decate. 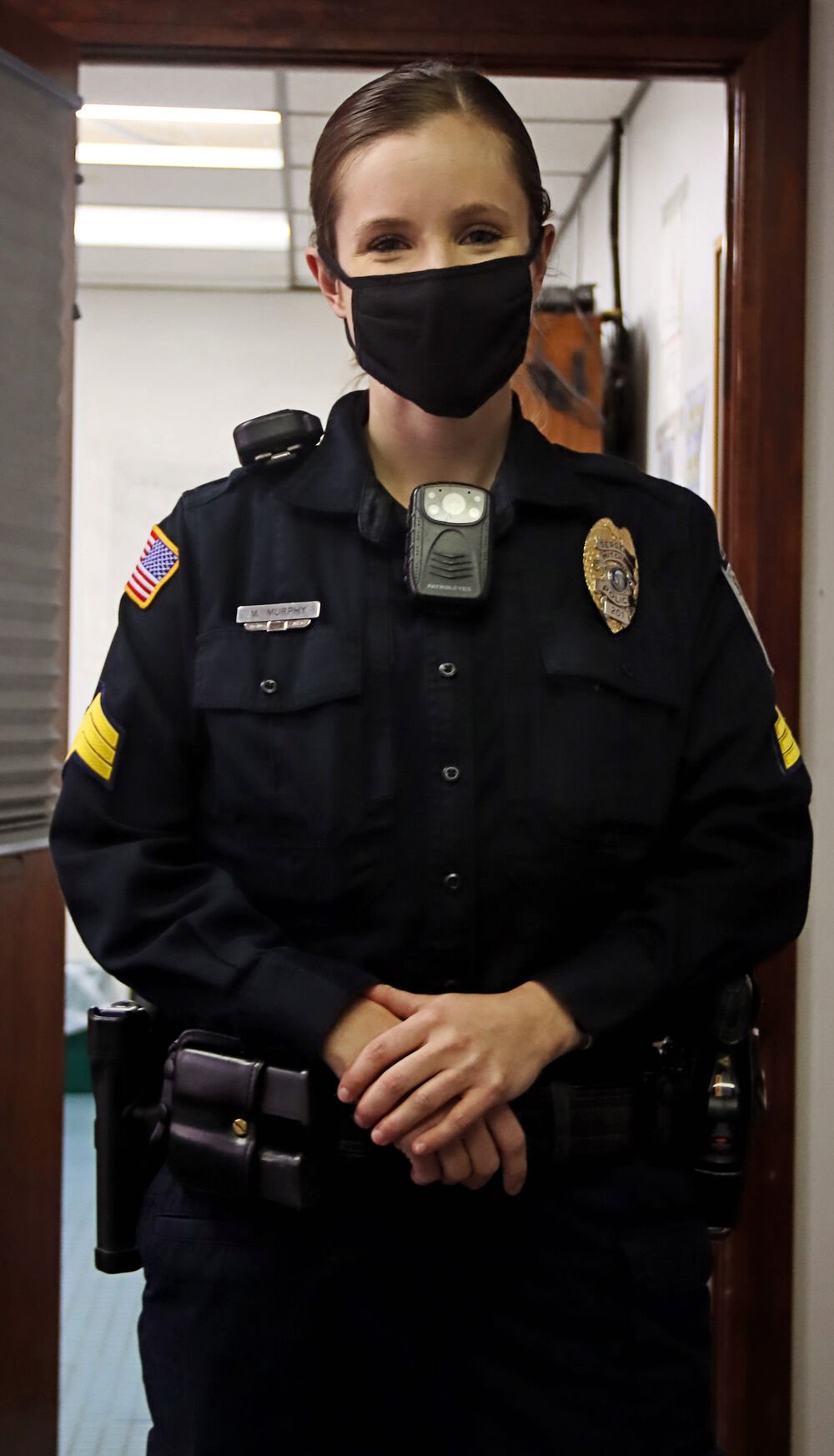 Mandy Murphy, a sergeant with the Mitchell Police Department, has been with the department for six years. She was recently named as interim chief of the department as it transitions to a new police chief. 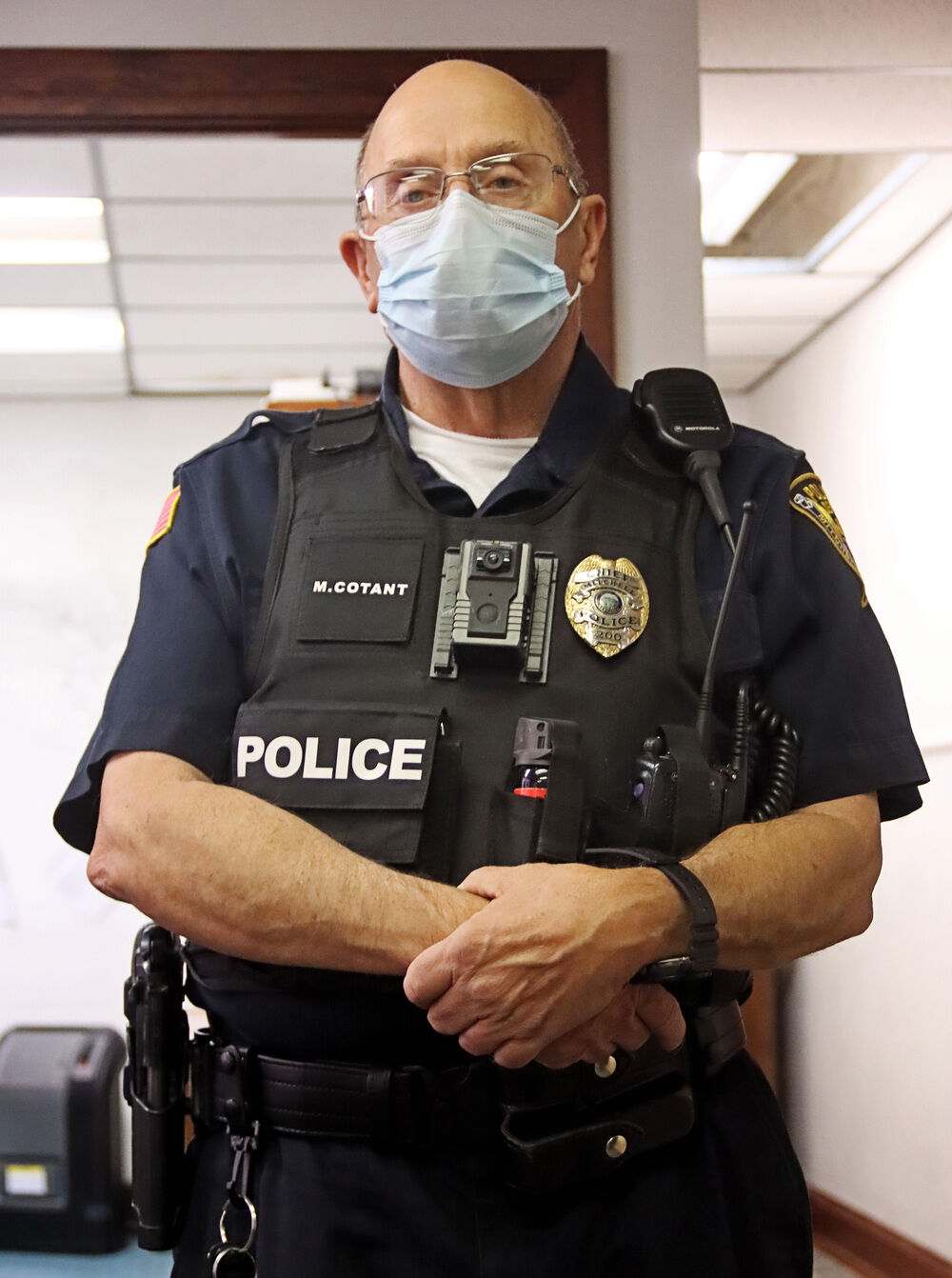 Mitchell Police Chief Mike Cotant will be stepping down from the position after more than a decade heading the department. He has spent nealy 30 years in law enforcement and continues to explore opportunities for his next step.

Though Cotant is said to be retiring, the long-time law enforcement officer said he is pursuing other law enforcement positions. He continues as chief, but in a supporting role as the department transitions.

Murphy, who has worked as a part-time officer for the Mitchell Police Department for six years, told the Star-Herald that she doesn’t intend to take on the role of police chief permanently. She’ll work in the interim as police chief, but at least right now, she desires to continue to work part-time as she and her husband, Anthony, have two younger children.

However, if a full-time police chief replacement isn’t named by April, Murphy said she’ll work full-time in that position for at least a period of time.

“It’s definitely a position that needs to be full-time,” she said of the chief position.

In the meantime, Murphy is learning from the outgoing police chief, a chief with nearly 30 years experience in law enforcement.

Cotant began his career with the Mitchell Police Department as a part-time officer, working for 11 years under then-chief George Harpole and assistant chief Doug French while he served as an investigator with the Scotts Bluff County Sheriff’s Department. He pursued the chief position after predecessor Ken Webber left the position.

Harpole encouraged Cotant to pursue the position of chief.

“George kind of pushed me into it,” he said of his decision to apply for the position and being appointed by then-mayor Brian Taylor. He started in November 2011. “He said, ‘Now’s the time. If you’re gonna do it, you need to do it now.’”

Cotant has worked in law enforcement since 1992, after he left the military. His first job was at the Lyman Police Department, a position he began just one month after leaving a career in the Navy. He served for four of the six years he worked for the Lyman department as chief.

While at Lyman, he also worked as a reserve deputy with the Scotts Bluff County Sheriff’s Department for four years before joining the department full-time in 1998. He served a short stint as a patrol officer before becoming an investigator.

In his career as an investigator, he said, he had some great experiences tied to his training, from learning about blood spatter analysis to fingerprint analysis, and he took the stand to testify in many investigations throughout that time.

Asked to reflect on those initial months of switching from an investigator position at the Scotts Bluff County Sheriff’s Department to heading a department, Cotant says he can admit that “I kind of got overwhelmed at everything that was thrown at me.”

Most police officers don’t understand the administrative duties of a position, he said, and it wasn’t until he was also in that position that he did.

“We think we know what goes into being the boss, but we don’t,” he said, echoing a sentiment of many a police chief or administrator.

State reporting, managing a department with just three officers at the time and other duties that he found himself doing without the training of previous administration took some time to adjust to doing. He said a Nebraska State Patrol Training Academy for supervisors as well as help from the Nebraska Crime Commission were helpful during that transition period.

During his tenure, the department has increased from three police officers to seven. The department currently has four full-time and two part-time officers. A third part-time position is vacant.

Not having enough manpower was one of the first issues that Cotant said were addressed when he became police chief, with the approval of the council to add additional personnel.

Every day is unpredictable, he said, so bringing on part-time officers helped to fill out the staff. He said he recalls those first months with the department as having only three law enforcement officers working long shifts and is appreciative of the changes that were made.

“I can’t just look into my crystal ball, and say ‘Well, today, we’re going to have ‘X’ amount of domestic assaults or whatever,” he said.

Murphy is one of the department’s two part-time officers. She began pursuing a law enforcement career after majoring in criminal justice with Bellevue University.

“It just sparked my interest, and I really enjoyed it,” she said.

She attended the Nebraska State Patrol Law Enforcement Academy as part of an internship established for acquiring her degree.

At the academy, she said, she took an interest in becoming an officer. She has been in law enforcement now for nine years, working three years for the Bridgeport Police Department before coming to Mitchell.

“There was a lot of different things that I enjoyed learning about,” she said. “I knew it would be a good experience to start out here, and maybe go to probation or something like that, but I just have really liked it and not wanted to leave.”

At a small department, Murphy said, an officer can do many things, from traffic enforcement to investigations.

"Mitchell is kind of nice because you can be as busy as you want to be,” she said. “If you don’t have anything that you’re being called for, you can go out and find it. It’s nice because you’re never bored.”

In Mitchell, Cotant and Murphy said, child abuse and drug investigations continue to see increases. Some departments have reported declines in child abuse reports during the pandemic, but Cotant said the department continues to see regular reporting.

“We’re getting a lot, still getting a lot of reports,” he said. “Now, it’s the parents that are calling or, you know, there may be daycare centers.”

Cotant said he remains concerned, as a law enforcement officer, about talks to legalize marijuana and believes that it will contribute to an increase of in narcotics investigations in Mitchell and the Panhandle.

Murphy said the city had begun advertising for a permanent replacement for the chief position this week.

“It closes at the beginning of next month, and we’ll see what we get (in the form of applicants),” she said.

A Goshen County jury convicted a Torrington man in the Jan. 24, 2020, shooting death of a Scottsbluff woman Thursday.

The trial of a Torrington man accused of shooting a Scottsbluff woman began on Monday. Terry Anderson has been charged in the Jan. 24, 2020, shooting death of Deedra Strauch.

A Bayard woman faces drug charges after being arrested in connection with a December pursuit.

The Goshen County Sheriff took the stand in the second day of trial against a Torrington man charged in the shooting death of a Scottsbluff woman.

A Mitchell man and Scottsbluff woman face drug charges after allegedly selling methamphetamine to an informant.

Gering man killed in I-80 crash

The Nebraska State Patrol is investigating a collision in which a Gering man died Thursday morning.

Three people face drug charges in arrests made this week.

A 20-year-old Gering man has been accused of sexually-assaulting a 15-year-old girl in the summer of 2019.

Mitchell Police Chief Mike Cotant (right) and Sgt. Mandy Murphy, interim police chief. The Mitchell Police Department will be in a transition period as Cotant steps down from the position he has held for more than a decate.

Mandy Murphy, a sergeant with the Mitchell Police Department, has been with the department for six years. She was recently named as interim chief of the department as it transitions to a new police chief.

Mitchell Police Chief Mike Cotant will be stepping down from the position after more than a decade heading the department. He has spent nealy 30 years in law enforcement and continues to explore opportunities for his next step.