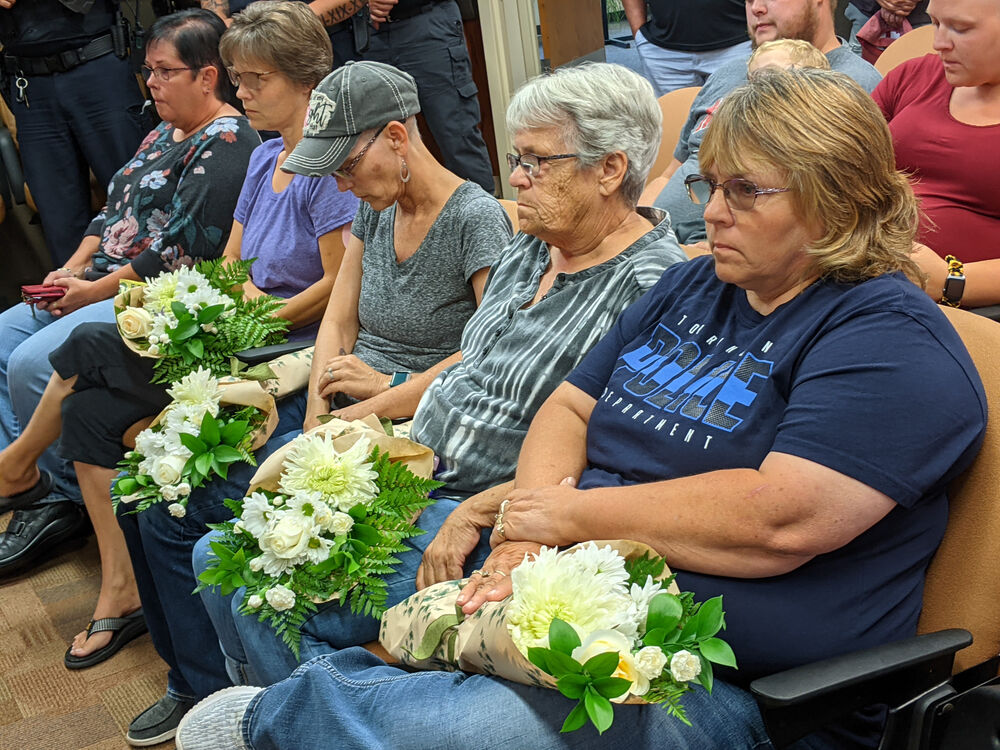 The entire Lt. Harley Mark family stood around his flag memorial outside of the City of Torrington offices Tuesday night after Police Chief Matt Johnson paid tribute to his service.

The Torrington City Council heard a tribute for Lt. Harley Lorenze Mark, by Torrington Police Chief Matt Johnson on the anniversary of his death on Tuesday, Sept. 7 during the council’s regular meeting.

Mark was a TPD Officer who was killed in the line of duty when his patrol car was struck by another patrol car from a different law enforcement agency during a pursuit of a prison escapee on Sept. 6, 1993. The suspect Mark was pursuing was later apprehended in Nebraska.

The entire Mark family was present at the council meeting as Johnson talked about Mark’s service to his community and the appreciation Goshen County holds for him. His wife, Joanne and daughters, Tammy Cearns, Wendy Martinez and Dawn Mark were all presented flowers from officers that attended the meeting.

The first tagging, targeting the Husker Legacy Statue on the east side of the stadium, yielded around $2,000 in damage after vandals sprayed several smiley faces in white paint on the backs of the football players depicted.

"We conclude that ... amounted to a violation of the protections provided by the Fourth Amendment," the judge wrote.

The fight seemed to be prompted by the social media platform that has recently inspired teens across the country — and in Lincoln — to perform "devious licks" by vandalizing school bathrooms and stealing school property.

A Gering man faces charges after being accused of exposing himself to a teen girl at a Gering business.

The entire Lt. Harley Mark family stood around his flag memorial outside of the City of Torrington offices Tuesday night after Police Chief Matt Johnson paid tribute to his service.