Just like most Mondays, Carmen Jording dropped her husband, Kurt, off early in the morning March 23, so he could join other members of his construction team to go to the job site where they would spend the week working.

They exchanged a couple of texts as Kurt rode in the truck that would take the crew to its Interstate 80 location. Carmen laid back down to get some more sleep, but then came a knock on the door.

The Jording’s son, Nicholas, who lived at the time with his parents along with his sister Caitlyn and Carmen’s mom Guadalupe Salazar, told his mom there were policemen at the door, and they wanted to talk to her. Carmen went to the door to see a Nebraska State Patrol trooper and an officer from the Scottsbluff Police Department, both of whom were shuffling papers and, probably unintentionally, avoiding eye contact.

“I’ve seen this in movies,” Carmen recalled. “This is never good. The State Patrol officer told me, ‘There’s no easy way to say this. Kurt was killed in an accident this morning on I-80.’ From there, I literally don’t remember. I started crying and they sat me down at the table. Next thing I know (Caitlyn) is out here (in the kitchen). I don’t even know at what point she came out here.”

The rest of that Monday is a bit of a blur for Carmen. She began calling people — out of an automatic instinct she thinks — to let them know what happened. The message she was sending out, however, wasn’t altogether clear when she called her sister, Hilda Salazar.

“I’m like, I’m talking like this (normally), and nobody can understand a word I’m saying,” Carmen said. “In my head, this is what I sound like. And everybody else is going, ‘I couldn’t understand a thing coming out of your mouth.’ (Hilda) is like, ‘All I could understand out of all that was Kurt and killed and dead.’”

Carmen scrambled to let family know, especially her two other sons, Greg and Alex, before word got out on social media. Alex, who was living in Houston at the time, started the drive back home with two cousins once he could figure out what had happened.

“She didn’t really give me any details other than your dad died in an accident, they got hit by a semi, gotta talk to your brother, and I was like, ‘What?’ and then she hung up,” Alex said. “She needed to get a hold of my older brother.”

Not long before the accident was when the coronavirus pandemic hit the area.

“At one point there were 40 people in our house, and that was right after they had come out and said no more than 10 people in a room, and we’re like, ‘We’re not doing that today,’” Caitlyn said.

In the months that have passed, the Jording family has had good days and bad days, ups and downs, times to cry and times to laugh.

“Every Saturday, (Kurt) would make breakfast,” Carmen said. “The grandkids are here, he’d make them pancakes and bacon, the whole deal. They wanted whipped cream and strawberries? He would buy whipped cream and strawberries. That was the one thing this little one (Emil) said, ‘Who’s going to make me pancakes?’ And it’s like, what do you tell him? I said, ‘Your mom’s going to learn.’ ... It’s been a lot of that.”

The dryer stopped working two weeks after Kurt’s death, and Carmen’s first thought was to call him to fix it. Hilda took Carmen to get a new washer, but then a couple more weeks later, the refrigerator went out.

“That one was really hard. The washer, I didn’t really have time to think about it. It stopped working one day, the next day she took me in and we ordered them. The refrigerator, it was which one should I get? We had picked one out, then when we went to Home Depot, I was looking at it and this was smaller than I thought it was. So we started looking at bigger ones, and I’m like I don’t know if this is going to fit. It was, how? What? So I kind of melted down in the middle of Home Depot that night. It was really hard to make that decision of which one to get because, again, he took care of all of that. He knew all the measurements.”

Dr. Angelyn Nienhuser of New Health Counseling said those days when you just want to get away from everything are OK whether the trigger is a significant date on the calendar or a trip to buy a refrigerator.

“I think it’s perfectly fine for people to have a pity party day, and not invite anybody,” Nienhuser said. “There are going to be times like the anniversary of the person’s death or the birthday of the person you lost or some kind of a significance that’s going to happen. If you’re sad about it, and you really just need to take a day to be sad about it, I think that’s a very healthy thing for you to do. Allow yourself to cry. Allow yourself to feel it. That is honoring your loved one. For people to say, ‘oh, you should be over it by now,’ that’s really not a fair thing to say.”

Having family in the house has been important for Carmen to keep moving forward.

Alex recently moved back to Scottsbluff and in with Carmen and the rest of the family. He’s still adapting to the new dynamic of the family home.

“My whole processing is still not quite there,” Alex said. “I’m not going through it at the same rate as they are. The distance definitely helped me a little bit more than being here and seeing it every single day. I don’t think I’m going through it the same way that they are.”

Pastor Jeff Banks of Monument Bible Church, a church that hosts GriefShare, a program offered for anyone dealing with the loss of a loved one, said it’s important to recognize that everyone grieves at their own pace.

“Someone who has been through that process can add perspective and give you some insight and help you, especially if you get stuck somewhere along the way,” he said. “Because everyone is grieving at their own pace, too. It doesn’t happen the same for everyone. It takes time.”

Family and memories of Kurt are crucial for Carmen as she moves forward after the sudden loss.

“He was the sole provider for us in the house. Grandpa, he loved his grandkids so much. He made sure if they needed anything they had it, whether it left him in the hole or left us with that dollar in our pocket, his grandkids didn’t want for anything.”

Daughter-in-law Rachel, wife of the Jording’s oldest son, Greg, summed up what Kurt meant to the family.

“He was the man in a lot of people’s lives,” she said.

Dealing with Grief: Don't do it alone 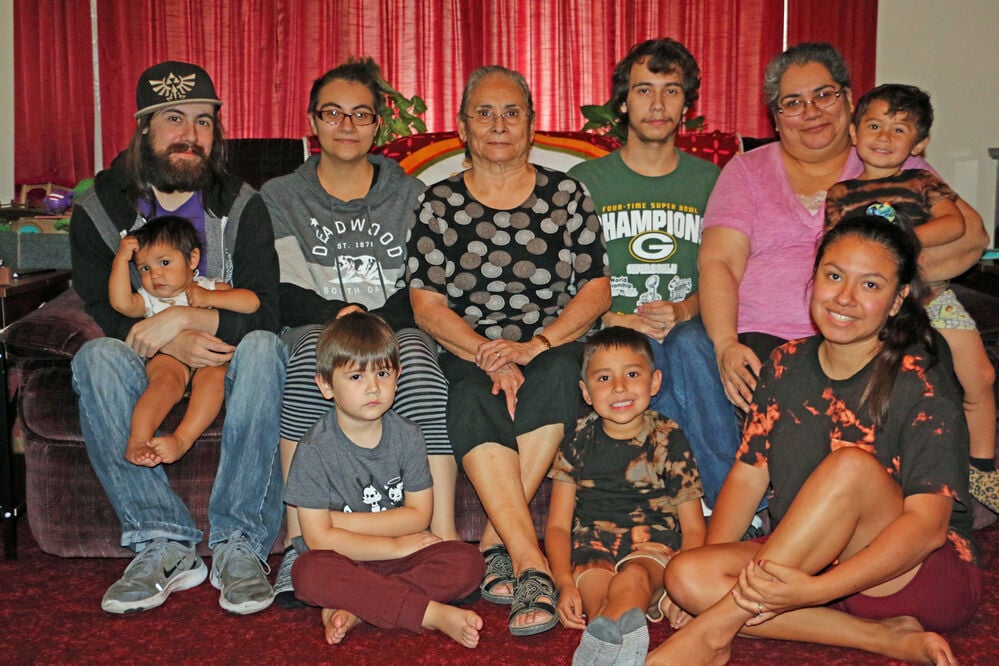 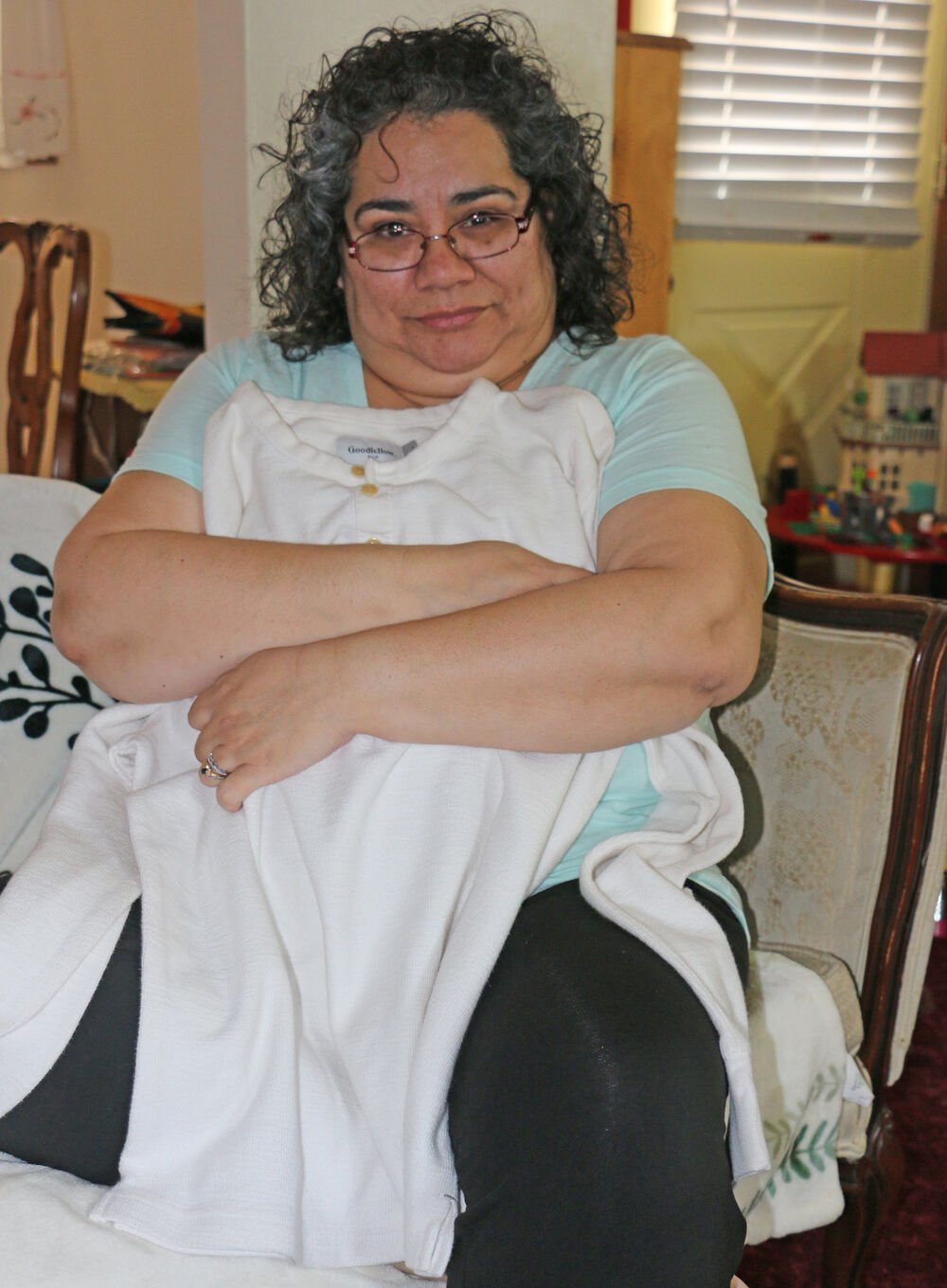 Carmen Jording holds a flannel shirt that her husband used to wear often. Carmen said the shirt gives her comfort.