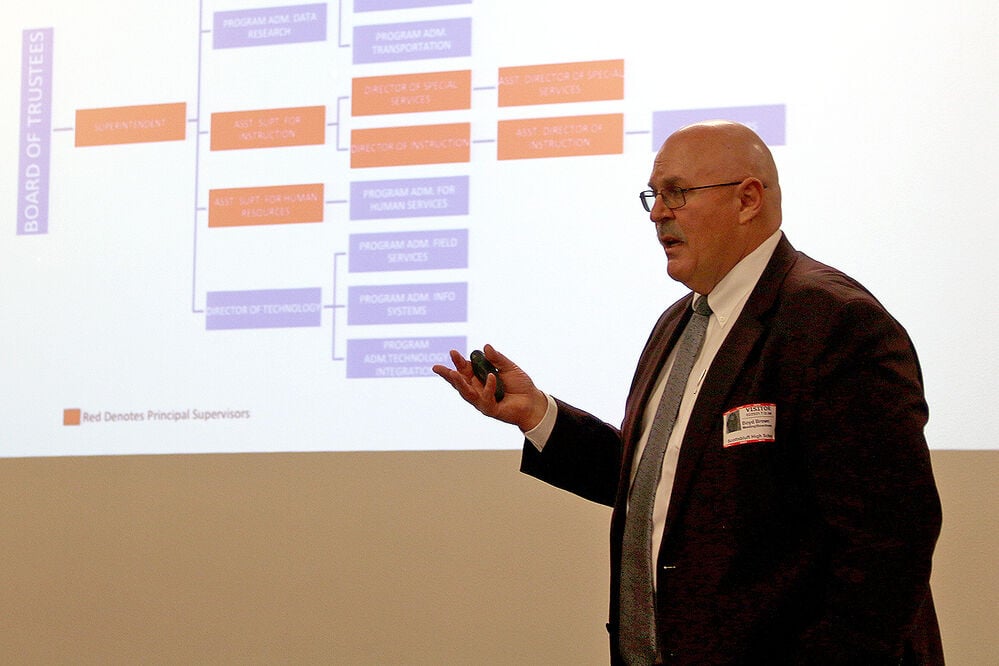 Laramie County Public Schools Superintendent Boyd Brown presenting a organizational chart at the SBPS Board of Education meeting on Feb. 25. 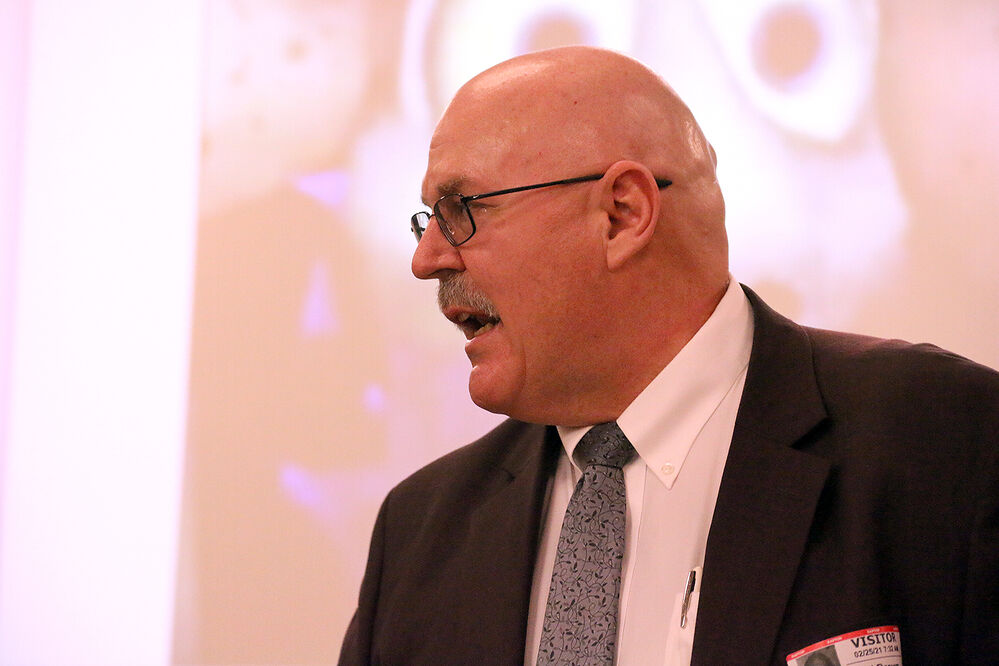 Brown is the last of four finalists vying for the Scottsbluff Public Schools superintendent position. The SBPS Board of Education spent the week interviewing candidates — all with deep roots in Nebraska and Eastern Wyoming — as they seek to replace Rick Myles.

Wendy Kemling-Horner is used to the hot seat.

Myles will depart the district in June. After Myles announced his retirement in December, the Board of Education launched into a two-month search that culminated with Brown’s interview on Thursday night.

Brown's career has run the gamut in Wyoming.

He earned a Bachelor of Science in physical and health education at University of Wyoming in 1987. During his interview, he told the school board that he also played football at Wyoming. He began his career in education in 1988 as a physical education instructor at Campbell County High School in Gillette, Wyoming.

Later that year, Brown moved over to the elementary school and became the physical education instructor at Cottonwood Elementary in Wright. After a brief stint as an assistant principal in another district, Brown became associate principal of Campbell County High School.

In 1998, he became the principal of the same school during a serious time for the district.

“We had a teacher who was having an affair with the principal of the high school,” Brown told the Star-Herald, referencing former Campbell County Math Teacher Cheryl Trover.

In 1998, Trover murdered her husband and kidnapped her children. She was arrested later that year.

“In the middle of the year in December, they asked me to take over the high school principalship,” he said.

In 2018, Brown flew south to Cheyenne and became the superintendent of Laramie County School District 1. Despite earning the Wyoming Superintendent of the Year award in 2017, Brown announced in November of 2020 he’d resign. The Wyoming Tribune Eagle reported that Brown said he was stepping down because of a recurring cancer diagnosis.

After receiving a clean bill of health later that year, Brown said he wasn’t ready to retire yet.

“So the job in Scottsbluff opened up and it’s fairly close to where I live in Cheyenne,” Brown said. “It’s a good school district. So I thought I would go ahead and apply for the job.”

During his interview on Thursday, Brown was asked a question about his stance on white supremacy.

School Board Member Lori Browning, who asked the question, prefaced the question by referencing comments Brown made in the past. In 2019, Brown was asked three times to denounce white supremacy while attending a community meeting in Cheyenne. Each time he did not. Each time, he did not. Questions of discrimination in the district had come up after flyers described as homophobic and racist were distributed at a Cheyenne junior high.

“To blanket say we’re not going to allow one thing or another is almost ineffective at times,” Brown is quoted as saying in a story by the Wyoming Tribune Eagle. “I want us to be able to be as inclusive as we can, and sometimes, it’s teaching those people when they come in and do those things too.”

When Browning asked Brown if he’d denounce white supremacy in his interview on Thursday, he gave a similar answer.

The school board went into closed session at the end of the interview to ask Brown additional questions. The board cited the potential for harm to a person's reputation as its reason for going into executive session. Brown is the only candidate that the board has gone into executive session with this week.

After two years of sitting on the same show to introduce the renovated auditorium, Gering High School students are ready to show exactly what …

St. Agnes Catholic School had to change a lot of its typical fundraising activities this year, including one of their largest and community fa…

The City of Scottsbluff, Scottsbluff Public Schools and YMCA are making waves.

Inspired from her role as the Fairy Godmother when she was in high school, vocal music teacher Nikki Bunnell will make her director debut this…

After months of rehearsal, students in the Scottsbluff High School musical  finished their eight-show run in five days on Saturday.

Students ‘get the jab’ at WNCC

For Brian Bruxvoort, getting the COVID-19 vaccine was an easy decision.

Western Nebraska Community College is hosting a memorial for two fallen aviation students on Saturday at the Elks Lodge in Sidney.

SIDNEY —WNCC Aviation students Yemin An, 21 of Seoul, South Korea, and Zhaoxin Chen, 24 of Xi'an, China, were identified Monday as the two stu…

While school activities are still happening, the impacts of the pandemic have presented a challenge for Scottsbluff High School students compi…

Laramie County Public Schools Superintendent Boyd Brown presenting a organizational chart at the SBPS Board of Education meeting on Feb. 25.