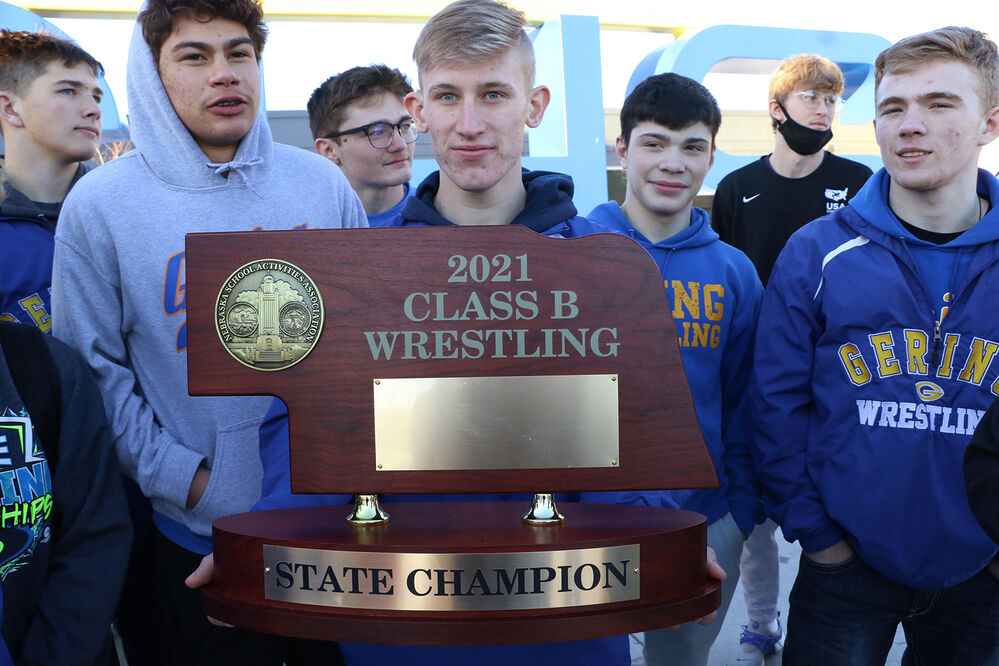 Gering's Paul Ruff holds up the trophy the wrestling team earned for winning the Class B state title during a homecoming celebration on Sunday, Feb. 21. 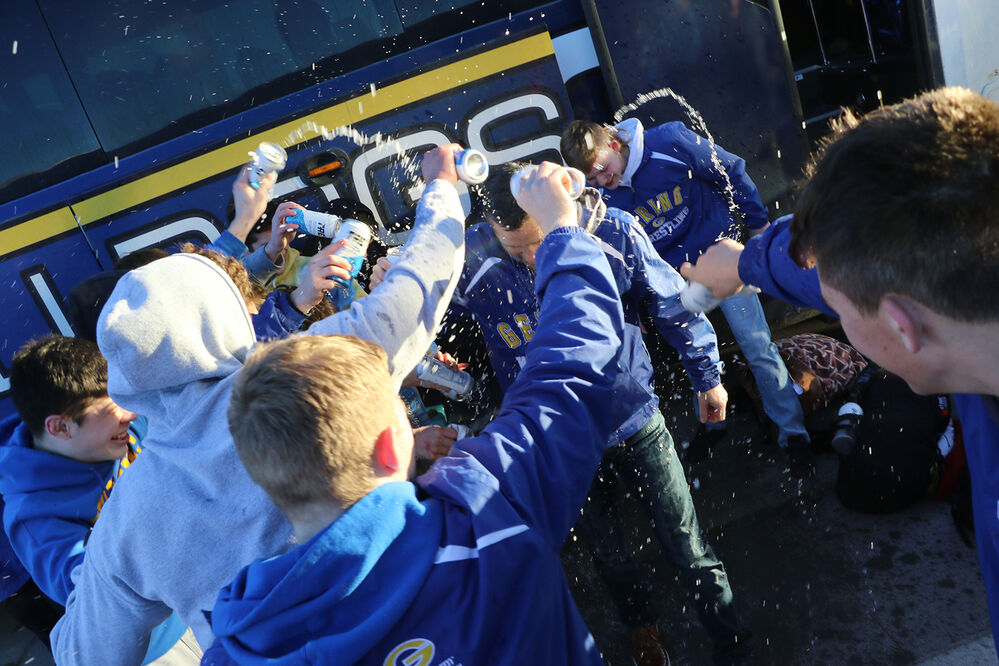 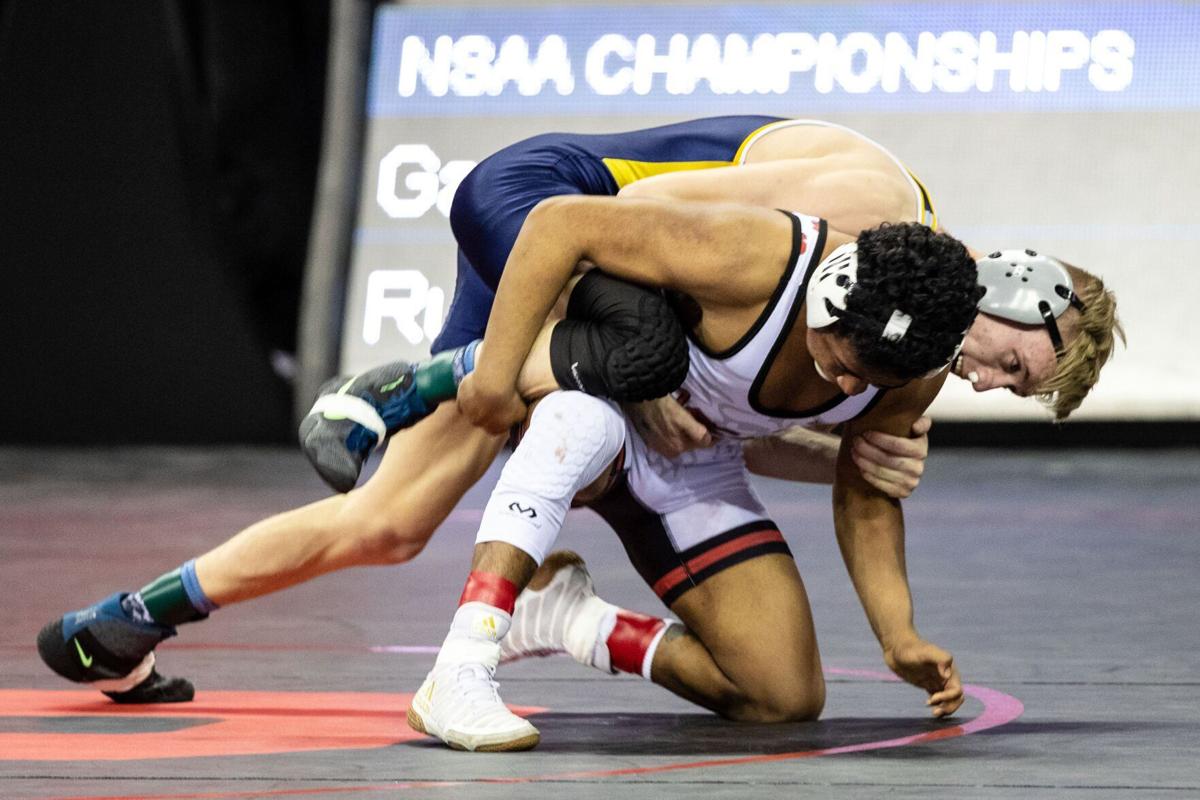 Gering's Paul Ruff, top, wrestles, Scottsbluff's Paul Garcia during the Class B 126 pound championship match. Gering walked away with the team title, scoring more points than others in Class B.

The Bulldogs won the state title without an individual champion, a feat that hasn’t been achieved in at least 30 years. The NSAA records online only date back to 1991.

Scottsbluff’s Paul Garcia also made history with his fourth state title with a win over Gering’s Paul Ruff at 126 pounds.

Gering’s Nate Rocheleau, a defending state champion, said it felt great to be able to take home the team trophy.

“I think the team title does feel a little bit better,” he said. “The individual title is nice, but the team winning goes to show that there wasn’t just one or two of us who was willing to work hard. It’s our program as a whole.

“It made me feel good to know that Gering’s back. We were in a slump for years, but we’ve gotten ourselves back to where we need to be. And, I hope that’ll carry on in the future.”

Gering took six wrestlers into the semifinals on Saturday, Feb. 20 with a 12.5 point lead in the team standings over Beatrice.

The semifinals proved to be rough on the Bulldogs.

“I was extremely frustrated with myself in the way I wrestled in that match,” Rocheleau said. “I didn’t really have time to sit there and be sad about it. We had the team title to worry about, and we all had to get ourselves together.”

No. 1 ranked Waverly’s Evan Canoyer 3-2 edged out Gering’s Jacob Awiszus, who went into the match ranked No. 2 by the NSWCA. Sophomore Ashton Dane finished second at 106 pounds, falling 6-0 to Aurora’s Caden Svoboda.

Ruff faced Garcia in the all-Twin City final at 126. A win by Ruff would have sealed the team title easily for Gering, however, Ruff ended up losing 1-0 on a caution for improper knee placement, giving Garcia his fourth state title.

Going into the semifinals, Ruff said he wasn’t too nervous because the team title was pretty much wrapped up by then.

“We were ahead, but we knew a loss could cost us. We all had tough semifinals matches,” Ruff said. “There wasn’t a 100% guarantee each of us were going to win them. We all battled hard. We knew we had to come back strong.”

With Ruff’s loss in the controversial match, title status for Gering became dependent on how other teams fared at the state championship.

Beatrice gained little ground in the semis needing a miracle to even pull off a tie with Gering. Gering’s team championship was sealed when Waverly’s Evan Canoyer won 9-3 over Beatrice’s Torrance Keehn at 170.

Rocheleau said he thinks the team title is indicative of where the Gering wrestling program is heading.

“We’ve been with these kids for multiple years, and they know how to work hard. We’ve instilled everything that we could possibly want them to carry on to the next set of wrestlers. I’m confident that Gering will be doing well for years,” he said.

The team title wouldn’t have been possible without the guidance of Berger, Rocheleau said.

“He was a major part of it. He remembered a time when Gering was great, and he wanted to push us to get back to that. Just having the coaching staff that we did made all the difference,” he said. “You could just see or hear when he (Berger) talked about it, how much he cared about Gering wrestling, and how much he wanted us back to where we were. That kind of motivated everyone to push themselves a little bit harder every day.”

Ruff, who transferred to Gering before his junior year, said he is thankful to have been part of a historic win for the school.

Berger gave all the credit to his team.

“When I took the program over four years ago, we had just a couple of good guys to build around. We just kept adding to it every year. The kids improved and worked hard and did things in the summer,” Berger said. “All of that work outside of the season helped us to win a team title.

"This was truly a team battle. We had no (individual) champs. This was kind of the hard way.”

Berger said being a former Gering wrestler makes the win that much sweeter.

“It means the world to me,” he said. “I love coaching these kids. I really enjoy watching them grow and develop into great wrestlers and great people. As a former Gering wrestler, it is great to see the program from top to bottom back where we can contend for titles each year. That’s how it was when I was growing up, and we intend to keep the great tradition going.”

Gering wrestler Paul Ruff talks about the tough loss he experienced at the state wrestling championship, the team win that lessened the sting and his goals to wrestle in college.

Gering's Paul Ruff holds up the trophy the wrestling team earned for winning the Class B state title during a homecoming celebration on Sunday, Feb. 21.

Gering's Paul Ruff, top, wrestles, Scottsbluff's Paul Garcia during the Class B 126 pound championship match. Gering walked away with the team title, scoring more points than others in Class B.