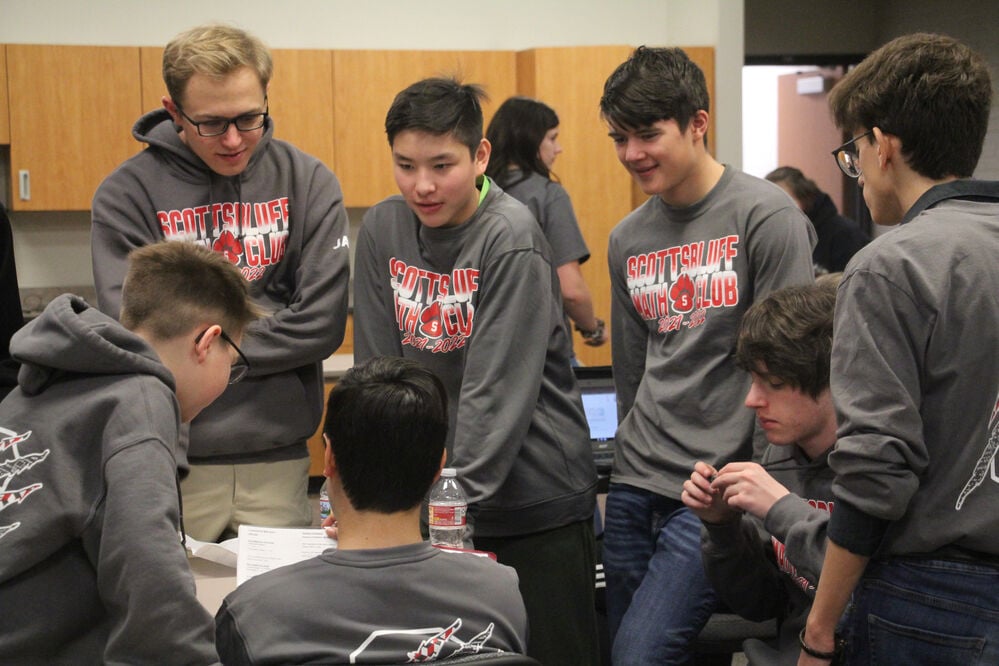 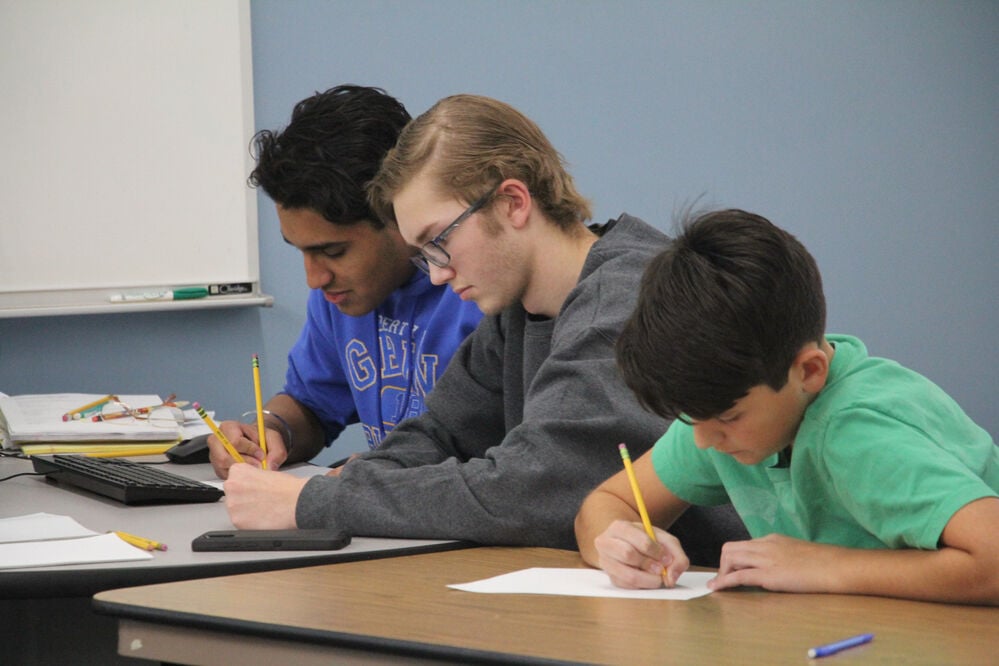 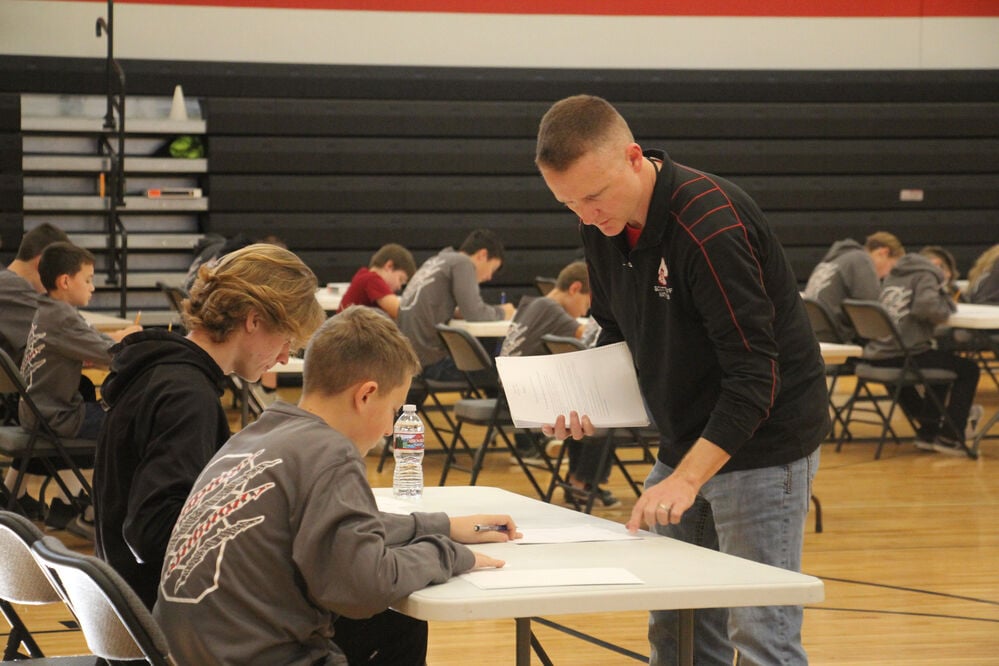 Scottsbluff math coach Shelby Aaberg helps students make sure they've bubbled in their names and schools correctly before the PROBE I exam.

Across the state of Nebraska, high school students battled in a tournament of wits. The 32nd annual Nebraska Math Day was held on Dec. 2. For the second year in a row, it was held virtually.

The majority of Math Day is based around Math Bowls. Teams from 43 schools statewide, including Scottsbluff High School, Gering High School and Bluffs Middle School, participated in these competitions.

“It’s kind of some pressure and stress but it’s really fun ... and once you buzz in and get it right, it feels really good, especially when we’re playing against high schoolers and we’re middle schoolers,” Harrison Maser from Bluffs Middle School said.

He, alongside his twin brother Jacob Maser and fellow eighth-grader Landen Heine, were some of the only middle school students participating. A few weeks ago, they went to a math competition in Omaha and won first overall.

“It’s a lot of thrill,” Heine said. “Kind of like football games without pushing.”

The Math Bowls were divided into competitive and recreational contests. Each featured a list of 12 complex questions, which two teams vied to answer. They need to respond within 30 seconds. The margin of victory matters, as more points are awarded for blowouts than close matches.

The questions are exceedingly difficult. Examples include “What is the domain of the function h of x = the fifth root of x squared - 4 over 2x + 5” or “When 270 is divided by the odd number n, the quotient is a positive prime number and the remainder is 0. What is n?”

It is relatively common for neither team to get the right answer. Every team gets a minimum of five games in the tournament.

“There are a lot of different types of problems, but they’re really recognizable once you know what to look for,” Mentgen said. “We’ll practice over and over until we get a good understanding of how to solve them.”

In previous years, the competitors would travel to Lincoln for the Math Bowls. This year, like in 2020, everything was conducted via Zoom. It wasn’t the same experience as an in-person tournament, Mentgen said. But he did like that the teams could brainstorm with each other out loud instead of whispering.

The Math Bowls weren’t the only aspect of Math Day. There was also the hour-long Problems Requiring Original Brilliant Effort, or PROBE I, exam. It’s a 25-question, multiple choice exam.

Four points are awarded for a correct answer, one for no answer, and zero for a wrong answer. The 50 kids statewide with the highest score will be selected to advance to the PROBE II written exam in Lincoln.

Around 45 students in Scottsbluff, and 13 in Gering, took the exam. Only a few participated in the Math Bowls, with their classmates cheering them on.

“We’re very thankful to be able to compete,” Gering coach Amanda Cochran said. “(...The students) are digging it and love competing.”

Gering’s two teams had six wins, two losses and two ties between them during the tournament.

Scottsbluff’s recreational teams went a combined 18-2, with three teams sweeping their contests and finishing first, second and third in the overall recreational standings.

Their competitive team placed either third or fourth overall, dependent on an official head-to-head ruling from the University of Nebraska-Lincoln.

Around 20 more pairs of little feet will be walking the halls of Geil Elementary School next fall. The Gering Board of Education passed the ex…

Scottsbluff junior Michael Mickey was one of 200 JROTC cadets out of 1,300 cadets from across the country to have been selected for a scholars…

Parents have choices for child care in Scottsbluff/Gering

Caring for a young child can be challenging; caring for several, even more so. Yet for dozens of local residents, it’s exactly the type of job…

After exceeding its COVID threshold, Minatare schools will be masking for at least two weeks.

After narrowing down applicants during a special meeting on Jan. 5, the Morrill Public Schools Board of Education will interview Barry Schaeff…

Robin Stevens, the current District 7 representative on the Nebraska State Board of Education (SBOE), has announced that he intends to run for…

After a day-long public hearing with a packed audience, the Gering Public School board voted to terminate the contract of high school principa…

Despite rocky starts, students look forward to the rest of speech season

There is only one high school activity that can bring an abridged version of America’s history, a race to $2 million and a redneck truck stop …

Scottsbluff math coach Shelby Aaberg helps students make sure they've bubbled in their names and schools correctly before the PROBE I exam.