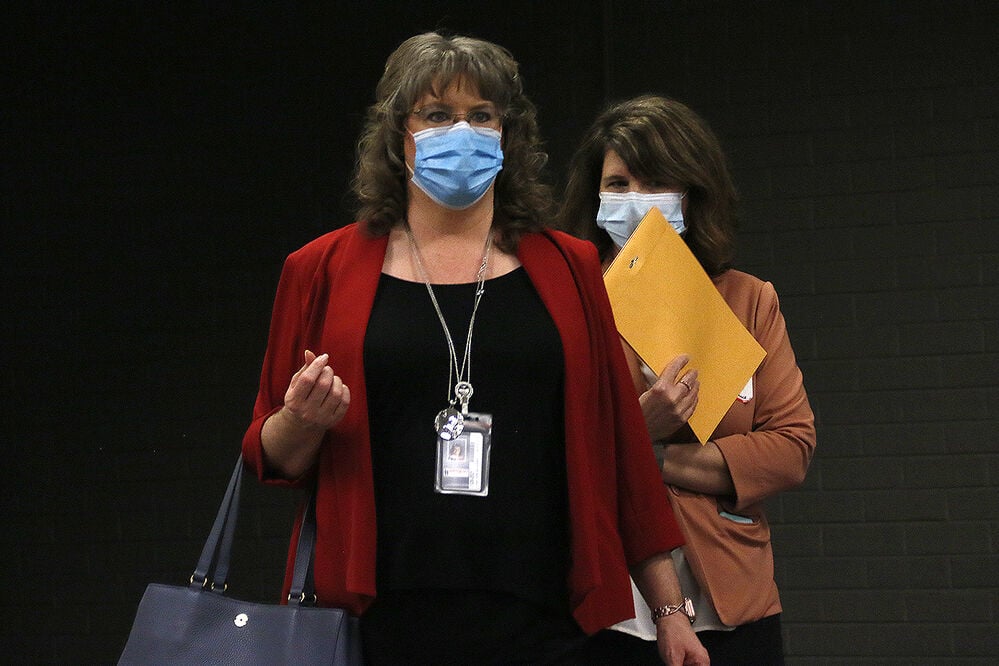 Executive Director of Student Services Wendy Kemling-Horner (front) walking into the SHS Boardroom on Wednesday. Kemling-Horner is the thrid finalist for the SBPS superintendent position. Behind her is Shari Becker, the director of search services for the Nebraska School Board Assocation. 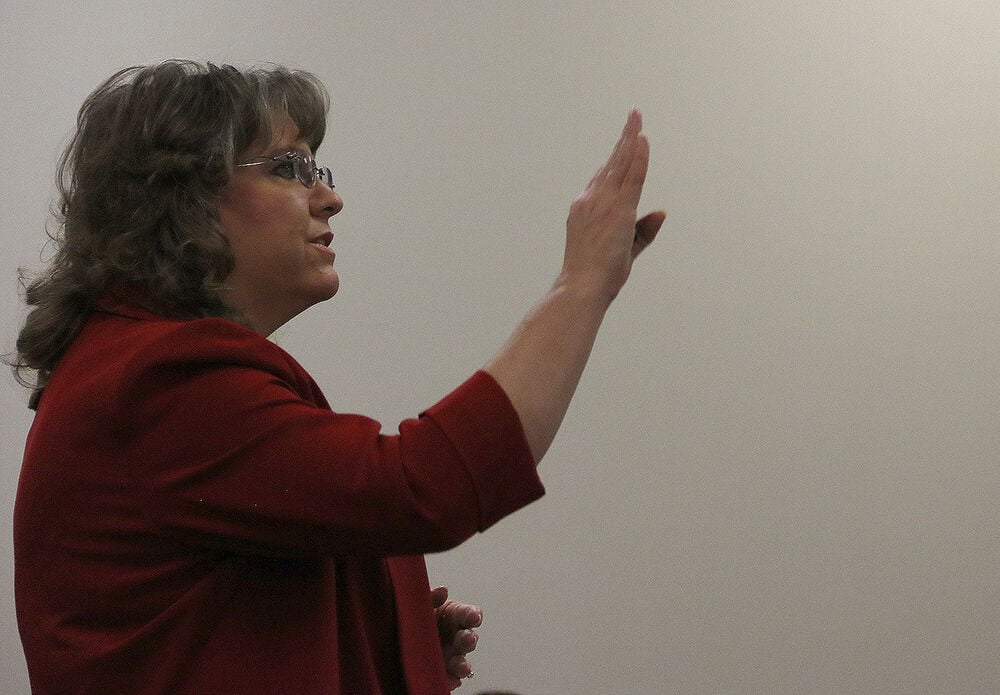 Executive Director of Student Services Wendy Kemling-Horner presenting to the Board of Education on Wednesday. Kemling-Horner is the thrid finalist for the SBPS superintendent position.

Wendy Kemling-Horner is used to the hot seat.

Month after month, Kemling-Horner is a mainstay in the Board of Education meetings, presenting policy changes and answering the school board’s questions.

Now, Kemling-Horner is looking to move up the ladder. She is the third finalist interviewing for the Scottsbluff Public Schools superintendent position.

“I believe you know everyone here,” School Board president Ruth Kozal said, jokingly, as she introduced Kemling-Horner.

Kemling-Horner is one of four finalists looking to replace Rick Myles. Myles announced his retirement in December after 11 years as superintendent.

This interview, along with the others, comes as the district grapples with the immediate effects of COVID-19. The coronavirus has caused teachers and staff to sit out various times throughout the year.

If she gets the job, Kemling-Horner would not have to go far. For the last 15 years, Kemling-Horner has held the title of executive director of student services. She has been in the position longer than the retiring superintendent.

Kemling-Horner told the school board that after 15 years with Scottsbluff Public Schools, she feels applying for the position was the right move for her.

Her department oversees programs like the after-school, Sixpence and preschool programs. She also supervises some of the district’s federal responsibilities like Title I and Title IX. Before 2006, Kemling-Horner was the joint special education director for Bridgeport and Bayard Public Schools for a year.

Kemling-Horner is also in the process of completing her doctorate in education from the University of Nebraska-Lincoln. Her estimated graduation date is May 2021, according to her resume. She holds a Masters of Art in special education from Regis University and a Bachelor of Science in mathematics from Colorado State University.

On Wednesday, Kemling-Horner pitched her vision for SBPS from a bottom-up approach. When asked what she would need in terms of leadership, Kemling-Horner pointed to the staff. She said janitors, school nurses, teachers, and paraprofessionals, for example, were critical staff for a successful superintendent.

She also said that communication would be a priority of hers. She added that it was important to keep the school board on the same page and not give one member information without giving information to all.

She added that communication was also critical when addressing the community and staff when making unpopular decisions.

“When you have an unpopular situation, people have to understand why,” she said.

During her interview, Kemling-Horner also told the board about difficult professional decisions.

“One of the hardest decisions I ever made was moving from the classroom into an administrative position,” she said.

She said she wasn’t sure that she wanted to make the transition but was convinced because she felt she could make a bigger impact in students’ lives as an administrator.

His interview will be held in the Scottsbluff High School Boardroom and begins at 5 p.m. That meeting, like all the interviews, is open to the public.

Executive Director of Student Services Wendy Kemling-Horner (front) walking into the SHS Boardroom on Wednesday. Kemling-Horner is the thrid finalist for the SBPS superintendent position. Behind her is Shari Becker, the director of search services for the Nebraska School Board Assocation.

Executive Director of Student Services Wendy Kemling-Horner presenting to the Board of Education on Wednesday. Kemling-Horner is the thrid finalist for the SBPS superintendent position.