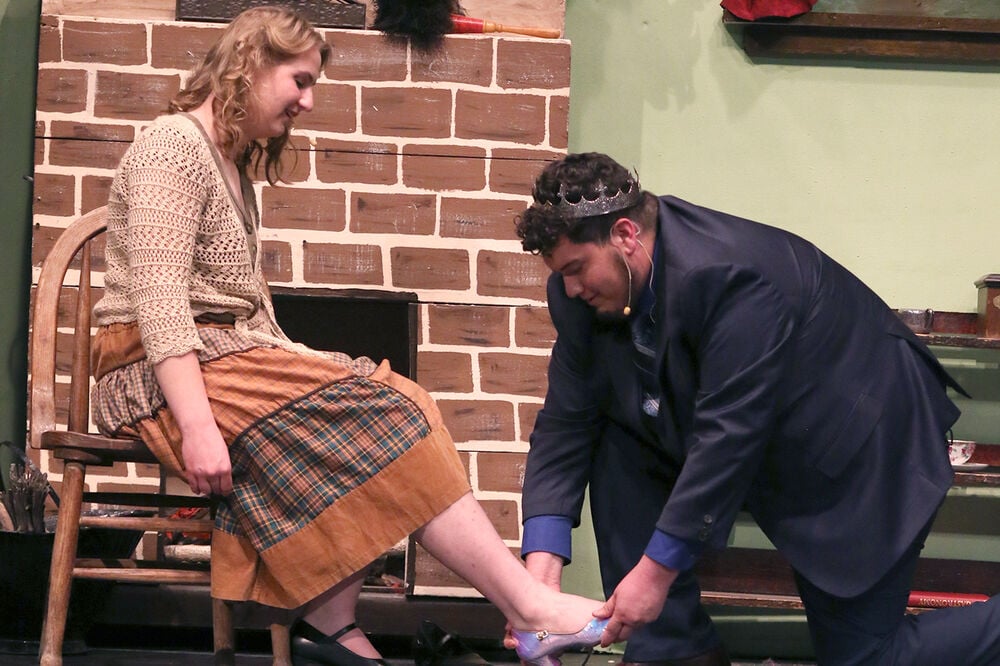 The prince (John Plascencio) fits the shoe onto Cinderella's (Allison Cotant) foot. It's a perfect match. 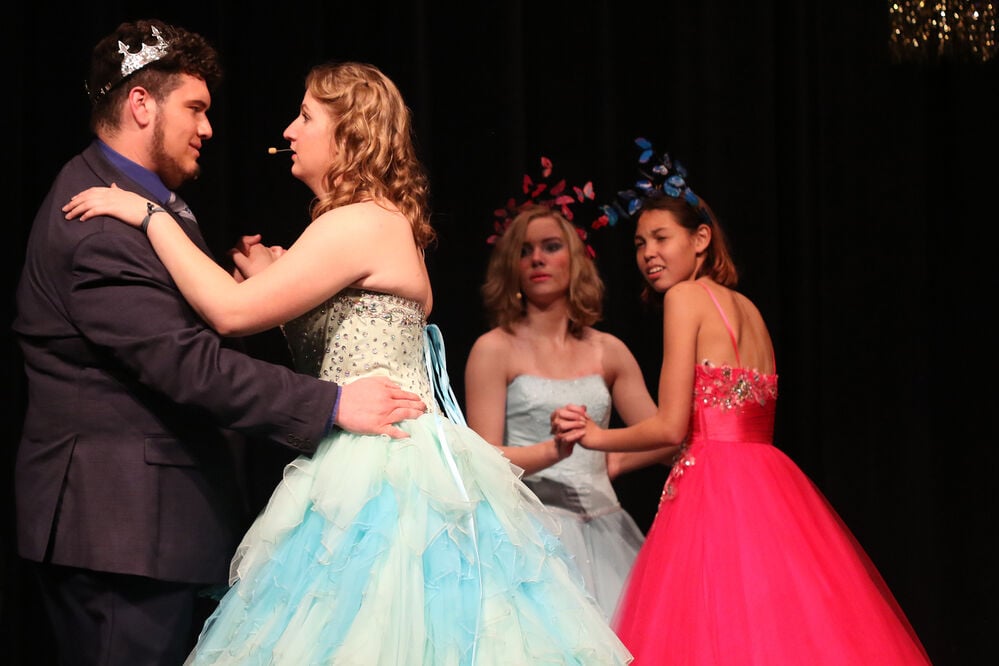 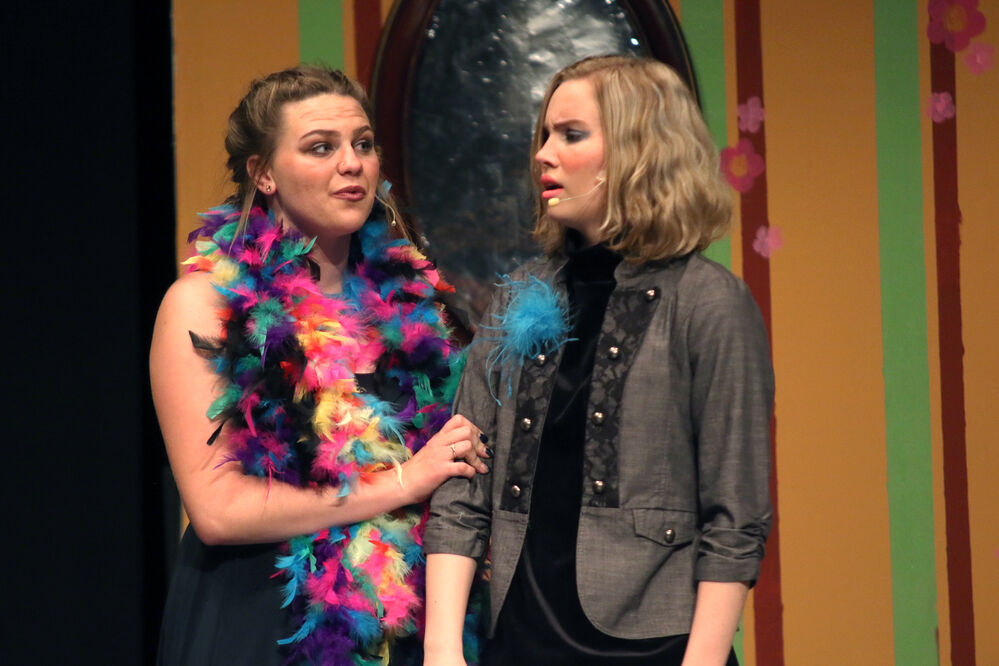 Cinderella’s stepmother (Makayla Suttles) offers one of her daughters (Ella Anderson) to try on the glass slipper after the prince shows up on their doorstep trying to find its rightful owner.

With opening night right around the corner, junior high mice and high school peasants are readying themselves for a magical ball on the Mitchell High School’s auditorium stage this weekend.

Mitchell High School will be presenting “Cinderella” Friday and Saturday with a Sunday matinee for its spring musical.

Director Nikki Bunnell said the week of the show has been a little crazy putting last minute touches on sets and tightening up lines, but she’s excited to put on her first show as a director.

“I feel like a crazy person running around trying to keep track of everything,” she said after a full dress rehearsal Tuesday night. “But you know, I’m enjoying just the time with the kids and getting them more confident on stage and the opportunity to perform. I love that.”

Co-director Cassie Wiegel, who’s helped with the past two musicals before “Cinderella,” said she’s enjoyed her time with the students as well. Mitchell does a musical every other year. She’s particularly proud of those who have stepped to take the place of last year’s seniors.

“Several of the kids are cast as the same character again. But they’re like, ‘I don’t remember this theme.’ And then it clicks, and it comes back to them. So, it’s fun to work with them,” she said in a previous Star-Herald interview. “And, it’s fun to see the new kids that have stepped up and filled the shoes of the seniors that we lost from last year.”

Both cast and crew are excited to put on a show for the public, especially after missing out on last year’s production. While the week of the show has been hectic, they have shared their confidence in each other’s abilities.

“We do have a lot of fun. I feel very positive — it’s not like anybody’s stepping on anybody’s toes, which I feel like can get in the way sometimes in high school, but we are definitely very positive,” student crew manager Frankie Hughson said. “We all work well together. We also butt heads every once in a while, but as a general rule, we all work extremely well together.”

Allison Cotant, who plays Cinderella, seconded that sentiment, saying that being in musical is like being a part of one big family.

It’s been really tiring, but like completely worth it,” she said. “The way we become a family, spending so much time together, you build these relationships that there’s no way you’ll lose them.”

Showtimes for “Cinderella” are Friday, May 7, and Saturday, May 8, at 7 p.m. and Sunday, May 9, at 2 p.m. at the Mitchell High School auditorium. Tickets are on sale at www.showtix4u.com/events-details/51143.

The Western Community College Area Board of Governors formally accepted the resignation of President Carmen Simone during its Wednesday, June …

The district board of education earlier this month approved nine resignations, many of which were solely because of the mandate, said Superintendent Todd Chessmore.

With 105 characters played by only four actors, one can only imagine how crazy a show like “Alfred Hitchcock’s The 39 Steps” would be. Yet, di…

In April, UNL asked a federal judge to dismiss the case, which alleges insufficient responses into sexual misconduct and harassment.

The Biden administration has announced a strategy to combat the threat of domestic terrorism, a plan developed with the help of a new counterterrorism program headquartered at UNO.

University of Nebraska President Ted Carter said the university will emerge from a pandemic year ready for what comes next, which is reflected in a $1 billion budget to be considered by the Board of Regents.

Institute officials say the webinars provided a safe and welcoming forum for educators to discuss racial issues and that the content was “anti-racist” but not critical race theory.

The prince (John Plascencio) fits the shoe onto Cinderella's (Allison Cotant) foot. It's a perfect match.

Cinderella’s stepmother (Makayla Suttles) offers one of her daughters (Ella Anderson) to try on the glass slipper after the prince shows up on their doorstep trying to find its rightful owner.