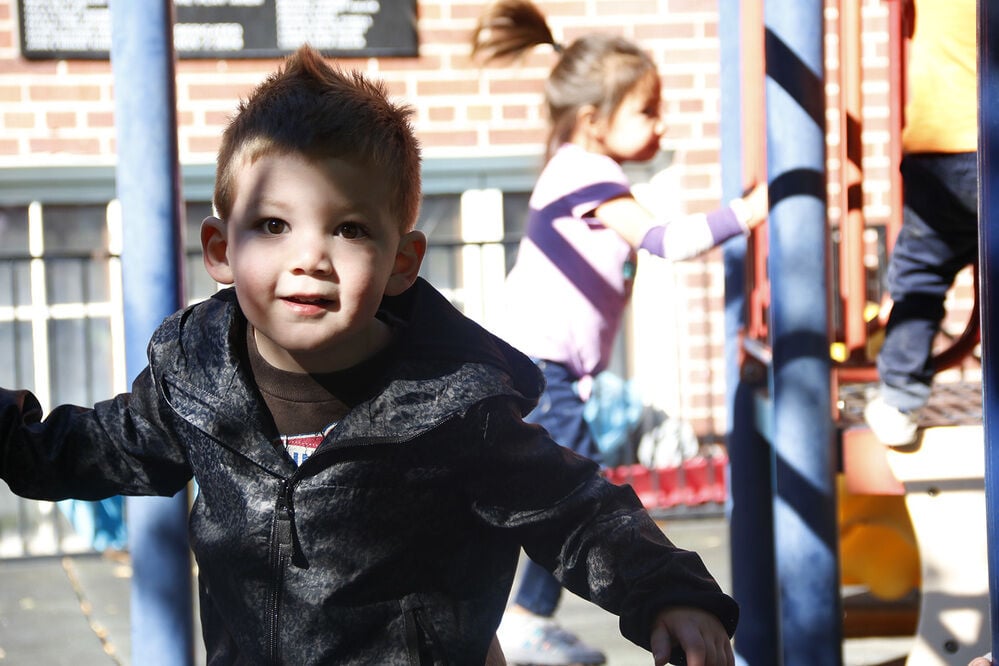 A child circling the playground at Kids First in Scottsbluff on Sept. 28, 2020. 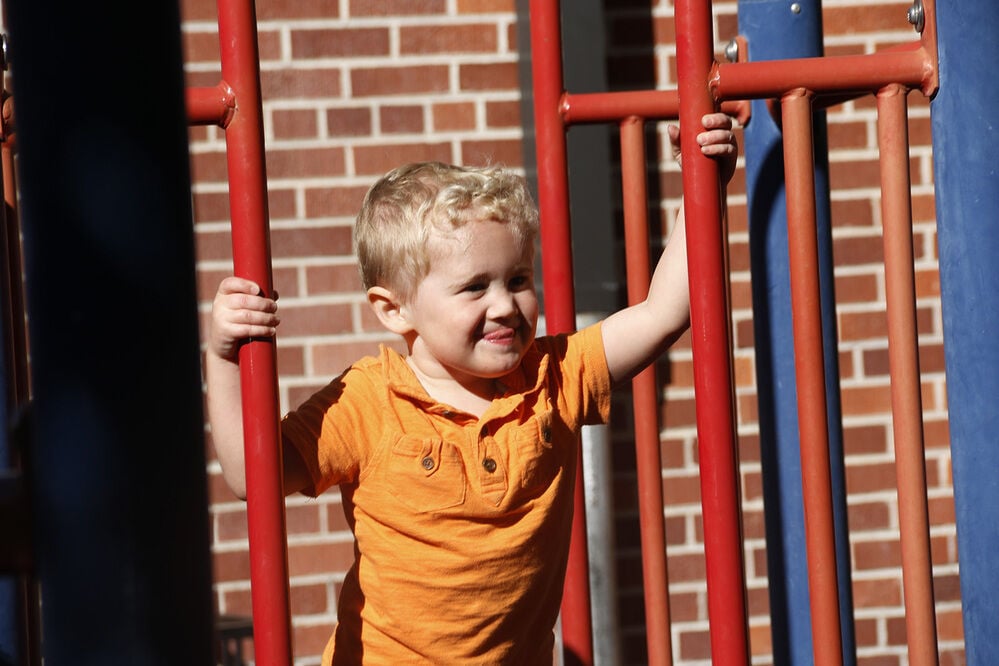 A child climbing the playset at Kids First in Scottsbluff on Sept 28, 2020. 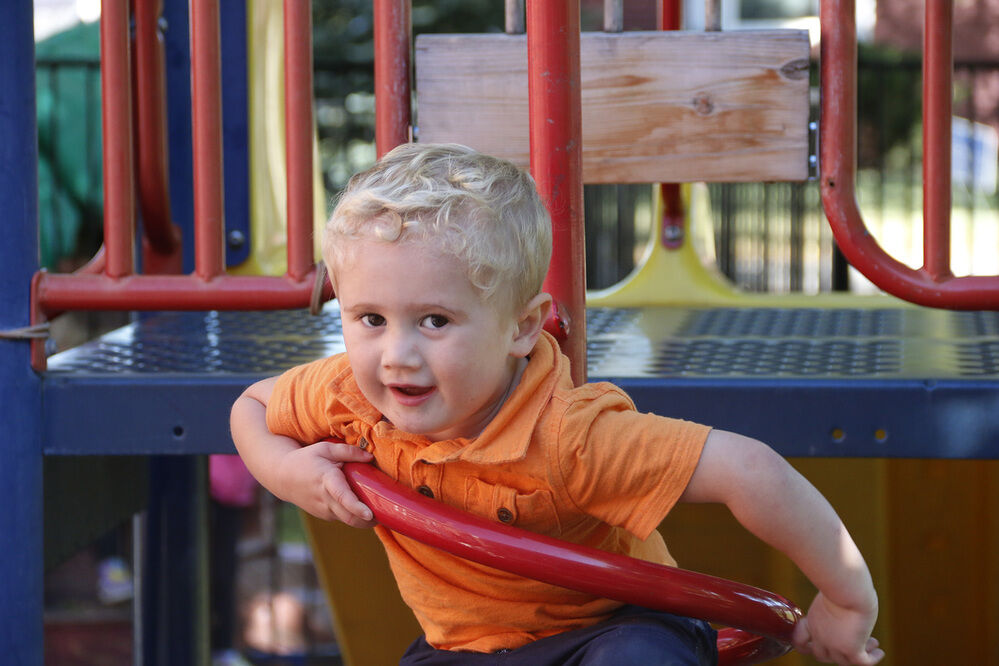 A child at Kids First climbing the playset in Scottsbluff on Sept 28, 2020.

The last 11 months has been a rollercoaster for JoAnne Golden’s childcare center.

When Nebraska began shuttering schools and businesses in March 2020 to prevent the spread of the coronavirus, Golden Child Development Center in Mitchell gave its employees a choice. They could keep working or they could go home.

A few staff left, Golden said, mostly for health reasons. Others chose to stay. However, as many parents began working from home, Golden’s revenue plummeted by about half.

Golden Child Development Center has a capacity for 50 children, according to its licensing details. Golden said that, on some days, she had just five children in her building.

A newly released Unicameral study suggested that Golden’s experience is commonplace. In some ways, she’s one of the lucky ones.

Since the pandemic began, 231 licensed providers across Nebraska closed permanently, according to the study. Hundreds more shuttered temporarily and just over half who responded to a survey reported that they would close permanently without further financial assistance from the government.

In Nebraska — a state that ranks highest in the nation for children with all parents working, according to the U.S. Census Bureau — the pandemic’s effect on the childcare industry has some lawmakers concerned. That includes Gering’s state Sen. John Stinner.

“Ensuring all families and children have equitable access to affordable, high-quality care is key to both the healthy growth and development of Nebraska’s children as well as the economic vitality and prosperity of communities and the state,” a resolution introduced by Stinner in 2020 said.

Stinner’s resolution, LR 390, created and funded the study. It also brought out dozens of industry experts who testified that the pandemic had negatively impacted the childcare industry and, without further financial assistance, the industry would continue to suffer.

The study also revealed that 12 counties in Nebraska have no licensed child care providers. That includes Arthur, Banner and Sioux counties.

For those childcare businesses that have sustained the pandemic, COVID forced them to make difficult choices like laying off staff. At Golden Child Development Center, layoffs weren’t implemented.

“I’m a little bit more established which I think made a difference,” Golden, who’s operated her business for two decades, told the Star-Herald.

Kids R Us in Scottsbluff is another example of a center impacted by the pandemic. The owner, Danielle Self, said she closed her business for a week in March. At that time, she had about 105 kids in her program with 33 staff members. When she opened a week later, she had 45 kids in the program. She also reduced her staff down to eight.

Since March, Self’s staff rebounded some in the following months. As of February 2021, Self said she has 16 staff and is operating at about 50% with about 60 students.

“I think that’s the new normal,” Self said. “I’m hoping we’re still going up (with enrollment). I need to peak and then see if we can maintain the peak.”

Over the pandemic, Self and Golden said their income dropped by 50%. They’re not alone. The legislative study, which included survey data from the Buffett Early Childhood Institute, found that about 25% of childcare providers’ incomes plummeted by half.

Self and Golden attributed their income decline to parents staying home.

“My child had to go to the family farm,” a Dawes County parent who responded to the survey wrote. “Which then, we, his parents, could not see him daily since we had to work and commute.”

Mendoza said her clientele was made up mostly of essential workers.

“When you have my hours, 90% of my parents are essential,” Mendoza said.

Still, Mendoza said that grants she received in March were critical to staying open.

“That first week in March, we were closed for two weeks. And so that (grant) covered tuition,” she said.

Going forward, Mendoza thinks her business will be OK.

“But if there is another outbreak and they make us shut down again, I think it’ll definitely impact things because you can’t apply for those grants again,” Mendoza said.

In fact, the legislative study said that nearly 90% of providers would take advantage of additional financial aid if it was offered.

Lawmakers, at least on the apportions committee, agree.

The study also came with recommendations to bolster the childcare industry amid the pandemic and beyond. Specifically, the Appropriations Committee recommended that the state explore and evaluate financing options and consider fully funding the childcare and education system.

That is a $911 million task, according to the Buffett Early Childhood Institute, about half of which is already funded.

For some, however, the drive to start a child care center is more personal.

Jill Wilkins started Kangaroo Court in Scottsbluff two and a half years ago.

“I had a surprise-child,” Wilkins said. “So I put her in daycare and my paycheck kind of went to daycare.”

Wilkins, who has a background in early childhood education, decided to start her center. Within the first few months, her business rapidly grew, allowing her to expand. Like the other childcare centers, Wilkins’ Kangaroo Court shuttered in March. She said they had just three students and it wasn’t cost-effective to keep the doors open.

Like the other centers, Wilkins’ enrollment has begun to rebound, although not to the levels she saw pre-pandemic. To get there, Wilkins said she had to dip into her savings.

While lawmakers in Lincoln debate a fully-funded childcare system, centers in Panhandle told the Star-Herald they’re settling into a new normal.

The centers also said that support from the community was critical.

GERING — For dozens of Gering kids, their time as a student in Gering Public Schools began Wednesday.

A child circling the playground at Kids First in Scottsbluff on Sept. 28, 2020.

A child climbing the playset at Kids First in Scottsbluff on Sept 28, 2020.

A child at Kids First climbing the playset in Scottsbluff on Sept 28, 2020.