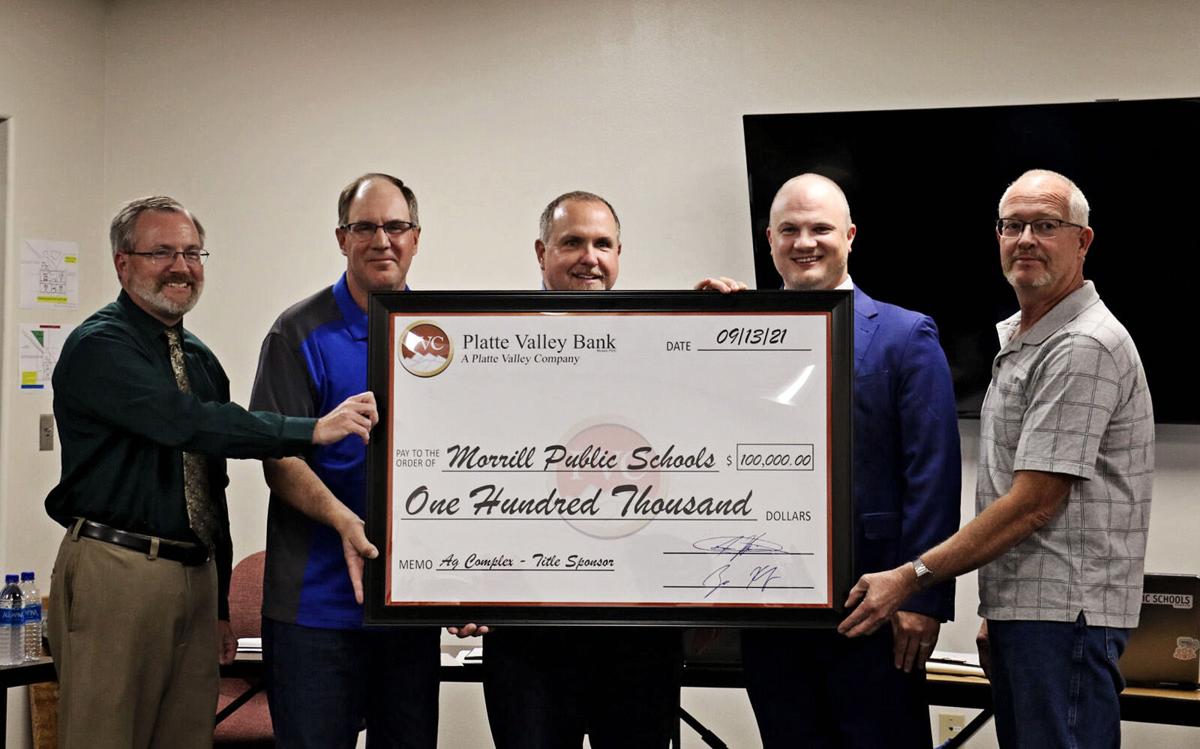 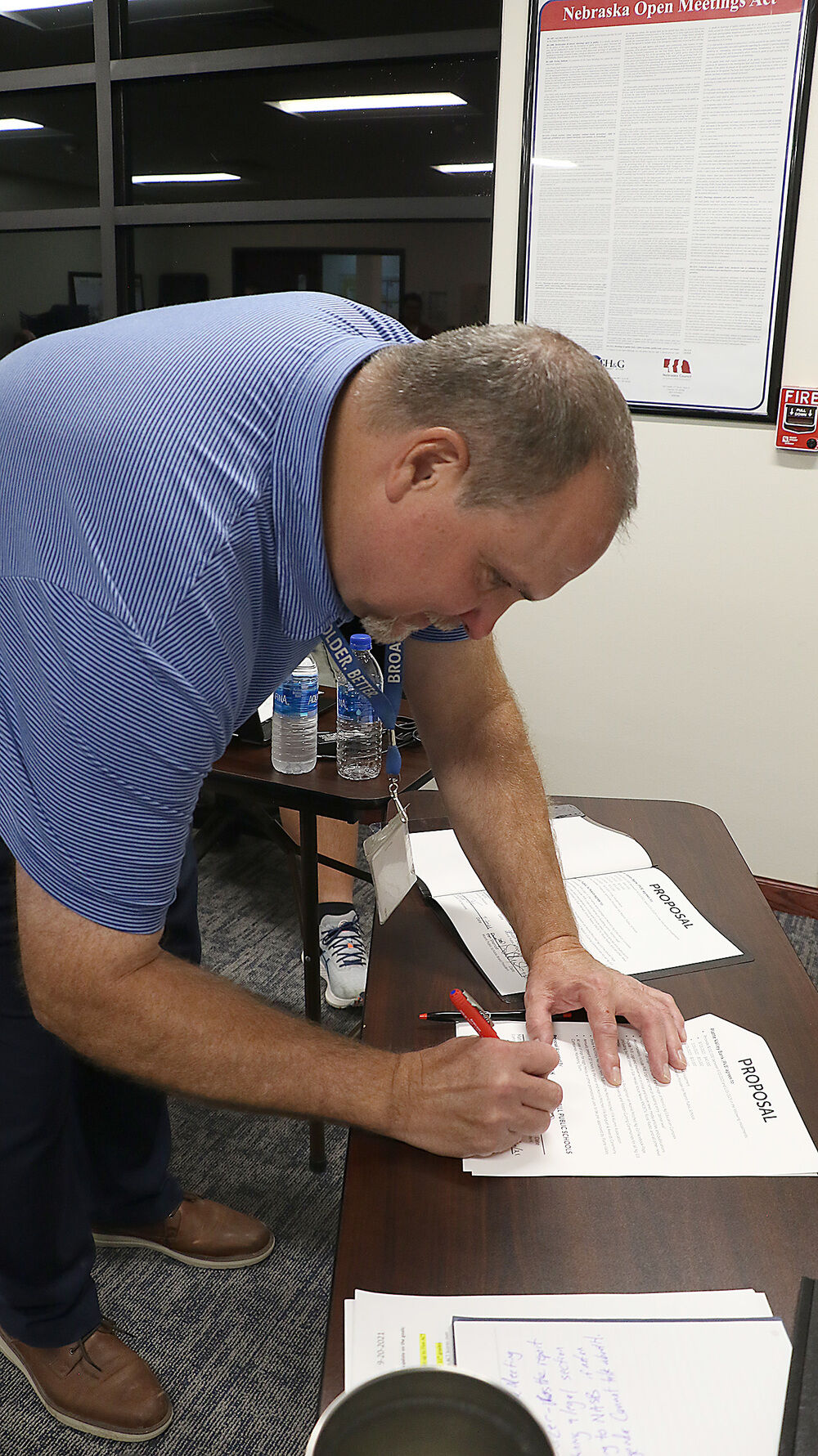 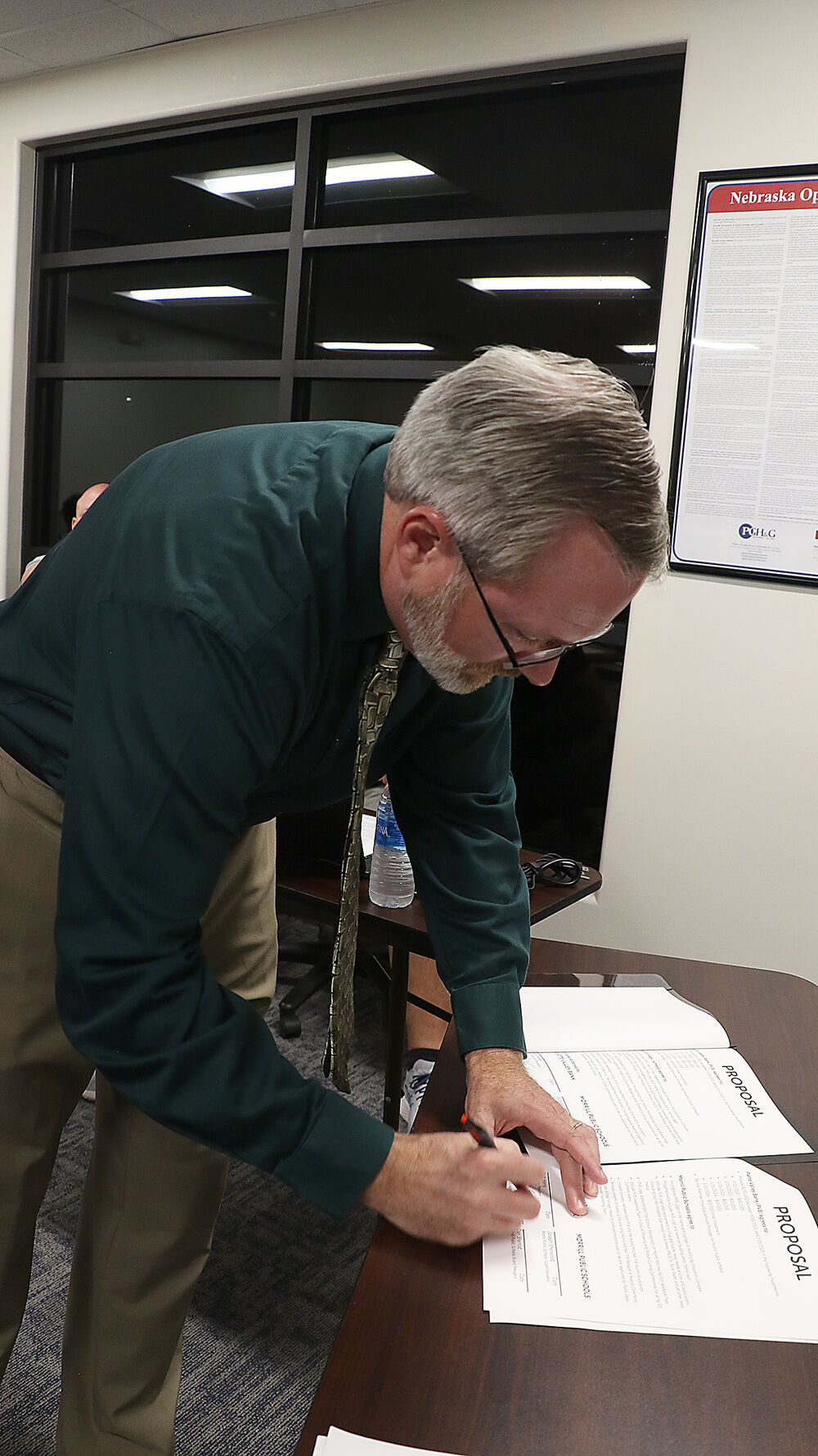 The donation makes PVB the title sponsor for the ag complex that will be built at the old Brownsfield baseball complex in Morrill, which the Village of Morrill donated to the school district through a purchase agreement of $0, aside from closing costs, at the end of March 2021.

Both PVB representatives and MPS representatives signed two copies of the contract, which stated the $100,000 would be distributed to the district over the course of a four-year period: from Sept. 13 to Nov. 15, 2025. The first installment will be $40,000 this year, followed by $15,000 each year after.

“I just really want to express appreciation on behalf of Platte Valley Bank for allowing us to be the title sponsor of the complex,” Karpf, who is also a 1996 Morrill alum, said. “…Our company’s very involved in agriculture, and so this is a real natural fit for us. We’ve been committed to the Morrill community for many, many years, so … it’s kind of a no-brainer that we wanted to be part of this. So (we’re) very pleased to be the title sponsorship, we wish you all the best of luck, us some as the program gets implemented, and especially as the future of agriculture — I think that’s a very exciting part for us to be involved in and understanding that Morrill Public Schools is promoting that in our communities, it’s great to see.”

Currently, the total cost of the project is estimated at roughly $700,000, based on a bid from Russell Reisig Excavation and Construction. The complex was originally estimated at $400,000 in April.

According to Sept. 20 meeting documents dated Aug. 10, the bid was $782,634; however, Sherwood said at the Sept. 20 meeting that Reisig lowered the bid by $85,828 through “value engineering” after a meeting and agreement with the architect.

Approval of the modified bid from Russell Reisig Excavation and Construction, which is now at $696,806, was tabled to the next school board meeting in order to first meet with Mitchell Public Schools to see what role, if any, the district might like to play in the agriculture education complex, which is being built specifically for the Morrill-Mitchell FFA program. That meeting is set for Monday, Sept. 27, Sherwood said.

On Tuesday, the Scottsbluff High School marching band had its practice for the 31st annual Old West Weekend cut short because of lightning.

Geil Elementary transformed into a whole new world Wednesday — well, not a new world, but the world.

“Our staff are just burning the candle at both ends and taking care of each other. We would like to honor the need for mental health for staff and students so we were asking for the 22nd and 23rd” of November off.

Masks may be requested for specific situations by instructors, office managers and unit directors.