Bailey Nikont plays the flute during a weather-shortened practice for the Old West Marching Band Competition on Tuesday, Oct. 12. 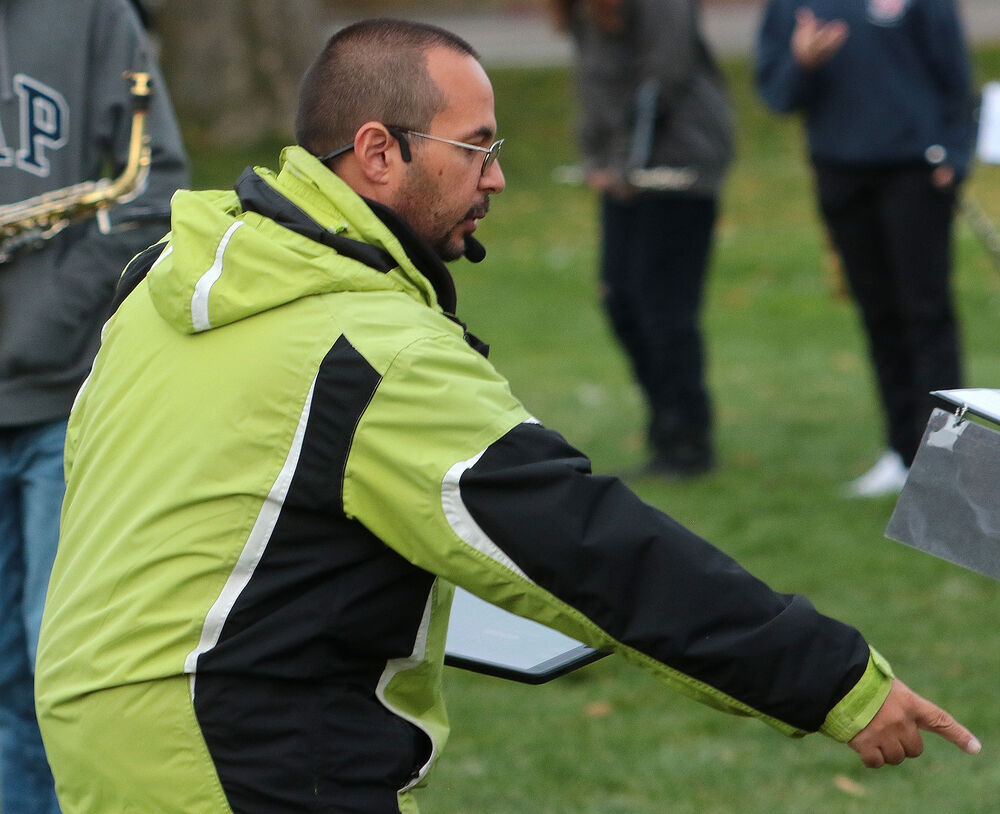 Scottsbluff High School band teacher Frank Ibero gives directions to his students during a practice that was cut short because of the weather on Tuesday, Oct. 12.

On Tuesday, the Scottsbluff High School marching band had its practice for the 31st annual Old West Weekend cut short because of lightning.

The weather, though, didn’t dampen the band’s spirits. After not taking part in last year’s competition, SHS band director Frank Ibero said the students are excited to pound the pavement in downtown Scottsbluff for this year’s Old West Marching Band Competition.

“We’ve talked all year. We’ve tried to remind them all the time just about opportunities, and you never know how many opportunities you’re truly going to get,” he said.

Ibero said he believes his students are ready to seize this opportunity.

“I know they were disappointed last year,” he said of the band’s last minute inability to participate because students were either ill or quarantined due to COVID. “I think they’re excited, but it’s kind of tough to tell. Yesterday was Monday, and Monday is always kind of, ‘What? We’re marching. Where?’ They had a good bit of the Monday fog yesterday. We’ll see what happens. Then, they’ve got a little bit of weather hanging over them here in the next day or two.”

With the distraction from the weather and the upcoming competition, Ibero said he has been working hard to keep the students’ heads on straight.

The biggest challenge for the band members heading into the competition could be the weather forecasted for the rest of the week.

“If the weather’s as cold and windy as it sounds it’s going to be tomorrow (Wednesday), they’ll probably be excited to be inside, but disappointed they’re not outside running their stuff,” Ibero said.

He said he will just have to switch gears with practice if the weather does as forecasted.

“We will just work on music and some of those things that maybe have gotten away from us a little bit. We will try to go beyond just the notes and rhythm and take some time to work on dynamics and work on the phrasing a little bit. It’s just a chance to kind of make it make it more musical and less and less mechanical,” he said.

Ibero said the community seems excited to have the competition back to its old format on Saturday. The schools will again march through downtown Scottsbluff to Bearcat Stadium.

“When we’re over (at Bluffs Middle School) mid-morning and marching around in the avenues, we always have people following us over there. I’ve had several parents and (community members) say, ‘Hey, when is Old West Weekend? We are really excited to go see it again this year.’ I think the community and parents are excited to not only see their bands but to see all of the bands this year and to get that chance again,” he said.

The SHS marching band will pay the school’s fight song as it marches through downtown, but have an exciting set for the field competition, Ibero said.

“For our field show, we’re doing music from ‘James Bond.’ The timing was really right certainly with the last Daniel Craig ‘Bond’ movie coming out just last week. There’s a little bit of hype from that. The music is so iconic and has that sense of daring and adventure. It’s kind of nice to have a little bit of that and being able to play the music and try to convey some of that daring and adventure,” he said.

“This year is almost like a fresh new year because it’s not just, ‘What did we do last year?’ It’s, ‘Wait. How did we do this two years ago?’ It’s from everything to just the logistics of moving this equipment there. How does this work in the parade lineup for Old West to football games? Where do we sit? How do we do this at this quarter? That’s how everything this year has kind of been. I’ve had to kind of check myself a few times, going ‘Oh yeah, how did we do that two years ago?

“I think it’s a little bit of a reset this year. We’ve got to re-establish that this is how this is done. You almost have to treat everyone like they’ve never done it before or they’ve forgotten,” he said.

The Old West Weekend parade starts at 10 a.m. and will include eight middle and high school bands. The bands will march downtown starting at 15th Street and will end at Bluffs Middle School.

Face masks are not required, but fans are encouraged to practice social distancing by sitting within their family units.

It was a crisp 34-degree morning as Northfield students eagerly ran to the playground around 7:20 a.m. Thursday to officially complete their 3…

The Nebraska Association of School Boards and Gov. Pete Ricketts said threats and acts of violence against school officials should be dealt with by local law enforcement, not the federal government.

SIDNEY - The C.A. Story Foundation is now accepting applications for 2021 grants. This foundation was founded by C.A. Story, a former insuranc…

Bailey Nikont plays the flute during a weather-shortened practice for the Old West Marching Band Competition on Tuesday, Oct. 12.

Scottsbluff High School band teacher Frank Ibero gives directions to his students during a practice that was cut short because of the weather on Tuesday, Oct. 12.